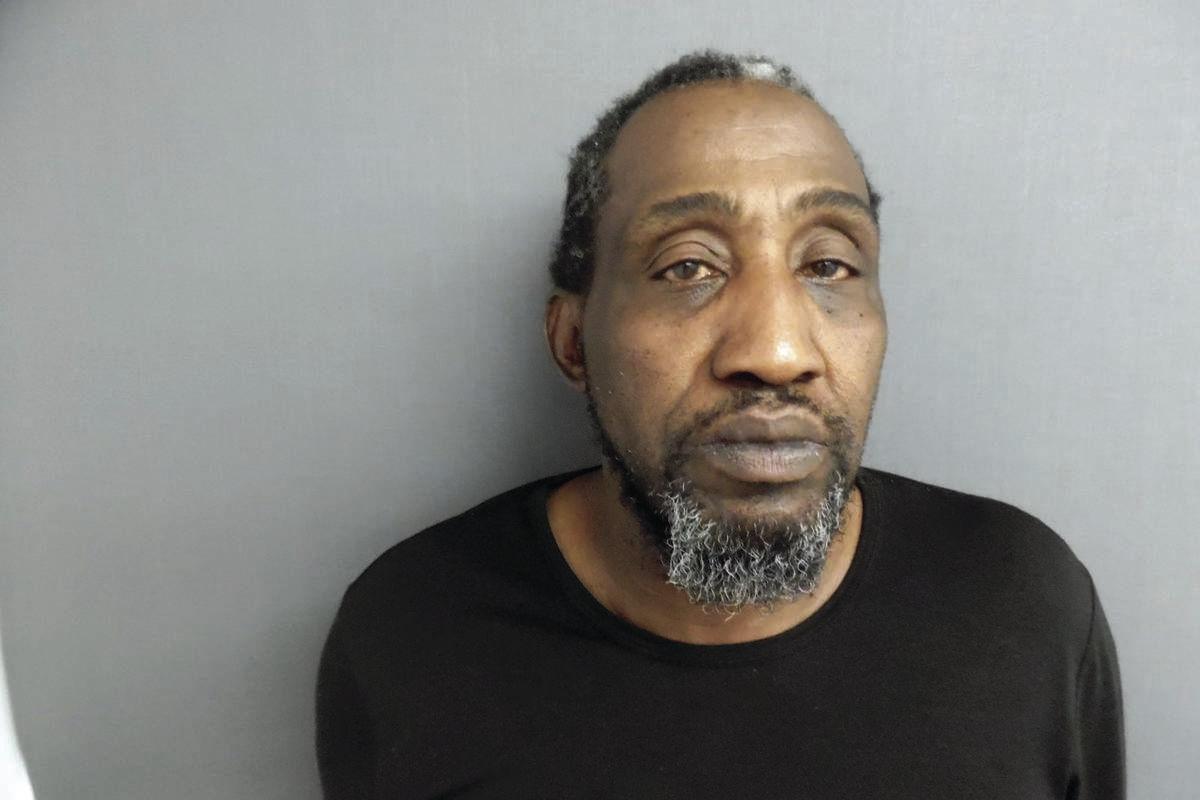 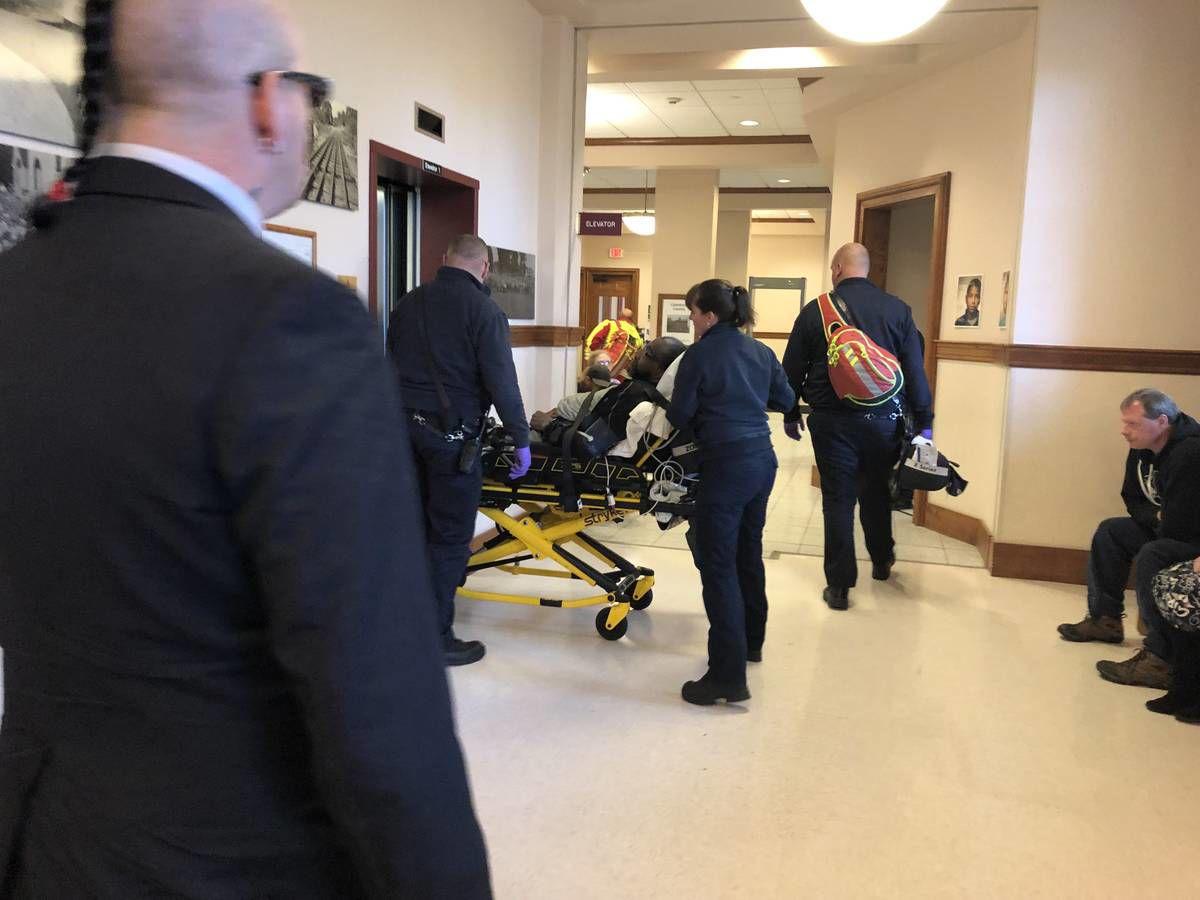 Defendant Kenneth Johnson is transported by EMS personal from the Caledonia County Court House in St. Johnsbury on Monday, Sept. 30, 2019. Johnson, who is being held without bail pending charges of human trafficking and sexual assault on a minor, had been in court for a status conference on Monday where he told the court he was unhappy with his court appointed defense attorney. Johnson then returned to the defendant holding cell on a lower floor of the court house where he then complained of chest pains. Johnson was transported to Northeast Regional Hospital. According to the Vermont Department of Corrections, Johnson is now back in his cell at Northeast Regional Correctional Facility in St. Johnsbury. (Photo By Todd Wellington).

Defendant Kenneth Johnson is transported by EMS personal from the Caledonia County Court House in St. Johnsbury on Monday, Sept. 30, 2019. Johnson, who is being held without bail pending charges of human trafficking and sexual assault on a minor, had been in court for a status conference on Monday where he told the court he was unhappy with his court appointed defense attorney. Johnson then returned to the defendant holding cell on a lower floor of the court house where he then complained of chest pains. Johnson was transported to Northeast Regional Hospital. According to the Vermont Department of Corrections, Johnson is now back in his cell at Northeast Regional Correctional Facility in St. Johnsbury. (Photo By Todd Wellington).

The Vermont Department of Corrections announced the death of Kenneth Johnson, 60, at the Northern State Correctional Facility. He was transported to the hospital and was pronounced dead at approximately 3:30 a.m. on Saturday. Currently, the cause of death appears to be natural causes.

Kenneth Johnson is a 60-year old male who was held without bail pending charges for Human Trafficking Compelled Commercial Sex Act, Sexual Assault – Victim under 16, and Aggravated Human Trafficking – Child Under 18 Years of Age. Johnson had been incarcerated since Sept. 23, 2017.

Johnson was taken from the Caledonia County Courthouse by EMS workers after complaining of chest pains during a court hearing in early October. Johnson was in court at the time for a pre-trial conference just prior to the intended start of a jury trial scheduled October.

Johnson told the court he was unhappy with his court appointed defense attorney and requested a new one. After the hearing, Johnson was returned to a holding cell on a lower floor of the court house where he then complained of chest pains.

Crews from the St. Johnsbury Fire Department and CALEX Ambulance responded and transported Johnson to Northeastern Vermont Regional Hospital. He was later returned to prison and the court postponed his trial to hold a hearing on his request for a new lawyer.

Johnson and another New York man, Harry S. “Eyez” Williams, 43, were accused in September 2017 of human trafficking by picking up a 15-year-old school girl in Lyndonville and repeatedly paying her to have sex. Both pleaded not guilty to the charges.

In August, Williams changed his plea to guilty to multiple charges in exchange for a sentence of 15-30 years — all suspended except for eight years with credit for time served, sex offender conditions of probation and $588 in court surcharges, but later told the court he wanted to withdraw his plea agreement telling the court that he didn’t know his release date could be affected by his conduct in prison such as fighting or not completing programming.

Johnson’s next of kin have been notified of his death. The Vermont Defender General’s Office and the Vermont State Police have been notified. In accordance with DOC Directive #353 - Terminal Illness and Inmate Death, the Health Services Director will conduct an administrative and clinical review of the event.

To begin with Kenneth Johnson complained at about 815 Friday evening I was on the phone speaking to an inmate that is currently in the medical. I spoke to this inmate that’s in medical for on three separate times that evening from 815 to about 11 o’clock I heard, Kenneth Johnson gasping for air telling the medical staff he needs to go to the hospital he doesn’t feel good. There are two men that are presently in there. When nurse that came in said if you don’t stop complaining you’re gonna sit at the AC. That was after 11 o’clock. So the two inmates were watching TV till about 2:15 in the morning they both looked at each other and said we need to go to bed let’s check on Kenneth Johnson big checked on Kenneth Johnson because I didn’t hear him gasping for air that was about 215 when the inmates tapped on the window to get the nurses attention told him that he had died they didn’t check on him. Before 11 o’clock that evening nurse practitioner Sabin Watson said oh it’s nothing per another nurse saying this to the inmates stating oh it’s nothing give him a Benadryl. So when the inmates home that he had passed they were both placed in different cells. From talking to both of them The staff including the superintendent that was notified were running around crazy frantically. I don’t care if they’re an inmate where is the humanity in there just because you don’t believe them and if he sounds horrible and needs medical attention they should have got the medical attention that he needed because it should never of ever happened to this inmate.

Corrections what is going to sweep this under the carpet just like they do with everything else they need to really speak to goes to other inmates that are in there. I was on the phone with one of them on three different occasions that night from 810 815 to 11 o’clock that evening I heard what was going on there I heard the commotion going on. What needs to happen is a big investigation in this Newport Jail because it’s corrupt from the Superintend it all the way down to the correctional officers and what a bum stating to people if you give me $500 I’ll bring you anything you want that’s been notified and talk to the caseworker and they’ll just sweep it under the carpet as usual. That place in Newport Vermont is corrupt and if someone overlooks is deaf and they are you’re just as corrupt as them it’s called negligence on nurse and a nurse practitioner. But still people in there not getting their medications and written their caseworker for 6 1/2 weeks spoke to the director of nursing that this person needs to have medication. How can they supersede another doctor from the outside that this person’s been on medication for a very long time for heart attacks strokes and diabetes this is another person that’s in the infirmary that still hasn’t gotten his medication.

The state of Vermont is corrupt they always find somebody else to take the fall for them and they circle wagons constantly that’s what the state of Vermont has turned into a corrupt state from judges to Jail‘s to law-enforcement.

All calls from these correctional facilities are recorded. If an investigation is done, and those things you say you heard on your phone calls actually happened then those recordings can be obtained as evidence.

They sure are recorded , and I spoke to the Superintendent Tuesday, And he was less then professional. I told him that my husband was on the phone with me from a little after 8:00 pm to 11:00 am. They lie in there and retaliate against the inmate like one nurse did to my husband. She went off yelling at him, and what did I do I taped the phone call with her going crazy nuts yelling at my husband. So, when I did speak to superintendent Rutherford, I also stated that they do retaliate and he stated " No we don't ", I said sure right. Well after this call on 12/10/2019 at 2:17 pm , by 3:00 pm my husband was shiped to Springfield. I have the tapped conversation with the nurse and like you said , supposedly all calls are taped, they should play them from Friday, I do have the times when he called, and you can hear this man gasping for air asking for help . The nurses didn't believe him. He also fell on the floor , that my husband and another helped to get up.

I have called the Governors Office , Prisoners Rights, A investigator from Prisoners Rights called the jail at 3;55 pm but was already shipped. She will be contacting him today 12/11, And his my husbands Private Attorney has been notified.

Corrections will just like make up stories, like they just like what has happened in the woman's jail. Phone calls and taped recordings do not. I have asked for a investigation . I get Vt is all about punishment but with all the liberal s that reside here in Vermont how can people turn the other cheek, I got it Vermont is all about punishment , and the legislation is in no hurry to change anything for inmates or for the jails.

Like I said in the previous comment about , I told the superintendent that they have some real big problems there, real big. Like was told in Visting 2 weeks ago there is another guard who tells inmates that if you give him 500 dollars he will bring in anything you want. I email my husbands case worker nothing is done. I have so many emails to her and she does absolutely nothing.