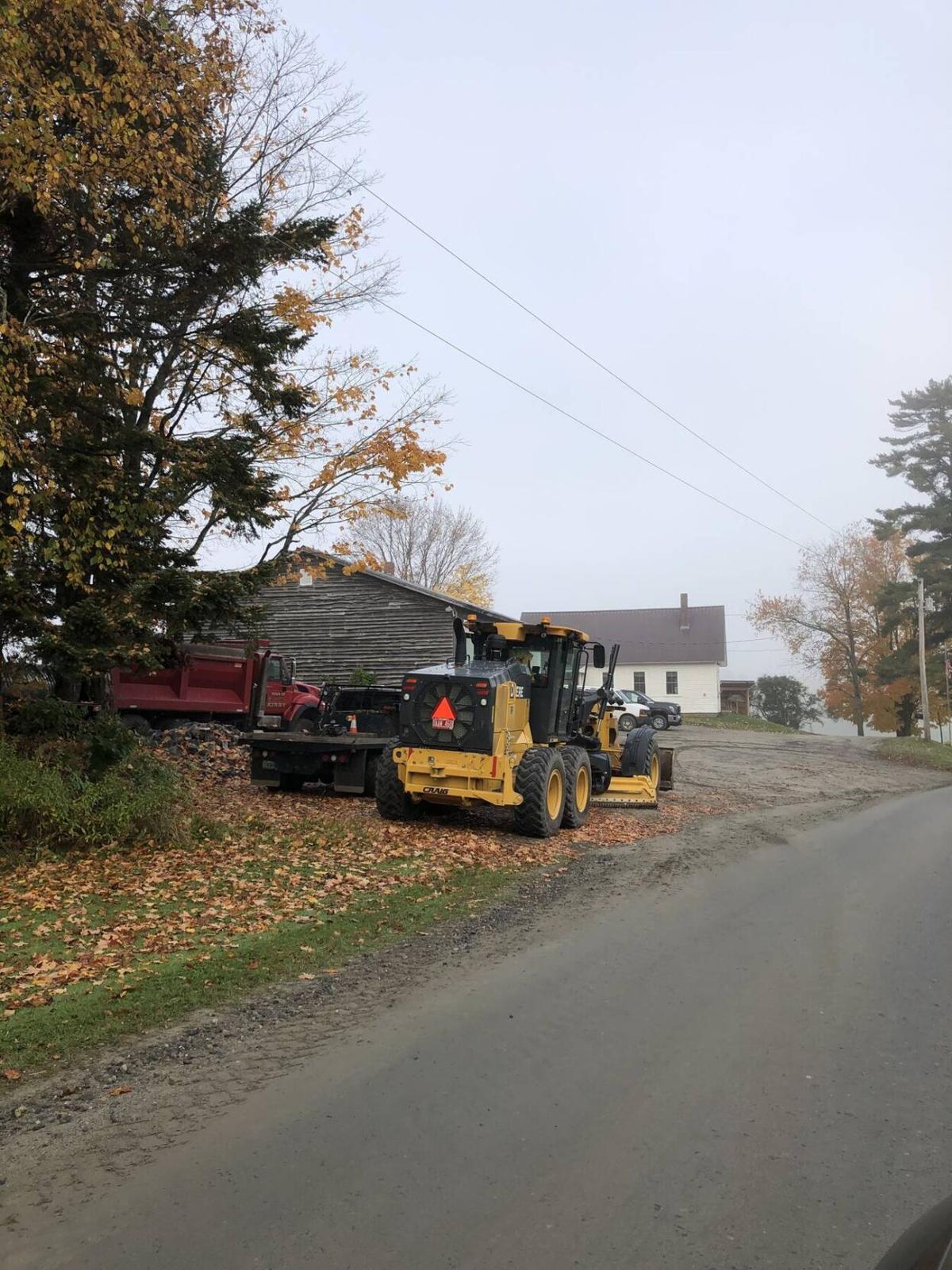 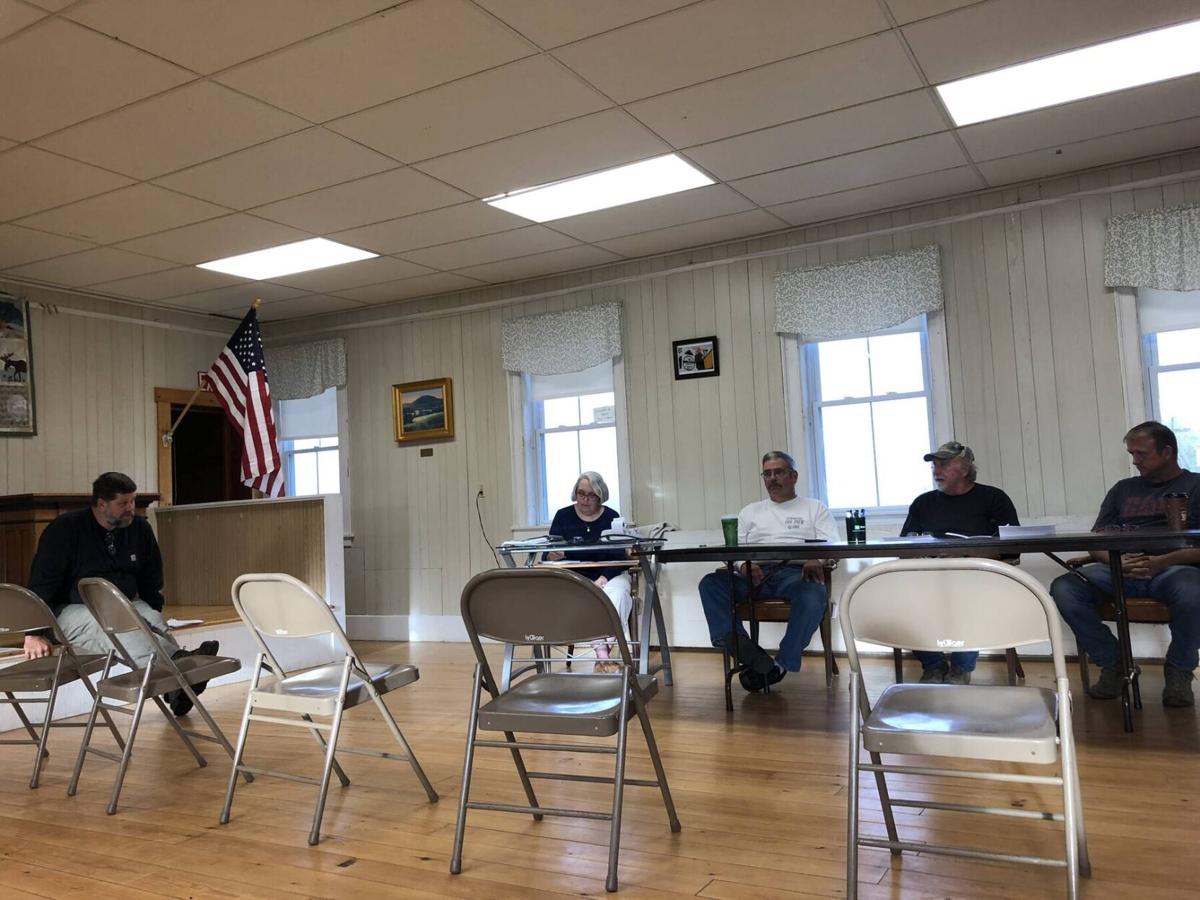 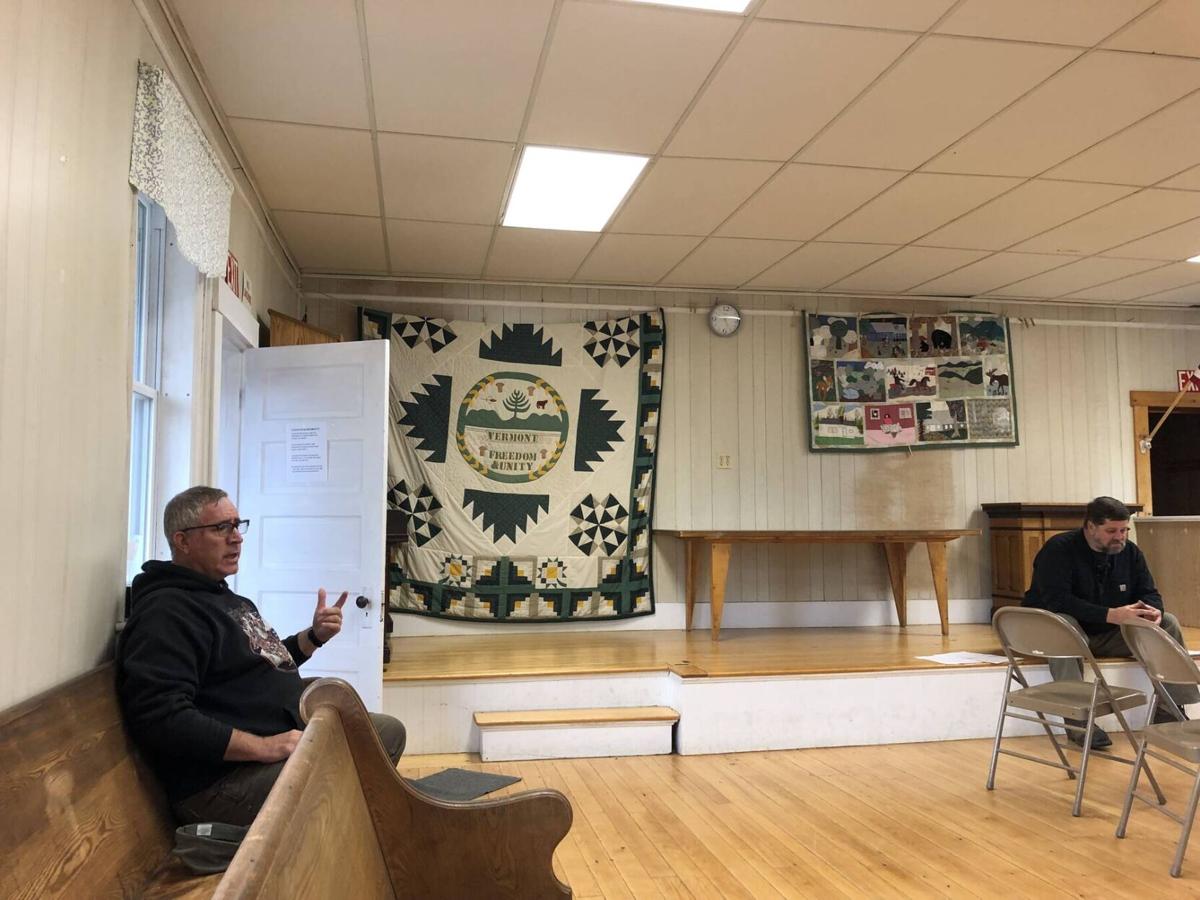 East Haven selectman Roddy Loynd, at left, speaks during a special Kirby Select Board meeting on Tuesday morning, where John Ohina, right, the town's road foreman, was asked to share his thoughts on the board's desire to add a second road crew employee to work under him. (Photo by Amy Ash Nixon)

East Haven selectman Roddy Loynd, at left, speaks during a special Kirby Select Board meeting on Tuesday morning, where John Ohina, right, the town's road foreman, was asked to share his thoughts on the board's desire to add a second road crew employee to work under him. (Photo by Amy Ash Nixon)

KIRBY — The Select Board unanimously advanced efforts to hire a second town road crew employee during a special meeting Tuesday morning. The board cited safety as the chief issue.

Roddy Loynd - an East Haven selectman who also has worked part-time there on the road crew — attended the early morning meeting at the Kirby Town Hall to offer any backup help as a stop-gap measure if Kirby Road Foreman John Ohina is in a pinch, or during summer projects if the town needs another pair of hands.

Loynd said the need for trained road crew personnel and short supply of applicants, is not a one-town only challenge, but described it as a regional concern, and one he suggested at some point may require a regional solution, and towns banding together to address road needs.

He told the Kirby selectmen that when the town of East Haven advertised for a road worker a year ago, they didn’t get a single inquiry.

At the Kirby Select Board’s meeting last week, the issue was raised, and board Chairman Keith Isham at the outset of Tuesday morning’s meeting explained briefly to Ohina that since he had not been at that meeting, the board called the special meeting to discuss the idea of adding a second crew member with him first.

Selectman John Morse said he would want Ohina to be part of the hiring process, saying “He’s going to have to work with him and deal with the experience or inexperience.”

Ohina said he would look at an applicant’s qualifications, along with their track record, “I’ll give him direction … I’ve done it before.”

Selectman Mike Bickford noted that the town has thus far this year paid out $25,000 for contracting according to figures the town clerk, Wanda Grant, provided in advance of the meeting. He estimated that the town has spent twice that figure over the past two summers, saying factoring those costs for outside help into the consideration of a second road crew worker’s salary needed to be weighed in.

Of the costs to add a second worker, and more equipment, including a trailer for an excavator, Ohina said, “It’s a lot of numbers if you put it all together, the man, the machine and all of that … I’m not saying it’s a bad idea, but we’ve got a lot of new stuff that needs to be paid down.”

Isham suggested the board first look to find someone, then later return to the discussion of an excavator for the town.

Ohina was asked if he felt there was enough work for a second person during the summer and he said he didn’t believe so.

“In the winter time, it’s a different story,” added Bickford, who said the position would need to be versatile to “justify the second guy” and keep him busy year-round.

Bickford said possibly the town could find someone who “would be willing to help out in the winter time … you’ve got guys out there who are retiring that want a little bit of extra money, too … they’re out there.”

Bringing a second road crew employee up to speed to succeed Ohina and be well trained by the time he does retire was part of last week’s discussion by the board.

Morse said it could be possible that Ohina would one day step into a part-time role on the crew, after he retires from full-time work, if he so chooses at that juncture.

Morse stressed that safety concerns are the chief reason he had raised the issue of bringing on a second man last week, and he echoed that concern, saying he’s surprised the insurance carrier hasn’t brought that up, and he feared something happening at 2 a.m. with a lone town road foreman who could get hurt and need help and be waiting for someone to find him.

The town will begin advertising soon for a road crew worker, with pay to be based on experience, the board noted in helping to word what the ad should say.

Isham said, “It may cost us a little bit to begin with, but in the long run, we’ve got to be prepared.”

“If something happens to John, we’re screwed,” added Morse, saying in his business, “I like to have a backup plan, and right now, we don’t have one.”

After the board voted unanimously to seek a second road crew worker, Loynd, the East Haven selectman, who read about the Kirby meeting in the newspaper and decided to drive over and attend, said, “There’s just not a lot of people … it’s not just running a dump truck up the road.”

Loynd said, “Every single town up here is facing the same thing. These are the pressures that the whole area feels, there aren’t many guys who can step into the job and do it … every community is doing the same thing.”

During the pandemic, Loynd said there were discussions across towns about how they could help one another and what they would do if a road foreman or crew member had to quarantine due to COVID, for example, “to keep the trucks on the road … that discussion was held up here by a lot of people.”