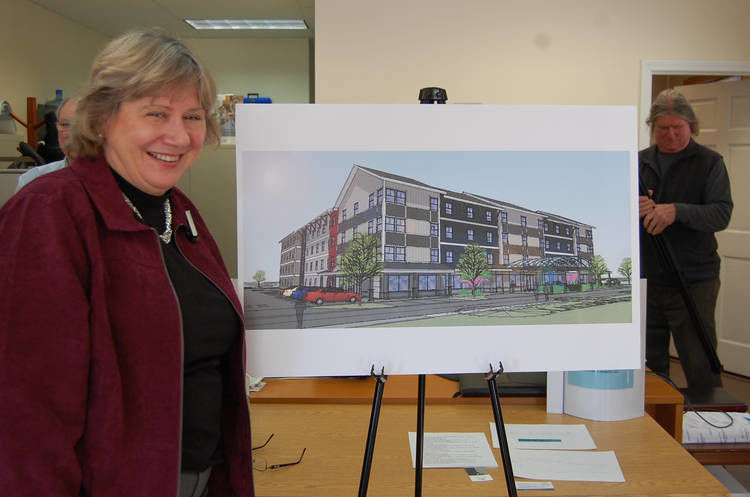 Heidi Eichenberger on Thursday stands next to the current design for the Lakemont Retirement Community, which she plans to build on Lakemont Road in Newport City. (Photo by Robin Smith) 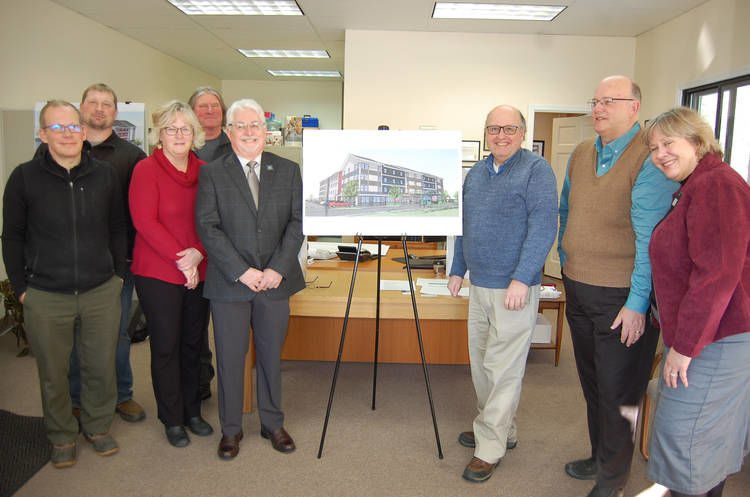 Heidi Eichenberger on Thursday stands next to the current design for the Lakemont Retirement Community, which she plans to build on Lakemont Road in Newport City. (Photo by Robin Smith)

She hopes to tap into a newly created “opportunity zone” in Newport City that would allow people who sell property to invest and defer capital gains taxes into the future and also reduce the tax burden over time.

If all goes well with investments and permitting, construction could begin on Lakemont Retirement Community in the spring and be completed in October, said Eichenberger this week.

It’s a unique development for Vermont that has support from Newport City Mayor Paul Monette, Jon Freeman, president of Northern Community Investment Corp., and others working in the accounting, construction and banking industries.

“I look at this as ideal,” Monette said Thursday when some of the supporters and people working with Eichenberger on the project gathered at her office at the Hearing Center of Vermont on the Derby Road.

“This is a project that absolutely needs to get done here,” said Eichenberger, noting the lack of retirement housing in the area.

The city recently changed the zoning in what was the Lakemont Industrial Park from light industrial uses to hospital and offices, opening the way for the Lakemont Retirement Community.

The industrial park has never been fully developed, the mayor said. He welcomes this project as a good fit for the city, located near North Country Hospital and next to the Beebe Spur rail trail bike path.

Eichenberger wants to build a four-story building on about 13 acres with as many as 190 independent-living apartments of different sizes plus assisted living apartments and short-term rehabilitation services.

The complex would feature a restaurant, bar with solarium, dining rooms, general store, library, in house nurse, laundry, hair dresser, a hearing center, and other facilities.

It would be pet friendly, Eichenberger said.

Her theory on pets in retirement communities is: “If you can’t see, smell or hear them, you can keep them,” she said.

One wing of the U-shaped building would be for studio apartments for people who qualify for public assistance. The wing on the other side will feature private studio and one-bedroom and two-bedroom apartments. These public and private independent living apartments will have kitchenettes.

The complex would be next door to Northeast Kingdom Physical Therapy, and the developer is designing a year-round walkable access to that facility for residents.

The front of the building will be kept forested, due to wetland areas, Dreher said. That keeps the rural nature of the property intact and adds the potential for walkways for residents. The developer has to maintain a 50-foot buffer zone between the wetlands and any developed areas.

The project is planned for an area where expansion is possible. Eichenberger could add another wing and she envisions the construction of a small neighborhood of retirement homes nearby.

Eichenberger has more than 20 years of experience in this area. She developed, built and operated two similar retirement communities, including the Manoir Lac Brome in Knowlton, Quebec and one near Ottawa. She and architect Paul Dreher likened it to the Riverglen House in Littleton, N.H., and another retirement community complex in Bradford.

They are working on attracting investments for the initial work of engineering and permitting, said Patrick Martell of NCIC.

Freeman said he joined those working with Eichenberger at the request of Hope Colburn, vice president for the commercial lending division of Community National Bank.

Freeman said he is talking with federal agencies like the U.S. Department of Agriculture Rural Development about grants and loan possibilities.

The retirement community project is unique in this area and in another way to Vermont.

There are no others like it within 75 miles on this side of the U.S.-Canadian border, Dreher said.

And it is the first large project to be proposed for one of Vermont’s 25 “opportunity zones.” There are thousands nationwide but the law that created these zones is new. There are two other zones in the Northeast Kingdom in Lyndonvile and St. Johnsbury.

Eichenberger said she initially looked at developing the project in Derby but switched to Newport City when she learned about the opportunity zone here. She created Lakemont Investment LLC to take advantage of this special zone.

The zone allows investors who sell property to invest their capital gains into the project and defer capital gains taxes for years and also see some tax breaks on the investment, according to Stephen Trenholm, certified public accountant with Gallagher, Flynn & Company.

They also will have secured investments, Eichenberger said.

He explained how the opportunity zone works, noting that the project can attract investors from across the U.S. and even Canada.

Eichenberger said she will need investments of 25 percent of the $22 million total cost to build and open the facility.

Dreher said they will seek city permits soon and then Act 250 permitting.

Construction would go quickly once funded and approved because she is planning a modular project, with whole sections being made and delivered ready to put in place.