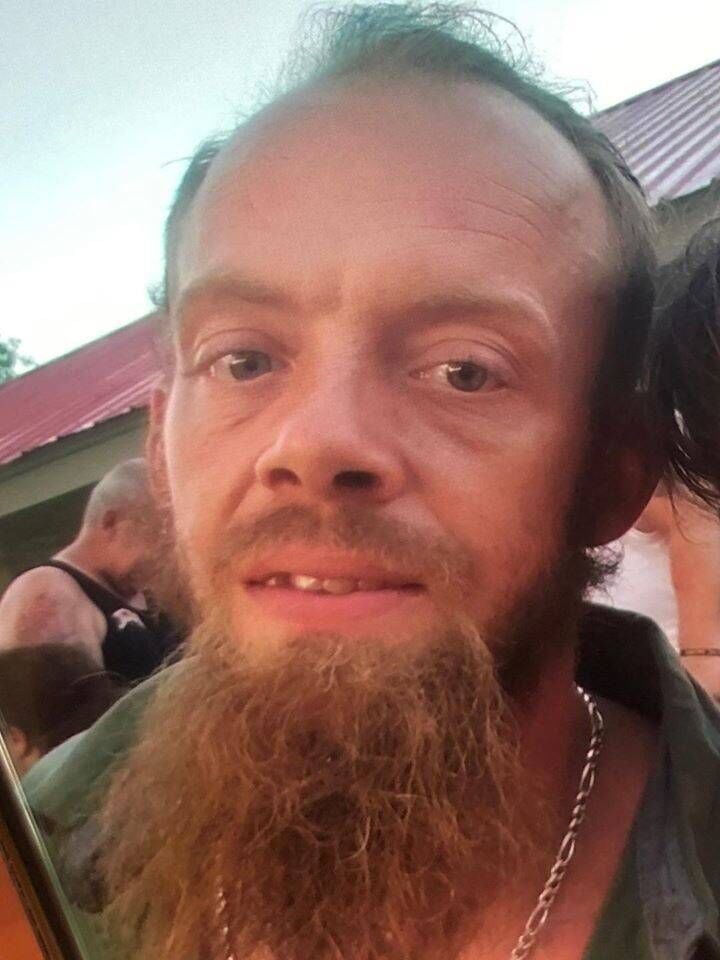 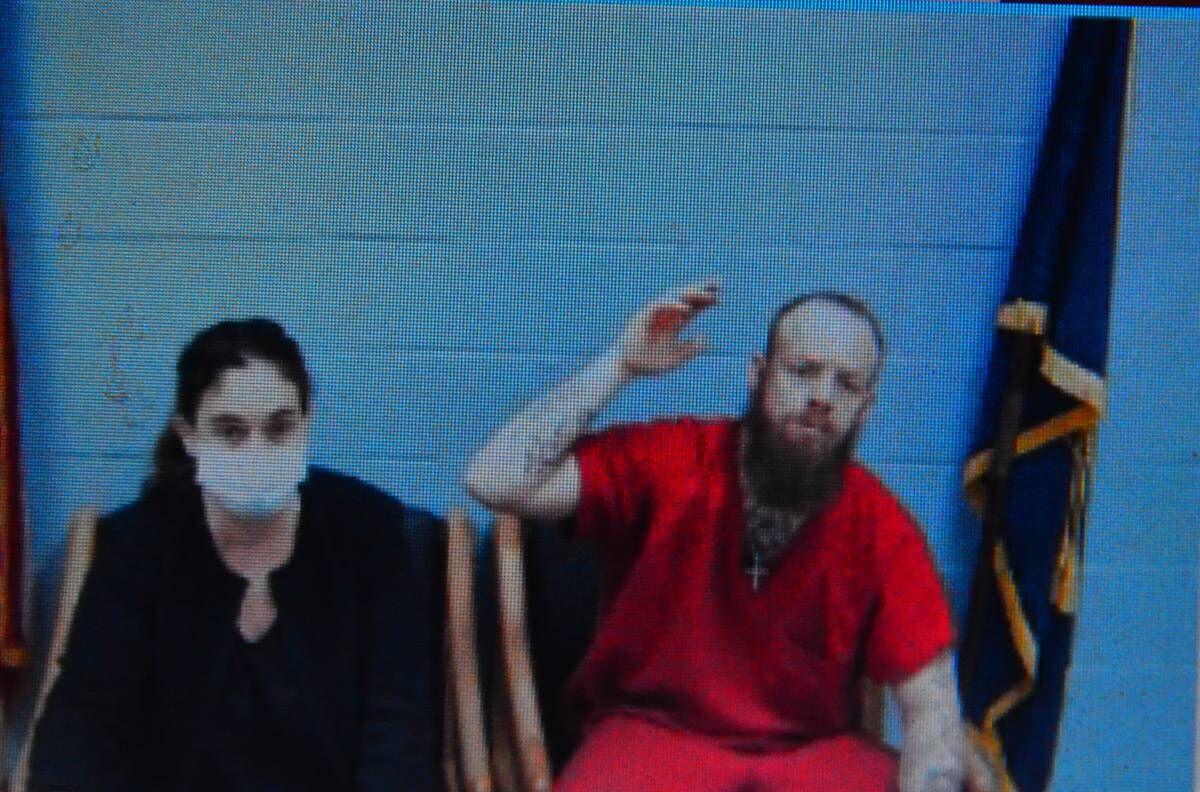 Duane Masters, sentenced to 6 to 12 years in New Hampshire State Prison for a rolling domestic violence incident in Littleton and Bethlehem that involved a gun and a violent assault, addresses the judge during his plea and sentencing by video on Thursday at Grafton Superior Court.

Duane Masters, sentenced to 6 to 12 years in New Hampshire State Prison for a rolling domestic violence incident in Littleton and Bethlehem that involved a gun and a violent assault, addresses the judge during his plea and sentencing by video on Thursday at Grafton Superior Court.

The man arrested last year for a rolling domestic violence incident during which he forced his intimate partner and her two young daughters into a car at gunpoint and left Littleton for Bethlehem has been sentenced to prison.

Pleading guilty to six charges, two of them felonies, was Duane Masters, 36, of Waterville, Maine, who was given a total of 6 to 12 years in New Hampshire State Prison during his plea and sentencing hearing by video on Thursday morning at Grafton Superior Court.

Giving testimony to the judge was the victim, of North Haverhill, who said Masters conned her into thinking he was not a drug user or violent.

“I stood between Mr. Masters and my children with a pistol to my head and I was not afraid,” she said. “I faced him … like a mother bear protecting her children until I was rendered unconscious … Then, when I regained consciousness and struggled to get my youngest daughter from him as he tried to drive away with her, I faced that loaded gun chamber … four times that night … This all happened because I loved you. Shame on us both.”

The incident began at about 10:30 p.m. on June 20 in Littleton, at the Eastgate Motor Inn, where the victim and her two young daughters, ages 5 and 11, had been placed by The Burch House domestic violence shelter, said the prosecutor, Assistant Grafton County Attorney Amanda Jacobson, in presenting the offer of proof to the judge.

A third party witnessed a domestic disturbance in a vehicle in Bethlehem at Main and Arlington streets and called 911.

“They reported seeing a gold-colored SUV in the middle of the roadway, a crying female, and a child alleging that mommy’s boyfriend was going to hurt them,” said Jacobson.

Responding was Bethlehem Police Officer Kelby Lewis, who glimpsed Masters shortly before he took off into the woods.

The SUV was gone.

An hour later, with the victim back at the Eastgate, police received the call of the incident.

Earlier that day, Masters had called the woman and demanded she pick him up from the Gale River Campground in Bethlehem, where he had been staying, and bring him back to the Eastgate for a cookout, said Jacobson.

When the cookout ended, he wanted her and her two children to go to the campground with him, but the children did not want to leave the motel room.

Ultimately, they did all leave, with the victim driving, the children in the back, and Masters in the passenger seat and in possession of the woman’s .22-caliber pistol, a violation of the law because he has a burglary conviction from Kentucky that prohibits him from lawfully possessing a firearm, said Jacobson.

As they drove toward Bethlehem, the youngest child began to cry.

A physical altercation broke out when Masters told her to stop crying and the mother told him to stop yelling at her children.

Given that altercation, the oldest child attempted to call 911, but Masters grabbed her phone, after which she tried to grab it back, said Jacobson.

“[The victim] jammed the vehicle into park at this time and [the eldest daughter] ended up outside the vehicle and ran toward a vehicle on the road in an attempt to stop a third party for help,” said Jacobson. “[The victim] also exited the vehicle at this time. As she rounded the corner [to] the passenger side … Mr. Masters pushed her to the ground. She fell on her back and he proceeded to punch her in the head. [She] lost consciousness and suffered bruising and swelling to the left side of her head.”

Masters ran into the woods with the gun and ultimately remained at large for more than a month, until July 28, when he was arrested in Vermont on a warrant from Littleton Police Department for the case, she said.

After Masters fled into the woods from Bethlehem police and a subsequent search of the area was unsuccessful, Littleton police issued an alert stating that Masters might still be at large in the area and is considered armed and dangerous.

On July 31, three days after his arrest and now in jail, Jacobson said Masters called the victim on the telephone at the Grafton County House of Corrections and “told her to recant as much as she could to help get these charges lifted.”

That call resulted in a Class B felony count of tampering with a witness, filed Feb. 2, to which Masters pleaded guilty for the first 3- to 6-year prison sentence.

The second 3- to 6-year sentence to run consecutive to the first is for a Class B felony count of being a felon in unlawful possession of a weapon.

He is also sentenced to a Class A misdemeanor count each of domestic violence stalking (for making the telephone call when he was prohibited from contacting the victim), domestic violence, and obstructing the report of a crime, each carrying a sentence of 12 months, that will be served in prison and concurrent with the felony charges.

In addition, Masters was sentenced to 7 1/2 to 15 years on a Class A felony count of theft for stealing the gun, but that prison sentence will be suspended on condition of good behavior for the next 10 years.

Masters is also required to pay $479 in restitution and $987 for the victim’s medical bill from Littleton Regional Healthcare.

In addition, the court will recommend he be screened for mental health and substance abuse issues and complete any programs as required. The court also recommends domestic violence and batterers intervention counseling.

Masters’ attorney, Emily Wynes, said her client wants to say he did not punch the woman but struck her with an open hand.

“When he is pleading guilty, he wants to make clear that is his own recollection,” she said.

Masters declined an opportunity to address the court or the victim.

The woman told Judge Lawrence MacCleod that the assault left her with a broken eye socket and blurry vision and her time with Masters left her with nothing, with money lost to Masters, and her children, who now have nightmares, being taken away from her and put into the custody of the state.

“You made an 11-year-old girl defend her mother,” she said, addressing Masters. “She stood up to you, even with a gun, and fought for me. She is in weekly counseling. She is saddened today to know that drugs made you do what you did. In her dreams, you are her nightmare, her mom’s killer.”

The victim said, “I was just another con, another mark. You never saw me, just what I could provide you. Then, when I tried to leave you, you fought … You had me conned that you were not a drug user … Shame on the thief, the drug addict, the violent man.”