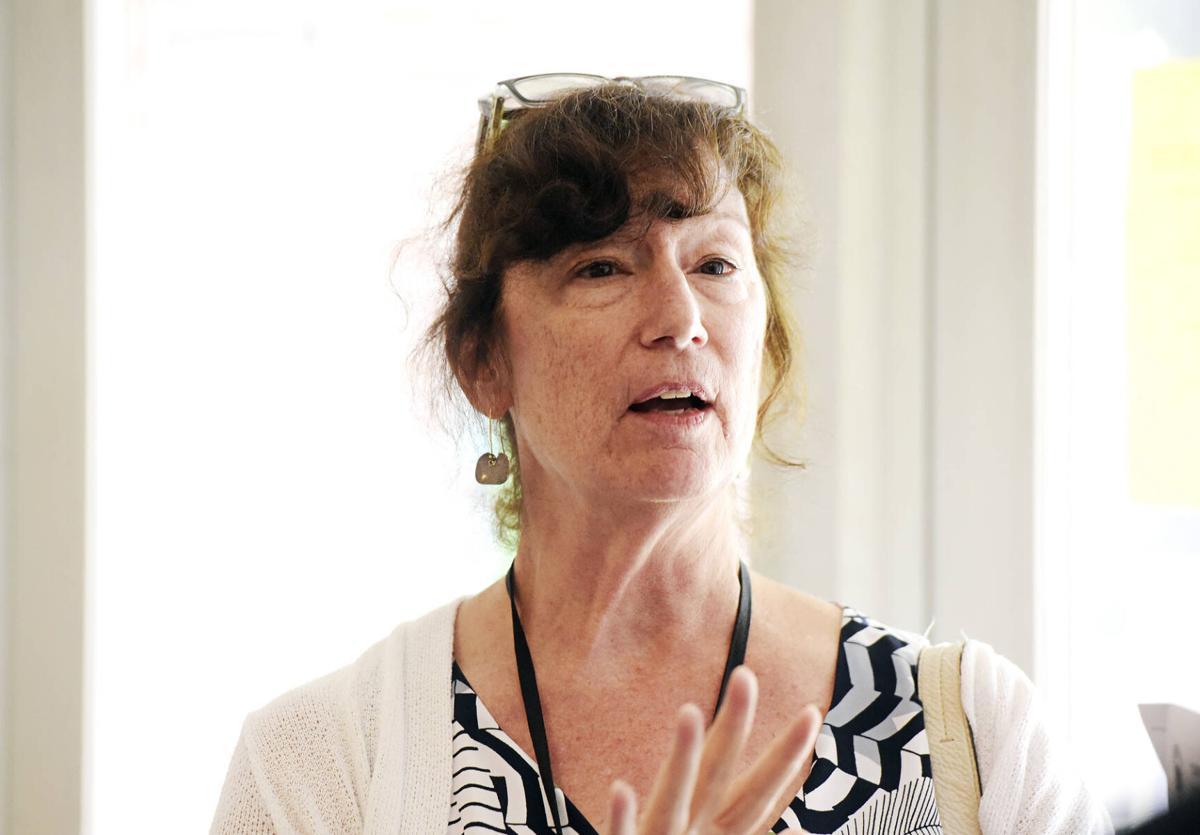 Northeast Kingdom Human Services representative Roseann Sbarra speaks with a group of residents following a Lyndon Board of Lister's meeting on Thursday, July 15, 2021. The residents expressed concerns about an NKHS transitional housing facility on Cornerstone Lane. (Photo by Paul Hayes) 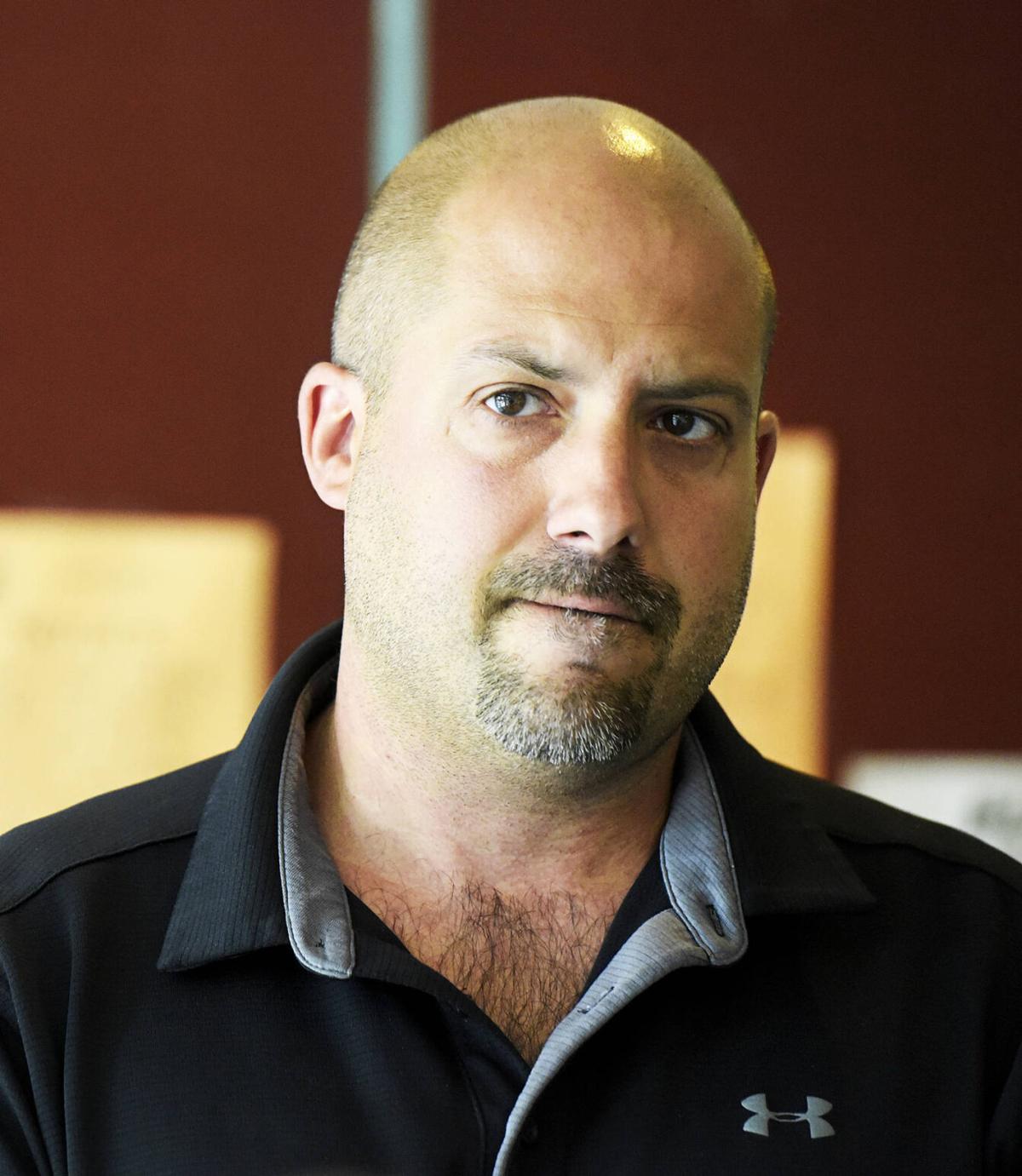 Northeast Kingdom Human Services representative Roseann Sbarra speaks with a group of residents following a Lyndon Board of Lister's meeting on Thursday, July 15, 2021. The residents expressed concerns about an NKHS transitional housing facility on Cornerstone Lane. (Photo by Paul Hayes)

Sharon Ryan, Chief of IDDS, thought the former Fold Ministries campus on Cornerstone Lane was a perfect solution: A three-building facility that could provide a combination of short- and long-term housing for up to eight IDDS clients.

“This is going to be a wonderful location for the people that we are serving,” she said.

However, the project faces push-back.

Nearly a dozen residents have formed a group, Vail Action Alliance, to oppose the project on the grounds it would place potentially dangerous people, such as registered sex offenders and former convicts, in close proximity to their homes.

Heightening their concerns, they said NKHS was intentionally secretive about the project, failing to communicate their plans to neighbors and law enforcement, and neglecting to obtain the proper town permits (which would have triggered abutter notification).

Members of VAA claim they didn’t learn project details until last week — after the first client was already on-premises.

“Extremely alarmed is how we all feel,” said VAA co-founder Travis Glodgett.

NKHS characterized the communication and permitting issues as “oversights,” which they plan to address.

The non-profit intends to meet with residents in the near future, and expect to submit a change of use permit application to the Lyndon Zoning and Planning office by Wednesday. They have also submitted plans to the District Environmental Commission, to determine if Act 250 permits are required.

Said NKHS representative Roseann Sbarra, “That was our mistake and we’re trying to make good on that.”

Northeast Kingdom Human Services is the designated social services agency for the region, and its IDDS program serves approximately 330 clients (at any given time) in Orleans, Essex and Caledonia Counties.

“We have really wanted this opportunity to have a crisis home that we can manage, that is a welcoming location, that will be staffed with trained employees,” she said. It’s the first IDDS owned and operated facility. “We’re just really excited about this. This is going to be a wonderful addition to the IDDS program.”

In addition, Ryan said, it will also include administrative space and a lifeline call center.

“We’re running out of office space at all of the locations at NKHS. What we’re looking for is for that to be more of an administrative office space,” she said.

It’s unclear why NKHS did not obtain the required town permits.

Last week, Sbarra said she was told by State Fire Marshal Tim Angell that town permits were not required. Reached afterward, Angell denied making those comments. On Tuesday, Sbarra said emails had been exchanged with town officials early in the process but were not followed up on. Copies of those emails were requested, but were not provided by presstime.

Glodgett, the VAA co-founder, lives at the entrance to Cornerstone Lane.

For months, he saw development taking place on the property. He figured the previous owner, Fold Ministries, was making improvements. It wasn’t until last week that he learned NKHS had acquired the property, and for what.

Worried that IDDS clients could pose a threat to his family — including his wife and 11-year-old daughter — he contacted neighbors and town officials.

He recalled that clients of Fold Ministries, a home for troubled teens, occasionally walked off the property. He worried IDDS clients could do the same, with more serious consequences.

“What if somebody goes to any one of our homes and they decide to take refuge there? The town doesn’t have the resources to handle this if it gets out of hand,” Glodgett said.

On top of those concerns, Glodgett and others have accused NKHS of intentionally keeping quiet, to avoid opposition.

They questioned why NKHS did not notify neighbors, or state and local police, about the project.

Lyndon Police Chief Jack Harris said such a heads up was customary so that law enforcement can adjust their response accordingly.

He said a similar (non-NKHS) facility opened elsewhere in town without the department’s knowledge and “we found out when my officers had to go up there for someone out of control and an officer got attacked.”

Glodgett is also wary of facility staff, and their ability to contain a potentially violent resident, specifically those in the crisis unit.

NKHS staff, for the most part, rely on de-escalation techniques (only a few trained staffers are permitted to employ restraints).

To support his opinion, Glodgett pointed to a recently completed state investigation into NKHS, which found that the non-profit failed to meet standards in 7 of 12 categories, including staff training. They were placed on “provisional” status and ordered to submit a plan to correct those problems. Failure to do so could result in NKHS losing its state contract.

“The feedback that I’m hearing, [staffing] is a problem,” Glodgett said.

Interviewed on Tuesday, Ryan said the state investigation did not apply to the IDDS department. She said it covered the mental health side of Northeast Kingdom Human Services.

“We are the same agency, but [IDDS works] under a different umbrella of funding sources,” Ryan said.

Added Sbarra, “IDDS isn’t part of the complaint and the corrective action plan.”

According to Ryan, the residential facilities at Cornerstone Lane would be secure and staffed with trained, competent personnel. Clients would be supervises around-the-clock, she said.

Those in the long-term Licensed Therapeutic Community Residence unit could live there for many years, until they pass away or are transferred to a nursing home. Those in the short-term crisis unit would stay for just 1 or 2 nights in most instances, until they are treated and placed.

The crisis unit would have its own dedicated staff with specialized training, Ryan said. IDDS is in the process of developing policies, procedures and intake guidelines.

Once a crisis is managed, those individuals would be placed in a residential setting with adequate supports, she said.

Ryan said the Cornerstone Lane facility should not be viewed as a threat to the surrounding area.

Ryan and Sbarra said NKHS was not attempting to “sneak” the project through.

“I feel like, having experienced this and having heard these people, I would do it differently. I would reach out to them before we start construction and have the conversation with them,” Sbarra said.

They were also saddened to learn that local residents were “scared to death” of the Cornerstone Lane project.

“I want some of the neighbors of our existing residential facilities to come talk to these people about what their experiences have been,” Ryan said. “I’m not aware of any incident we have in [existing IDDS facilities] that comes close to what these people are afraid of.”

Moving ahead, NKHS will start the permitting process. A change of use permit hearing will be scheduled before the Lyndon Development Review Board. State officials will make a determination on an Act 250 permit. Under town regulations, Cornerstone Lane could not be staffed or occupied until permitting is complete.

Meanwhile, Ryan and Sbarra hope to have a conversation with VAA members at some point in the near future.

“I don’t want the neighbors to be fearful,” Ryan said.

Added Sbarra, “I want to make sure that we do everything we can to reassure them we are there for them, we intend to be good neighbors. We live in the same community as these people. We’re a tiny community. We run into them in the grocery store. My father lives in Lyndonville. I don’t want to be associated with anything that is in any way being a bad neighbor.”

However, it’s unclear how productive those talks will be.

Noted Glodgett, “I don’t trust any of them. It doesn’t mean I won’t hear them out. But they lied too much already.”

Glodgett said he didn’t oppose a facility for intellectually and developmentally disabled people outright, but was concerned by the nature of those slated for Cornerstone Lane’s crisis unit.

Speaking on behalf of the VAA members, he added, “I’m concerned what type of mental health clientele is going to be there. I don’t think that a residential neighborhood is the place to have crisis centers.”

LYNDON — The town will have its say.

The neighbors will feel very safe with people like Brian Hawkins. See yesterday's Caledonian. We need a real comprehensive facility, set up and properly staffed to serve this population that badly needs good help.