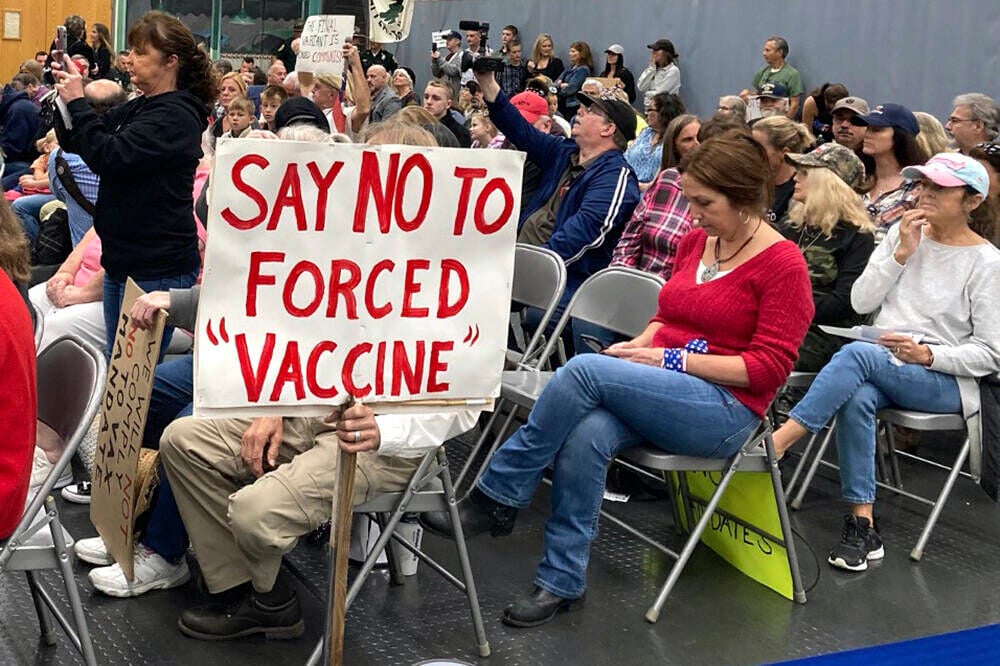 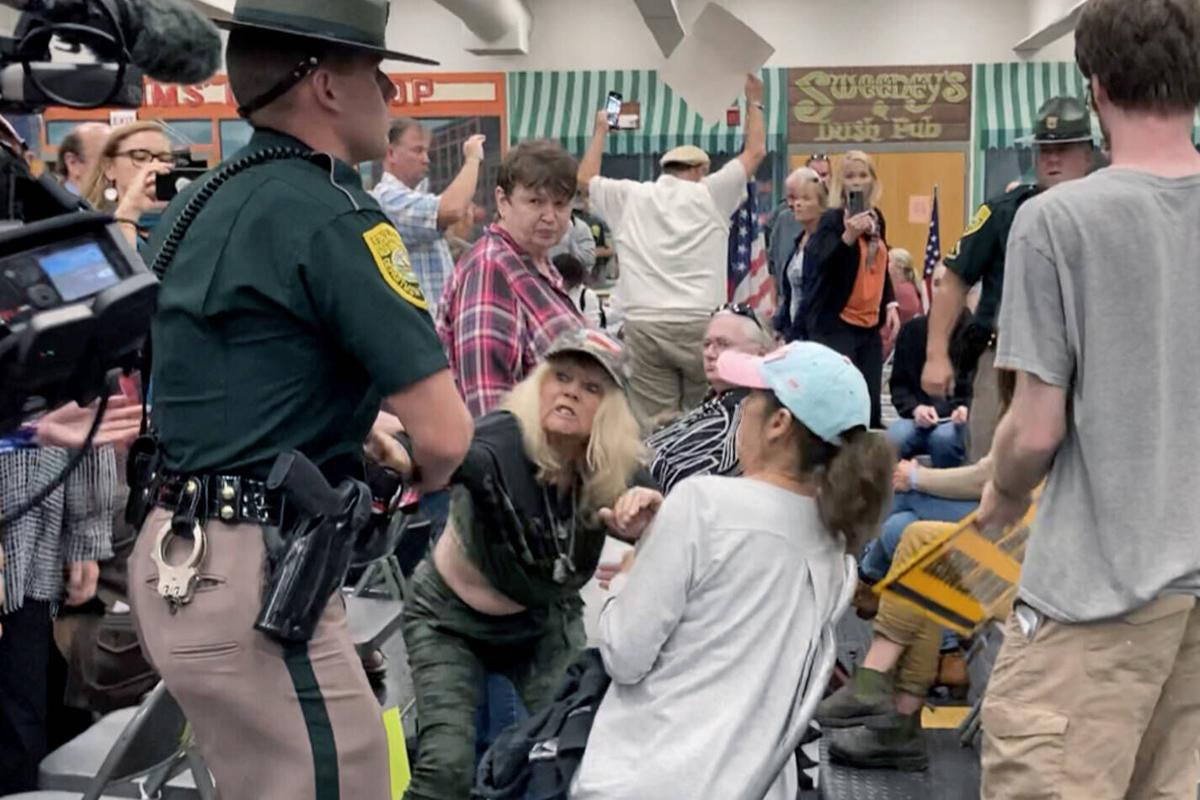 Joe Kenney, the North Country’s executive councilor, and his Republican colleagues on the council are under fire by some for rejecting $27 million in federal vaccine outreach money for New Hampshire.

Wednesday’s meeting at the police academy in Concord — a location chosen for added security following a planned council meeting at St. Anselm College on Sept. 29 that had to be canceled because of protesters against vaccine mandates — drew a packed house that included a good hundred anti-mandate protesters, nearly a dozen of whom had to be escorted out of the building by state police because of boisterous conduct.

On Thursday, Kenney gave his reasoning for his vote, his perspective on the increasing scrutiny on the Executive Council following some recent votes, and what he said is a growing and troubling trend of worsening civic discourse in New Hampshire.

Kenney, who in particular drew the ire of Republican Gov. Chris Sununu who wanted the state to accept the $27 million, joined his fellow Republican councilors in rejecting the federal money in a 4-1 vote along party lines.

The money, in two contracts of $4 million and $23 million each, would have helped fund health care workers to reach residents at home and vulnerable populations that to date haven’t been vaccinated.

While some critics of the vote say the federal money doesn’t carry vaccine mandates, Kenney is of the position that they do.

“I support vaccine choice and this particular contract we felt had federal mandates in it,” he said. “That’s the part of the contract that really concerned us, that if we take this money the federal government can force orders related to quarantining and isolation. They basically could come into our state and tell us that we have to quarantine and isolate. I think that was a bit of an overreach for the councilors who voted against the contract.”

Secondly, there was concern about a vaccine registry, which the New Hampshire Legislature needs to revisit and create an opt-in provision, said Kenney.

Another concern is the state has already given much money to the COVID-19 relief effort, including money to push some mobile vaccine clinics around the state, and likely in the North Country, which has had a recent spike in cases, he said.

“We’ve given a lot of money to this effort, from PSAs to delivery of vaccines to using the National Guard and our health care providers,” said Kenney. “We are aware that there is a lot of vaccine out there through Walgreens, CVS, and other locations. I think it was a watershed moment in my eyes. With these federal mandates and with the money we have spent up to this point, we need to step back and say are we spending this money effectively and wisely and is it being directed to where it needs to be directed.”

The council has pushed out a lot of money for the New Hampshire Department of Health and Human Services, for vaccines and beyond, but the concern this time around was the federal mandates, including a vaccine mandate for employers who employ more than 100 people that he said the federal government is trying to force on the states.

“We were very concerned that when we take funds there isn’t an obligation there that comes back to haunt us,” said Kenney. “We’ve had a lot of people within the private sector being told by their employer that they either get vaccinated or lose their jobs. I was told as recently as last week that we had a health care provider in the Littleton area where 16 people were laid off because they didn’t take the vaccine.”

That, he said, can exacerbate what is already a workforce crunch as the health care industry, travel and tourism, manufacturers, retail, and other sectors scramble to find enough employees.

“It’s been very difficult and the more mandates we put on the employees there is going to a good 20 percent of them who will push back, and they have,” said Kenney. “They are very much an angry group right now and they would like to see more flexibility and the ability for the governor to come up with solutions to keep employees when it comes to vaccines, but not to fire them. That should be the message out there, and the governor has not sent a strong enough message on that issue, that we need to protect our employees. I understand there are situations where they have to be vaccinated, but does that mean they can’t have another role within that company or health care setting?”

Those with co-morbidities, religious concerns, women who are pregnant, those concerned about the newness of the vaccine that is FDA approved based on emergency use and compared to other vaccines don’t have decades of field testing, and others who are vaccine-hesitant feel like their voices have been lost in the discussion, he said.

Kenney was asked if he believes the council’s vote intrudes on the vaccine decisions of private employers, a criticism expressed Wednesday by Sununu.

“The governor has the bully pulpit and the governor’s not laying down any mandates or executive orders, but he can suggest to the private sector please do what you can to accommodate your employees when it comes to vaccines,” he said. “I’ve heard enough of it from my constituents up and down the district, saying, ‘I was forced to take the shot when I didn’t want to take it, but I had to take it because I had to provide for my family.’ I’m not against vaccines. That’s a personal choice. But I am against employers not trying to work with their employees.”

In a statement following Wednesday’s council vote, Zandra Rice Hawkins, executive director of Granite State Progress, which as among a number residents and groups criticizing a Republican-majority council vote in September to reject a six-month extension to the Planned Parenthood contract out of concerns there was insufficient documentation to show a separation between family planning services and abortion services, took aim at the Republicans on the council as well as Sununu.

“Governor Chris Sununu’s history of echoing far-right opposition to vaccine requirements and opposing universal masking contributed to the reckless outcome of this vote,” she said. “It is shameful that as our COVID cases continue to increase, Sununu and his Republican majorities are turning away opportunities to help our families and communities. It is equally disturbing that armed protesters strapped with AR-15’s showed up to the meeting, which had already been moved to the police academy for increased security, to threaten and intimidate our elected officials. Our decisions should be made based on public health and science, not conspiracy theories, disinformation, and fear.”

In a statement after the vote, Sununu said the council’s decision “showed a reckless disregard for the lives we are losing while they turn away the tools our state needs to fight and win this battle against COVID.”

Kenney said the council is currently in the spotlight for several reasons, among them the amount of money from the federal government coming into the state.

“There are a lot of people who push back on vaccines and a lot who take it because, frankly, if they don’t they will be laid off,” he said. “When you go after a family and their livelihood and what they can stick into their body you will have controversy. We didn’t have these issues a few years ago. We had basic contracts.”

As for the anti-vaccine mandate protesters who shut down the Sept. 29 council meeting, he objects to their behavior.

“That was a first for me and I didn’t like it and I thought it was very disrespectful, un-American, un-New Hampshire, and not good for the democratic process,” said Kenney.

He said he’s also been seeing a worsening civic dialogue and much profanity in emails and on social media.

“There is a civil discourse out there that I haven’t witnessed in my lifetime,” said Kenney. “Not agreeing with someone’s opinion, but respecting that opinion, has been lost.”

Some of the vitriol has been directed at him, he said.

“The issues I’ve supported are the same ones I’ve supported 25 years ago,” said Kenney. “So people know who I am and probably know how I’m going to vote before I vote. But I work with people and help solve their issues as I’ve done numerous times over the years.”