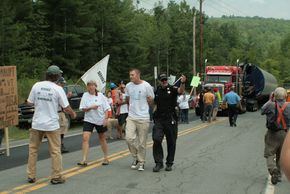 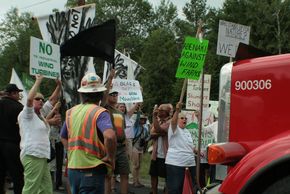 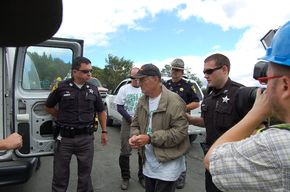 As Green Mountain Power blasted away at Lowell Mountain during construction of 21-turbine industrial wind project, protesters ramped up efforts to stop what they say is destruction of a ridge line for power that's not as "green" as proponents claim.

With blades now turning on Lowell Mountain, the protesters didn't win the battle, but they did start a war against the state's energy policies.

The statewide conversation didn't come about without personal sacrifice for protesters, who spent considerable time in court fighting charges.

The first of 16 protesters to be arrested were Sterling College students Trevor Ring and David Martorana, who were charged with contempt for allegedly violating a preliminary injunction intended to keep people out of a blasting zone. Judge Robert Gerety Jr. dismissed the counts, saying there was no evidence the young men were notified of blasting Nov. 16, 2011.

Six protesters, including North Country Hospital Dr. Ron Holland, were arrested for trespassing while blocking a crane path at the site Dec. 5, 2011. The six were found guilty by a jury and sentenced in December to either 25 hours of community service or a $250 fine. Their sentences were stayed pending adjudication of their Vermont Supreme Court appeal.

During an event July 16 in which about 100 protesters blocked a truck carrying turbine parts from entering the staging site, brothers Ira and Jacob Powsner of Ira were arrested for disorderly conduct by obstruction. After pleading no contest in September, Jacob Powsner was fined $300 while his brother chose to serve a one- to two-day sentence.

In early August, six more protesters were arrested for trespassing while blocking the crane path with a group of about 50 people. They are awaiting a decision on their motion to dismiss, based on the premise that an ongoing civil dispute over ownership of the land creates reasonable doubt.

In mid-August, a somber funeral for Lowell Mountain drew 30 people.