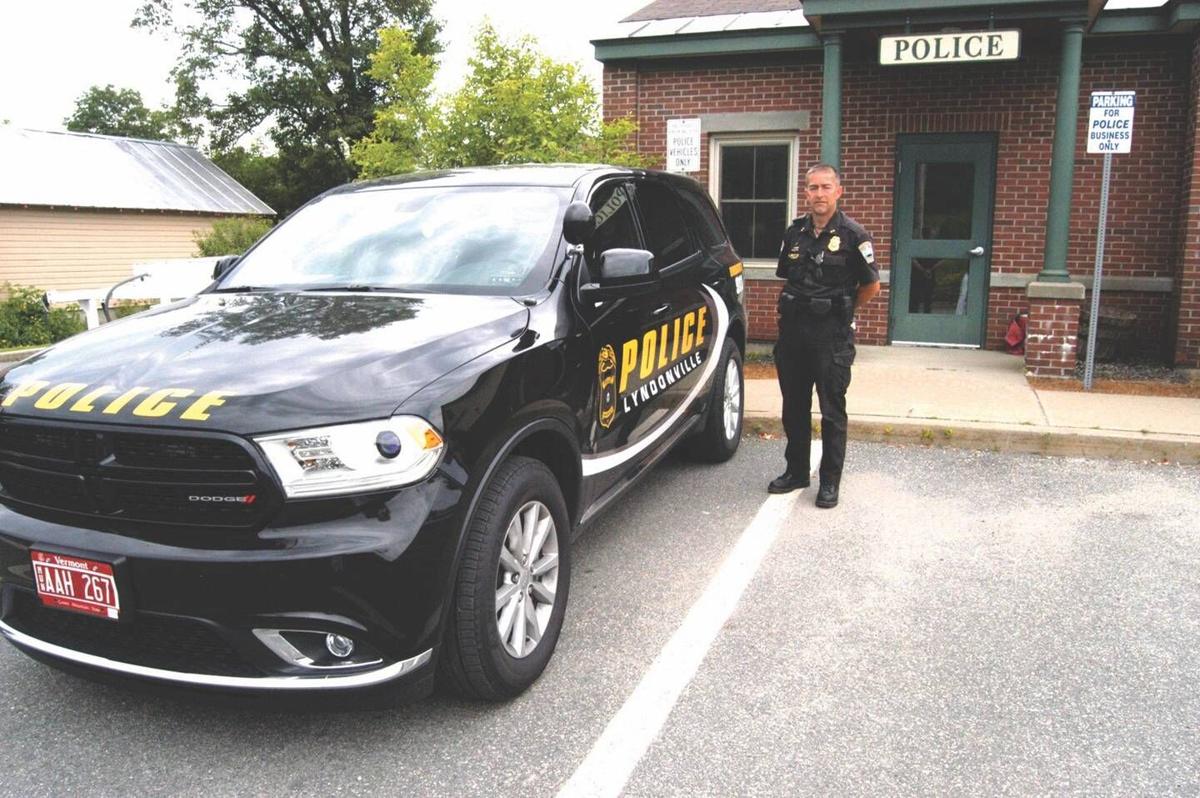 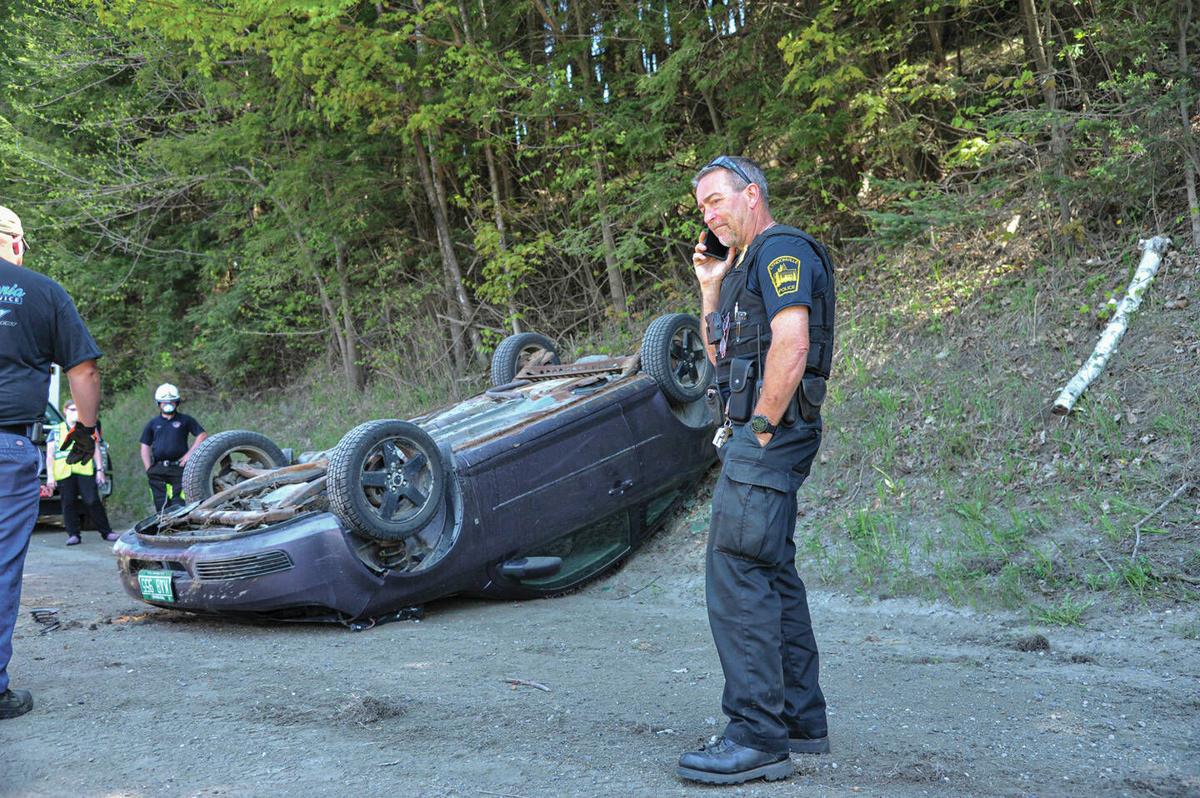 Lyndonville Police Chief Jack Harris, talks on the phone to the mother of a teenager who was the driver in a rollover crash on Lily Pond Road in Lyndon on Thursday, May 20, 2021. The driver, Morgan Emmons, 17, of Lyndonville, was not hurt. She said she lost control of the vehicle on the gravel road surface. Emmons was wearing a seat belt. Lyndon Rescue and Lyndonville firefighters responded. Caledonia Wrecker Service handled the wrecked car. (Photo by Dana Gray)

Lyndonville Police Chief Jack Harris, talks on the phone to the mother of a teenager who was the driver in a rollover crash on Lily Pond Road in Lyndon on Thursday, May 20, 2021. The driver, Morgan Emmons, 17, of Lyndonville, was not hurt. She said she lost control of the vehicle on the gravel road surface. Emmons was wearing a seat belt. Lyndon Rescue and Lyndonville firefighters responded. Caledonia Wrecker Service handled the wrecked car. (Photo by Dana Gray)

A year ago, the death of George Floyd sparked a national conversation on police reform.

Those events prompted the Twin States to take action.

In New Hampshire, the Commission on Law Enforcement Accountability, Community and Transparency appointed by Gov. Chris Sununu released a number of recommendations on police reform.

Meanwhile, in Vermont, Gov. Phil Scott signed police reform legislation last year that required state police to wear body cameras and prohibited law enforcement officers from using chokeholds. (In May he amended the legislation to allow police officers to use chokeholds for self-defense and in life-threatening situations.)

To foster a better understanding of the issue at the local level, The Caledonian-Record submitted a questionnaire to local police departments in the Northeast Kingdom and North Country. To date, four have responded.

Why did you enter law enforcement? What motivates you today to continue in the profession?

I entered Law Enforcement as I had a friend who wanted to take the test and didn’t want to take it alone. Then I got hired. The thing that motivates me is that I know that there are still people out there who need our assistance and appreciate it when we are there.

How would you describe your approach to police work? To building a department culture? Do you place an emphasis on particular parts of the job?

My approach is a community-based approach. When possible, I treat people how I would want a member of my family treated by law enforcement. When that is not possible, I rely on 32 years of experience to fall back on. I try to instill in the officers that being a part of the community is just as important as the enforcement aspect, if not more-so. For myself I place an emphasis on the community. For the officers I believe it is up to each officer to decide what works for them and where their emphasis falls.

How would you describe officer morale over the past year? If it’s a problem, how do you address it?

Especially with new officers the morale has been tough. Regardless of whether they just came into the field or have been in the field for a while, being judged by the actions of others who are not from our area is a difficult thing to deal with. [Our officers] are put in a spot where they see that the job is dangerous, yet if the need arises and they protect themselves, it is viewed as something completely different than it used to be. I find myself checking in with the officers a lot more to make sure that they know that their work is appreciated. I often fear that if that need arises to protect themselves, they will not perform as they should for fear of what might happen, thus putting themselves in danger, or worse yet risk of death. Young officers are asking themselves if the job is worth it anymore.

What changes would you make to law enforcement and why? Do you see valid points in calls for police reform, and a “defund” movement that seeks to shift certain responsibilities to social service agencies?

As a professional, I will choose to retain my thoughts and opinions on this matter.

Do you wish public response to law enforcement were different? If so, how and why?

Do I wish public response to law enforcement were different? Of course. Nobody wants to go to work every day being brought down or attacked or worse. It hasn’t happened here yet, but across the nation officers are attacked and gunned down for merely putting on the uniform. I understand we deal with people at the worst moment of their life. Either someone committed a crime against them, and they are calling for assistance, or they committed a crime and we are there to stop them. So I do not expect everyone to approach us with open arms. Yet after 32 years of law enforcement I should not have to go to work with my wife wondering if I am coming home.

Have you made any specific changes to training or procedures in the past year, in response to ongoing reform efforts, legislative developments and public concerns?

Policy-wise there have been changes and that is statewide. We rely on VLCT (Vermont League of Cities and Towns) and our Governing bodies to set policy that will address ongoing concerns. Once those policies are developed, we adopt them as our own. Operations-wise we use many of the events that have occurred as training opportunities. We go over what went right, what went wrong, and more importantly how to fix it so we do not find ourselves in the same situation.

What is the single biggest problem facing law enforcement today?

The single biggest problem is the stereotyping of officers. Where there are regulations that prohibit law enforcement to stereotype, officers are all stereotyped by the actions of a very small percentage of our field.

Is there something you wish new recruits either learned, or understood, prior to starting their careers?

I believe our training academies do an excellent job at preparing our young officers and although I don’t have many, I am satisfied with the knowledge my officers have.

Is policing more dangerous than 5, 10, 25 years ago? If so, how has that impacted officer behavior?

Yes, it definitely is. Again, officers are not under the impression that everybody is going to like them. Yet 10, 25 even 30 years ago there was a mutual respect regardless of who you were. When we would deal with people, we would receive respect and we would give respect to those we dealt with. Regardless of who they were or what they did. Today there is a general lack of respect. (I will not generalize and say from everyone, as that would be an untrue statement.) The lack of respect makes for a very dangerous situation. Where in days gone by, people would know that the place to argue was in court, today those arguments and confrontations occur street-side. What people do not grasp is that not one of those street officers was instrumental in, or authored, any of the laws they are tasked with enforcing. Yet the street officer is the most confronted person in the entire judicial system. This causes fear. Fear on both sides, including the officer, which in turn changes the way they may regularly deal with a situation.

The Mains Street Media (MSM) is an arm of the Globalist attack system mounted against police officers as they take very rare isolated cases of wrong doing and promote them as the norm. MSM does all they can to demonize police officers, MSM is the enemy of the people. Support your good police officers,

It is tough to be a police officer today as they are being attacked by the Globalists in their effort to destroy the United States. They do this in a multitude of ways from sponsoring the anti police organizations like BLM and Antifa on one hand and then on the other, in pincer fashion, try and make the police officers more liable for anything they do. The end goal for the globalists is to make life unbearable for good police officers so they quit leaving a vacuum they they would then fill by installing their own enforcers. This is why everyone must support the police and make sure the legislators do not pass more laws to make police officers unreasonably liable, Wake up people and protect your liberty.