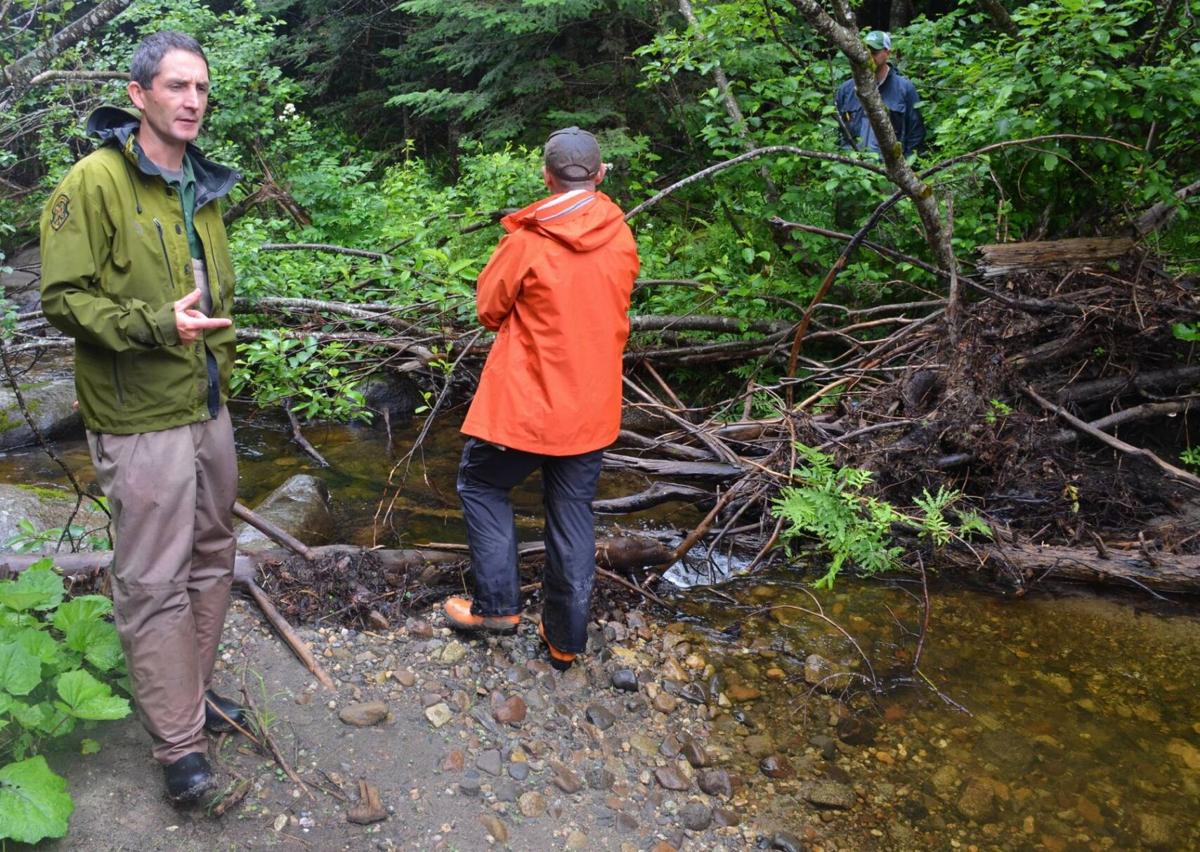 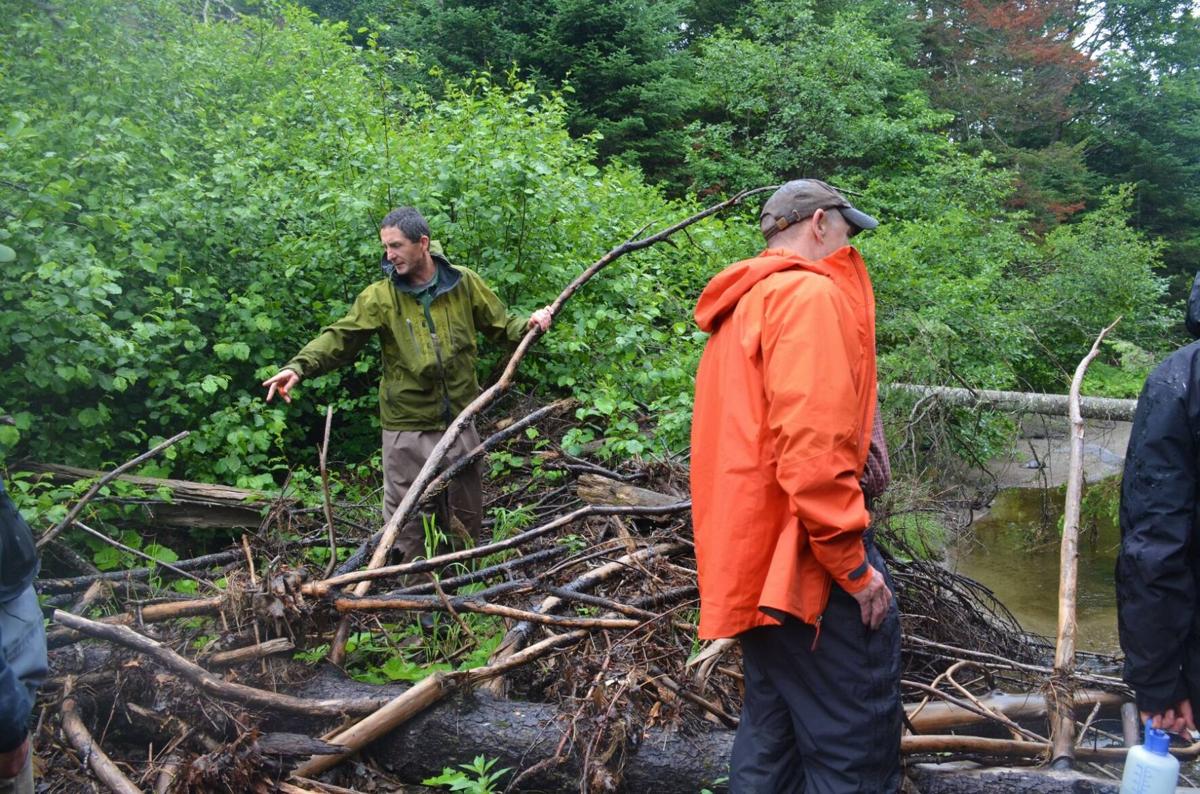 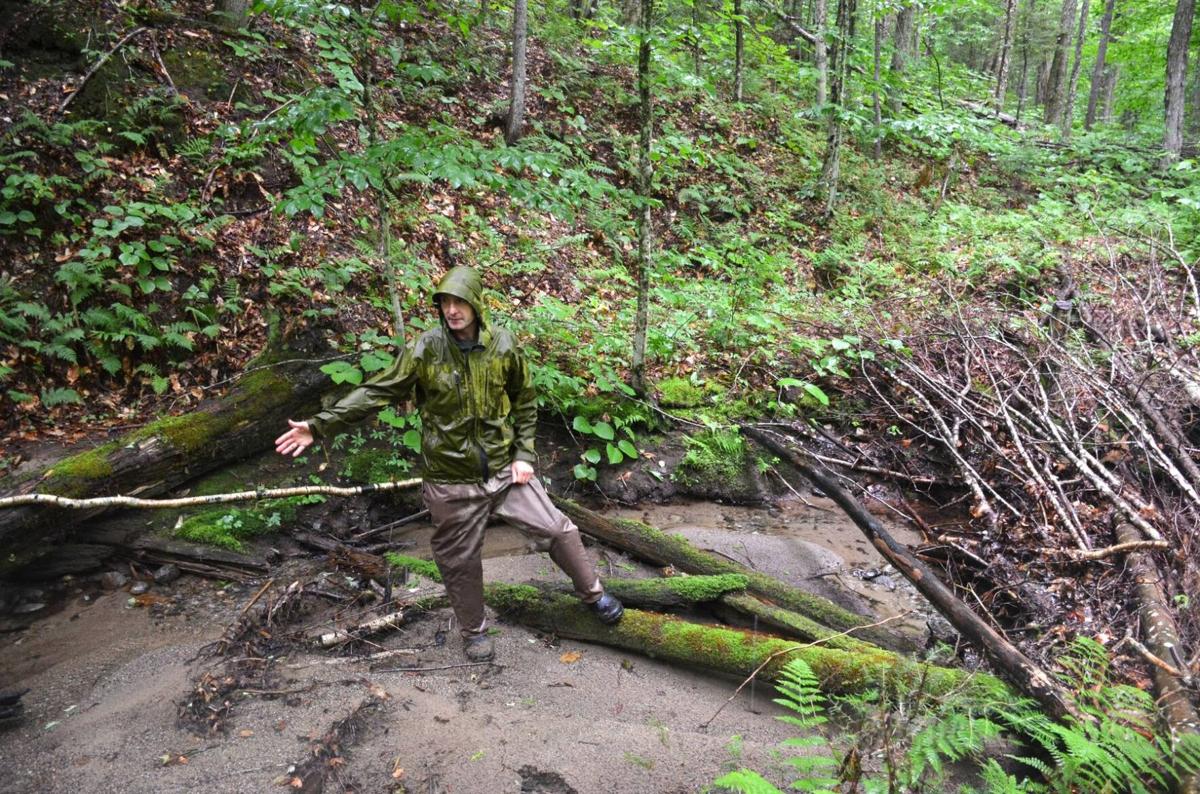 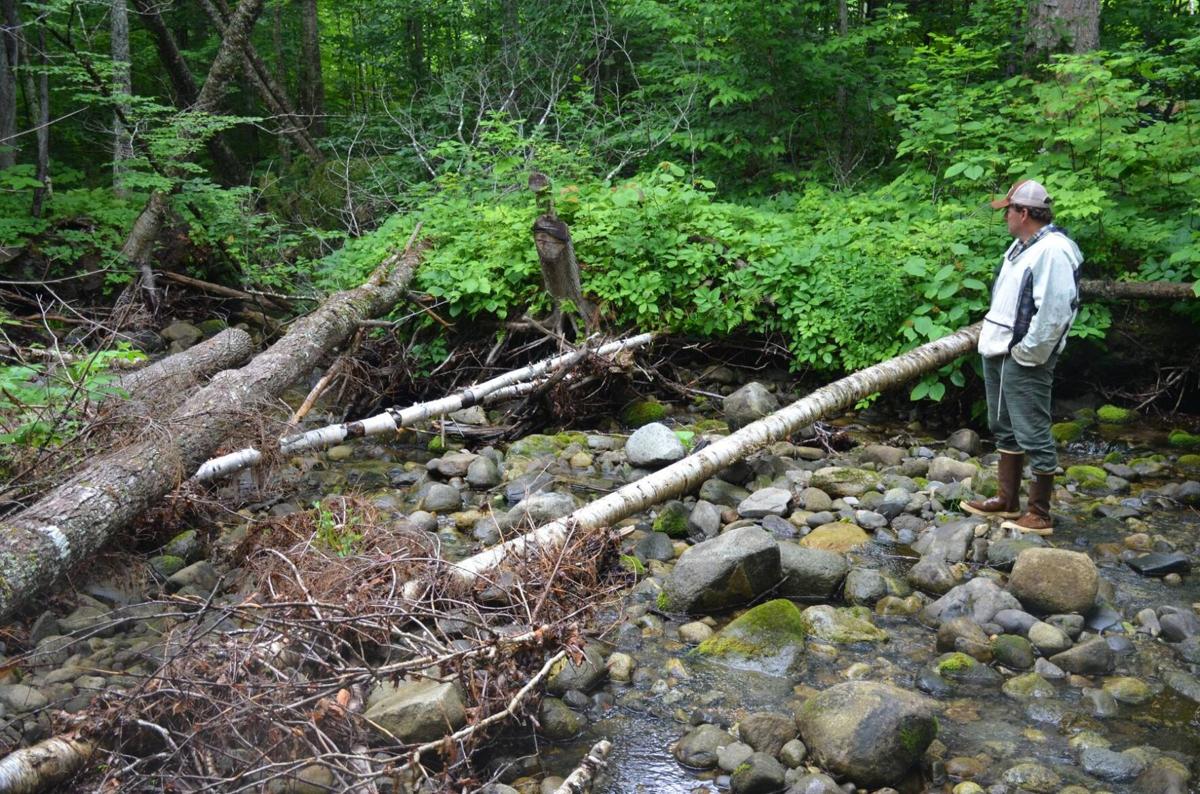 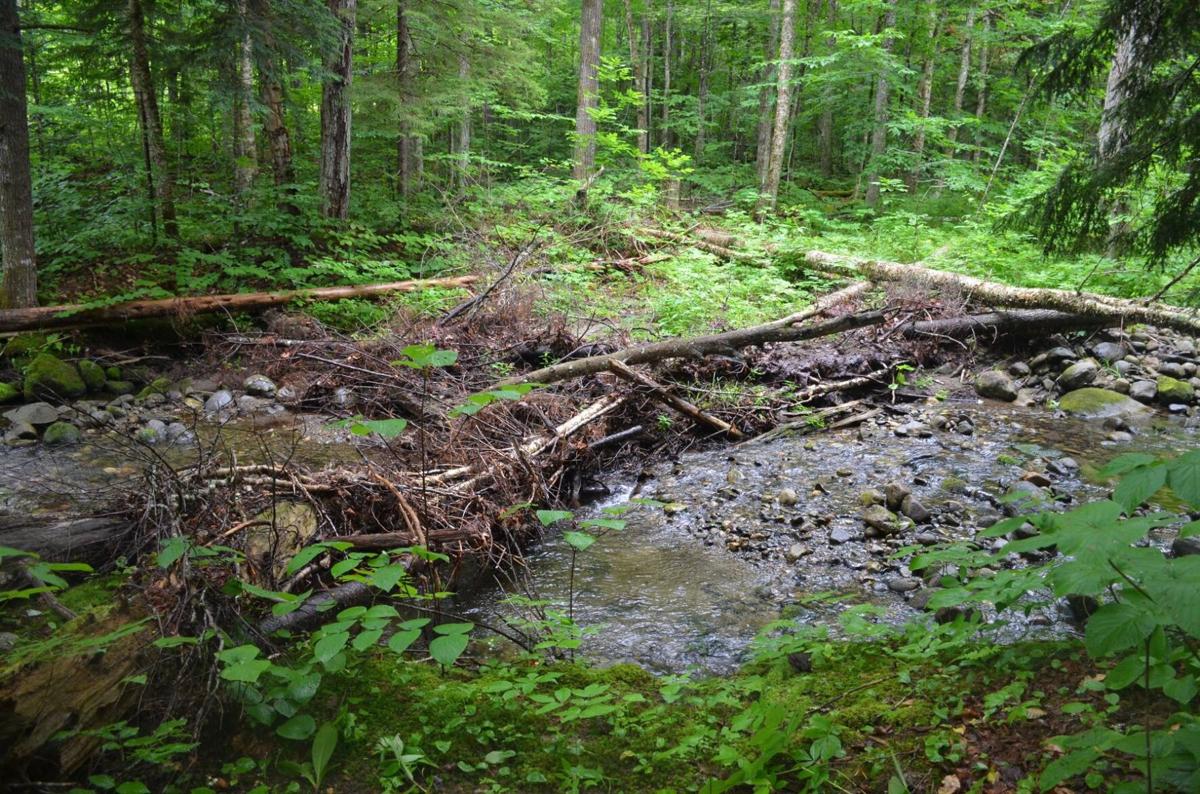 Strategic wood addition is a technique implemented by Vermont Fish and Wildlife to return streams to a more natural state and improve habitat for brook trout. (Photo by Katherine Fiegenbaum) 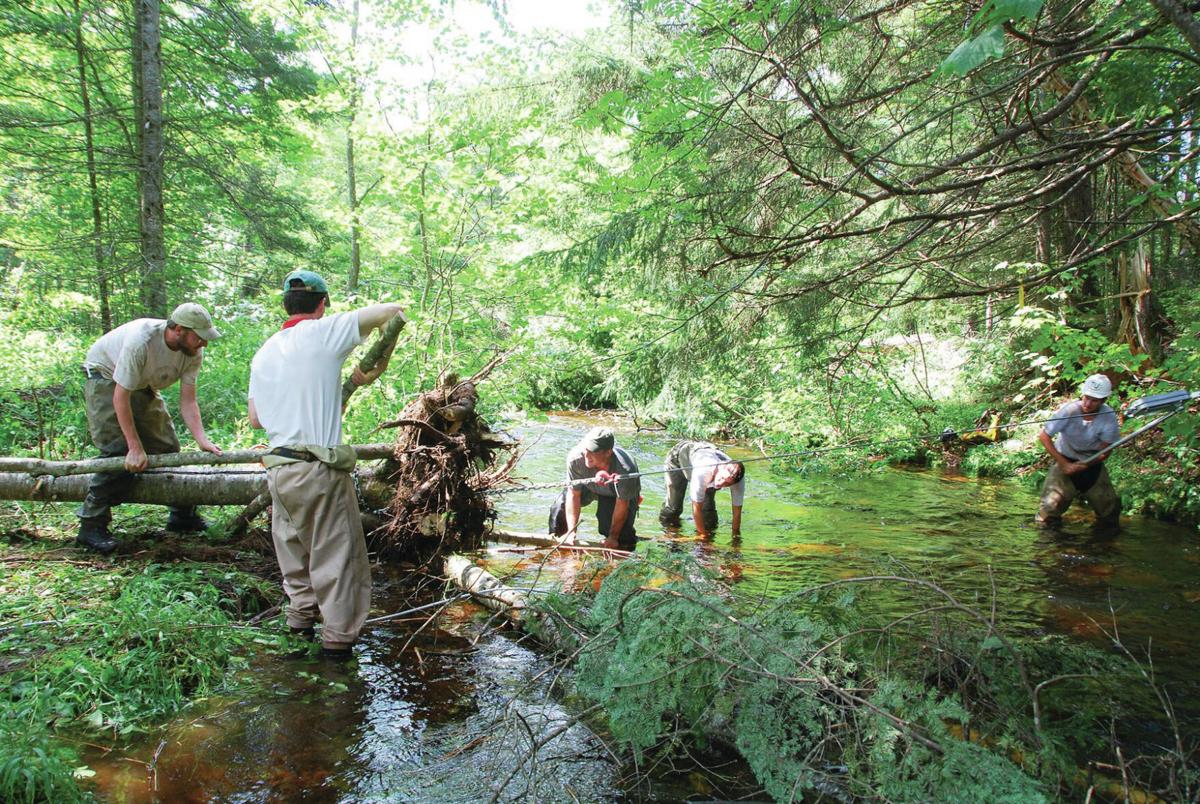 Strategic wood addition is a technique implemented by Vermont Fish and Wildlife to return streams to a more natural state and improve habitat for brook trout. (Photo by Katherine Fiegenbaum)

When Jud Kratzer, fisheries biologist with Vermont Fish and Wildlife’s St. Johnsbury office, started looking to add downed trees to streams in order to improve habitat for brook trout over a decade ago, many did not think it would work.

But now, research is clear that the practice, known as “strategic wood addition,” is beneficial and funding is available for private landowners to implement it on their own land.

The reasoning behind strategic wood addition is simple if you know the history of logging in the Northeast.

“A lot of our streams in Vermont look empty,” said Kratzer. “To many people that looks fine and normal, but it’s not what our streams looked like originally.”

In the late 1800s and early 1900s, boulders were dynamited, large pieces of wood were removed and rivers and streams were even rerouted and straightened in order to make way for logs to be transported easily down them. In addition, much of New England’s old-growth forests were cut right down to the riverbanks, leaving only young, healthy trees that don’t often fall into waterways.

“We’re trying to jump-start a natural process,” said Kratzer. “Ultimately, we want to have this occurring on its own.”

Kratzer says that our culture often thinks of wood as something to get out of streams as quickly as possible, which he saw clearly in reaction to Tropical Storm Irene in 2011.

“We want to communicate to people that we want wood in the stream: it’s important and valuable,” he said. “Hopefully we can change the culture to naturally see wood staying in streams.”

Wood submerged in water can serve a purpose for up to a century, collecting and retaining organic matter, the base of the food web.

“Fish rely on those leaves and organic material from the forest falling into the streams, decomposing and becoming food for insects, which in turn are food for fish,” Kratzer said. “By adding wood, by catching that organic material and keeping it in these small streams, we’re basically feeding the entire food web.”

In addition, woody material stops and retains sediment that would have washed downstream and caused problems along the way. It also forms pools, a habitat important for trout in the wintertime.

Why brook trout? Not only are they Vermont’s state fish and widespread across the state, but Kratzer says they’re always the top species in statewide angler surveys, and they’re beautiful.

“Also, if they’re present, we know the stream is in good shape,” he said. “They’re an indicator species.”

“That’s where you want the river to get and spread out into the forest before it rushes down to where everybody lives,” said Kratzer.

Most strategic wood addition work in the NEK has been done on federal or state lands or land owned by the private timber company Weyerhaeuser. 37 miles of river have been filled with 575 “structures” that have lasted at least one full season, and studies show that brook trout populations have tripled in a short time at the sites with strategic wood additions.

In fact, at one spot on Paul Stream, Vermont Fish and Wildlife no longer needs to stock the stream with fish each year because the practice of adding wood has increased and kept brook trout populations high.

Kratzer is working to train more practitioners and land managers in the art of strategic wood addition, especially as there is now funding from the Natural Resources Conservation Service for the practice to be utilized on private lands.

“We’re in a phase now where we’ve proven that this works, but we can’t do everything,” he said.

Two types of strategic wood addition exist: one, used on smaller streams, just requires manpower to cut the trees and help them fall strategically in the river. The other uses a grip hoist machine to maneuver the logs into place. Both types have minimal impact on stream beds and banks.

“There is a lot of thought about which trees we cut and how we put them down; it’s not just a random process,” said Kratzer. “Ultimately we want a restored forest that will continue this process naturally.”

The work has been done with many partners and funding sources since 2008, including Trout Unlimited, the Sport Fish Restoration Program, VT fishing license sales, the New Hampshire Charitable Foundation and the National Fish and Wildlife Foundation.

Kratzer says that interested parties wanting to learn if strategic wood addition is a good project for their land should reach out to the NRCS. They can also contact him at Jud.Kratzer@vermont.gov or learn more at Vermont Fish and Wildlife’s website - https://vtfishandwildlife.com/ .

Creating healthy for brook trout is very important and the flooding danger can be dealt with provided the application is done judiciously with the awareness of the flooding danger. Logs must be shot enough so if in the event of major waters, they do not pile up and create potential log jams in flooding. .An excellent idea overall.

As an added bonus to using tax dollars to put wood in streams, there will be the dams that are created by the wood being washed down in great storms to magnify the effects of floods. How exciting!