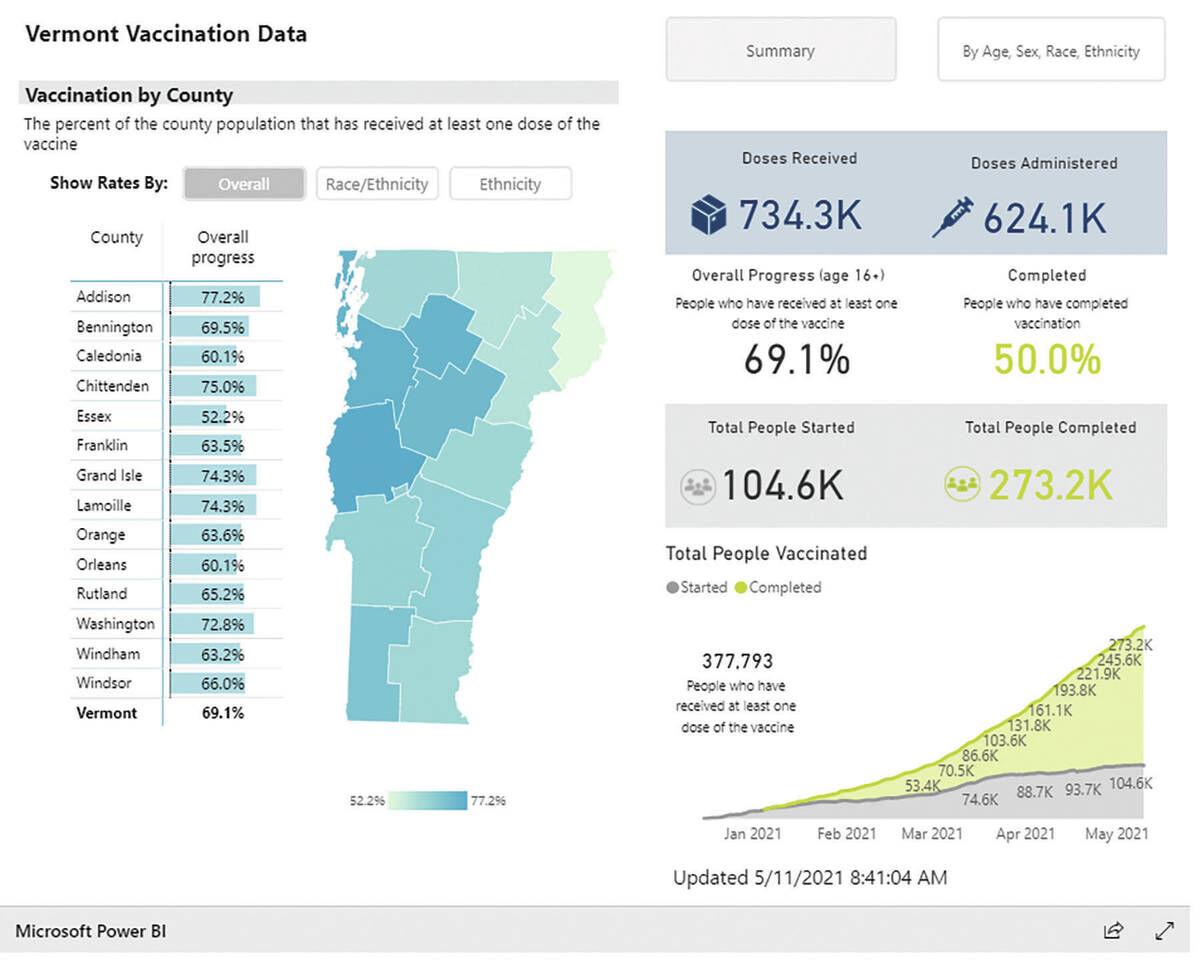 State officials outlined plans to conduct dozens of vaccination clinics at schools around the state in anticipation of the expected CDC authorization this week to allow children as young as 12 to be vaccinated against COVID-19.

Agency of Human Service Secretary Mike Smith said the first round of clinics would be held at up to 40 schools in the days ahead. State officials believe the CDC, which is convening its vaccination panel Wednesday afternoon, will grant emergency use authorization for the Pfizer vaccine for children 12 and up. If that approval is issued Wednesday afternoon Vermont would begin accepting appointments for new ages Thursday morning. The school clinics would begin on Monday, May 17, but families could sign-up online for appointments that might be available even sooner. Children could also take advantage of the many walk-in doses that are available around the state, provided it is the Pfizer vaccination once the approval is issued.

“We have been communicating with school districts and we are very appreciative of their support in this effort,” said Smith Tuesday during the state’s media briefing.

Smith said many of the schools that hosted earlier vaccination clinics for school teachers and staff have been tapped to hold the upcoming clinics geared toward students, however, the clinics would also be open to the public as well.

Registrations will be available through the Health Department’s website and call center.

St. Johnsbury Academy is just one of the schools tapped to host a clinic next week. In a letter sent home to families, SJA encouraged families to create an account on the Health Department website and register their child as dependent now to expedite the sign-up process when the appointments go live for youth registration.

“This week we anticipate they will announce that the Pfizer vaccine can now be given to children 12 and older in Vermont. The AOE has asked us to hold a clinic here at the Academy on Wednesday 5/19/21 from 11 a.m. - 6 p.m.,” wrote SJA Director of Health Services Sarah Garey to the school community. “This will be an open clinic that anyone from Vermont can sign up for, so we want you to be ready if you choose to have your child vaccinated.”

The Pfizer vaccination requires 2 doses with the second dose 3 weeks after the first. According to the letter from Garey second doses for the Academy, clinic would be administered on June 9.

Secretary Smith recapped a number of other upcoming vaccination efforts as well as recent ones in the region.

Registration will open soon for a drive-thru event available to Vermont residents at the Lancaster, N.H., Fairgrounds on May 21.

Smith also said there are a number of vaccination clinics coming to EMS and fire stations in 2 weeks.

“On May 21, 22, 23 emergency medical services and fire departments across Vermont will open their doors and host vaccination clinics, said Smith. “EMS Week is traditionally reserved to celebrate the 2,800 dedicated men and women who serve Vermonters through the EMS system. The best way you can recognize the hard work and sacrifice they have done over the year is to become vaccinated.”

Smith said there will be 30 EMS vaccination sites throughout Vermont for walk-ins and further details will be released later this week.

“This was interesting,” said Smith of the vaccinations at the Bradford race track. “They surveyed people attending and out of 132 people not vaccinated, 75 took the opportunity to be vaccinated at the speedway.”

Smith thanked the racetrack for hosting the event and for granting free admission to those who were vaccinated.

The Department of Corrections will conduct facility-wide testing at Northern State Correctional Facility in Newport on Thursday following a positive test of a staff member on May 4.

According to Rachel Feldman, DOC Public Information Officer, the staffer had been on shift in the days before the surveillance test that identified the positive case and others within the prison facility were identified as close contacts.

Of the current prison population in Newport 212 inmates have received at least their first dose while 131 have refused the vaccination, said Feldman. Out of all DOC staff statewide, 467 of 591 eligible staff opted to get the Johnson & Johnson vaccine that was offered by DOC, while others may have received vaccinations through other providers.

Feldman said at this point the positive case and facility-wide testing that is planned for Thursday have not resulted in any delays to DOC’s ongoing vaccination efforts within the facilities and that no second doses have been delayed.

Northern State Correction Facility was the site of a large outbreak that lasted over a month and infected more than 175 inmates and staff earlier this year.

Experts have discovered that the spike proteins replication that the "covd jabs" are creating attack various organs in the body. Anyone in the school or government or media system that promotes these "jabs" should be held responsible for any deaths of children that follow administering of these Frankenstein Pseudo vaccines. The data is out. To proceed is aiding and abetting the mad scientist eugenics freaks.

The path out of this is letting the Globalist hierarchy know that it is time to change the evolutionary direction that has dictated their actions for the last 120 years. The direction they are invested in is based on the ancient slave and control systems that have been used throughout history for controlling the masses. Forgiveness is key. There is room for everyone. People want the best for others despite what their advisers have been advising and their propaganda teams have been propagating for them. They have ruled by fear, manipulation and lies. They need to know that their lives can be better too by being honest and treating people like they are assets rather than the enemy. This truth must start being communicated. On local levels instruction should focus on truth and empowering citizens for a society that is inclusive that treats others and nature with the respect and love. It will be so wonderful to see this happen. Give humans a chance.

Promoting these as a "vaccines" when many top virologists have said they are not by schools or fair directors to under age children seems to me like the height of reckless inexcusable behavior by any teacher or school board member of any participating schools that promote this. Many are saying this is a bioweapon that could compromise or destroy a child's health for a lifetime.

Turning children into GMOs is so progressive.

I believe this violates the Nuremberg Law for Crimes Against Humanity. Terrifying.