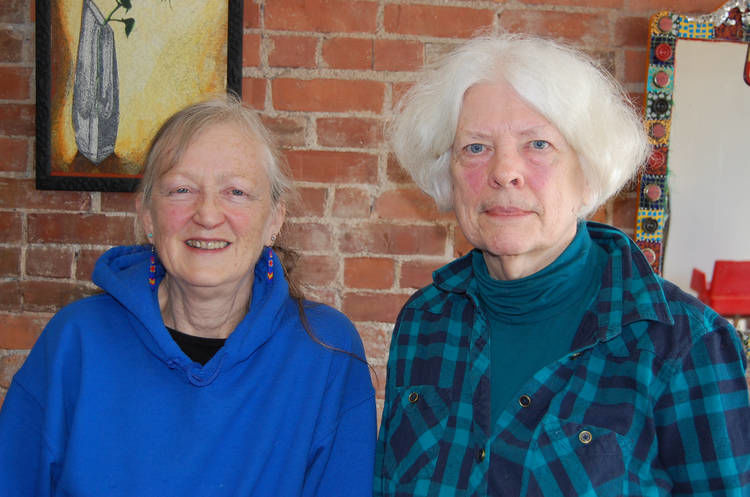 Pam Ladds and Anne Chiarello of Newport City make it a priority to question municipal and state leaders and seek government transparency. (Photo by Robin Smith) 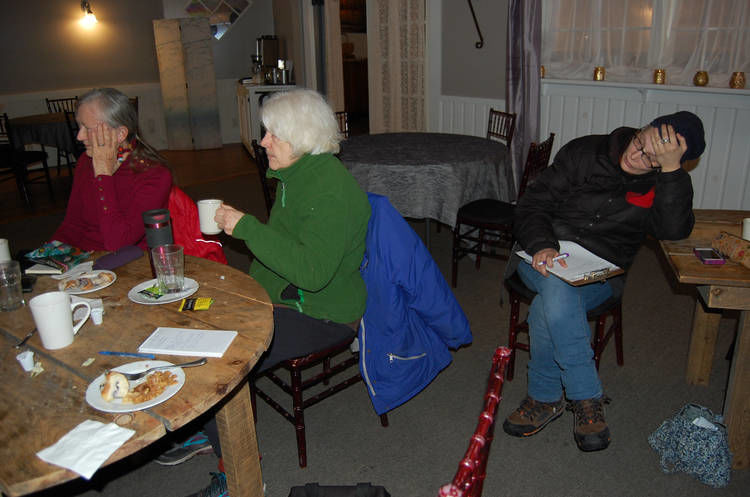 Pam Ladds and Anne Chiarello, at left, at a recent legislative breakfast at the East Side Restaurant in Newport City. (Photo by Robin Smith) 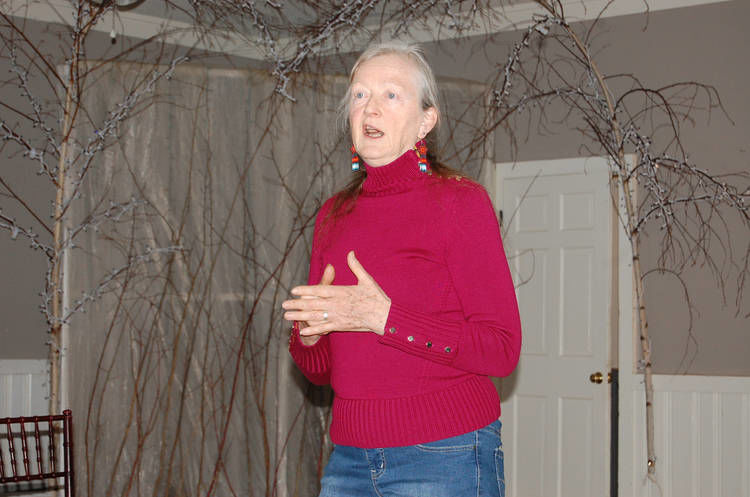 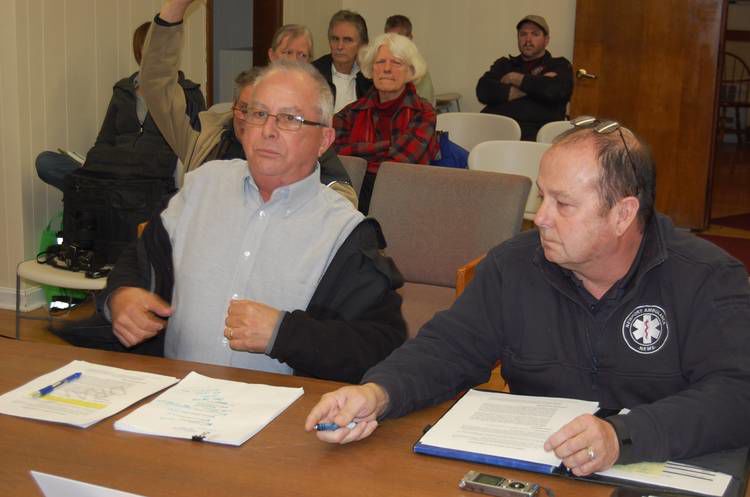 Anne Chiarello, in red, sits in her usual location in the audience at a Newport City Council meeting in November 2017, while Newport Ambulance President Charlie Pronto and former executive director Michael Paradis speak to the council about ambulance funding. (File Photo)

Pam Ladds and Anne Chiarello of Newport City make it a priority to question municipal and state leaders and seek government transparency. (Photo by Robin Smith)

Pam Ladds and Anne Chiarello, at left, at a recent legislative breakfast at the East Side Restaurant in Newport City. (Photo by Robin Smith)

Anne Chiarello, in red, sits in her usual location in the audience at a Newport City Council meeting in November 2017, while Newport Ambulance President Charlie Pronto and former executive director Michael Paradis speak to the council about ambulance funding. (File Photo)

NEWPORT CITY — The Newport City Council on Feb. 4 opened its meeting, as always, with the public comment period.

City resident Anne Chiarello stood, as she almost always does, and offered her take on recent council decisions.

This time, Chiarello took the council to task for not putting two voter-petitioned articles signed by 260 voters on the city’s town meeting ballot.

Voters in Derby will get to consider those articles. Voters in Newport City will not.

Chiarello complained that the council voted at a previous meeting under “new business” not to put the articles on the ballot, without advanced warning on the agenda.

“It’s always been the rule here … that before a vote, it has to be a warning, that it’s got to be an agenda item, and can’t be something that’s simply raised in new business,” Chiarello said.

“I can assure you that if the public, all 260 or some of us who signed that petition, had been aware that there was going to be a vote that night … more of us would have been here to comment on it,” she said.

“You can’t simply raise an issue in new business and then get a vote on it. It is totally unfair, it is the essence of our democracy that people should know ahead of time what’s going to be on the agenda.”

“I submit to you that the vote that time is null and void,” Chiarello concluded.

Chiarello asked the council to reconsider the decision. The deadline to warn articles had passed. The council did not take up the request.

“That vote is legal,” Mayor Paul Monette said, citing advice from the Vermont League of Cities and Towns and the city’s attorney and saying that the council didn’t have to follow the usual policy of warning all pending votes on the agenda.

He compared it to a similar situation in Burlington, although he didn’t know if the vote there was warned or not.

Anne Chiarello, 73, and Pam Ladds, 69, did not win their argument that time. But they are satisfied that they pushed the council to defend its actions in front of a wider audience – the readers of local newspapers, and the viewers of the NEK-TV tape on a public access channel on cable, Facebook and YouTube.

The couple moved to Vermont in 2008 from Philadelphia when Chiarello retired, excited to participate in Vermont’s vaunted local democracy.

They said they were shocked to discover that very few people attended city municipal meetings.

“I am appalled that power in this area and many others is top down as opposed to from the grass roots,” Ladds said.

They’ve become regular attendees of the city council and other boards, challenging decisions in the case of the landfill, or supporting those on the council who eventually expanded water meters in the city.

“We pushed and pushed” until those who wanted meters could get them, Chiarello said.

“When we first started going to meetings, there was no one there but us in the audience of the public, and the papers. Now there is more of an audience, a lot of people are watching it,” she said.

It’s not just getting results for Ladds, it’s the act of questioning and seeking information that drives her.

“To some extent we are examples for other younger people of what you can do and what you should be doing when you have the time and an issue is burning for you,” Chiarello said.

“You may be defeated over and over again but you need to go out there and let people know what your issue is and eventually it will catch on.”

“This is a community that is struggling. It will change as everybody becomes involved. But people are actively discouraged. They are taught to believe that a shining knight is going to save us all.”

Chiarello benefited from free education in New York state and became a public defender in Philadelphia to represent poor people as a way of paying it back.

Ladds moved from Great Britain to the U.S. in 1980 to work in health care and social work. An AIDS advisor and activist, she met Chiarello there in 1987.

When Chiarello and Ladds moved to Newport City, the couple first participated in the weekly downtown protest led by the late Rev. John Castle against the ongoing war in Iraq.

That led to participation elsewhere, in volunteer efforts, the Renaissance Corp., legislative breakfasts, city meetings “and anything else that was happening,” Chiarello said.

“And we spoke up,” she said. “That was my concept of paying back.”

“I come from a country that encourages people to participate, to get involved,” Ladds said.

Her grad school work encouraged activism, which Ladds said she was shocked to find wasn’t encouraged in the U.S.

Ladds said she’s been asked why she and Chiarello don’t run for office.

If you are part of an organization or board, “you get sucked into the system.”

“It’s not so much about the outcome for me. It’s about the ability to ask the question, to shine a light … If we don’t look at something, how can we change?” Ladds asked.

Ladds worked for Clear Water, cleaning up the Hudson River, a huge effort compared to the current controversy over the landfill in Coventry.

They consider the introduction of water meters an accomplishment, and efforts to share information on social media.

“It is effective in Newport when there is media present and a camera present … otherwise you might as well piss in the wind,” Ladds said.

Chiarello said they have to keep pushing until they get a response.

Ladds has a habit of rolling her eyes, laughing out loud or making “tsk” sounds when she disagrees with someone. It’s her manner with everyone, and it gets under the skin of some on the council.

Ladds says she doesn’t do it to upset anyone. She’d would rather receive a response to questions.

“In public comment you are talking to a blank wall, there is no feedback,” Ladds said, calling it a tool “to make people insane.”

They were critical of council budget presentations last fall, when even council members waited until after all the presentations by department heads before asking questions. Raboin and Alderman Dan Ross said they wanted that process changed next time.

“They are encouraged to be passive,” Ladds said of the council.

Not all parts of Newport City government are, they said.

Chiarello and Ladds pointed out that the Vermont secretary of state said that it was legal for the council not to put the landfill articles on the ballot, but maybe not advisable.

They noted that even the chairman of the regional Act 250 commission recently expected that citizens in Newport could have a voice in the landfill issue through a town meeting petition and was surprised when he heard that the council wouldn’t let voters have a say that way.