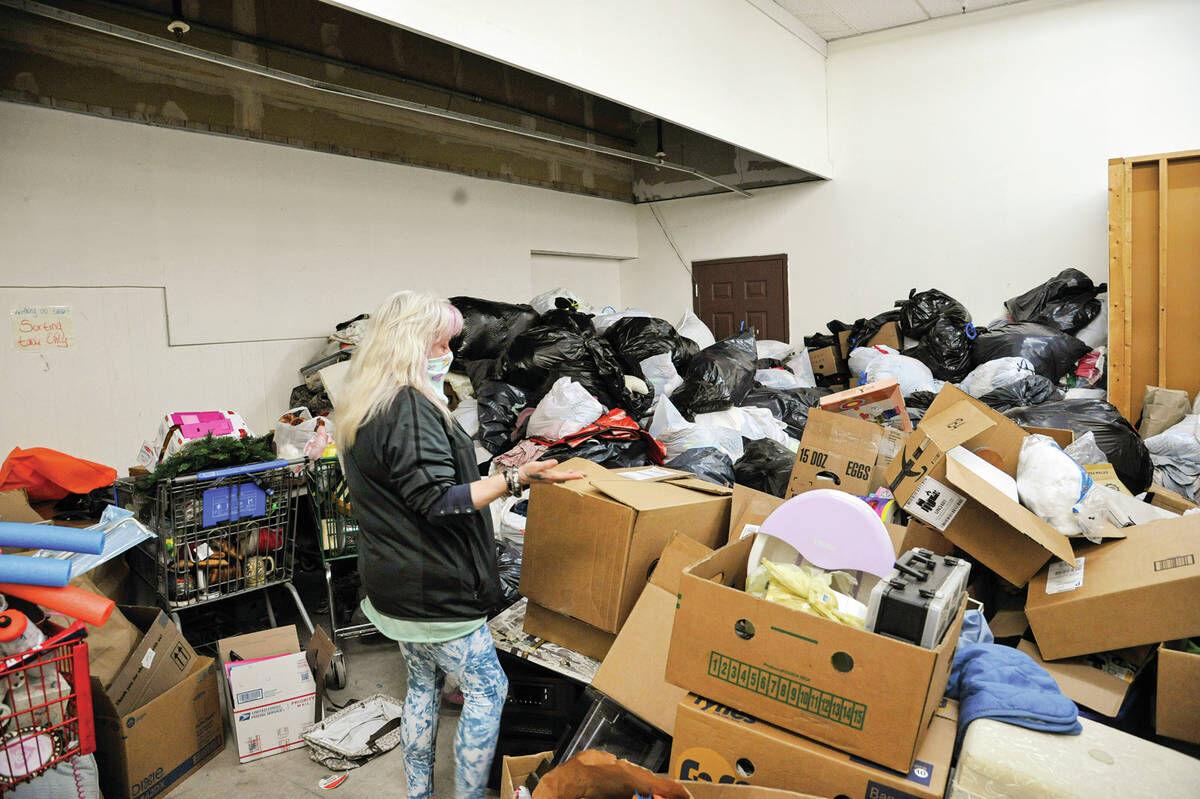 Paris Hope, employee at the St. Johnsbury Salvation Army Thrift Store, gestures toward a back room full of donated items, most of which are garbage. (Photo by Dana Gray) 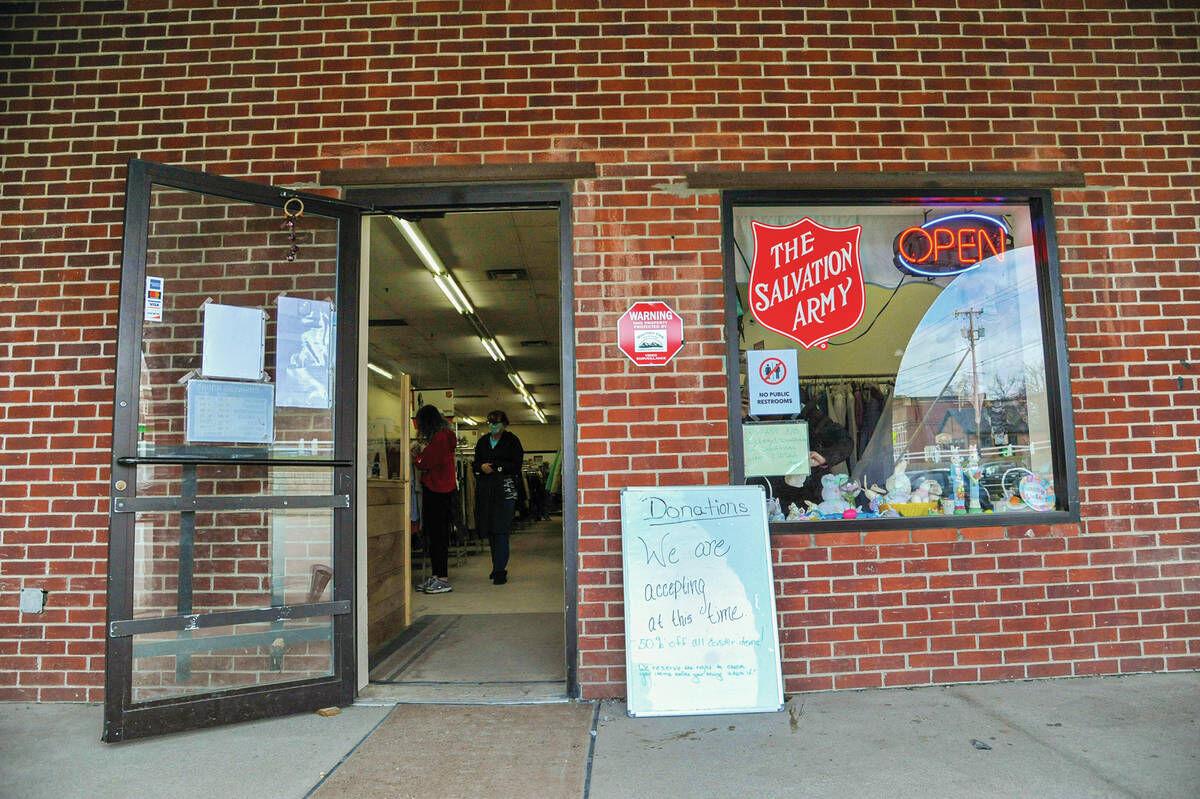 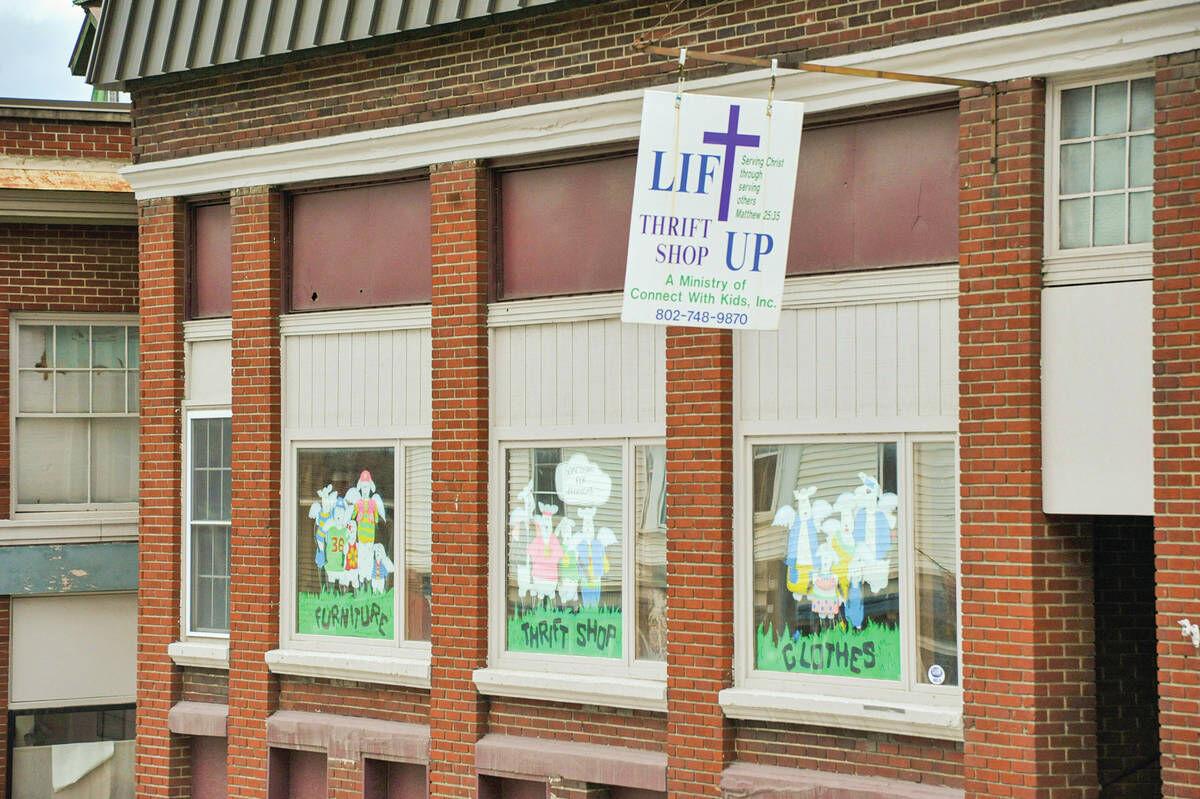 The Lift Up Thrift Shop is located on Eastern Avenue in St. Johnsbury. (Photo by Dana Gray) 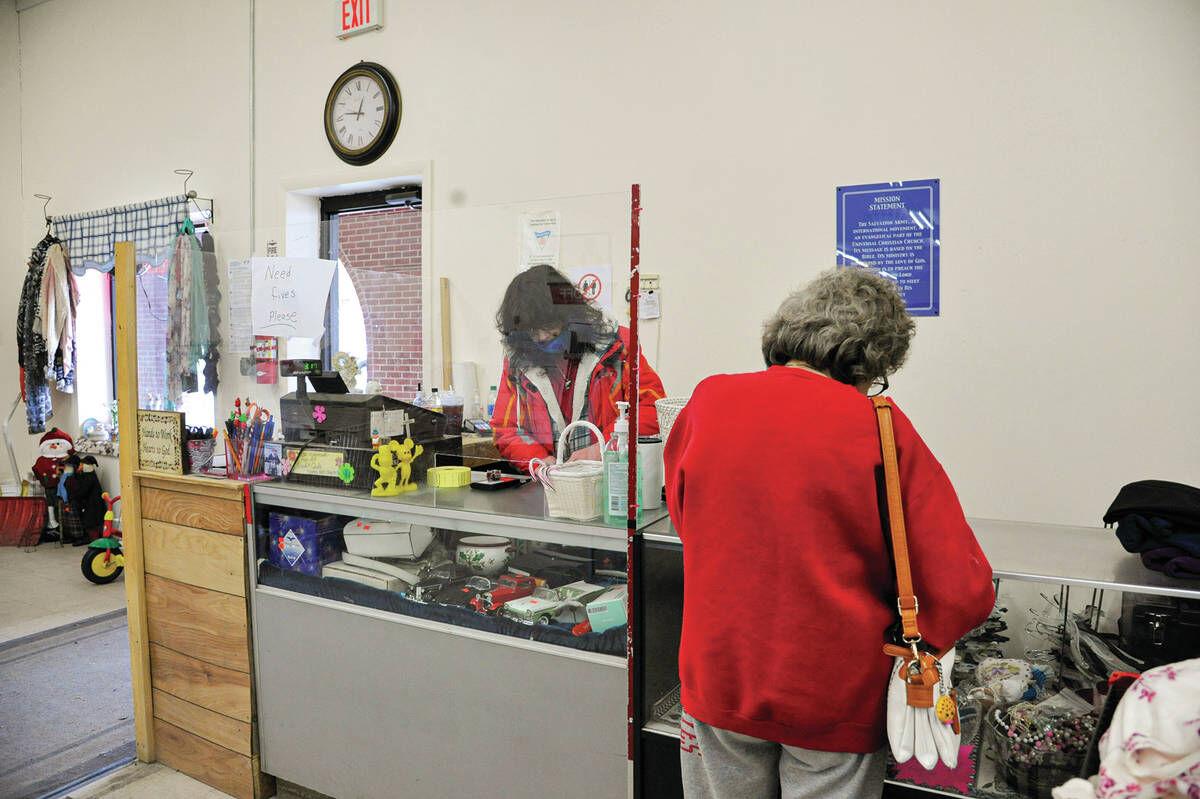 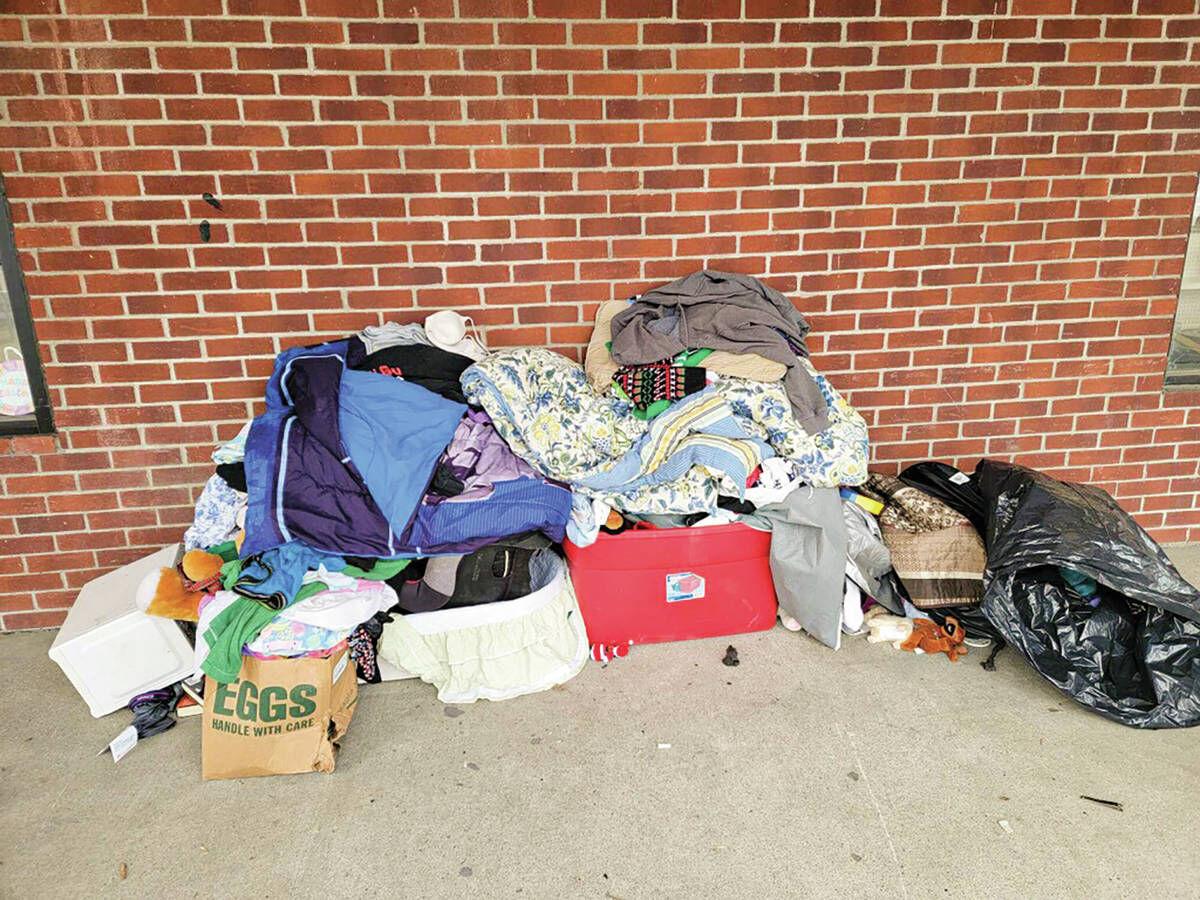 Donated items are piled outside the Salvation Army Thrift Store on Monday, April 5, 2021. The stuff was left outside the closed store sometime over the weekend. Staff at the store say they cannot take donations when the store is closed; they're getting too many things that are too trashy to be sold in the store. (Courtesy Photo)

Paris Hope, employee at the St. Johnsbury Salvation Army Thrift Store, gestures toward a back room full of donated items, most of which are garbage. (Photo by Dana Gray)

The Lift Up Thrift Shop is located on Eastern Avenue in St. Johnsbury. (Photo by Dana Gray)

Donated items are piled outside the Salvation Army Thrift Store on Monday, April 5, 2021. The stuff was left outside the closed store sometime over the weekend. Staff at the store say they cannot take donations when the store is closed; they're getting too many things that are too trashy to be sold in the store. (Courtesy Photo)

Thrift stores rely on donations of items to stock the shelves and fill the racks, but too many donors see it as a chance to pass their trash.

Workers at the stores trying to display things people will buy are spending time discarding donated garbage. Donations, they say, are supposed to support the charitable organizations not add a substantial cost to empty the dumpster.

H.O.P.E. in Lyndonville, the Salvation Army Thrift Store in St. Johnsbury and Lift Up Thrift Shop in St. Johnsbury all exist to raise money for community outreach, and all reported the challenges and cost of dealing with worthless items people donate.

“You take away from the help that we can give when we have to spend money to throw your stuff away,” said Paris Hope at the Salvation Army store.

Goodwill Northern New England released information earlier this week that noted that last year it was forced to dispose of 13,216,580 pounds of bad donations. Trash bills added up to $1,238,004.

“We are helping hundreds of people get back to work during the pandemic through our workforce programs. An additional million dollars could help us get so many more people into higher-paying jobs,” said Kelly Osborn, Goodwill’s senior vice president of client services.

At the local Salvation Army store, Hope said between 75 and 8o percent of donations will never make it to the sales racks or shelves because the stuff has no sales value. The store becomes a dumping ground.

“People don’t want to pay to throw things away, but we’re spending a fortune to have to get rid of it,” she said.

The backroom of the store is full of boxes and bags of donated items. It took only five days to fill up, and Hope said most of it is destined for the recycling center or trash heap.

Hope said she was hoping the regional Salvation Army box truck would show up soon to carry away the discarded items to make space for more donations.

The volume of items that have no sales value at the Lift Up Thrift Shop in Eastern Avenue is not as high as what the Salvation Army has to deal with, but shop volunteer, Beth Spaulding said it’s more than she’d like.

Recently she said she was going through a bag of donated clothes and out of an entire bag only one thing was worth displaying for sale.

“If you wouldn’t wear it because it’s stained, don’t donate it,” she said.

It’s the difference between what can be sold versus what may still have a use, said Spaulding.

People believe there is value in things they want to donate, but if the person shopping at the thrift shop wouldn’t see any value then the shop can’t take it.

Spaulding said people need to remember that retail stores like Walmart or the dollar stores are selling new products at low prices. It does the thrift shop no good for people to donate such items since the cost of new is not much more than the cost of used, she said.

While looking at a large pile of junk items at the Salvation Army, Hope said about 40 percent of it was left at the store when it was closed or when a store worker didn’t have a chance to sort through it before the donor left.

Haley Caplan, store manager at H.O.P.E. on Church Street in Lyndonville, also said their biggest problem with donated items that are trash is people leaving the stuff outside the store when it’s closed. Even a rope across the entrance doesn’t prevent people from going onto the porch to dump stuff, she said.

“We definitely do get a lot of items we can’t sell,” said Caplan. Last week among the things left as donations when the store was closed were McDonald’s bags that contained empty food wrappers.

Hope said they’ll get bags of stuff that had been sitting around outside people’s homes that contain animal feces and items coated in urine. She said earlier this year handling such donated garbage made her ill, forcing her to miss work.

When the stores do connect with donors to inspect the items before accepting them, the encounters don’t always go well if items are rejected.

“A lot of times people do get defensive when we tell them we can’t take their stuff,” said Haley.

At Lift Up, business and property owner, Frank Rothe said most people who come into the store accept the donation restrictions when they’re explained.

“We do a pretty good job of just talking to people,” he said. “That’s the whole thing; just communicating. If we’re careful and have these conversations as they’re donating, for the most part, they’re OK with that.”

He said the staff does a good job of controlling the donation flow to avoid too much garbage.

Part of the problem for the Salvation Army, he said, is the location away from the main street and the fact that it has a roof overhang that shields activity there. Lift Up is located on the busy Eastern Avenue and people are less likely to discard their garbage items there.

The Salvation Army store has had so many people drop off worthless products when it’s closed that a surveillance system was installed. Employees sometimes call the police.

Hope said donations are steady, but the big season of getting lots of discarded stuff is coming up.

“In the summertime, it’s worse because after the yard sales they bring everything they don’t sell, and obviously if you can’t sell it at yard sale prices, we can’t sell it either,” she said.

She said a little consideration would go a long way.

“We just ask that people would be more considerate of us. We love our customers. We love the donations, but think about what we can actually sell and try to lower our costs of what we have to throw away because it cuts into what goes back into the communities,” she said.

The thrift stores are not out to turn a business profit. They exist to help others.

“For the Salvation Army, 90 cents of every dollar goes back into communities,” said Hope. “This truly is a charity.”

Money from Lift Up sales supports the Mustard Seed Soup Kitchen across Eastern Avenue from the shop. The cost of dealing with items that can’t be sold impacts the outreach.

“Anything that costs us money to get rid of defeats the purpose of trying to raise money for the soup kitchen,” said Spaulding.

H.O.P.E. serves the community in several ways, including the Backpack food program and providing clothing vouchers to those in need.

“We are a non-profit,” said Caplan. “Everything that we make from the store goes to benefit our services,” she said. “If we are spending money on throwing stuff out, that’s less money we have to go to those services.”

States where food stamps are used the most

Most rural counties in Kentucky

Most rural counties in Kansas

Most rural counties in Michigan

Most rural counties in Nevada

Most rural counties in New Jersey

Most rural counties in Minnesota

Most rural counties in Missouri

Most rural parishes in Louisiana

Most rural counties in Maine

Most rural counties in Indiana

Most rural counties in Maryland

Most rural counties in Iowa

Most rural counties in Massachusetts

Most rural counties in South Carolina

Most rural counties in Tennessee

Most rural counties in Mississippi

Most rural counties in Ohio

Most rural counties in New Mexico

Most rural counties in North Carolina

Most rural counties in New York

Most rural counties in Oklahoma

Most rural counties in Oregon

Most rural counties in Pennsylvania

Most rural counties in Rhode Island

Most rural counties in Washington

Most rural counties in Wisconsin

Most rural counties in Virginia

Most rural counties in Texas

Most rural counties in Utah

Richest people in the world

Counties with the highest COVID-19 death rate in Minnesota

Counties with the highest COVID-19 death rate in California

Parishes with the highest COVID-19 death rate in Louisiana