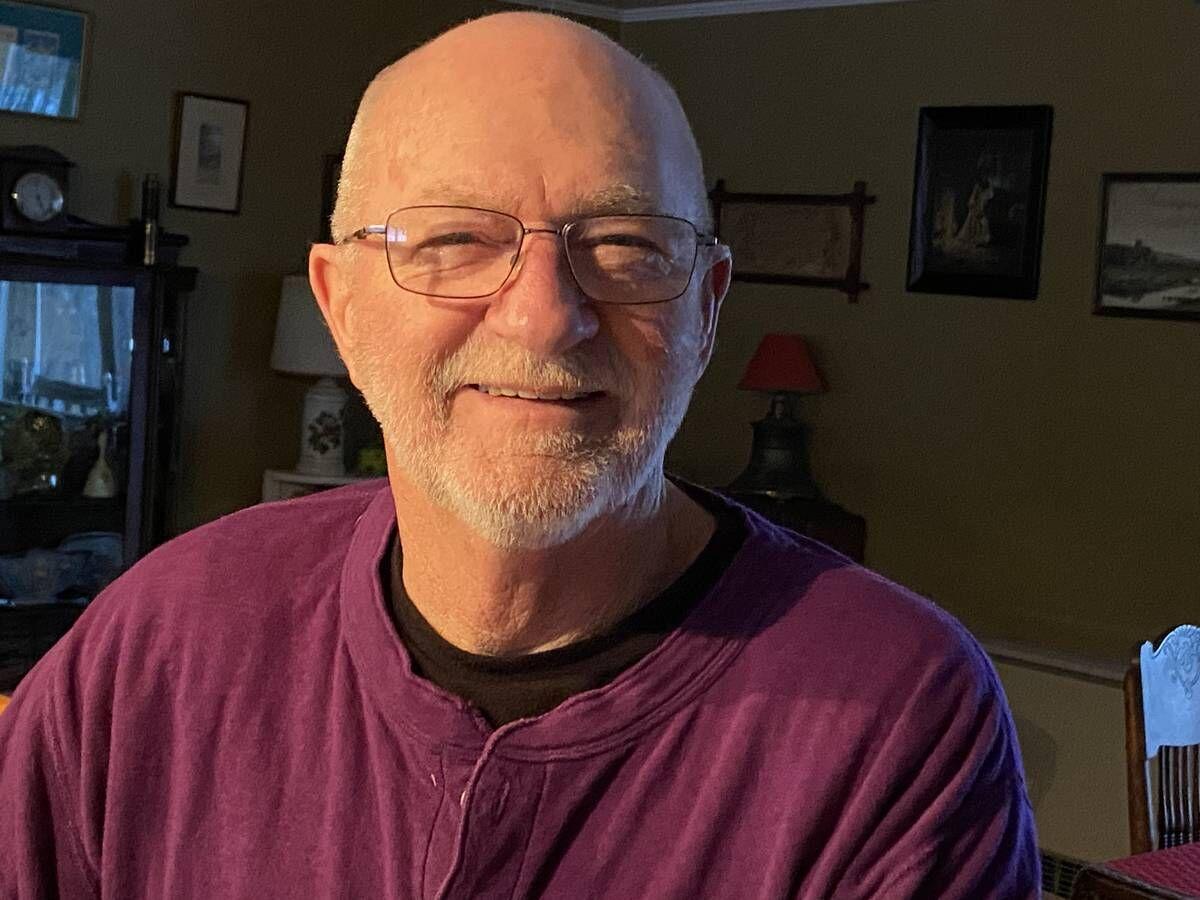 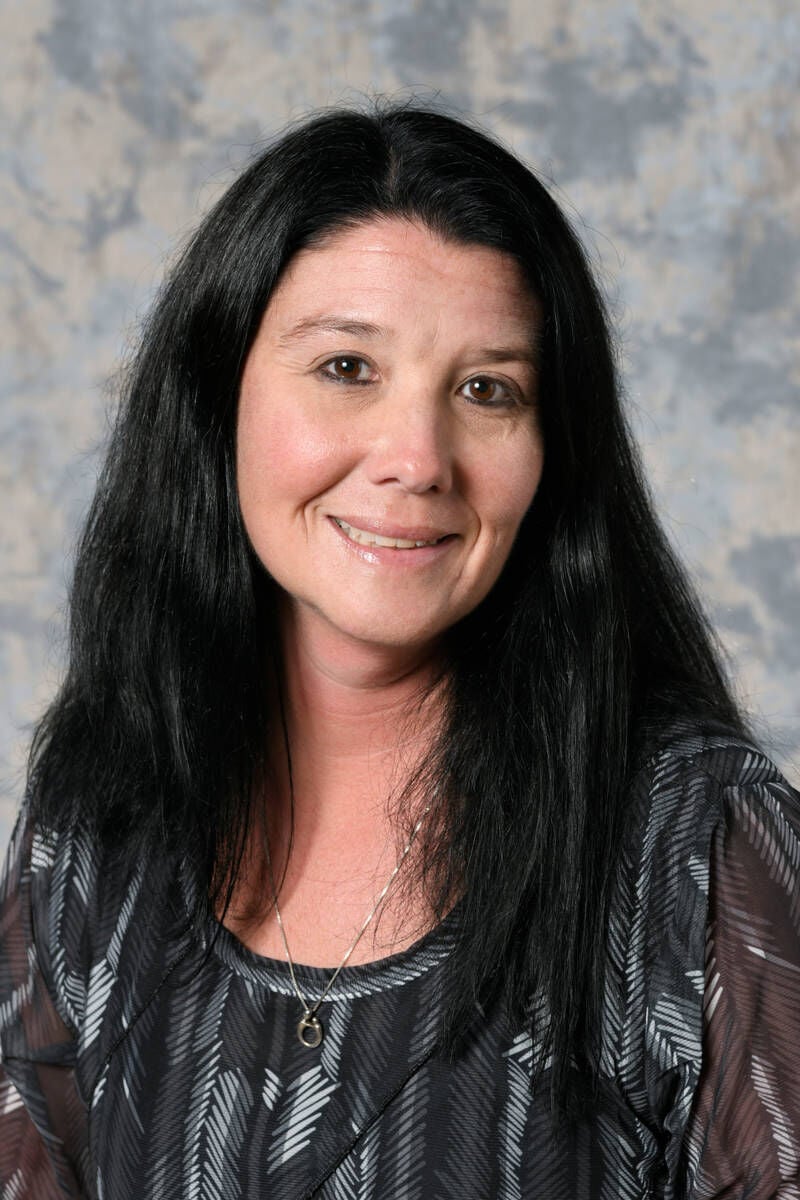 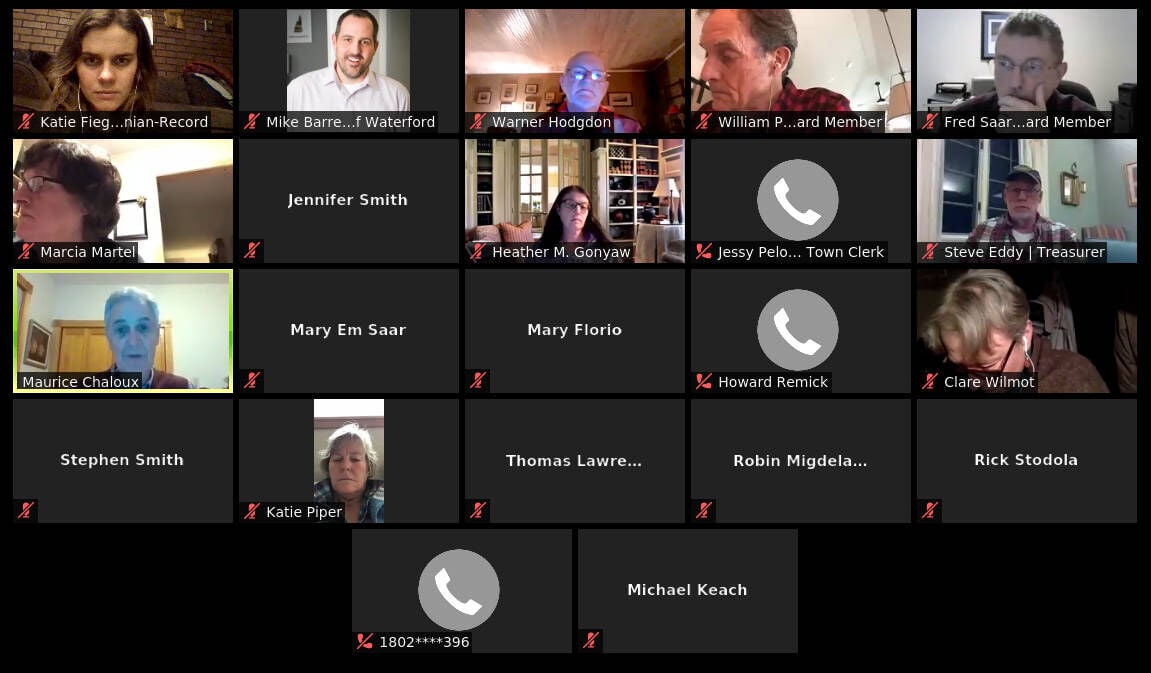 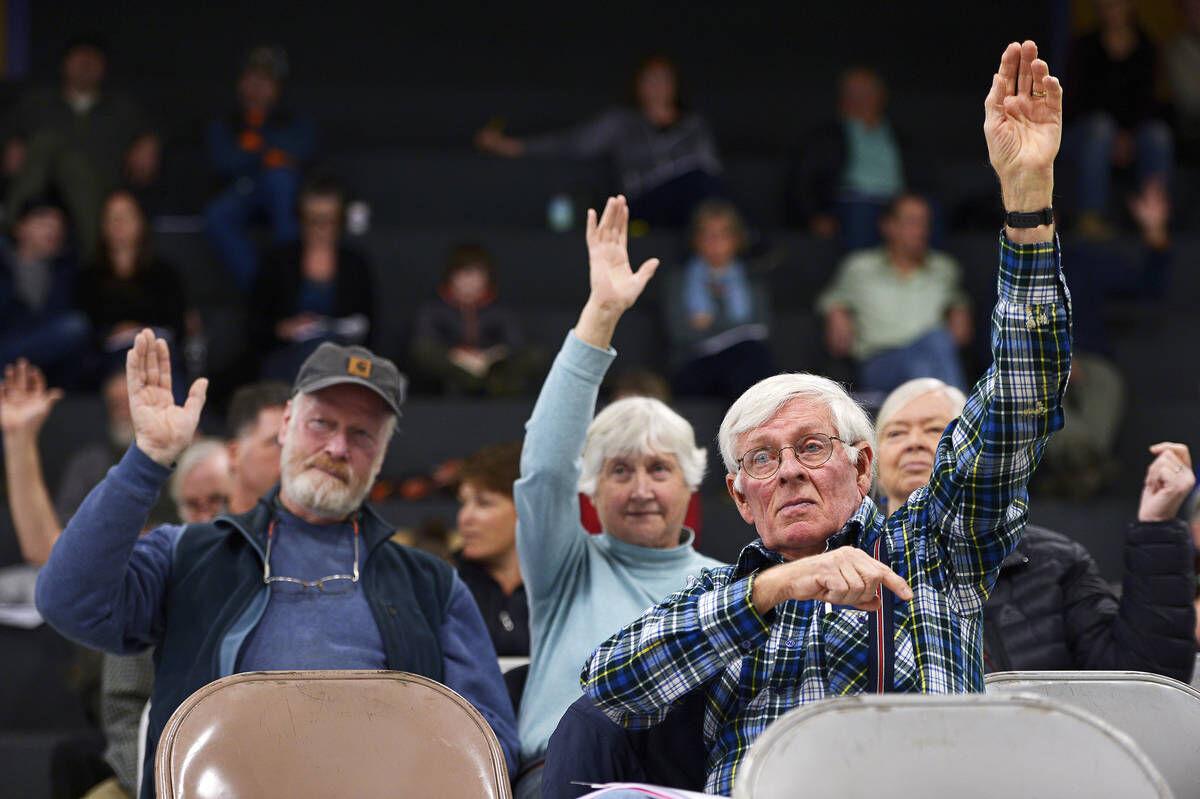 In this file photo from 2018, David Morrison, front right, and others raise their hands in support of a morning start for the Waterford Town Meeting. (File photo by Paul Hayes) 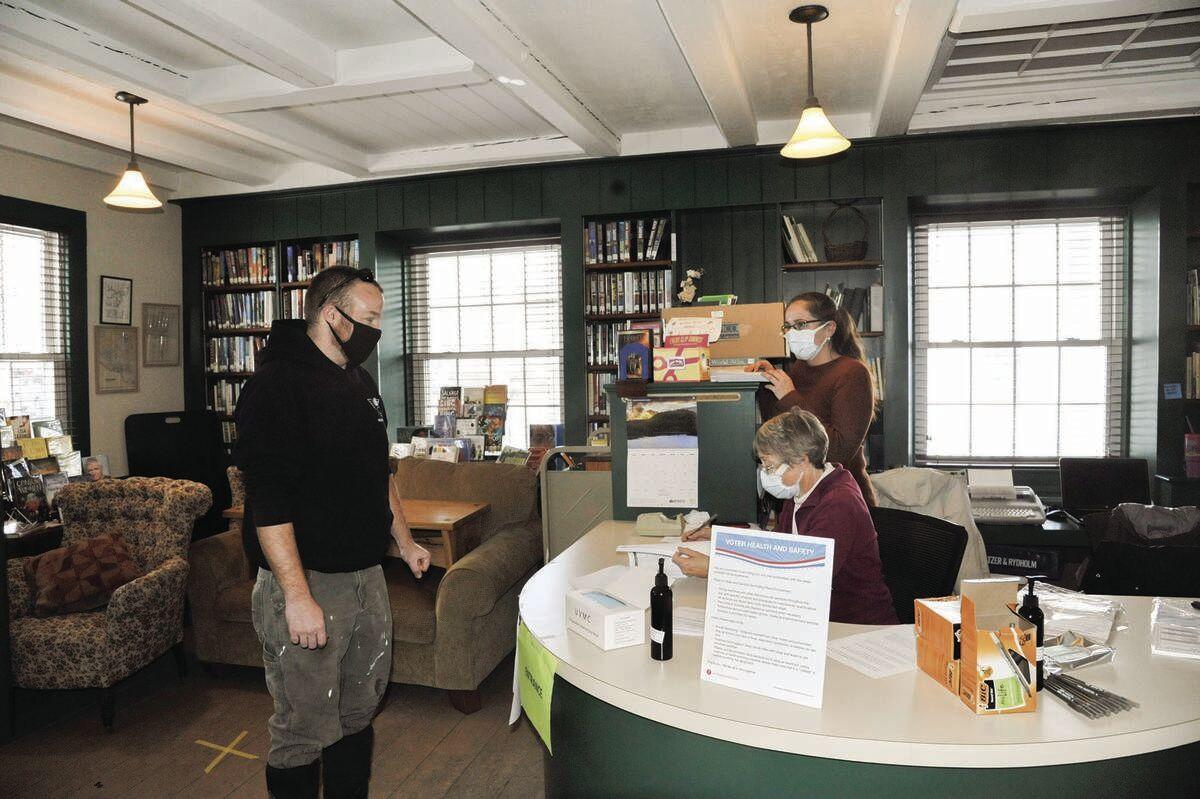 In this file photo from November 2020, former Waterford Town Clerk Joanne Jurentkuff checks in voter Greg Lawson at the Davies Memorial Library, while current Town Clerk Jessy Pelow stands by. The town's polling place was moved to the library from the school because of COVID concerns about mixing members of the community with students on a school day. (File photo by Dana Gray)

In this file photo from 2018, David Morrison, front right, and others raise their hands in support of a morning start for the Waterford Town Meeting. (File photo by Paul Hayes)

In this file photo from November 2020, former Waterford Town Clerk Joanne Jurentkuff checks in voter Greg Lawson at the Davies Memorial Library, while current Town Clerk Jessy Pelow stands by. The town's polling place was moved to the library from the school because of COVID concerns about mixing members of the community with students on a school day. (File photo by Dana Gray)

Waterford held a short and sweet informational meeting on Monday night ahead of the upcoming March 2 election.

Moderator Maurice Chaloux is out of a job this year with town meeting traded in for an Australian ballot election. However, he was asked to moderate the thirty-minute Zoom meeting which drew 23 participants and is available to re-watch on the town’s Facebook page.

Gary Allard, outgoing select board chair, was unable to attend due to a family emergency. However, select board member William Piper read a note from Allard thanking residents for their support during his past 20 years spent serving the community on the select and school boards.

“It’s time for fresh ideas and a new outlook, and I wish my successor well,” Allard wrote.

Candidates Heather Gonyaw and Warner Hodgdon are running for the three-year seat. Both have lived in Waterford for over a decade, are native Vermonters, and have experience with town or school governance.

Gonyaw, who serves as associate state director for the Vermont Small Business Development Center, was born and raised in the NEK and has lived in Waterford for the past 12 years.

She has served for the past nine years on the local school district and supervisory union boards, pre-and post-merger.

“It was always my plan to step off the school board when my current term expired, however, I think it is important to continue to be involved in my community,” she said.

“If elected I would work collaboratively with area organizations to move forward in securing equitable access to broadband, expanded cell phone coverage for the area,” she told the Caledonian in an email. “Also, Waterford has an aging population and that affects our tax base. I believe that my experience and understanding of education financing would help the budgeting conversations.

“I’d also like to advocate for more volunteerism in the town (for example at the fire department or at the school),” Gonyaw added.

She said she would bring her almost 20 years of experience in grants, financial management, budgeting, reporting and compliance on the state and federal level to the position of select board member.

“There are some tough conversations that are going to be coming in the near future regarding the economic stability of towns and how to best advocate for what support the town needs from both the Federal and State governments,” Gonyaw wrote. “I have the experience and skill to navigate these conversations.”

Hodgdon, retired after a career in the military and engineering, has lived in Waterford for the past 25 years.

He served previously as a multi-term selectman in Westminster, Vt., and believes that experience will enable him to hit the ground running.

“My decades of engineering and management experience along with leadership and tough decision-making have produced the skills to make me the best candidate for the job,” he wrote in an email with the Caledonian. “I have worked as a land manager and developed new material sources for construction companies. Additionally, I have managed environmental compliance, safety, and production plants … operations are my strong point!”

Hodgdon said during the information session that he hopes to contribute to the town by seeking out new sources of material for the roads as well as planning ahead for the future of the town.

“The management of current town resources while seeking out new ones is a priority,” he wrote. “Also, planning for future town office needs, while figuring out how to make it happen in a way that will be affordable is very important. We need to continue to move Waterford forward while maintaining its history and small-town charm.”

Hodgdon wrote that he believes common sense is a great place to start addressing any situation.

“I have been a leader my entire life and welcome the opportunity to serve!” he wrote.

Moderator Chaloux gave details of other candidates for town offices — all other races are uncontested — and read through the warrant articles, many of which ask townspeople to give their blessing on the town’s regular appropriations to organizations such as Umbrella, the NEK Council on Aging, and the Fairbanks Museum and Planetarium.

Town Clerk Jessy Pelow is running to also serve as town treasurer, a position she has been filling already as Steven Eddy has retired.

Both incumbent constables (Thomas Lawrence, first constable; Anthony Gallotto, second constable) are running as write-in candidates due to not getting the forms to be on the ballot turned in on time.

The only comment made during the warrant articles came from Rep. Marcia Martel, R-Waterford, who commended the board for coming up with a budget with the unique number of $1,234,566.

Fred Saar, select board member, pointed out it was the same number as last year and a lot of work was put into keeping it that way.

At the end of the meeting, Piper provided an update on NEK Broadband, a communications district working towards improving broadband access in the area that Waterford residents voted to join last year.

Piper, the Waterford representative for the communications district, said there is information on the town website on what they are doing and anyone with questions should email williambpiper@gmail.com.

“It’s going to take a while to get broadband ubiquitously in the Northeast Kingdom,” he said. “It’s going to be a multi-year task but it is underway and it is going well so far.”

100 best documentaries of all time, according to critics

Black artists music wouldn't be the same without

Most famous actor born the same year as you

A timeline of WWI, the first global conflict

A timeline of farmers’ protests in India

States with the most liberals

Black history from the year you were born

When can I get vaccinated? And answers to 30 other coronavirus questions

Best animated films of all time, according to critics

What you need to know about COVID-19 testing options