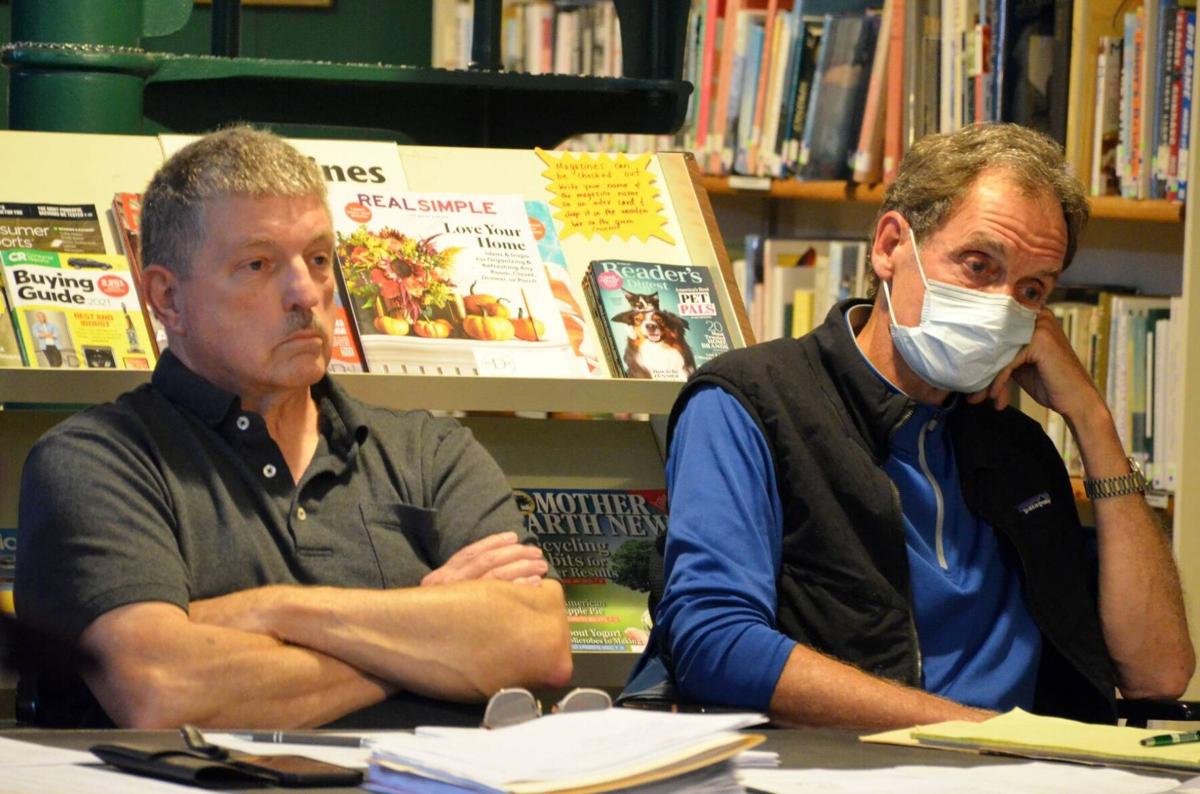 Waterford select board chair Fred Saar (on left) and select board member Bill Piper (on right) listen to a citizen's concern during their regular meeting on Oct. 11, 2021. (Photo by Katherine Fiegenbaum) 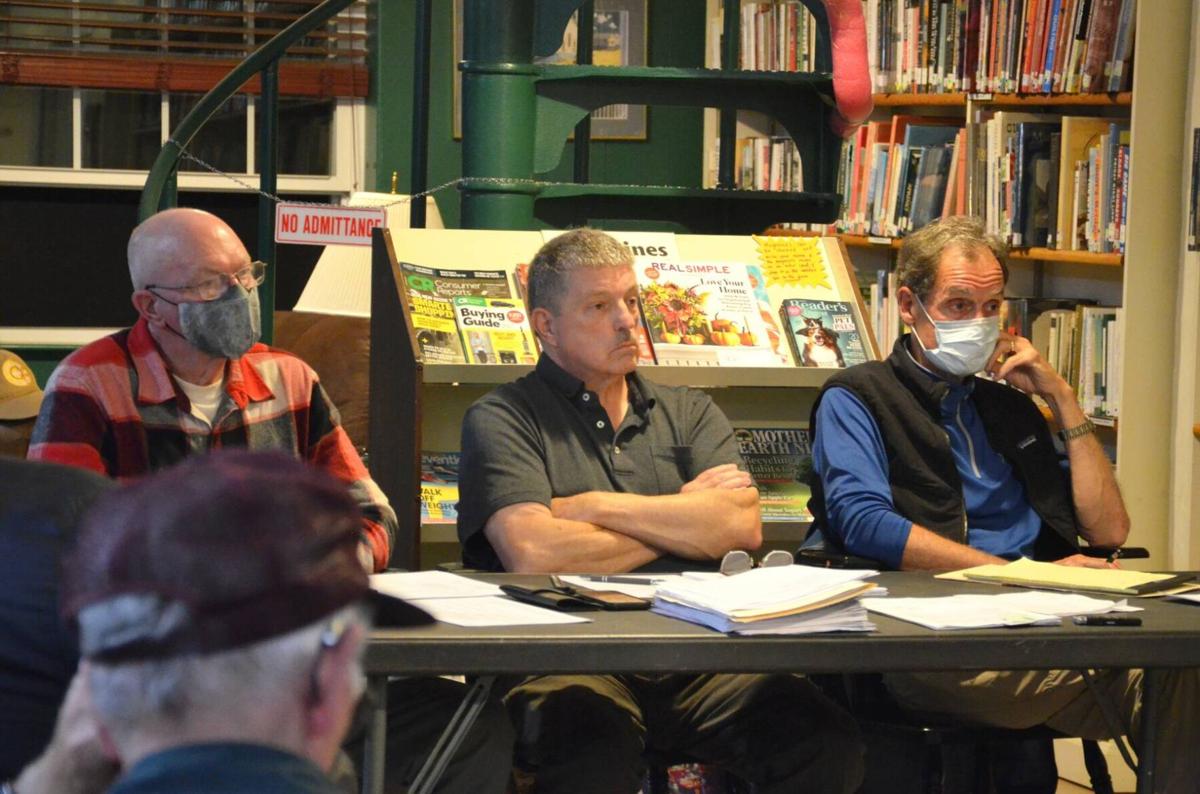 Waterford select board chair Fred Saar (on left) and select board member Bill Piper (on right) listen to a citizen's concern during their regular meeting on Oct. 11, 2021. (Photo by Katherine Fiegenbaum)

Waterford select board chair Fred Saar was under fire right from the start of Monday evening’s regular board meeting.

The “citizen’s concerns” portion of the meeting began with over twenty minutes of dialogue between Jim Hayes, a full-time employee of the town of Waterford for the past ten years and a former select board member in Concord, Vt., his wife, Kristina Hayes, and Saar.

The issues raised by the Hayes’ had nothing to do with the board’s handling of the dismissal of the former Waterford delinquent tax collector this past March, nor the petition addressing the town’s spending that was originally filed in August. The couple’s concerns revolved around two separate problems: that the town had failed to notify their family about changes in their health insurance and that, according to Kristina Hayes, Saar was rude in his communication with her.

“I’m a little unsure where to start,” began Kristina Hayes on Monday evening. “My citizen’s concern is that your [Fred Saar’s] behavior towards me was belligerent, disrespectful, rude and condescending. In all my years — I’ve had a business for over 30 years, and I have never been subjected to anything like the way you spoke and angled this.”

“I have pretty thick skin, I’m not easily offended and this was completely uncalled for,” Kristina Hayes continued. “It had nothing to do with my insurance question. You never once asked me one question.”

Kristina Hayes went on to explain in detail her interactions with Saar on the phone last week.

“You [Fred Saar] really tried to point out a lot of key factors to me: about you needed to prioritize because you were being attacked at the town level … you talked about needing to get a new excavator and I kept trying to say ‘excuse me, I don’t live in Waterford, I just want to talk to you about my insurance because that is a benefit to my husband and we are having problems now in terms of bills and whatnot,’” she said.

Kristina Hayes then described calling the Town Clerk’s office and speaking with Donna Berry, assistant town clerk and treasurer, to clarify the time of Monday night’s select board meeting. Not long after, Hayes said she received another call from Saar.

“You told me to keep this with one person — meaning you,” said Hayes. “I didn’t appreciate that. […] You said to me, ‘you probably didn’t even bother reading your [HRA card].’ Do you remember saying that?”

“I do not,” Saar replied. “This entire conversation doesn’t sound like me.”

Multiple members of the audience, which amounted to about two dozen citizens, chuckled.

“Okay,” said Kristina Hayes, holding up a paper full of notes. “This is what I did when I hung up. I made notes, lots of notes, because I was really taken off guard and I was pretty upset. You didn’t hurt my feelings, but I couldn’t believe as a representative of the town of Waterford that you would speak to any woman like that. Because I can tell you, my son would never speak to another person like you spoke to me two days in a row … and all I wanted you to say was ‘let me look into it and we’ll figure it out.’”

Jim, a member of the highway department, and Kristina Hayes went on to discuss their insurance issue — the HRA stipend had been lowered from $5,000 a year to $4,000 for families, and while their family had gone over $4,000 at least three times in the past six years, they were not notified of the benefit change — and how they had tried to address it with their insurance company, the town clerk, and by reading through in great detail. Jim Hayes also explained that when Kristina got off the phone with Saar, she was visibly shaking and crying.

“I was not happy with you about this,” Jim told Saar. “I called Warner [Hodgdon, a first-year member of the select board] and spoke to him on the phone, and I explained to him what you had done. I’m not impressed by your behavior Fred, at all.”

“I apologize,” said Saar. “I didn’t feel like I was being out of line.”

Bill Piper, the third select board member, stepped in.

“This is the first time I’ve heard of this,” said Piper. “Clearly, rude behavior by the selectmen to the public or by the public to the selectmen is not acceptable behavior, there’s no question about that. I just heard Fred apologize […] and I’m sure Fred got the message loud and clear.”

“I don’t know what was said, but clearly you were upset by it, and that’s not anything the select board would want any citizen to come away from a discussion with,” added Piper. “That won’t happen again, I’m sure. We do have a fairly full agenda, so I really think we need to move on unless there’s something else.”

Piper explained that the board would look into the health insurance issue as part of their budgeting process in the upcoming months, to be determined after the newest health insurance contract is looked at for the second time in November.

“We’ve got to figure out the balance between treating employees right and phasing in changes and treating the taxpayers right,” Piper said following the meeting, adding that he hoped Kristina Hayes was satisfied with the apology.

When asked for further comment on Hayes’ complaint regarding his conduct on Tuesday afternoon, Saar wrote in an email: “Kristina’s recollection of the conversation does not sound like me. Otherwise, it’s a ‘she said, he said’ [situation].”

Hodgdon, who joined the board this March, agreed.

“I can’t speak to Fred’s behavior, because invariably that’s a ‘he said, she said’ and ‘I didn’t say’ sort of thing,” Hodgdon said on Wednesday afternoon. “I just passed [their] concern along and I think what I assumed turned out to be correct: employees apparently were not informed that the payment was reduced, which is unfortunate.”

On Wednesday evening, Kristina Hayes told the Caledonian-Record that she and her husband were not satisfied with their interaction with the board.

“We didn’t get any satisfactory answers from the select board pertaining to the insurance issues,” she wrote in an email. “We failed to understand the reasoning behind their decision-making process. When my husband started working for the town, the insurance was part of his pay package and has been right along. It would have been nice of the town to at least notify us of any changes.”

“I feel like the board was very dismissive and uninterested in reference to the handling of Mr. Saar as the chairmen of the board,” Kristina Hayes concluded.

The aforementioned petition and many other issues were discussed at Monday night’s select board meeting and will be reported on in forthcoming issues of the Caledonian-Record. An audio recording of the citizen’s complaint in question and ensuing discussion will be posted on our website.

While citizens and town officials noted and discussed a multitude of concerns during Waterford’s select board meeting on Oct. 11, the threat of the COVID-19 virus and its increased caseload in the Northeast Kingdom ran throughout.