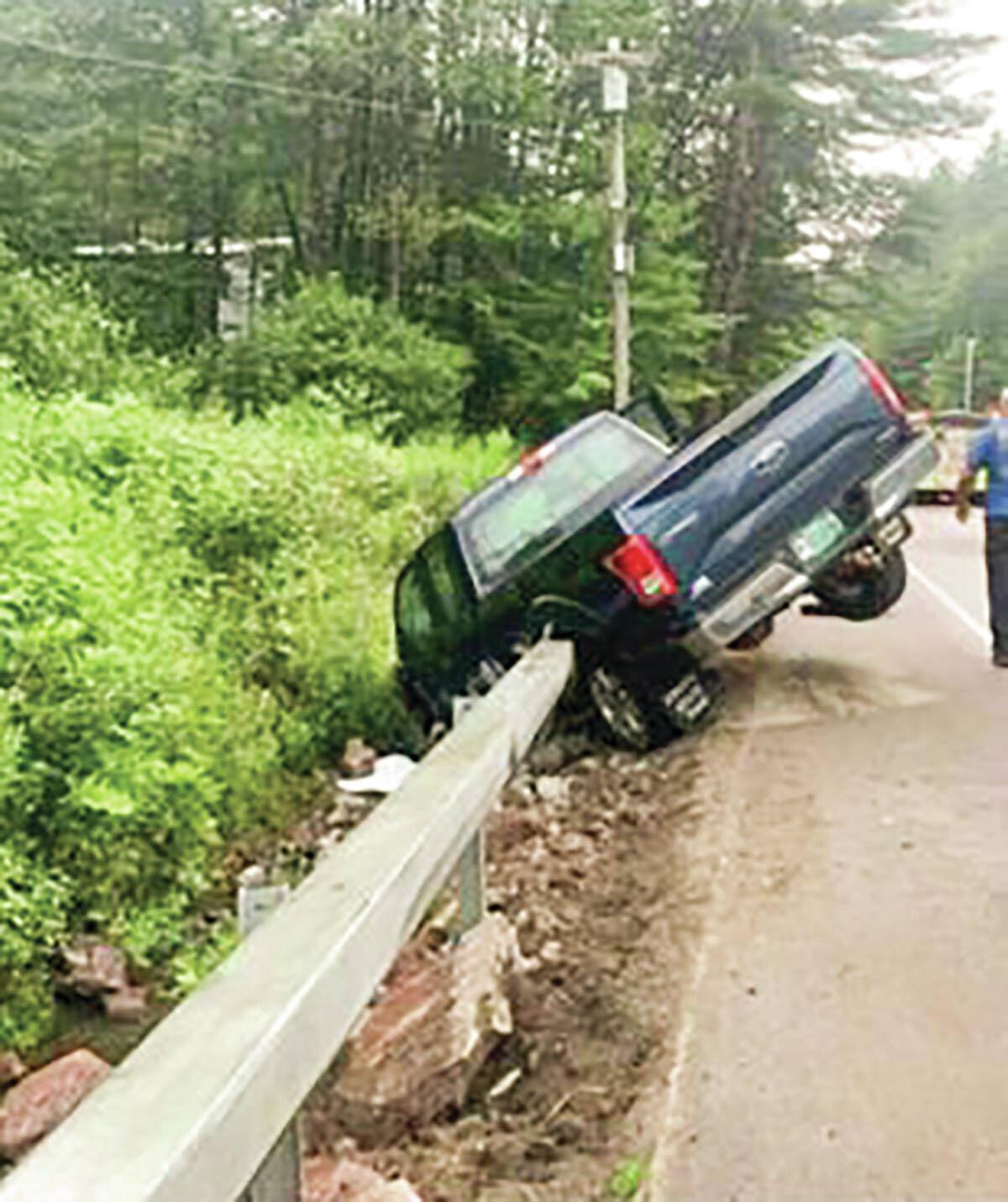 Keith Taylor's Ford truck is crashed off Route 100 in Stowe on Tuesday, July 27, 2021. It wasn't until Taylor saw this picture on social media that he knew where his stolen truck was. The photo was taken and shared by another driver involved in the crash. (Contributed photo) 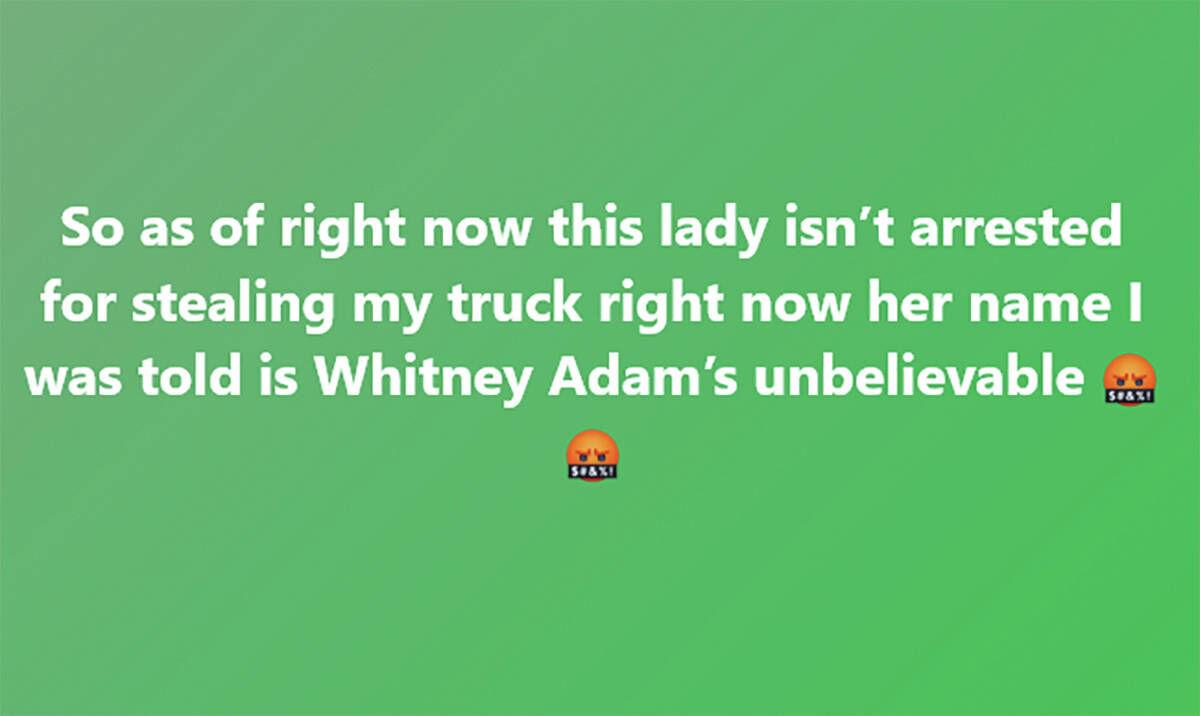 Keith Taylor posted this message on his social media space shortly after his stolen truck was found totaled in a crash in Stowe. (Contributed photo)

Keith Taylor's Ford truck is crashed off Route 100 in Stowe on Tuesday, July 27, 2021. It wasn't until Taylor saw this picture on social media that he knew where his stolen truck was. The photo was taken and shared by another driver involved in the crash. (Contributed photo)

Keith Taylor posted this message on his social media space shortly after his stolen truck was found totaled in a crash in Stowe. (Contributed photo)

ST. JOHNSBURY — A truck stolen from Summer Street on Tuesday crashed three hours later in Stowe, and the suspected thief walked away.

Keith Taylor, 42, of St. Johnsbury, had parked his blue 2016 Ford F150 extended cab truck in a parking space on Summer Street near his workplace, Classic Designs by Matthew Burak, when a woman later identified as Whitney Adams, 34, of Eden Mills, reportedly got into the truck and drove off.

Taylor said his intention was to park the truck for a moment in order to move a trailer with a different vehicle.

“This woman must have seen me set my keys on the seat,” he said.

Other people Taylor was working with saw the truck leave the parking space and got Taylor’s attention. He started running after his truck.

The truck turned onto Central Street and Taylor could not catch up to it. He said he watched it turn right onto Main Street by the St. Johnsbury House. It was the last he saw of his truck until a few hours later when someone posted pictures of it totaled in a crash on Route 1oo in Stowe.

St. Johnsbury Police were alerted about the truck theft at about 10:30 a.m. A BOLO (be-on-the-lookout) was broadcast by pubic safety dispatch, and officers began to investigate.

It was determined that a camera mounted to the outside of Dr. Bob’s House recorded the thief as she walked toward the truck. The police posted pictures of the woman to their social media space.

What didn’t get done quickly was the entry of the incident into the National Crime Information Center, so when Stowe Police encountered the Ford truck smashed on the side of Route 100 they didn’t know at the time that it had been stolen.

Stowe Police Chief Donald Hull said the responding officer knew the female driver was not the registered owner, but the officer had no reason to believe the driver didn’t have permission from Taylor to drive the truck.

Adams was located in the process of trying to leave the scene of the crash, which was reported to have involved multiple vehicles. It was caused by Adams, according to Chief Hull, who said in an email that she drove the truck across the centerline.

It was another driver in the crash who informed Taylor about the location of his truck.

“It’s about 2 p.m. and I’m seeing my truck in a ditch (from a photo shared on social media),” said Taylor. “‘I think I found your truck, Sir,’” Taylor recalled from the note connected to the social media post.

St. Johnsbury Police Capt. Jason Gray also said he found out about the truck’s location from social media. He said he then called Stowe PD to discuss the fact that it was stolen from St. Johnsbury earlier in the day. That call came about two hours after the crash, said Chief Hull.

Gray said the stolen vehicle information should have been entered sooner into NCIC. It could have made a difference in whether Adams was allowed to walk away following the crash.

“It wasn’t in NCIC in time,” he said. “Dispatch enters the information, but it didn’t get entered until after the crash time … it was a group effort of dropping the ball.”

Stowe Police did determine at the crash scene that Adams had been driving while under license suspension and she had left the scene of the crash. Chief Hull said she was cited for those crimes, and a charge of operating a vehicle without the owner’s consent will be added to the citation. In addition, she was ticketed for failing to stay in her lane of travel.

Taylor said he wondered about another possible crime related to drug paraphernalia found in the truck that he believes Adams left behind. According to Taylor, Stowe Police said they couldn’t acknowledge anything found in the vehicle because they did not have permission from the owner to search the vehicle.

Capt. Gray said a couple of previous encounters with Adams in town are connected to drug activity.

Taylor said he is upset that even though police know who stole his truck and they know where she lives they haven’t arrested her yet. He said Capt. Gray shared his frustration but told him Vermont law does not allow for an arrest warrant in these types of circumstances until a legitimate effort to cite someone has been made first.

A citation is a written directive for a person to go to court on a specific date and time and be arraigned on criminal charges.

Capt. Gray said he has asked the Williston State Police barracks to assist with the effort to cite Adams. She will face a felony charge of operating a vehicle without the owner’s consent.

As for Taylor, he’s working through his insurance company concerning his totaled truck, which he said he just bought in May. The damage is done, he said, but he wants justice for the person suspected of stealing his truck.

“This woman needs to be caught and held accountable,” he said.

Excellent column Dana ! Thank you for all your efforts to have the word out