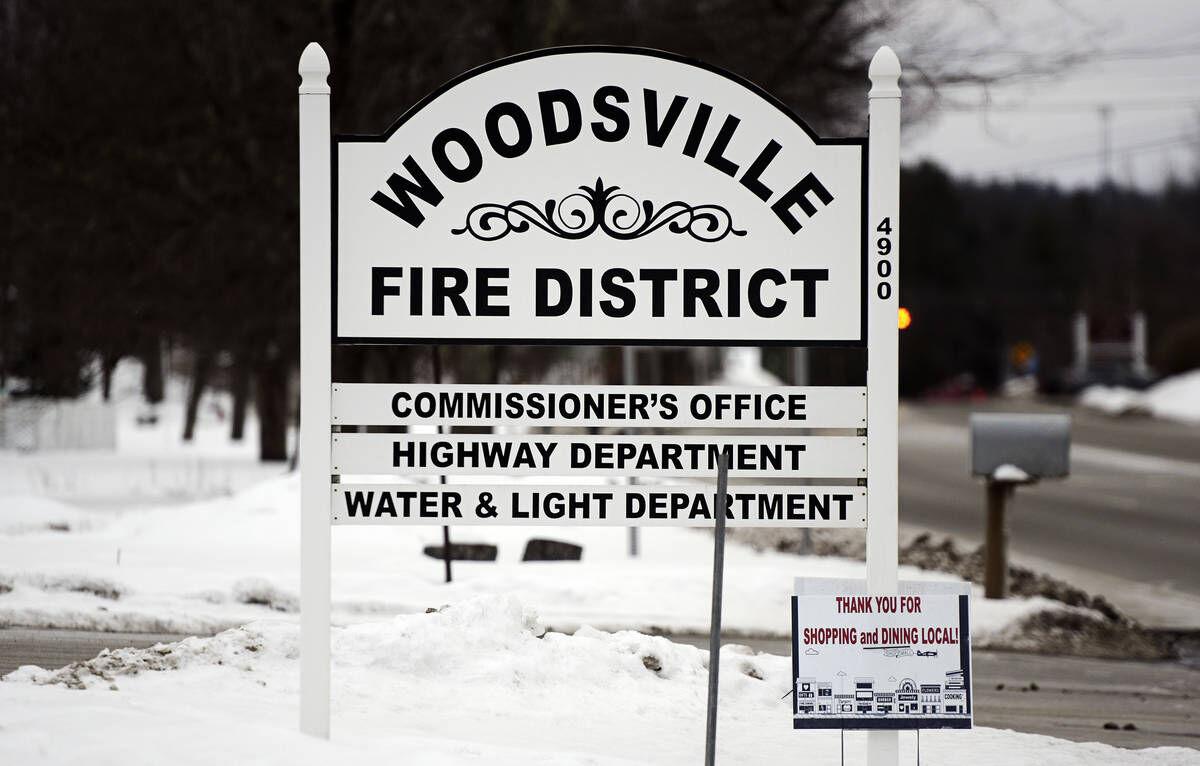 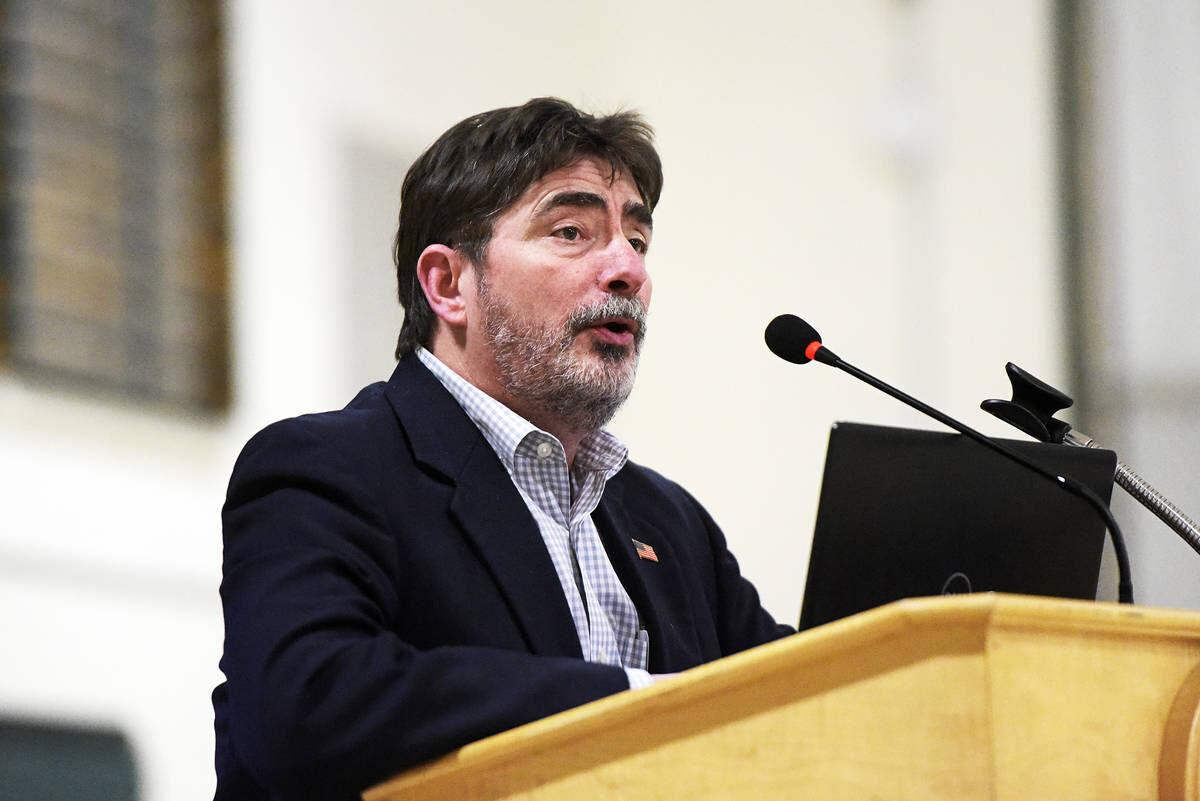 Woodsville Precinct administrator Kevin Shelton speaks during the presentation of 2015 and 2016 audit results at the Dr. John A. Bagonzi Community Building in Woodsville, N.H., on Tuesday, March 2, 2021. (Photo by Paul Hayes) 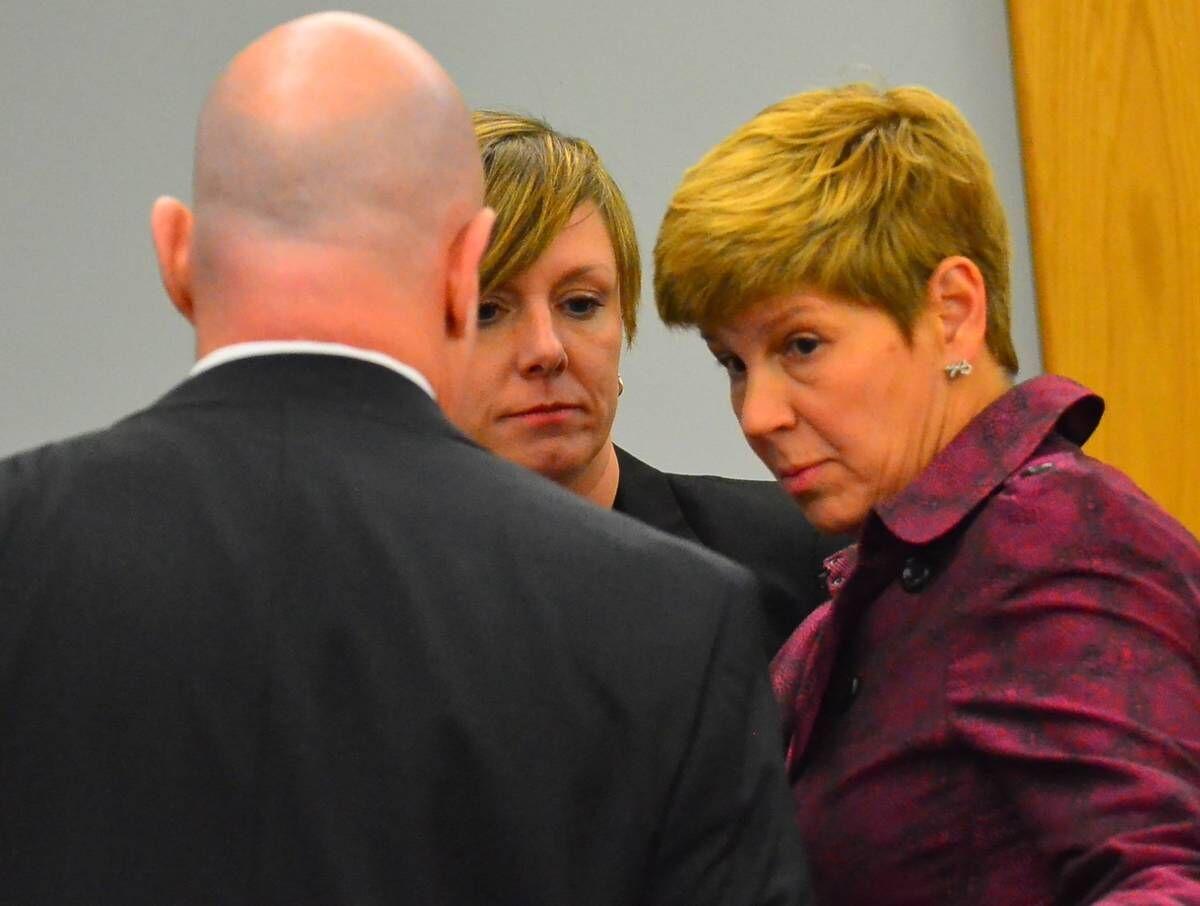 State prosecutor Jane Young, shown here at right during a Lancaster District Court appearance in 2017, determined that the Woodsville Fire District committed unlawful electioneering when administrator Kevin Shelton sent a letter to district voters, asking them to support a select board candidate and reject a warrant article. (Photo by Robert Blechl)

Woodsville Precinct administrator Kevin Shelton speaks during the presentation of 2015 and 2016 audit results at the Dr. John A. Bagonzi Community Building in Woodsville, N.H., on Tuesday, March 2, 2021. (Photo by Paul Hayes)

State prosecutor Jane Young, shown here at right during a Lancaster District Court appearance in 2017, determined that the Woodsville Fire District committed unlawful electioneering when administrator Kevin Shelton sent a letter to district voters, asking them to support a select board candidate and reject a warrant article. (Photo by Robert Blechl)

The Woodsville Fire District received a slap on the wrist last month for committing electioneering violations.

In a cease and desist letter dated March 26, Young states, “we have determined the letter you issued upon the Woodsville Fire District’s letterhead constitutes impermissible electioneering by a public employee.”

Through the fire district’s legal counsel, Shelton said he was unaware of the electioneering law when he sent the letter, and now understands why he should not have sent it.

Under the plan, a formal electioneering policy will be included in the employee handbook, the police will be explained to all district employees by April 30, and new hires will have the policy explained to them during orientation.

The policy states that “All employees of the Woodsville Fire District, to include Woodsville Water and light EMS, Fire Department and/or Highway are prohibited from electioneering as a public employee while in the performance of your official duties or and are also prohibited to use government property, including, but not limited to, telephones, facsimile machines, vehicles, and computers to electioneer.”

It continues “The definition of electioneering means to act in any way specifically designed to influence the vote of a voter on any question or office” and states that employees found in violation of the policy will be subject to discipline or dismissal.

The Woodsville Fire Precinct letter dated Feb. 26 was sent out a week-and-a-half before the town’s virtual town meeting.

It asked voters to support Graham, noting he “is a resident of the Woodsville Fire District, a businessman, and a former Selectman. He cares about unifying the Town of Haverhill. This is in contrast to Darwin Clogston, the current Select-Board member, and Chairman, who has stated publicly that his goal over the next three years is to do away with the Precinct form of Government,”

It also urged residents to “vote NO on article #2 at the Town Meeting.” It falsely promised that “Doing so will allow the community as a whole, to debate the articles and to be properly informed” and added that “The current format, although a legal option, leaves a lot to be desired and allows the Selectboard to amend final articles, without debate from the floor.”

It’s unclear if the Woodsville Fire Precinct letter played a part in the outcome. However, voters ultimately supported both of the letter’s recommendations.

Article 2 — to approve temporary optional town meeting procedures allowed by House Bill 1129 during the COVID-19 State of Emergency — failed 409-264. As a result, the entire 34-item ballot was invalidated and every request, including the proposed $4.6 million operating budget and over $59,000 for social service organizations, were scrapped.

In addition to advocating for Graham and against Article 2, the letter opposed the town’s creation of a single, Haverhill Fire department through the merging of three precinct fire departments: North Haverhill, Haverhill Corner and Woodsville.

This was not deemed electioneering by Young.

Woodsville is the lone holdout to the plan. Its voters rejected the proposal at this year’s annual precinct meeting. Because Haverhill is only funding the town department, precinct taxpayers will bear the full cost of Woodsville Fire operations in 2021.