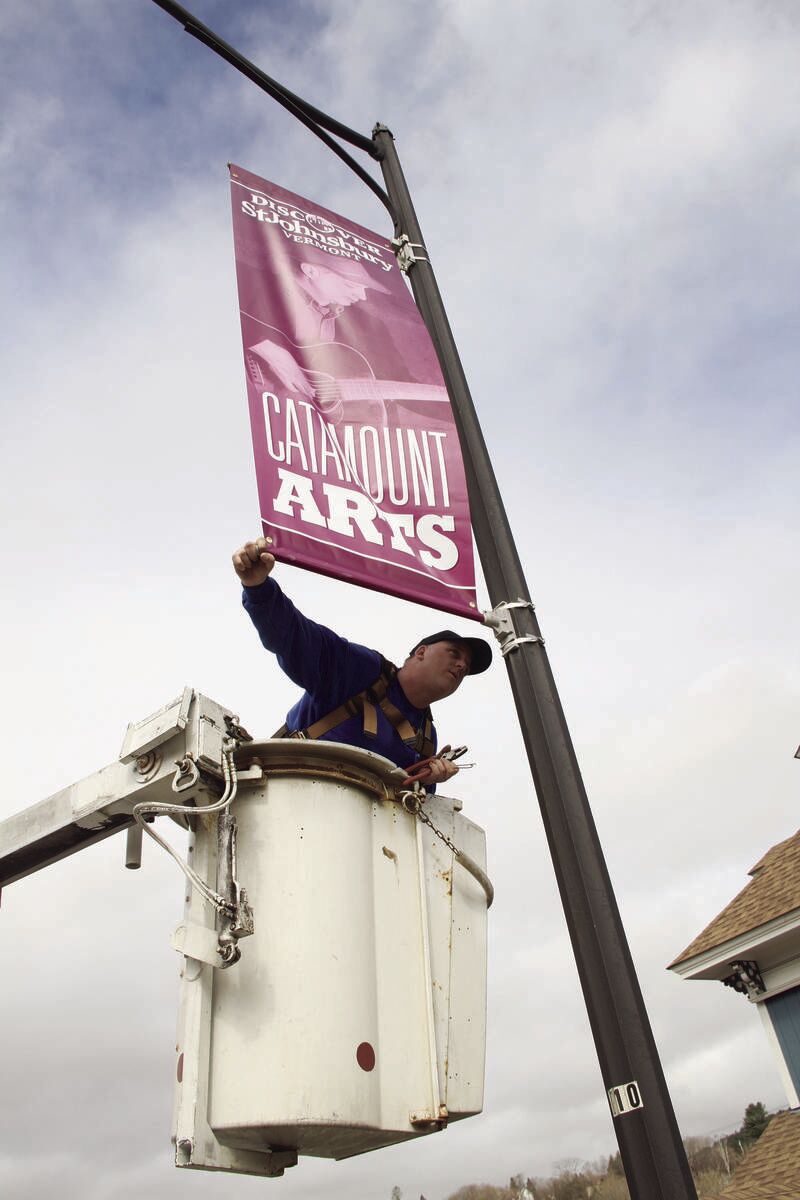 In this file photo from April 2017, Nicholas Nutter from Sutton River Electric adjusts a banner on a pole on Memorial Bridge in St. Johnsbury. The banner promoting the presence of Catamount Arts in town is one of many displayed to celebrate the town and its cultural offerings. (Photo by Dana Gray) 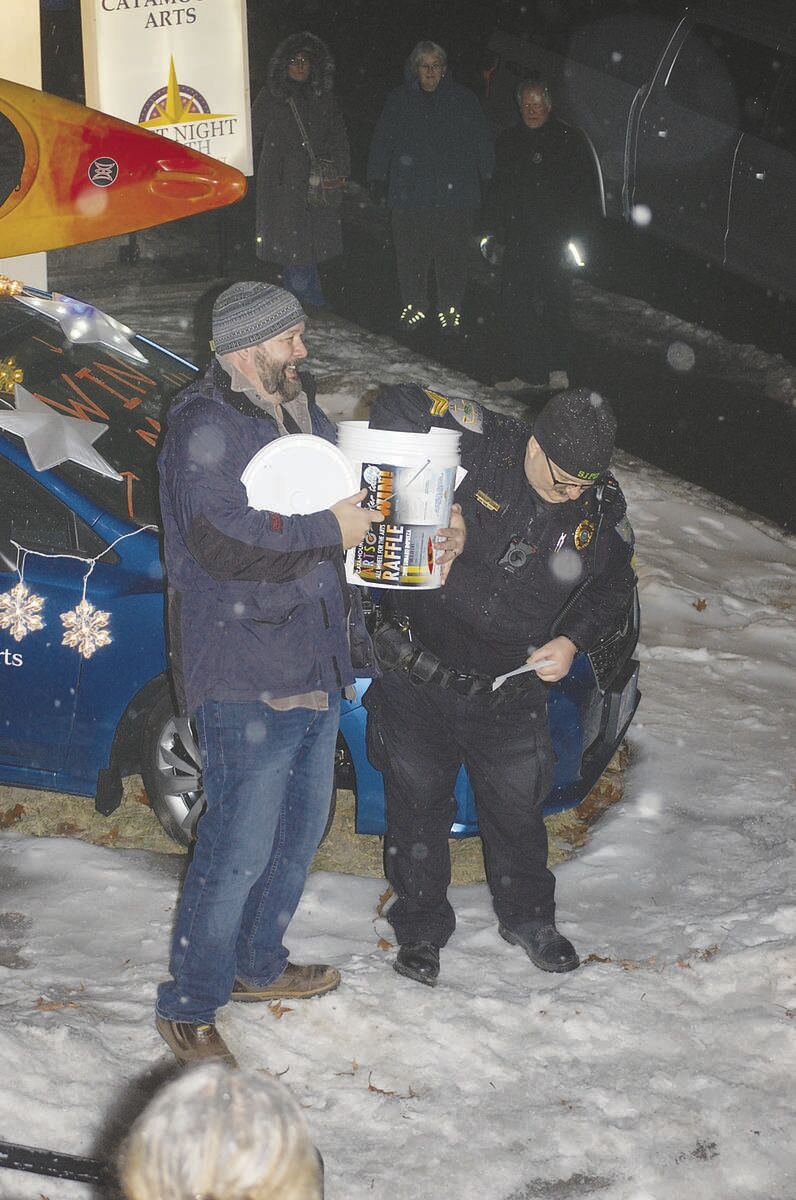 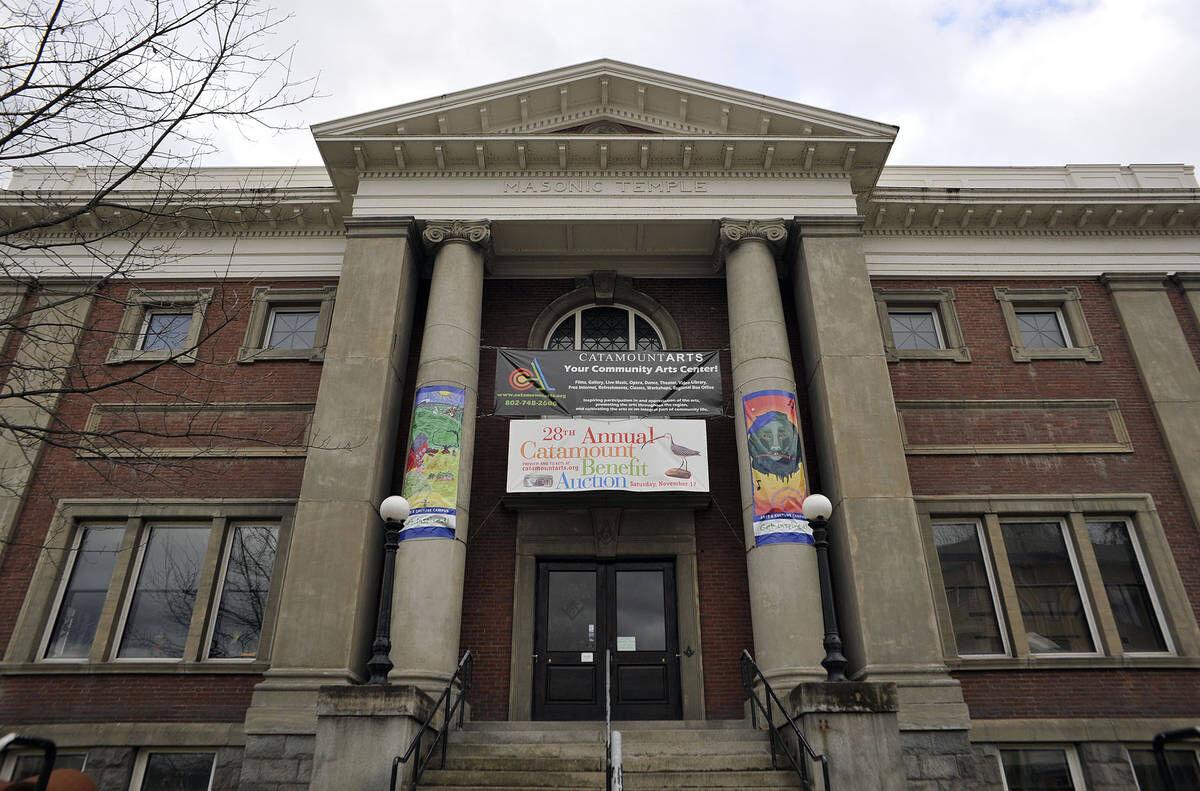 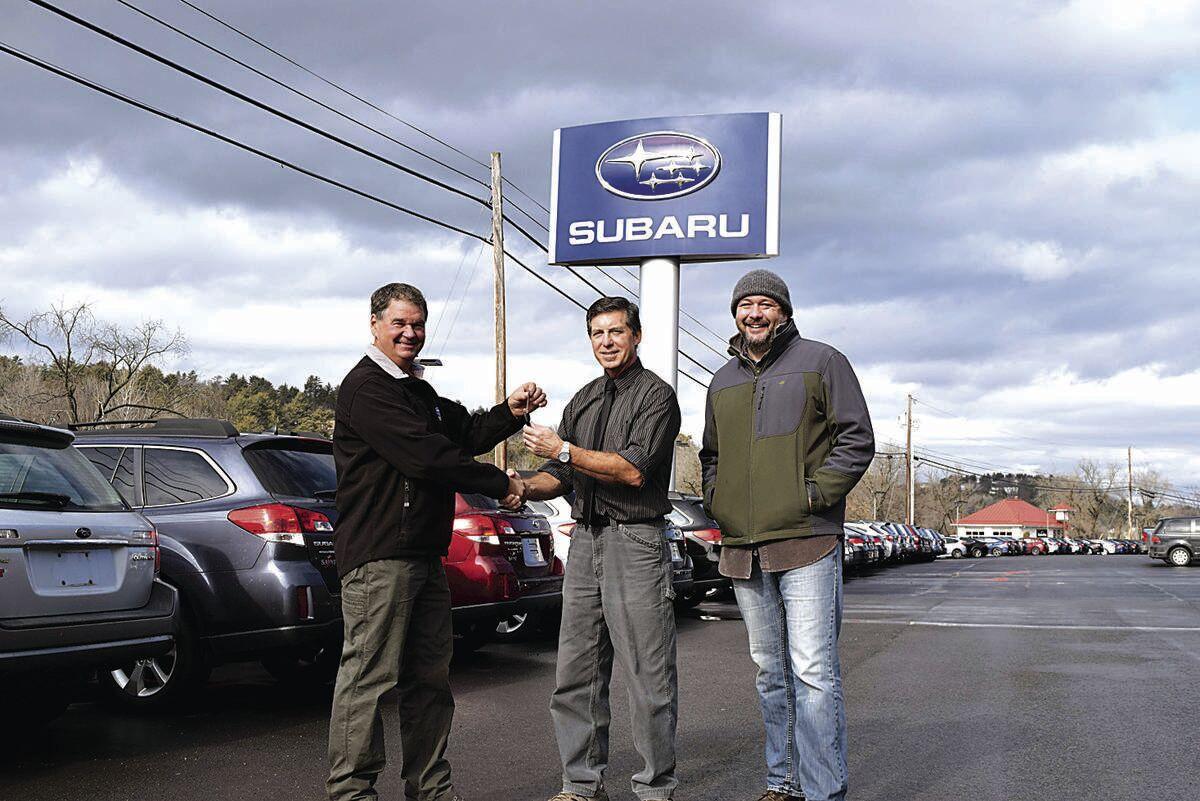 In this file photo from February 2016 are, from left, Mike Loschiavo of St. J Subaru, Dan Wyand, Jody Fried, Executive Director of Catamount Arts. Wyand won the Wheels for the Arts Subaru raffle and then gifted the car to someone else.

In this file photo from April 2017, Nicholas Nutter from Sutton River Electric adjusts a banner on a pole on Memorial Bridge in St. Johnsbury. The banner promoting the presence of Catamount Arts in town is one of many displayed to celebrate the town and its cultural offerings. (Photo by Dana Gray)

In this file photo from February 2016 are, from left, Mike Loschiavo of St. J Subaru, Dan Wyand, Jody Fried, Executive Director of Catamount Arts. Wyand won the Wheels for the Arts Subaru raffle and then gifted the car to someone else.

ST. JOHNSBURY — Catamount Arts commands a loyal following of grateful supporters, but a few of them find ways to give a little more.

All winners of Catamount’s fundraising raffles, Dan and Mary Kay Wyand, Jim and Lorraine Impey and most recently an anonymous couple from Monroe, N.H. have nothing material to show for it. You won’t find raffled Subarus at the Wyands or the Impeys, and the Monroe couple didn’t collect their $10,000. All three couples re-gifted their gifts.

The Impeys told Catamount’s Executive Director Jody Fried to keep the 2019 Subaru Impreza they won on Dec. 31, 2018 and sell the car back to the dealer for cash to support the arts organization. The Monroe couple won the money in Catamount’s recent Summer Solstice Raffle and then donated it all back to Catamount. The Wyands gave the 2015 Subaru they won on Dec. 31, 2014 to someone else in greater need of a vehicle.

“It made a big difference in their lives, and we were just fortunate to be able to give it to someone who needed it more,” said Dan Wyand on Friday. The car is still being used by the person five years later, he said.

Wyand said when he got the call he had won he thought it was a prank. Lorraine Impey said she and Jim were at First Night North the night their names were drawn in the raffle but they were enjoying a Bob Amos show when the drawing took place outside the Catamount Arts building on Eastern Avenue. They learned about their win later that night and winner excited and surprised, Lorraine Impey said.

The couple from Monroe was watching the Summer Solstice raffle drawing via Livestream when their number was drawn. When Fried called to say they’d won, they had already decided they would gift it back to the organization.

It had come up in conversation the day before. They had realized their chances of winning were a little better than usual. In past raffles, they had only purchased a few tickets. This time they bought 30.

Buying extra tickets was their way of contributing more to the sustainability of Catamount, and when they won they jumped at the chance to have the organization keep their winnings.

“Catamount really could use the money,” the couple said, “and we have missed it so much. It’s been kind of helpless for us to have little effect on supporting them and doing anything with this ugly coronavirus. We were just thinking this is something we can do.”

They said they miss supporting Catamount by buying tickets to shows and events and they miss the entertainment Catamount helps provide.

“This is something we really wanted to do as a measure of support for what they do and provide for the community,” they said. “They help make it such an enriching area to live in.”

Fried said his reaction to the Monroe couple’s gift was the same one he had when the Impeys gave their car back to benefit Catamount. “I get all chocked up by these things,” he said.

“I remember being overwhelmed with emotion because as a team we work so hard to do things. Unlike many areas in Vermont, for us in the arts, we piece it together with small pieces. We are not the beneficiary of large angel donors.”

“It’s a testament to the importance of the work our team is doing,” he said. “It’s moments like that that you realize just how important that work is.”

The Impeys are among those who value the impact Catamount has on the community.

“It really didn’t take too much thinking to give it back to Catamount,” Lorraine Impey recalled on Friday. “I think they just provide so much for the area.”

The Impeys are heavily invested in the community and recognize and appreciate the commitment of Catamount.

They own and operate numerous businesses in the area, have renovated several historic properties, and serve on multiple nonprofit boards. The Impeys recognize the struggles non-profits and businesses go through to remain viable in rural Vermont, especially in a pandemic, and have a long history of supporting arts and culture in the region.

Lorraine Impey said Catamount is really being stretched to “think outside the box” these days to offer entertainment in the time of COVID-19.

Fried said times are tough, but the organization is fortunate that the Catamount team enjoys working through problems creatively.

“We’re going to make it through this,” he said. “This is going to highlight for our community the importance of what we all do. People notice when you’re not here. It’s easy to lose sight of something and how much value it has when it’s in abundance.”

This week Catamount Arts drew the winner of its Summer Solstice Raffle. The important fundraiser offers a choice to the golden ticket holder of a tractor, a Harley or $10,000 in cash.

US Sen. Markey, US Rep. Kennedy to meet in televised debate

Lawsuit challenges use of checkpoints miles from the border