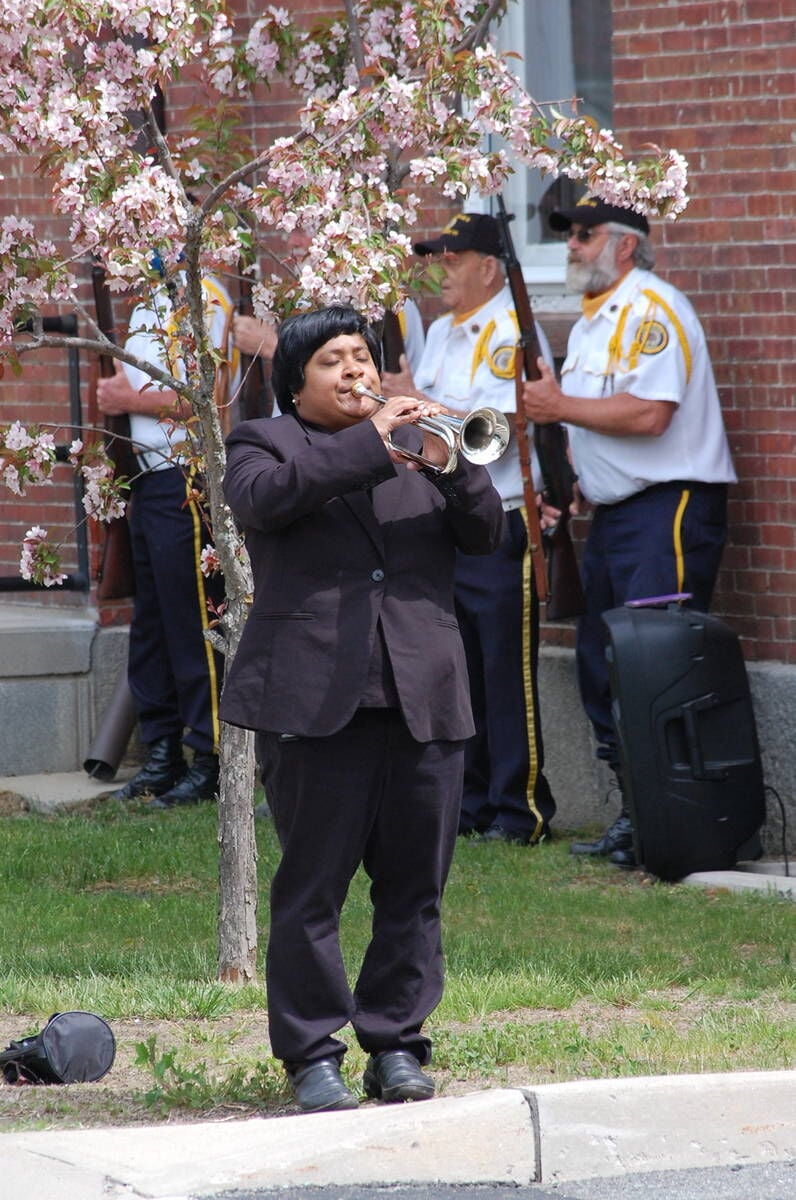 With the firing squad at attention in the background, Debi Smith sounds the mournful tone of Taps at Monday's Memorial Day remembrance in front of the courthouse. (Photo by Stephen Garfield) 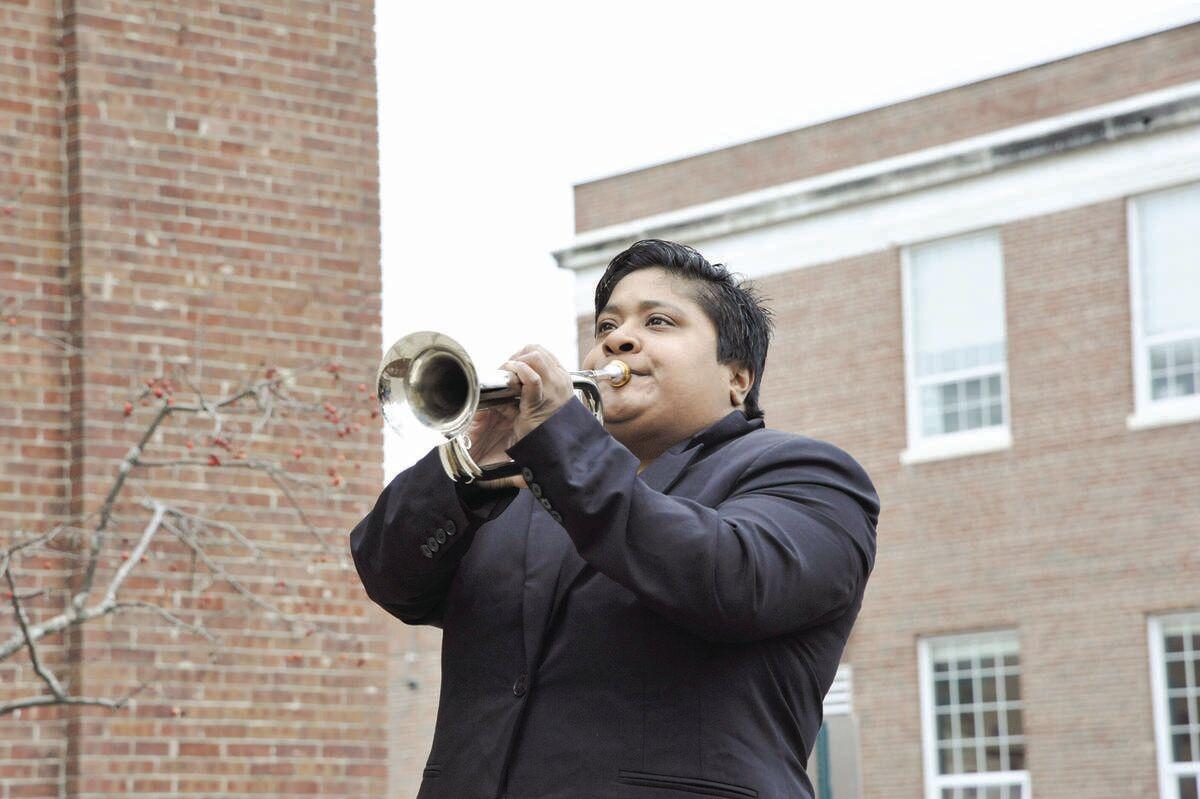 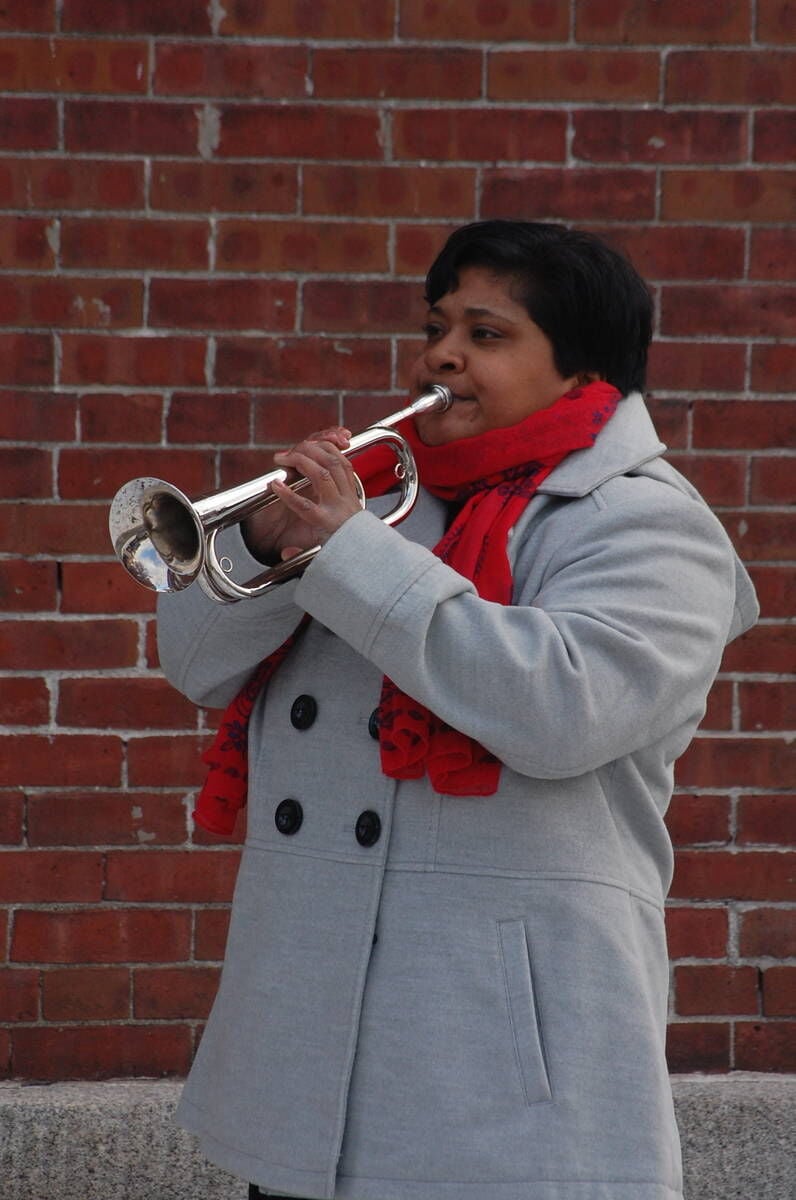 The mournful sound of Taps rings out as played by Debi Smith at Sunday's Veterans Day parade in St. Johnsbury. 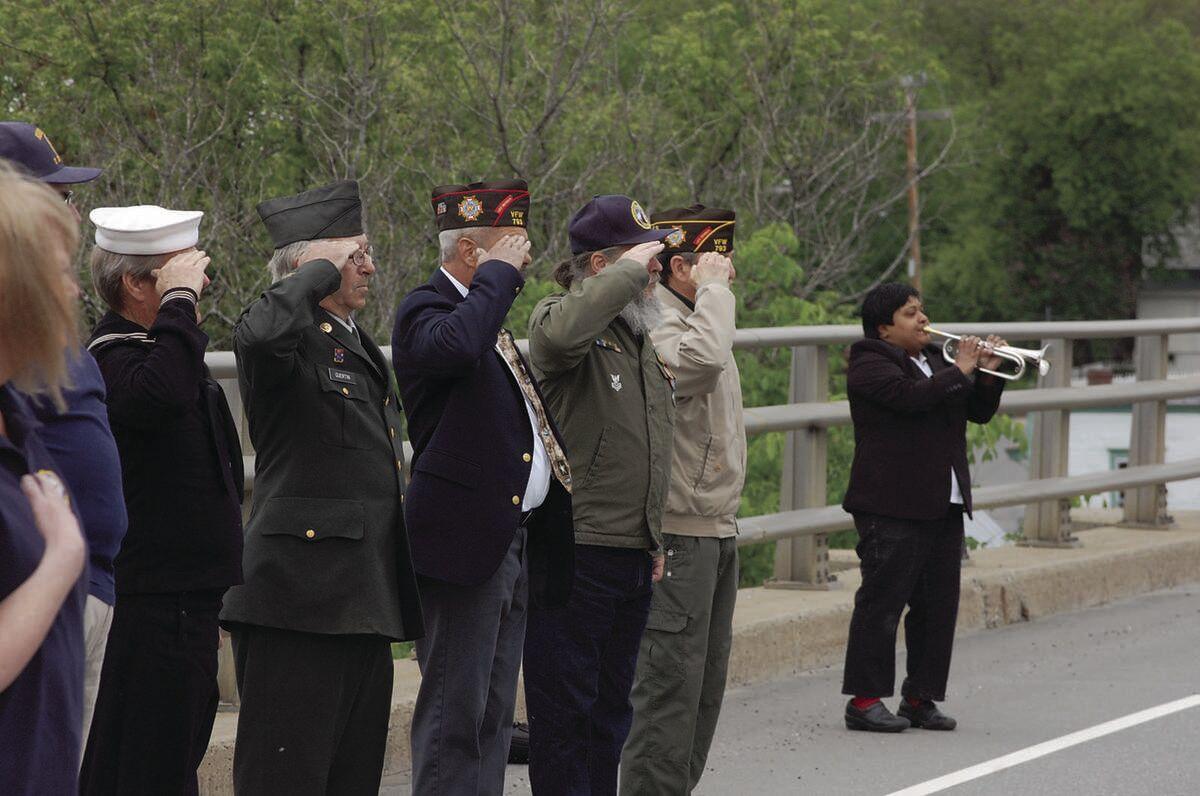 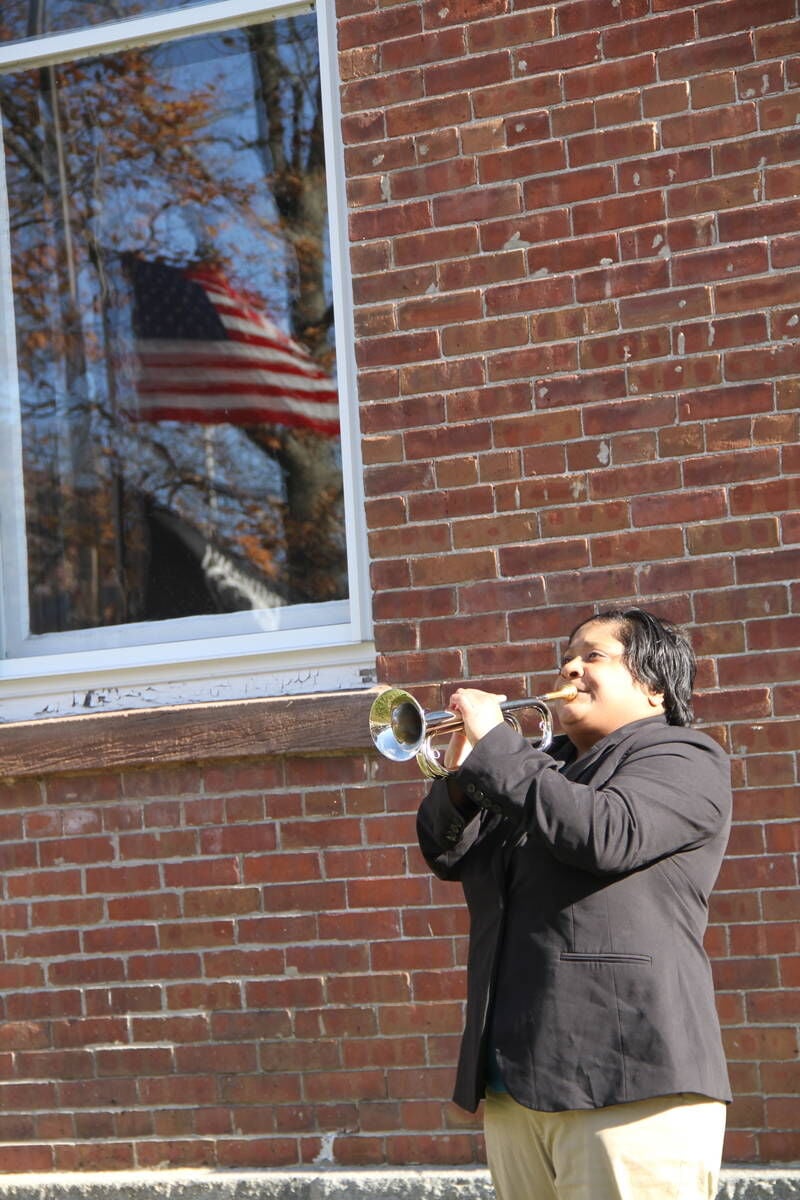 With an American flag reflecting in a window of the courthouse in St. Johnsbury, bugler Debi Smith, of St. Johnsbury, plays taps during a ceremony honoring veterans on Saturday, Nov. 11, 2017. (Photo by Dana Gray) 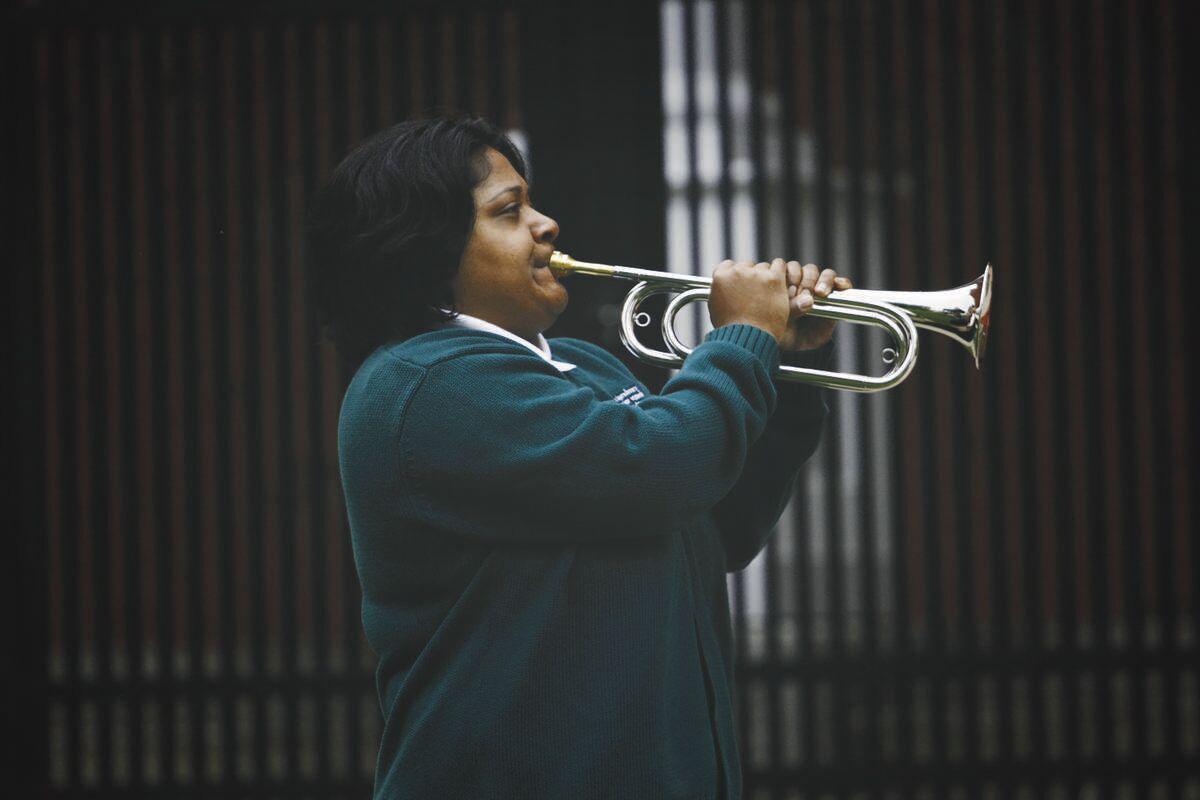 Debi Smith plays Taps in Courthouse Park in St. Johnsbury as part of the community's Memorial Day observance on Monday. In addition to the Courthouse ceremony, Smith was called upon to sound the bugle call at the Veterans Memorial Bridge wreath ceremony and at a flag ceremony at American Legion Post 58. (Photo by Dana Gray)

With the firing squad at attention in the background, Debi Smith sounds the mournful tone of Taps at Monday's Memorial Day remembrance in front of the courthouse. (Photo by Stephen Garfield)

The mournful sound of Taps rings out as played by Debi Smith at Sunday's Veterans Day parade in St. Johnsbury.

With an American flag reflecting in a window of the courthouse in St. Johnsbury, bugler Debi Smith, of St. Johnsbury, plays taps during a ceremony honoring veterans on Saturday, Nov. 11, 2017. (Photo by Dana Gray)

Debi Smith plays Taps in Courthouse Park in St. Johnsbury as part of the community's Memorial Day observance on Monday. In addition to the Courthouse ceremony, Smith was called upon to sound the bugle call at the Veterans Memorial Bridge wreath ceremony and at a flag ceremony at American Legion Post 58. (Photo by Dana Gray)

ST. JOHNSBURY — Each Memorial Day and Veterans Day all ears are on the bugle-playing of Debi Smith.

The 34-year-old St. Johnsbury resident has been playing “Taps” at commemorative ceremonies held in town by the VFW and American Legion for the better part of 10 years.

In part taken from a French bugle call, “Taps” was rearranged and used during the Civil War as a call for lights out. In the late 1800s, the Army formally adopted the tune for use at military funerals and memorial services. The sound of a bugler playing “Taps” is a call to remember those who gave their lives in the service of the United States.

The reverence shown during the playing of “Taps” includes salutes among military Veterans and silence and stillness by all within earshot.

As someone who began playing the trumpet when she was 9, Smith said “Taps” is not a particularly challenging piece of music to play, but the moments in which it’s played is of significant importance.

“I grade it as easy piece to play with only three notes, but those three notes are the hardest notes of your life that you’ll ever play,” she said.

Smith said she knows all attention is on the sounds from the bugler when “Taps” is played, and she is keenly aware of the reverence required by both player and listener, but years of playing before community members and Veterans has made her poised, comfortable and competent.

The first time she picked up a trumpet was when she was 9. Four years later she was playing “Taps” for the first time as a Barnet School student. She started playing with the St. Johnsbury Band when she was still in high school and has been part of the band for many years since. She hasn’t been an active member of the band recently because her training and meetings as a volunteer firefighter in Peacham present a scheduling conflict.

Smith, who did not have instrument-playing family members, credits two women with instilling in her an appreciation of music and the skills she gained to play an instrument. The first was Dale Camara, her first music teacher in Peacham where Smith grew up. They remained friends through the years, and when Camara died about 10 years ago, Smith spoke at her memorial service.

“I will always hold her with high praise for introducing me to the world of music,” said Smith.

The next great influence was when she was in middle school in Barnet, which is the place Camara encouraged Smith to attend because of its music program and teacher, Eileen Rosetti. Smith’s friendship with Rosetti continues to this day.

“As soon as we met we just clicked because she has an impeccable sense of humor,” Smith said.

She recalls playing “Taps” for the first time on Memorial Day as an eighth grader.

“I would go out to the local cemeteries and play and even at 13 years old I was very moved by it, and it always stuck with me,” she said.

She was 15 when the terrorist attacks struck U.S. soil on Sept. 11, 2001. The military conflicts that followed with the War on Terror caused Smith to have greater appreciation for the sacrifices of service men and women.

She said she is grateful that her music skills have put her in a position to help honor the people who have served.

“I love it. It’s definitely what I was meant to do,” she said.

The second year paraeducator in Lyndon will be available to play this Veterans Day on Wednesday. She’ll play “Taps” on the Veterans Memorial Bridge for the 9 a.m. ceremony and at the Courthouse Park for the ceremony at 10:30 a.m.

She couldn’t say with certainty that she’s played at every Memorial Day and Veterans Day in the last 10 years, but she said it’s probably close to all of them. “I’ve done my best to play at everyone of them,” she said.

“The importance of her playing actually live rather than a recording is a huge part of what makes it special,” he said. “Her willingness to do it and her professionalism in doing it is appreciated.”

Bigelow welcomed the public to witness the ceremonies in St. Johnsbury being mindful of face coverings and proper distancing. Members of the American Legion will also take part in the formal ceremonies. There will be no parade this year because of COVID considerations. Also, the VFW will not be able to welcome veterans to their location on Eastern Avenue for the traditional post-event luncheon.

The Elks Lodge in St. Johnsbury is holding a meal at their Western Avenue home where Veterans can eat for free at 5 p.m. Brian Harbaugh, bar manager at the Elks Club, said they have a function hall large enough to seat people for a meal. He said meals are also available for delivery for those veterans who don’t want to go to the club. Call 748-3785 to request a meal.

“It’s part of our Elks duty,” said Harbaugh. “We proclaim that we’re never going to leave any veteran behind. We feel as though we can give back to those who gave to us.”

The pandemic is limiting gatherings this Veterans Day, but some area communities will mark the holiday to some extent.

In Gardner Park in Newport at 10:30 a.m. the VFW will hold a short ceremony.

The VFW in Lyndonville will also hold a ceremony in Memorial Park at 11 a.m.

Lunenburg will host a Veterans Day observance on Wednesday, Nov. 11, at 10 a.m. on Lunenburg Common. A locally-made memorial wreath will be placed in front of the Lunenburg Veterans Memorial. A reflection will be shared by a Lunenburg veteran. A benediction will be offered, a firearms salute given and “Taps” will be played.