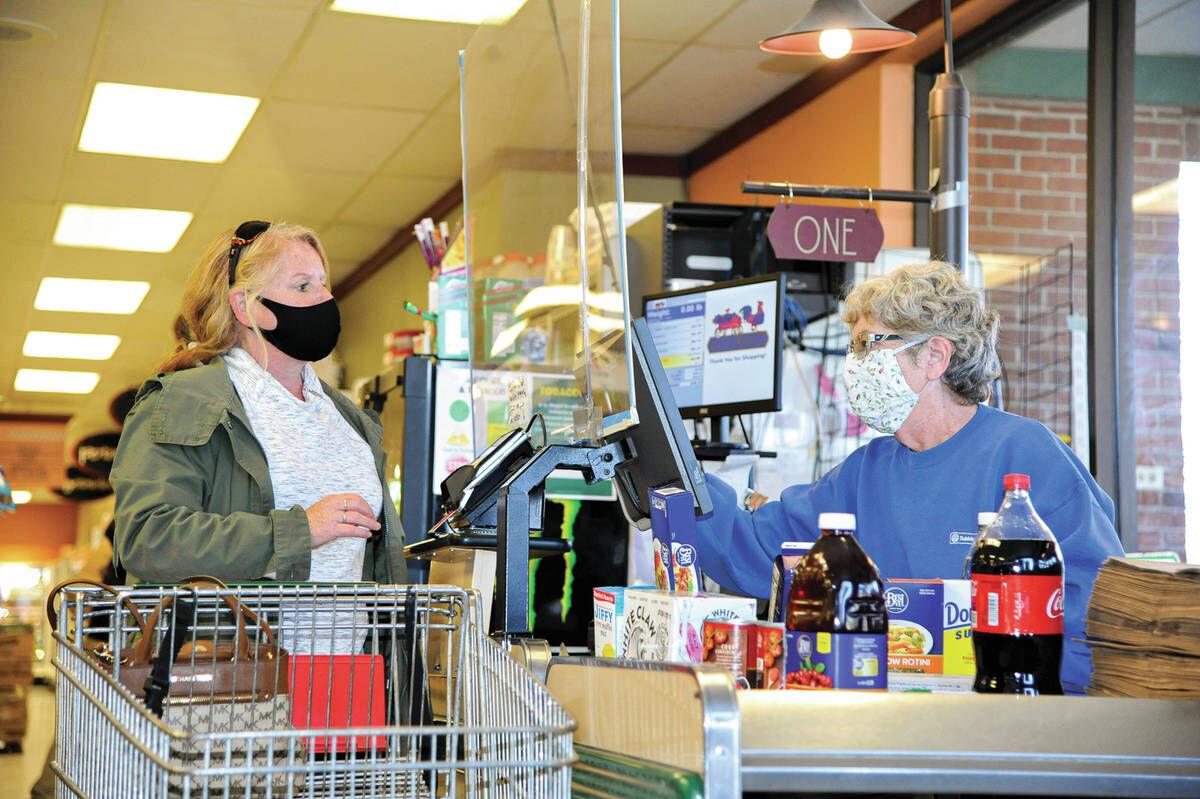 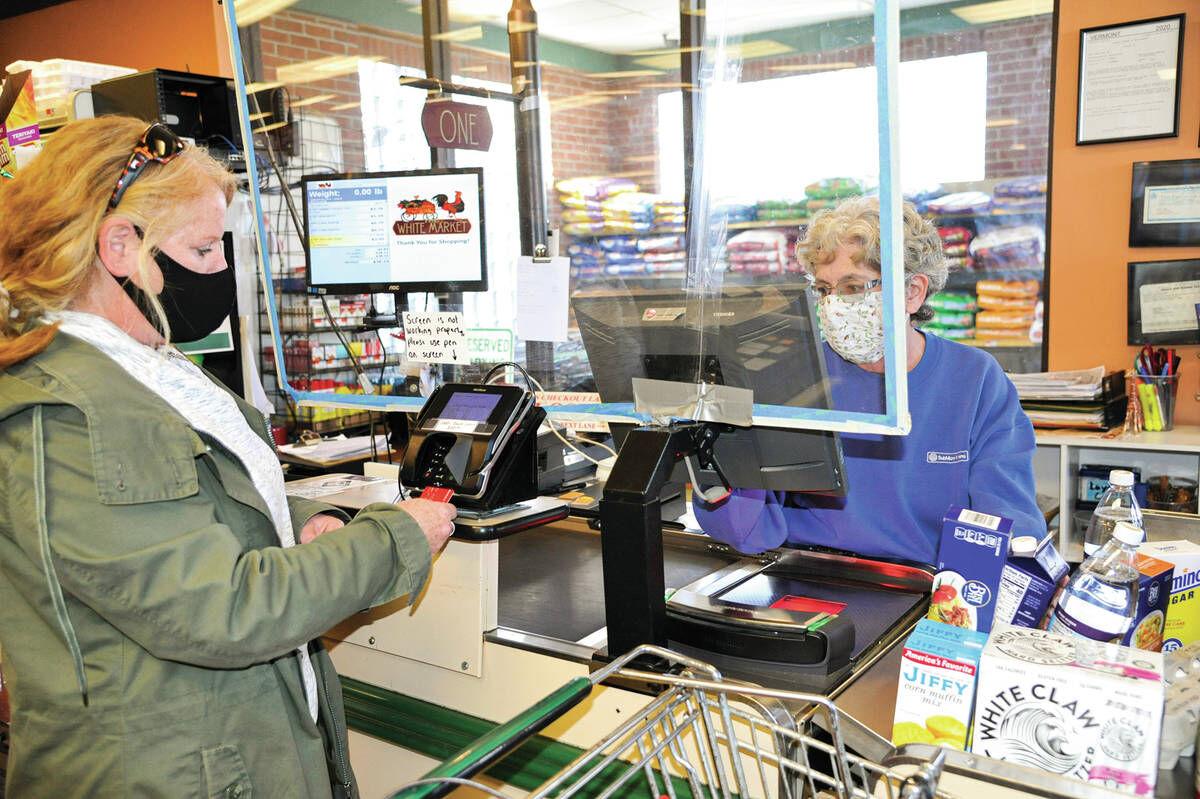 Two million nickels, a million dimes or 250,000 quarters – no matter how you convert the $100,000 raised through The White Market stores’ Coins for Community, it’s been an impressive first year for the fundraising program.

This month marks the one-year anniversary of the program at the Lyndonville and St. Johnsbury White Market stores where customers are given the chance to round-up the cost of their purchases to the nearest whole dollar. The added cents on every transaction, where a customer rounds-up, go to a designated community organization. On Thursday, the $100,000-mark was reached. Multiple local organizations have benefited from the initiative.

“There are so many organizations that do so much and are volunteer-run in our communities that are the reasons we have a good quality of life around here,” White Market Co-owner Sarah Lafferty said. “Coins for Community is a way with very little effort people can see they actually make a difference for these organizations and they can take some level of ownership and see that they have the ability to help.”

Lafferty is active in the community in several ways, including serving as president of the Lyndon Area Chamber of Commerce and as president of Powers Park, but the successful partnership between White Market customer and area non-profit organization was not her idea.

Lafferty said Wendy Beattie, president of Lyndon Outing Club, brought the idea to her as a suggestion from someone on the Outing Club’s board.

“The conversation we had was just that our non-profits need more attention as well as funds,” said Lafferty. “Fundraising is really hard; everybody is just stretched so thin. We have a lot of organizations that have these huge overheads that nobody thinks about. It’s a lot just to maintain those let alone build on them.”

Lafferty said she liked the idea, not only for the money raised, but also as a way for people to have a greater awareness and appreciation for the organizations in the area.

“This is a great way to encourage the community to own their local organizations,” she said. “I think we need to hold ourselves accountable and take ownership especially with these non-profits.”

The Outing Club was the first recipient of funds raised through the Coins for the Community program. Through two weeks last November and last December, customers were asked if they would like to round-up to help the Outing Club. Enough people said yes to generate $10,165.34.

Lafferty said it took a little time for customers and cashiers to get used to the discussion about rounding-up.

“When we first started there were customers who did not like this,” she said. “If you want to say no it can be uncomfortable but we’re not judging.”

She said some of the cashiers thought it sounded like they were begging when they invited people to round-up. She said she reminded them that they are asking not for themselves but on behalf of a worthy local organization.

The success of the first round-up initiative for the Outing Club, in terms of the support raised and determining a clean and clear process of accounting, convinced Lafferty that the Coins for Community program was worth continuing. By the end of last December, Lafferty had identified all the organizations in the area that would be supported each month of 2020.

The Fenton Chester Ice Arena was helped in January with $8,466.63, followed by the Kingdom Animal Shelter in February, which received the most money among all the local groups on the Coins for the Community calendar, gaining $11,858.63.

“The community and patrons of White Market were so generous to us,” said Helen Morrison, president of the shelter’s board. “Their coins program is just stunning. What is glorious and brilliant about it is that one hardly notices when one ‘rounds up’ and yet it adds up and becomes a significant gift to a local organization that helps the community.”

“It was of course very wonderful, especially during a pandemic,” said Cindy Karasinski, who is retiring as director of Cobleigh Library. She said the library was unable to do typical fundraising this year, and Coins support was a significant help.

The bulk of the money went to funding the Bookmobile, which only functions with financial support through donations and grants.

“It was just perfect for what we needed and a welcome relief at the same time,” Karasinski said.

The Athenaeum, which reopened to the public on June 15 after closure due to COVID, used the money given to purchase supplies designed to protect against virus transmission and exposure.

“We are spending a ton of money on keeping this place clean and sanitized,” said Bob Joly, Athenaeum director.

He called the influx of money from the Coins fundraiser “a huge shot in the arm.” He expressed gratitude to the White Market customers who rounded up their bill to support the Athenaeum and praised Lafferty and her employees for taking on extra work to provide the program.

“They can’t be applauded enough for doing this job,” he said. “It’s genuine goodwill.”

The year anniversary for the Coins program wraps up this month, coming full circle with funds being directed again to the Outing Club. The year will end with support for the Caledonia County Special Olympics program.

Lafferty said the idea of the program when it was conceived a year ago was to give local groups extra funds that allow them to go beyond maintaining, and address a need that normal funding streams haven’t met, but then the pandemic came.

The money instead became a lifeline for some of the groups who suffered most because of the outbreak of COVID-19 and the restrictions related to containing it.

“They’ve said ‘I don’t know how we would have made it through the year without this because we didn’t have any other revenue coming in,’” said Lafferty.

The search is on for next year’s Coins recipients, and this time Lafferty is looking for guidance. She’s opening up the selection process through online voting. A list of potential recipients can be found at The White Market website or on its Facebook page. Voters are asked to choose up to 12 from the available list. Voting ends at the end of the month, and Lafferty will announce the picks for next year’s Coins program organizations on Dec. 2.

Lafferty encourages people to go online and vote to support the work of local organizations.

“I hope this program reminds people that there are things we enjoy as a community that we only get to have if we take care of them and appreciate them and support them,” said Lafferty.