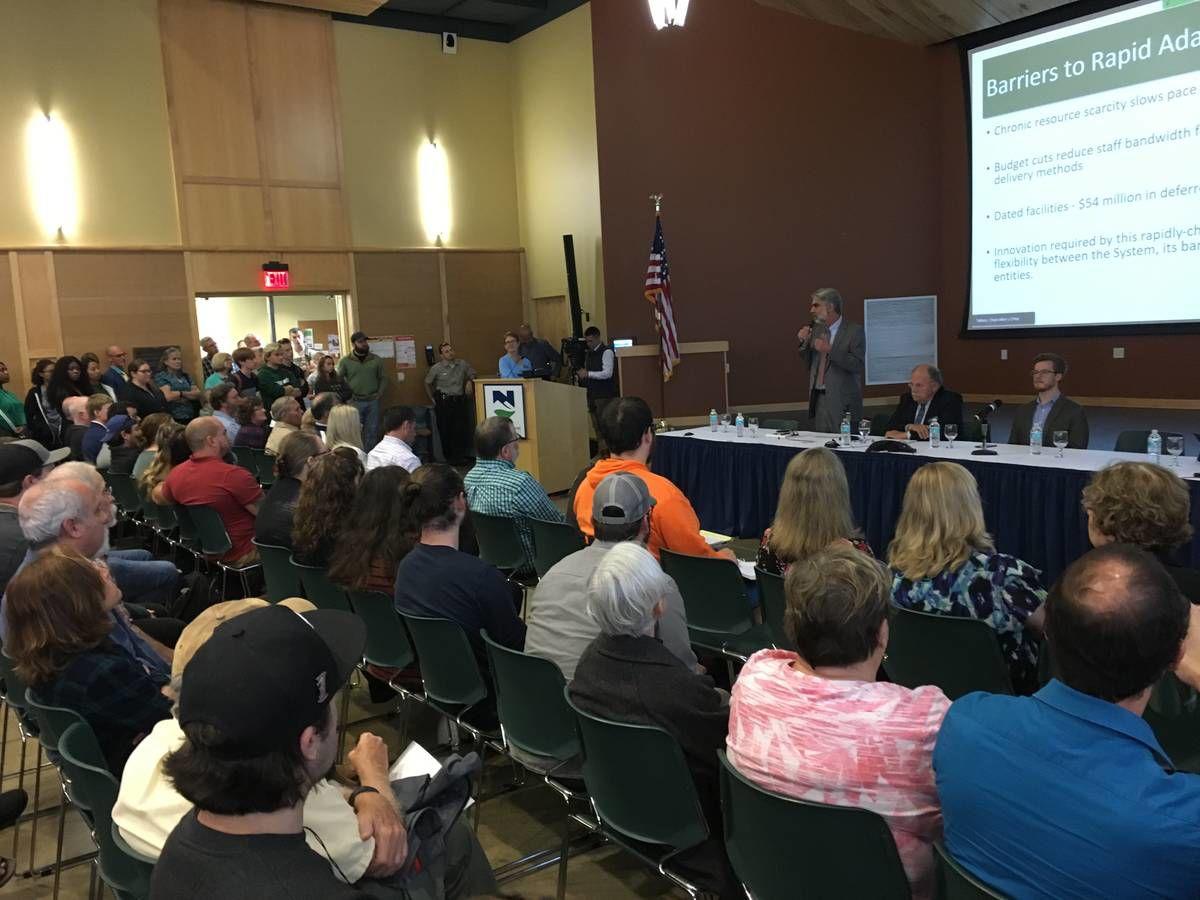 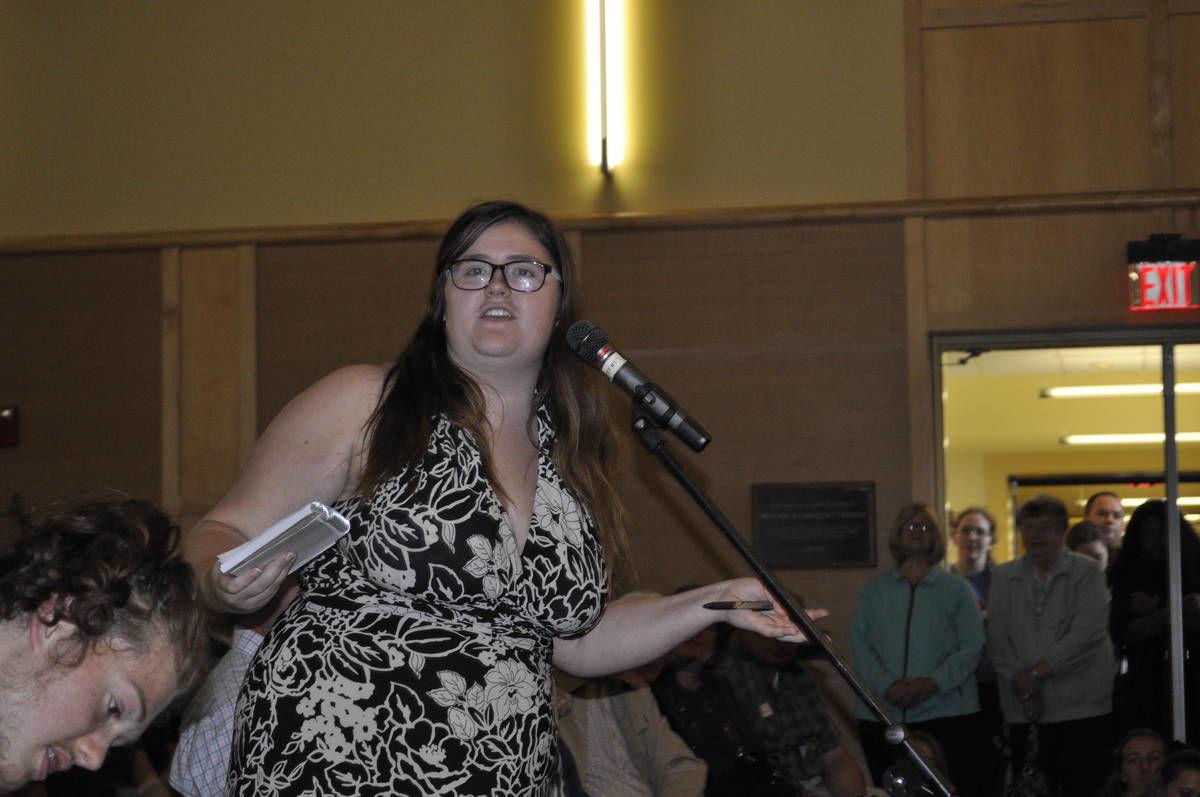 NVU-Lyndon Student Government Association President Kate Henriques speaks at a meeting with the VSC Chancellor and Board on Thursday. (Photo by Amy Ash Nixon) 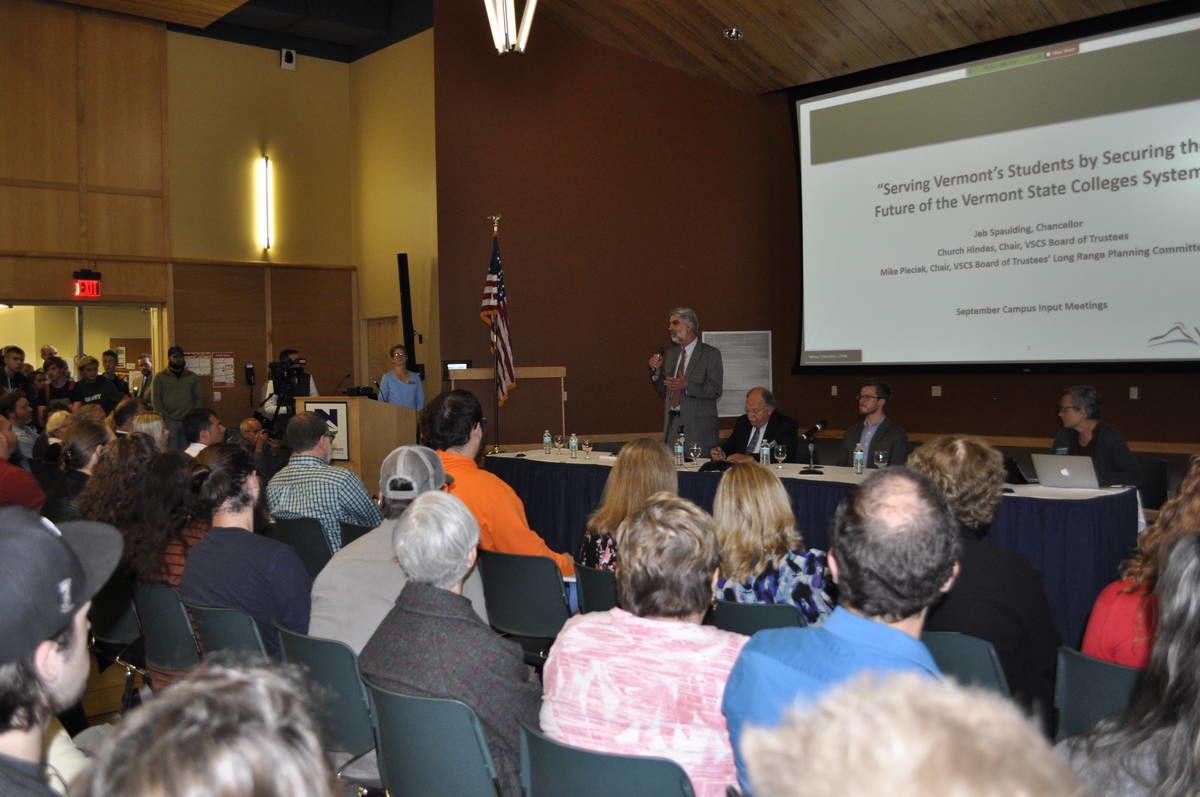 A packed meeting at NVU-Lyndon with VSC Chancellor Jeb Spaulding and members of the VSC Board on Thursday. (Photo by Amy Ash Nixon) 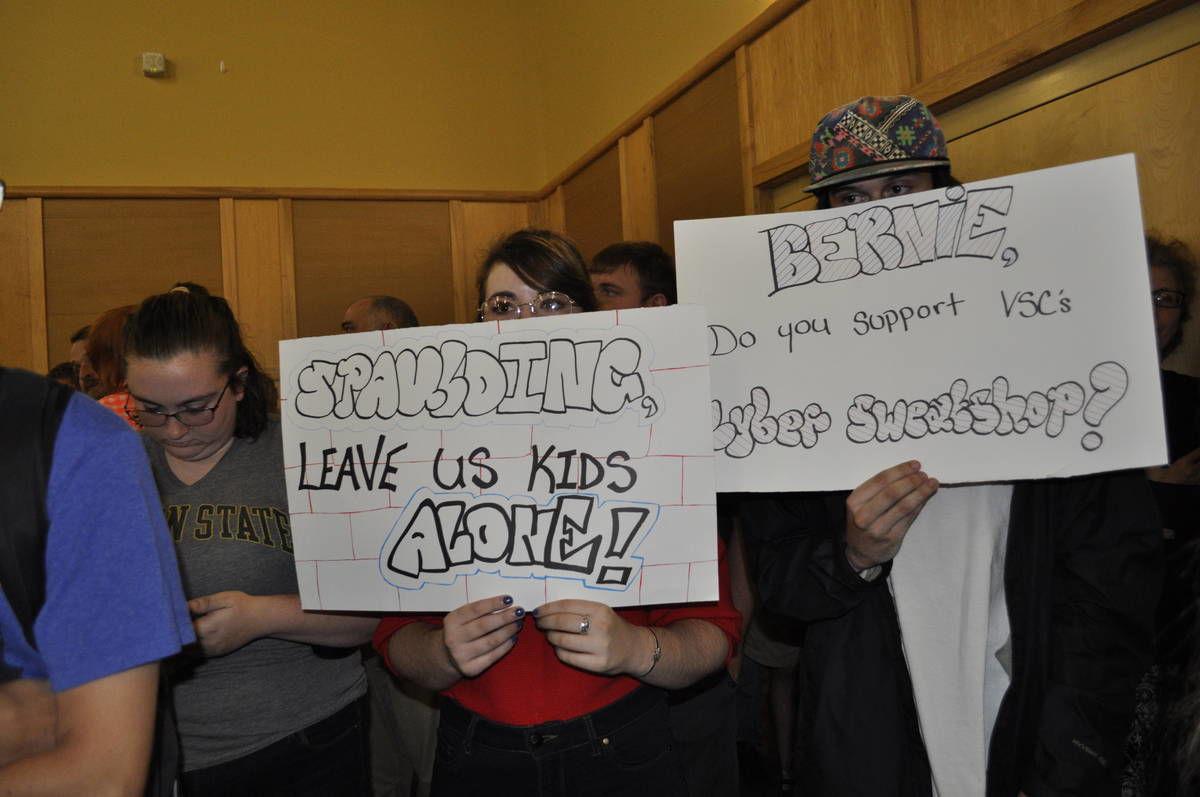 NVU-Lyndon students hold signs at a meeting with the VSC Chancellor and Board on Thursday. (Photo by Amy Ash Nixon) 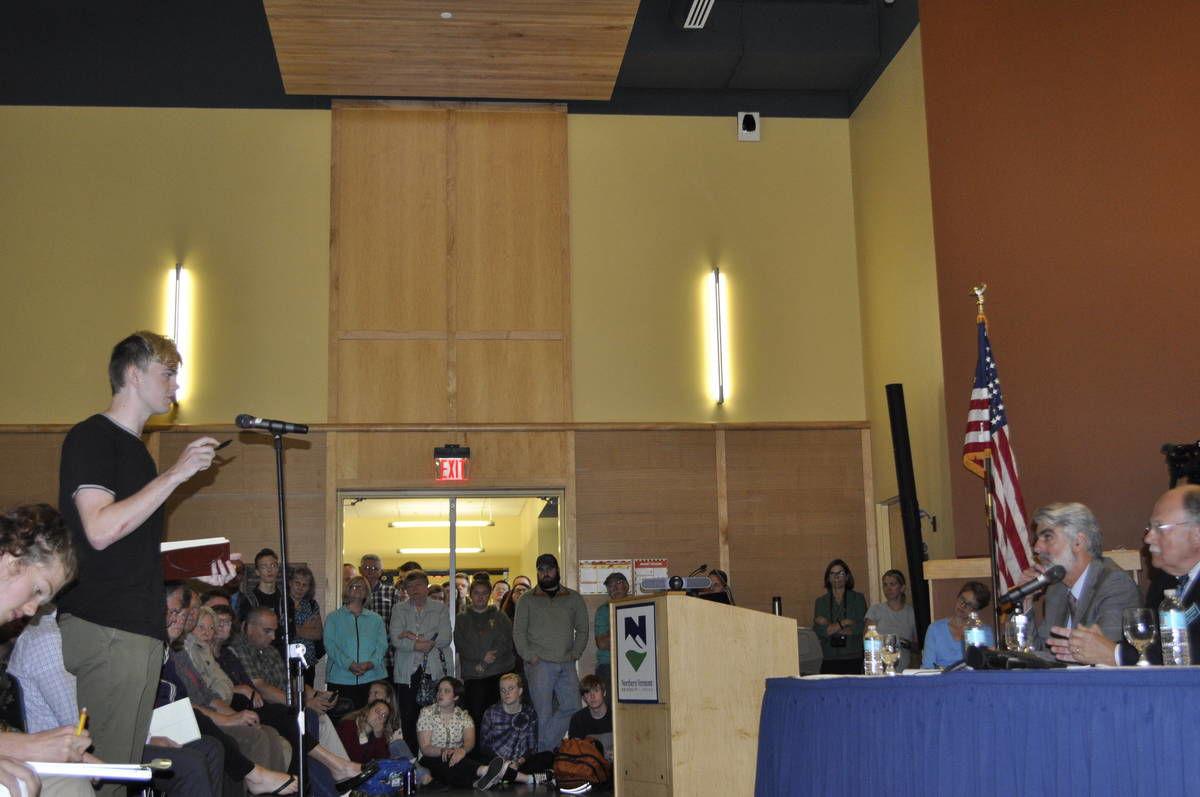 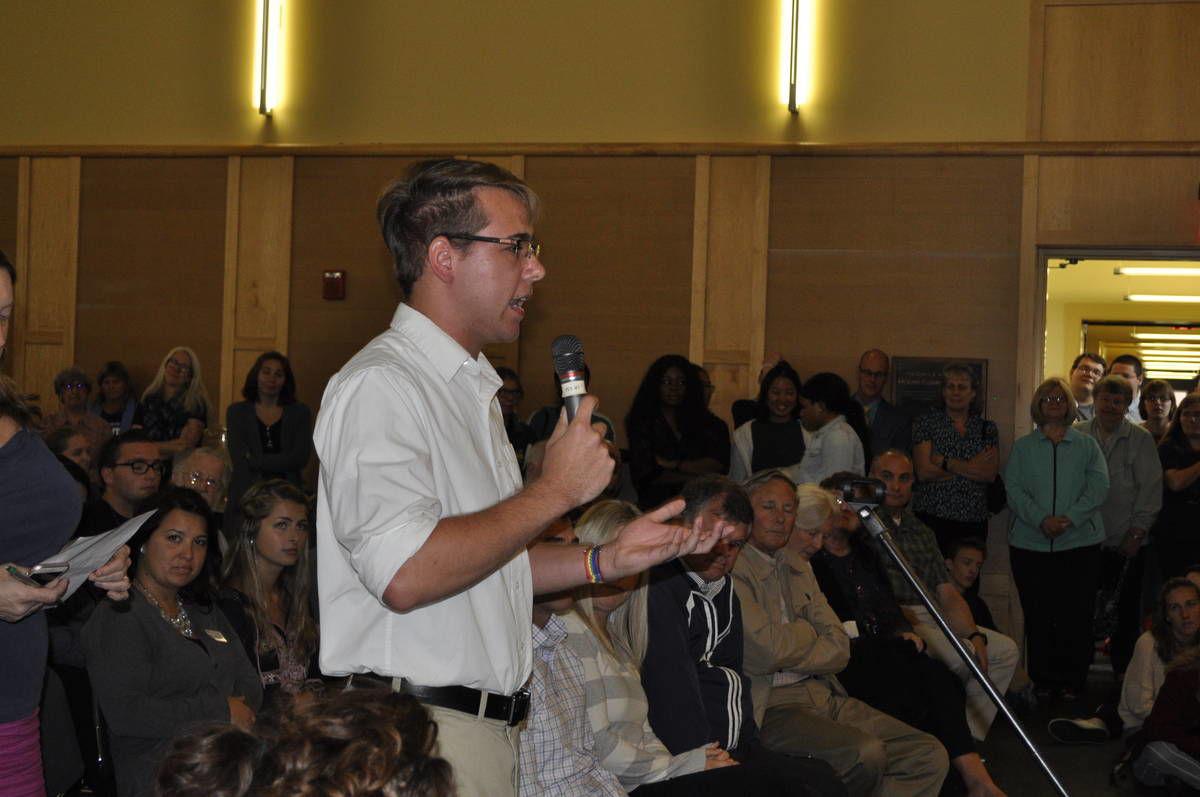 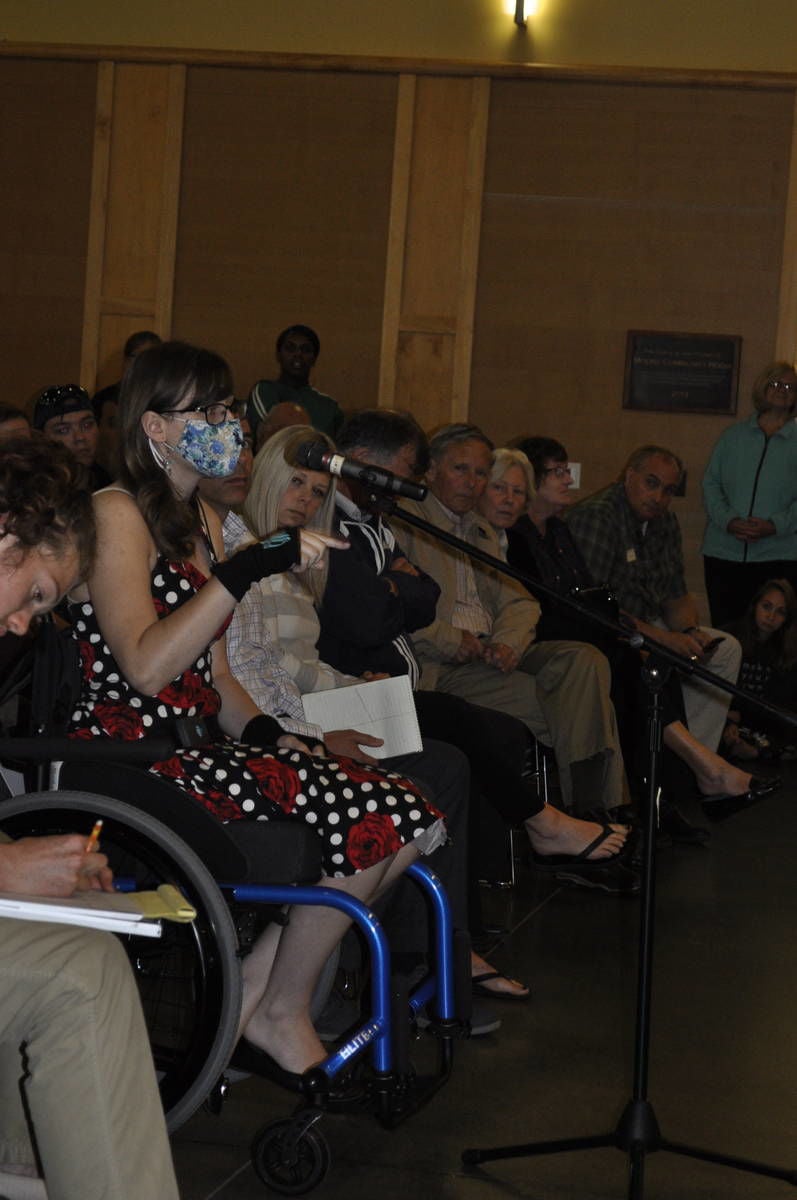 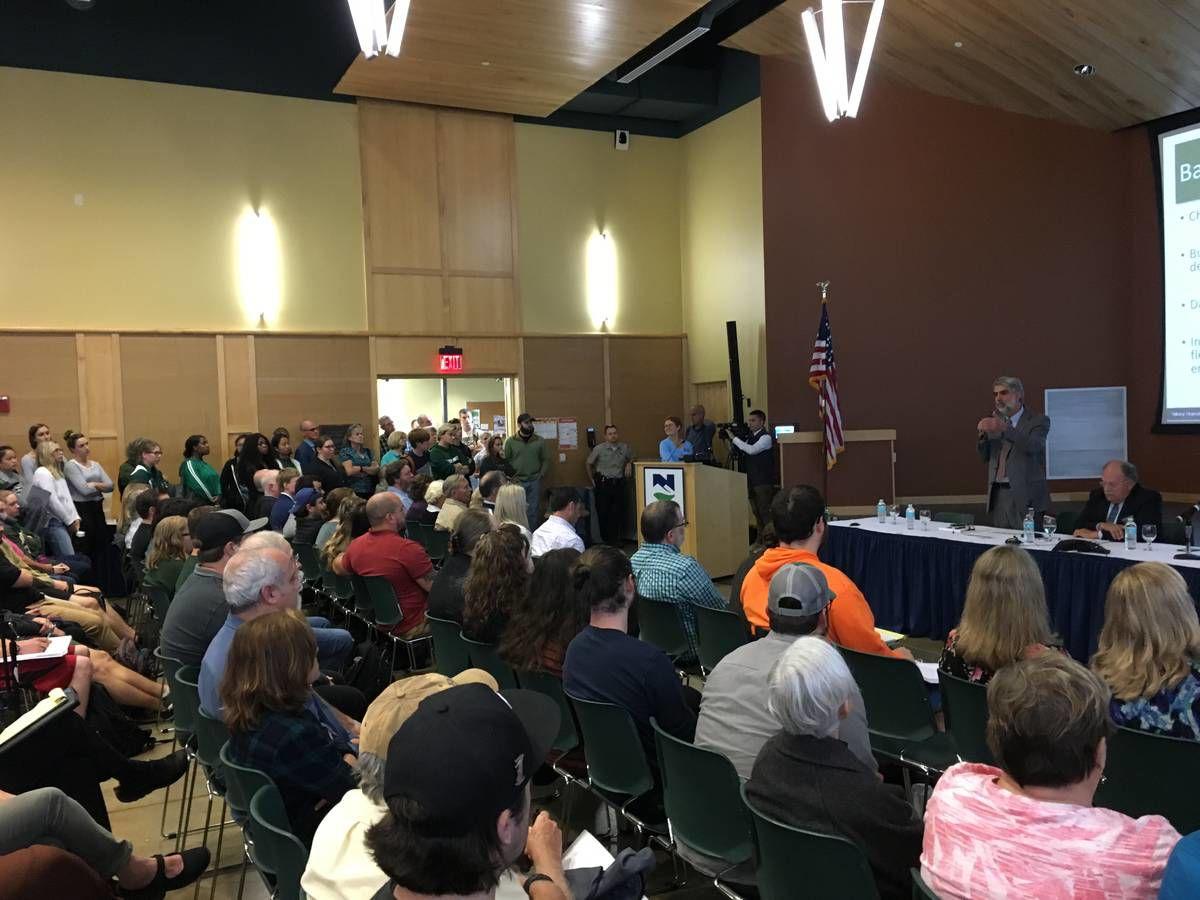 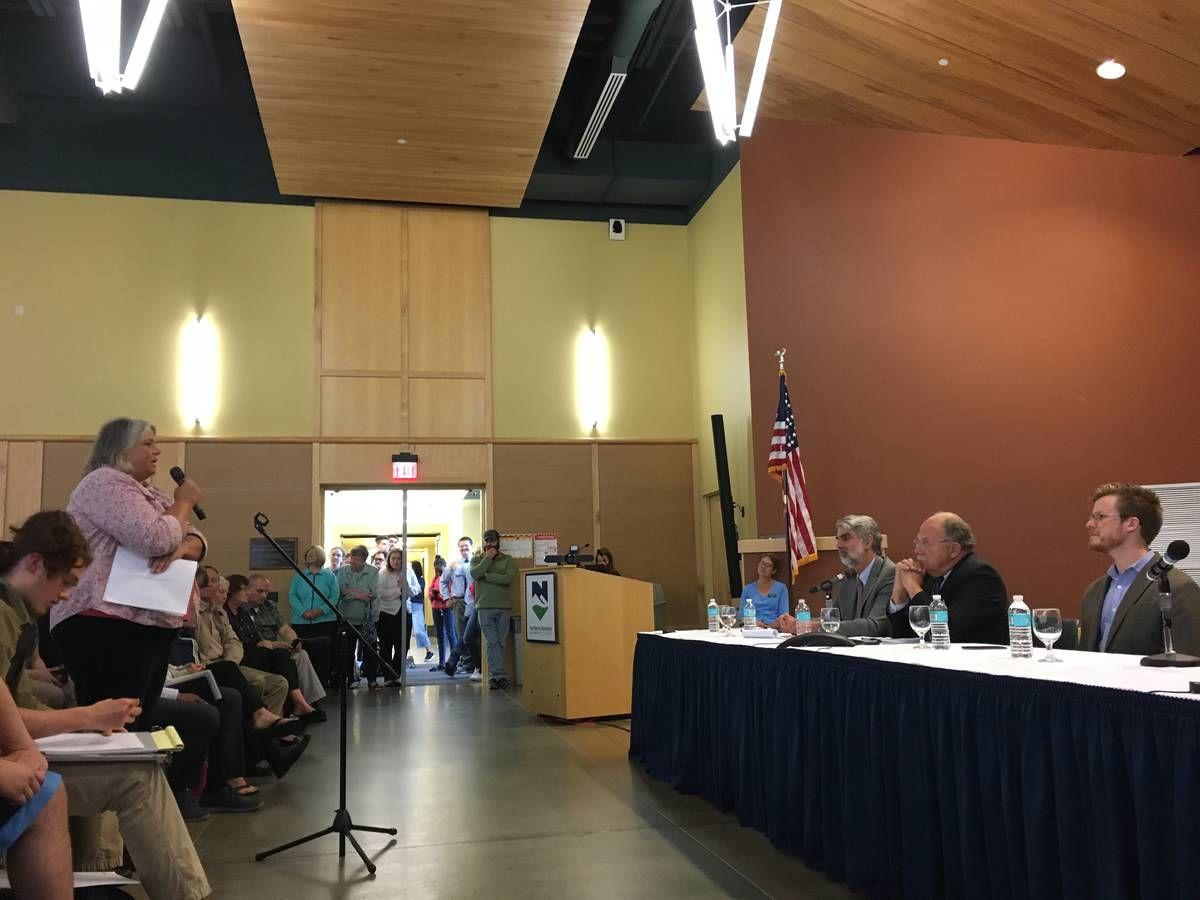 NVU-Lyndon Student Government Association President Kate Henriques speaks at a meeting with the VSC Chancellor and Board on Thursday. (Photo by Amy Ash Nixon)

A packed meeting at NVU-Lyndon with VSC Chancellor Jeb Spaulding and members of the VSC Board on Thursday. (Photo by Amy Ash Nixon)

NVU-Lyndon students hold signs at a meeting with the VSC Chancellor and Board on Thursday. (Photo by Amy Ash Nixon)

An impassioned overflow crowd at Northern Vermont University in Lyndon expressed fears, concerns and suggestions to Vermont State Colleges leadership on Thursday as the system tries to figure out what to do about declining enrollment, low state support, competition and other challenges across the schools.

Leadership has been holding meetings at campuses around the state to gather input on what steps to take to thrive.

Among the challenges, the number of seniors in high schools in Vermont is down 25% and the college-bound population is projected to go down another 15% in the Northeast over five years starting in seven years, said Vermont State Colleges Chancellor Jeb Spaulding. Births in Vermont have also dropped, he said.

State financial support for higher education was also about 50% in the 1980s and now it’s down to about 17%, putting Vermont and New Hampshire at the bottom of the list nationally for their support for public colleges and universities while competing institutions are discounting their tuitions, he said.

About 200 ideas are before the board of trustees ranging from three-year degree options to consolidating or closing institutions and streamlining administration; no decisions have been made, he said.

Students in Lyndon demanded that the meeting be extended to allow everyone who wanted to speak to get a chance to and cheered and clapped after each address.

Student Curtis Base said he had heard rumors about the institution being shut down and solely becoming Northern Vermont University Online, which he said he opposed.

“There are many students here who need one on-one learning or hands-on learning and I should know because I’m one of those students,” he said.

Geology professor Alison Lathrop also pleaded with leadership “not to depend too much on online education” saying there are disciplines where online learning is “utterly inappropriate.” She also was critical of the legislature for the low support of public higher education.

“Relying on 85% student contribution is shameful,” she said.

Spaulding told the crowd as far as he knew there is no proposal to eliminate a campus or be an all NVU Online campus.

“NVU Online is one way for NVU to expand its market in a time of declining traditional student,” he said. “And it’s not for all students but for many students, particularly working students and adults it’s easier for them to access post-secondary education online.”

The VSC Board was called on to be more transparent and open lines of communication with the community in order for accurate information to help steer the process. One student said she awakes to near daily panic on social media that her college is going to close.

A number of students said they do not trust what is being said by the VSC administration.

Professor Pat Shine urged that ideas being circulated among the VSC Board for changes be made public as soon as possible, and said closing NVU-Lyndon “would be an incredibly stupid decision,” returning to her seat to applause.

Other professors spoke of the need for in-person learning for many students with learning challenges.

Student Mallory Pugh, who uses a wheelchair, wore a medical mask and said she has illnesses that confound her doctors, spoke about being accepted at Lyndon and pleaded with the board not to close her school.

“I’ve made more friends here than I’ve ever made,” said Pugh. “I came here to learn, to be accepted. I found friends. I don’t want to lose this place. … This is my home now, I can’t leave.”

More than once the Chancellor and Board were urged to make tuition costs their top priority.

Students and faculty spoke about program cuts or relocations to Johnson, which Lyndon merged with on July 1, 2018, and majors being canceled altogether. Beloved professors have left, and students have sometimes learned their major is no longer offered and been reassigned a new major via email.

Barbara Morrow, a community member, expressed how hard it was to even find out about the meeting. “I would like to push for more transparency.”

She said she was troubled that the VSC Board did not include a member from either Caledonia or Orleans counties.

“Be more transparent, reach out to the local community,” she stressed.

Alum and former employee Keith Chamberlin urged the college do more to help re-train older workers who have “run out of runway in our careers,” and require lifelong learning opportunities to restart careers in their 50s and 60s. The NVU-Lyndon campus is a critical economic piece of the Northeast Kingdom. He stressed closing it “would be devastating to a lot of our students.”

Ben Johnson, a sophomore, said, “The amount of turnout and passion we see in this room today is expressive of how much people care.”

Physics professor Dr. Ben Luce turned to face the audience and then back to the VSC Board, saying, “Welcome to the NVU- Lyndon spirit – it’s a strong spirit.”

“These reforms have to be done through thousands of carefully executed decisions, not big, dramatic actions,” warned Luce.

The meeting was supposed to conclude at 1 p.m., but was still going strong at 2:30 p.m.

When Hindes, the Board chairman said at one point that if comments weren’t more brief that “We’ll be here for an hour,” a chorus of people said that was fine.

A student veteran spoke to how challenging it is for veterans to come back to school, urging they be factored into decisions.

Sylvia Plumb, director of marketing and communications, said NVU is 14 months into the unification and said, “We are just barely getting in the game … it’s competitive out there.”

She said NVU is Johnson, Lyndon and NVU Online, and diversifying is critical to move forward – she said the university is working to “come up with new certificates, what the labor force desires. NVU Online needs to be there.”

“NVU is the innovation you are seeking in our system,” Plumb said.

Student Government Association President Kate Henriques urged the board to sit in on a class. “I came here for ‘turn your passion into a profession,’” she said. “Getting hands-on experience … why is that changing? It shouldn’t. Lyndon is known for their hands-on programs, why is that being taken away?” she asked to applause.

Local business owner and LSC alum Kim Crady-Smith, who helped to circulate a letter this week that helped drive up the turnout at Thursday’s meeting, said, “I don’t think that NVU-Lyndon has really been given a chance to bloom as a university and I’m very concerned about the online school. The programs here have been gutted because of online classes.”

Vanessa Symonick, a student in the Atmospheric Sciences Department, said she has made many important, positive connections and grown in her short time at NVU-Lyndon. “Lyndon has meant a lot to me these last couple of years, so thank you.”

Local business owner and LSC alum Patty Emery told the VSC Board that the community is behind NVU-Lyndon. “If you had to close a college … I sure hope it won’t be this one, it would devastate the community.”

Eric Berry, a 1990 LSC grad, local business owner and athletic director at Lyndon Institute, was at the meeting and said after, “I find it completely irresponsible that they have zero representation on the VSC board, or any special commission concerning closing schools in which Lyndon doesn’t have a representative on either.”

“I find it further reprehensible that a current trustee entertained the thought of closing Lyndon, and letting that information get out to the public without transparency,” said Berry. “It has caused uncertainty in this town, which is not good for our economy, nor for ongoing recruitment for the school.”

Spaulding, after the meeting, said, “The overall session just indicated a high level of support for NVU-Lyndon; it really emphasized how important an access institution is for students, how much it means to the region and how strongly they feel. I felt it was overall a useful meeting and provided lots of food for thought.”

“I think there are a lot of positives to the unification and I have total confidence in Elaine Collins and her team to make NVU work; they are doing everything they possibly can,” said Spaulding. He said online education is supplementing the college, “it’s not diverting money the online is going to help make money and pay the bills of the brick and mortar.”

Spaulding said, “We can’t let it linger, there is a high level of angst.”

NVU-Lyndon Enrollment Down 40 Percent In Decade

LYNDON CENTER — Getting more students into beds and classes at Northern Vermont University-Lyndon — and many colleges nationwide — has become increasingly competitive with declining birth rates and demographics, costs, and competitors, including online programs.

Massachusetts man gets 3 years probation in death of friend

Natural gas company to provide $10M in grants to nonprofits

Man dies from hypothermia after getting disoriented on walk

Officer gets probation for assualt on teenage student