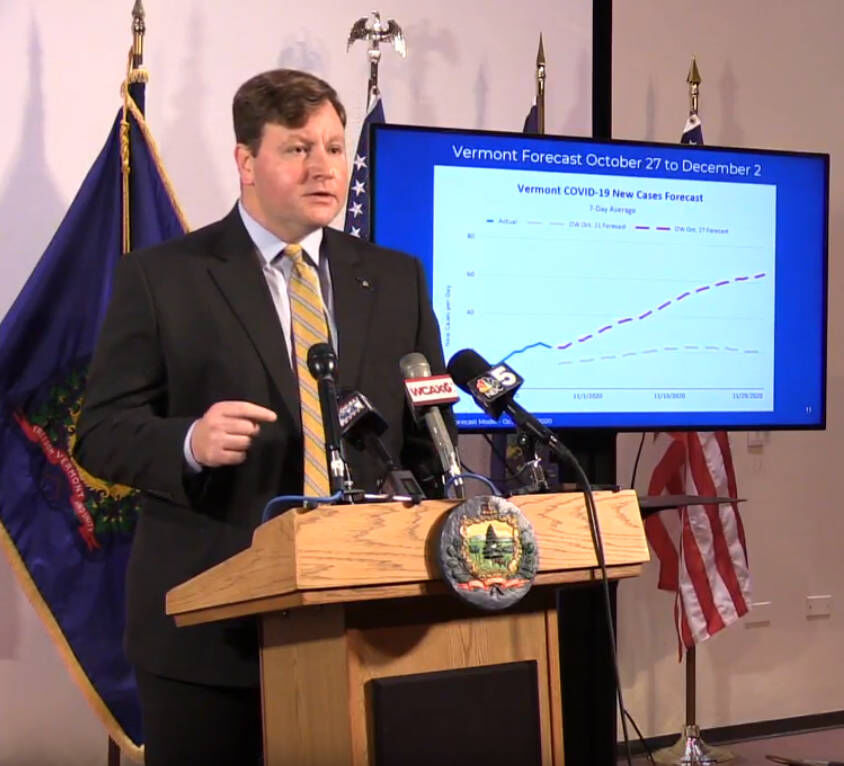 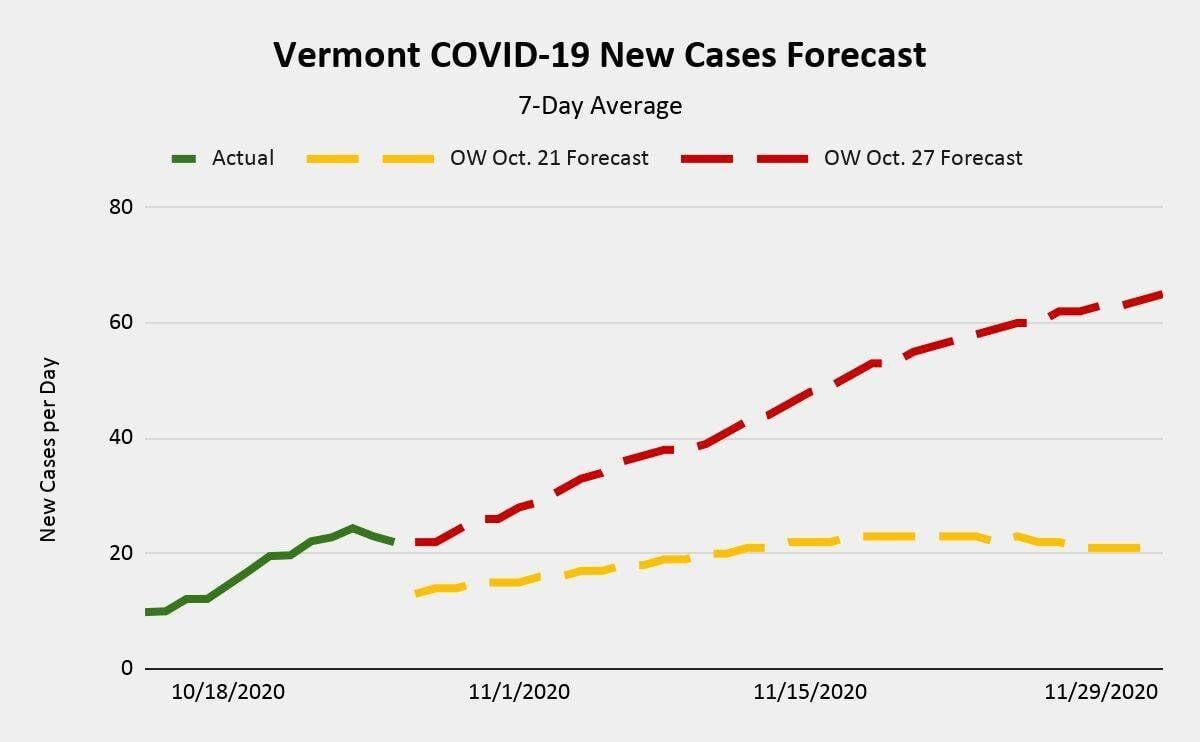 Vermont could be facing a dramatic escalation in COVID-19 cases if the projections in the state’s latest modeling forecast come to be.

During the state government’s latest coronavirus press conference Tuesday, Michael Pieciak, Commissioner of the Department of Financial Regulation which oversees the state’s coronavirus data and modeling, outlined the latest projection that Vermont could see over 60 cases per day by the end of November. This would rival the one day peak of 70 new cases set on April 3.

Just last week the forecasts Pieciak shared predicted Vermont would see an average of 20 cases per day in mid November and then start to dip down. The latest modeling, however, shows Vermont tripling that rosier prediction and the number of new cases continuing to rise straight through the end of November.

“With just 6 days of high case growth we are now on a very different trajectory,” said Pieciak, who noted that the projections are not set in stone.

“Just as quickly as that trajectory went up, we can get it to go down again based on our own individual actions that we partake in over the next few weeks,” said Pieciak. “We certainly have control over this in Vermont. It’s in our own hands to make that forecast not a reality.”

He referenced predictions from early in the pandemic that forecast high cases, hospitalizations and deaths that didn’t come to fruition because Vermonters adopted mitigation strategies and quickly turned things around.

“This has happened numerous times in the past where case growth has gone up, our forecasts have gone up, and where Vermonters have responded and those cases have gotten back down under control,” said Pieciak. “That’s certainly something we are hoping to see again here over the next 3 or 4 weeks in anticipation of holidays later in the month and next month as well.”

State officials noted, though, that the conditions from this past week has demonstrated a shift from other times during the pandemic.

Pieciak mentioned that for the first time since the pandemic began all 14 counties in Vermont reported at least 1 new case in the course of the last week.

“We are seeing cases spread out in a little bit more of a way than we have previously during the pandemic,” he said.

Pieciak said that, while somewhat less reliable because of the smaller populations and data points, projections on a county by county basis suggest a larger share of new cases in the forecast would be in Washington and Chittenden counties where the recent hockey outbreak occurred and St. Michael’s College is grappling with a developing outbreak. Pieciak said the projections suggest an uptick of cases in all regions of the state, though.

Pieciak reinforced the notion that if the forecast can jump so dramatically in one week, so too can it drop if new cases can be brought back down.

COVID-19 records of today will be dwarfed by January if Oklahoma does nothing, White House warns

Op-Ed: Are students liberal? Yes, but not everywhere

Health Commissioner Dr. Mark Levine also commented that Vermont has faced multiple, simultaneous outbreaks that have stretched into the wider community, as compared to earlier outbreaks that were contained mostly within a well-defined grouping and resolved without significant spread beyond the initial cluster of people.

“This is really a wake-up call for us all,” said Levine. “Remember this isn’t all data. This is real people.”

Levine said that while the several outbreaks have gotten a lot of attention, many of the state’s recent cases, which been above 20 cases per day 4 of the last 5 days, have been spread within small groups and families, often from gatherings that have moved inside and involve a meal, so people are in close proximity with masks off for an extended period of time.

“The bottom line is that small gatherings can have a big impact,” said Levine. “This is something I want everyone to keep in mind as the holidays approach and as you make your plans.”

Levine encouraged Vermonters to scale back traditional holiday plans and keep it among people within a household or who already have close contact with each other.

“The dinner table should not be so large and filled with multiple households,” he said. “It just doesn’t pass the common sense test during a pandemic.”

The officials pointed out that while the state has seen an increase in cases the last week or two, other metrics that the state follows are still favorable.

Gov. Phil Scott noted that Vermont only had 3 hospitalizations statewide on Tuesday. “We are in pretty good shape,” said Scott.

According to the Vermont Department of Health there were 4 new cases in the Northeast Kingdom on Tuesday’s report - 2 in Caledonia County and 2 in Orleans.

The latest travel map has resulted in the entire state of New Hampshire now being restricted with case rates in every county increasing.

According to the travel map, if Vermont applied the same restrictions internally based on case prevalence, Orleans County would have crossed the threshold and now be restricted to non-essential travel along with Windsor and Windham counties in the yellow category. Washington and Chittenden would be considered a red county with even higher cases per capita, however the state does not apply the same restrictions in-state and merely reports the data so Vermonters can be aware of the potential risks.

50 facts about poverty in America

Sitcom history from the year you were born

Can you solve these real 'Jeopardy' clues about cars?

50 car companies that no longer exist

Pop culture history from the year you were born

Nobel Prize history from the year you were born

Hollywood history from the year you were born

Can you solve these real 'Jeopardy!' clues about Westerns?

States with the highest rates of depression

Famous movie quotes from the year you were born

Major TV debuts from the year you were born