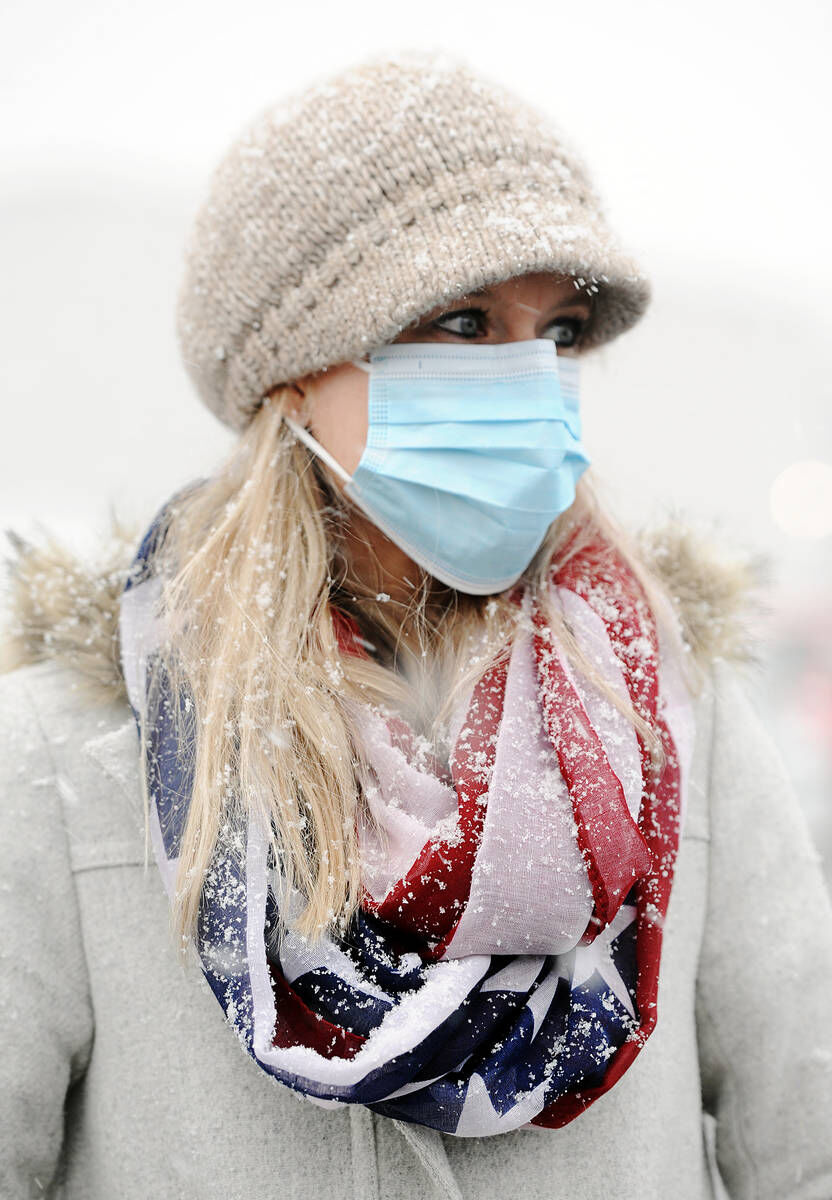 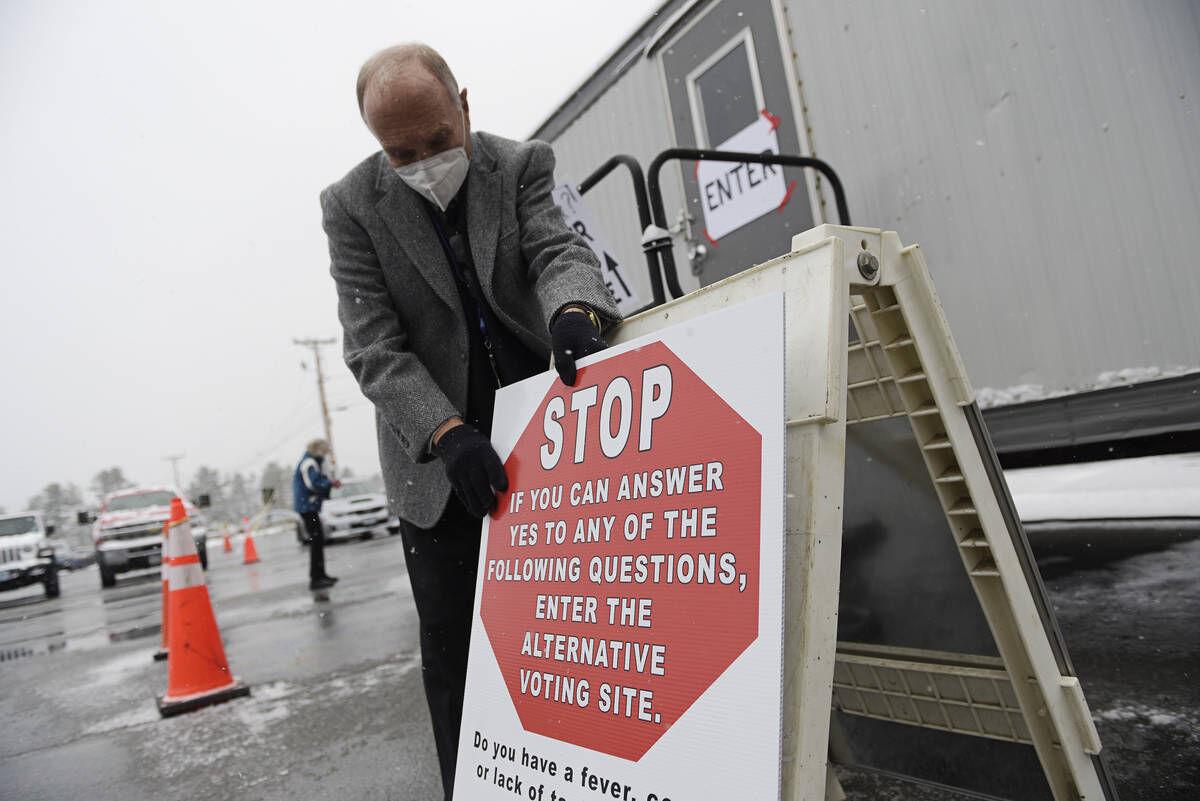 Milton Bratz puts up a sign outside of the Littleton, N.H., polling station on Tuesday, Nov. 3, 2020. (Photo by Paul Hayes)

Milton Bratz puts up a sign outside of the Littleton, N.H., polling station on Tuesday, Nov. 3, 2020. (Photo by Paul Hayes)

In Northern New Hampshire, communities are giving mask ordinances another look, as COVID numbers rise across the region.

The Board of Selectmen unanimously approved a temporary 90-day ordinance, which requires members of the public to wear a face-covering when entering any business (indoors or outdoors), worksite, government building or residential/commercial common area.

“They’re going to wait and see what happens in the next couple of weeks and make [the ordinance] stronger if needed,” said Gorham Town Manager Denise Vallee.

New Hampshire is the only state in the region without a statewide mask mandate. As a result, the decision has fallen to towns and cities.

Other local communities are expected to follow Gorham’s lead.

Berlin will decide Monday on a police-enforced mask ordinance and Franconia is in the process of drafting its own mask regulations.

More communities may take up the matter in the coming weeks.

In Littleton, Select Board Chair Carrie Gendreau said a mask ordinance has not been discussed but noted “with the increased cases, it’s possible that we may have people ask us to consider it.”

Question is, who would propose it?

Gendreau figured it would be the town’s health officer, Milton Bratz. However, Bratz said health officers are expected to enforce laws — not propose them — under guidelines set by the state Department of Health and Human Services (DHHS).

“Entering the summer I was on the school re-opening committee and we had a meeting at the high school. I made a recommendation that schools not open and gave eight or nine reasons. The first being we didn’t have a vaccine and the second being that 40% of people who have it don’t show any symptoms. The superintendent had a different opinion. So I called [DHHS] and they said they preferred health officers to work within plans, not make recommendations. They said our job should focus on mitigation of transmission.”

Biden zeroes in on the teetering economy in first week

These are Biden's promises on the climate crisis

For that reason, Bratz did not make a recommendation to the town’s Select Board.

“Back in August, I looked at the mask ordinance that Nashua had put together and I was tempted to give it to the Selectmen, but then I didn’t, because of [DHHS guidance],” he said, adding, “I personally think a mask ordinance would be a good idea to at least debate.”

Some communities may require more convincing than others.

Earlier this year, Lancaster’s emergency management director Benjamin Gaetjens-Oleson approached the Board of Selectmen with a mask ordinance.

“It was brought up at least two months ago and [the Board of Selectmen] didn’t feel it was a necessary step at the time and weren’t comfortable with it, to begin with,” he said.

The Bethlehem Board of Selectmen took up a mask ordinance suggestion in August. They drafted a 12-page ordinance but ultimately decided not to act, citing general compliance and low case numbers at the time.

Chairman Gabe Boisseau said during the discussion ” “We have a solid draft of an ordinance we could potentially put into a public hearing and tweak some of the wording if cases go up. We will keep this one in our back pocket. Hopefully, we don’t have to use it, but we can potentially revisit it if we do.”

Meanwhile, in Piermont, the rumor of a mask ordinance drew a crowd of opponents to a select board meeting in August.

According to the meeting minutes, “There was never an ordinance to vote on. No document was ever drafted. Audience reinforce overwhelming discern [sic] about any face mask mandate.”

The push for mask-wearing comes as northern New Hampshire experiences its highest COVID case numbers of the pandemic.

There are currently 13,470 active case in New Hampshire including 45 in Stewartstown, 25 in Colebrook, 17 in Berlin, 7 in Pittsburg, and at least one in Bethlehem, Carroll, Clarksville, Columbia, Dalton, Easton, Gorham, Haverhill, Jefferson, Lancaster, Lincoln, Littleton, Milan, Northumberland, Piermont, Stratford, and Whitefield.

Those numbers include an outbreak at the Coos County Nursing Hospital in Stewartstown that has infected more than 50 residents and staff, with two resident deaths reported.

BUT HOW MANY ARE ACTUALLY SICK? I keep asking the question and don't get an answer. Case count is a completely meaningless number, especially as the PCR test is an iterative amplification test and tends to amplify noise, thus causing false positives.