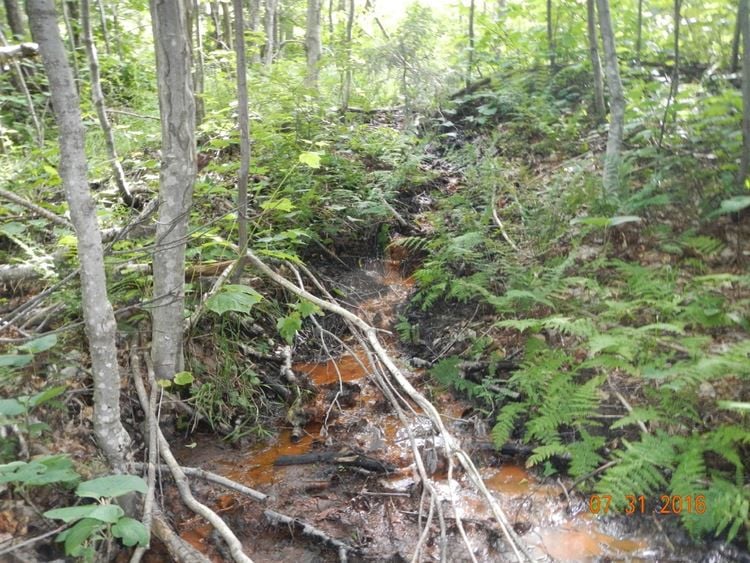 Folks, it’s high time for Green Mountain Power (GMP) to host a walking tour, with news reporters, top state officials, ecology scientists and politicians, all walking on foot along the entire 4 mile wind turbine array of twenty-one 459 foot tall turbines that they own on Lowell Mountain. I was up there recently, and Vermonters need to know what I saw. The ecology of this site is a whole lot different than when I walked and photographed the site several years ago, before construction.

Let’s do this walk on a nice sunny day, starting at turbine 1 at the north end. The first thing everyone will notice is that a tremendous amount of blasting took place, which created an interstate size roadway between turbines whose steep side slopes of blasted rock slope down over 100 feet in places. And wherever the roadway meets a sudden rise along the ridge, it was blasted right on through, creating cliffs on either side of up to 40 feet high. Also, the turbine pads themselves are 200 feet wide and blasted out of the mountainside. This sight brings back memories of mountaintop removal in West Virginia where I went through junior high and high school. About this time a member of the press might step over to a GMP official to ask how much explosives were used to blast this mountain. GMP will probably not answer even though they should have access to the exact figure. Keep in mind, though, that a person who was part of the Lempster, NH turbine project stated that they used one million pounds of explosives at that site which has only 12 turbines and is a less rugged site.

Hopefully, Vermont’s premier renewables developer, David Blittersdorf can be with us on this walk because I recorded him last year in Middlebury, and he was also recorded in 2010, saying that we need 200 miles of ridge line turbine development in Vermont to get to our goal of 90% renewables by 2050. To complicate matters, this Lowell array does not count as renewable energy in Vermont because GMP sold the renewable energy credits for a lot of cash to another state so they don’t have to put up their own turbines.

We can walk 12 abreast down the turbine road so that people get a clear view of what is ahead. As we proceed along the ridge, the heat and dust will start to get to us. The heat and exposure after construction have already gotten to and killed hundreds of trees along both sides of the road, even those whose roots were never touched by construction. What used to be shaded mosses and ferns is now exposed, blasted rock. And even more trees have died from whatever weird chemicals seem to be leaching through the countless tons of blasted rock, as can be seen in at least one drainage ravine where trees have died and are dying hundreds of feet down from the site. Are there any volunteers to drink that water?

And then there are the level spreaders (erosion control structures). At least two have failed, as we will see by looking at newly formed erosion channels below them, with freshly exposed roots. The Public Service Board and GMP were both warned that these level spreaders on steep slopes would fail, but neither paid any attention. This erosion will only get much worse over time as will be seen in future photographs that GMP allows the press to take in furtherance of public knowledge. Also, the large impervious surfaces at the site are causing pre existing streams to widen. When the next flood comes, Lowell downstream will be in deep trouble.

Vermont’s Agency of Natural Resources (ANR) sees none of this. In fact they describe this place as a wonderful site! Why is this? I have worked in ANR for over 5 years as one of 14 rule makers at the Fish and Wild Department of ANR. Most of the ANR biologists are from this department. I have noticed with fascination during this time how much these people bend to political pressure. In just one example, a high official there stated as scientific fact that bullets that were flying through trees over a backstop and toward a village at Fish and Wildlife’s own shooting range were unlikely to kill people at the trajectory they were flying at. No one in the department dared object to that blatantly false and dangerous scientific statement. I got him to see the light. There is not enough space here for me to reveal the slanted science I have noticed on fish, fur bearers and bears because of political pressure. It would be entertaining to watch some of these biologists try to pass a polygraph test on whether they bend to political pressure. The wind turbine loving Shumlin administration has made sure these people toe the line.

As we continue on our hot walk, we will notice a lot of dead shrubbery off to the sides along most of the route that were killed by herbicides as GMP tries to kill the many invasive species of plants that were accidentally introduced to this formerly pristine site. By the way, has anyone heard a bird yet on this walk? When there was montane fir and birch forest here, I was constantly entertained by bird calls from under the canopy. Now we hear mostly the whistling, clanging and throbbing of the turbines.

I hope that Tony Klein, leader of the House energy committee, Margaret Cheney, one of three members of the powerful Public Service Board (PSB), and Governor Shumlin are on this walk, because I want to pose a question to them. In her resume, upon taking her seat on the PSB, Ms. Cheney said that one of her favorite forms of recreation is long distance jet travel. Governor Shumlin has done, and will continue to do, countless miles of jet travel. Tony Klein bragged about doing a lot more travel once he retires this year. My question to them is, why by their actions or lack there of in their positions of power, have they allowed the poor Therrien family of Sheffield to suffer from incessant wind turbine noise which caused them to abandon their home, while they themselves splurge on long distance travel while talking about the horrors of global warming. The amount of jet fuel used by two people on a round trip vacation to Europe would provide more than enough equivalent energy to heat the Therrien’s home for a year. What heartless energy hog hypocrites!

Human leaders have always been repugnant in their insatiable desire to conquer and command others with money and power. Little Vermont has been caught up in the renewables industrial complex, which is a whirlwind of money creating power which creates more money which creates more power. These leaders don’t even begin to care about saving the planet, as can be seen by their own energy hoggishness. They are into renewables for the money and the power. Margaret Cheney’s husband, who is running unopposed by anyone from either party and is 100% guaranteed to win reelection, has received a decent contribution from large wind turbine developer David Blittersdorf, the one who said we need 200 miles of large wind turbines in Vermont. This money was added to Cheney’s husband’s already huge campaign war chest, and can’t possibly make a bit of difference in getting him reelected. So what is the real purpose of this donation? Will Margaret Cheney ever vote against a large wind turbine project?

When our troop of walkers get to the last turbine at the Lowell site, number 21, we will be hot and dusty and overdue for a break. I will point to a small section of ridge that never got developed, just a few feet from us, across the Lowell town line in Eden, where we can plop down in the cool shade amongst the mosses and ferns, and we can reflect on where we have been and where we are going.

Apparently Justin is incapable of an unbiased post. 1st. Wind generation on a mountain top does not produce discolored streams. 2nd, Justin's pics are not verfied as legitimate to the location. Second. Hundreds of mountain top wind sites have zero environmental impact in regards to any man made pollution. I recently visited 2 sites in northern Maine, operational for over 2years. Zero local environmental impact. However, the economical impact to the locals has been significant, with lower rates and local jobs. One should alway question an author who posts unverified bs.