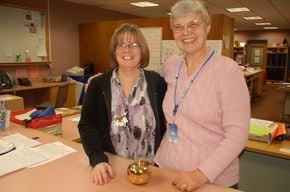 Darcy Townsend, at left, is shown with Marcia Therrien at Lyndon Town School. Townsend recently nominated Therrien, the secretary and receptionist at Lyndon Town School, for the Apple Award, given to one school office professional in each of five regions by a statewide association representing professionals who work in educational offices in Vermont. 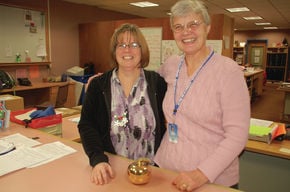 Darcy Townsend, at left, is shown with Marcia Therrien at Lyndon Town School. Townsend recently nominated Therrien, the secretary and receptionist at Lyndon Town School, for the Apple Award, given to one school office professional in each of five regions by a statewide association representing professionals who work in educational offices in Vermont.

LYNDON -- Darcy Townsend, who works as the special education administrative assistant at Lyndon Town School, nominated LTS secretary and receptionist Marcia Therrien for a statewide honor through the Vermont Association of Education Office Professionals. At an event hosted by the group earlier this fall, Therrien was surprised to learn it was she who was receiving an annual award for this region of the state from the group.

In addition to Townsend, LTS staff member Lisa Paquette also nominated Therrien for the award, which came with a heavy brass apple, as the award is called the Apple Award, presented to "outstanding educational office professionals who have made a special contribution to support the education of Vermont's students through their work."

"Teachers or other employees can go to Marcia with any question and if she doesn't know the answer, she can refer us to the person who can help ... She is always thinking ahead to the next project or event and making sure the right people are on top of what needs to be done, whether it is kindergarten registration or 8th grade graduation," said Townsend and Paquette. "Marcia greets everyone who comes into the office with a smile and a warm greeting. Her favorite greeting is, 'Top of the morning to you!' Anyone who stops by her desk with a question or just to chat is made to feel important and she will stop whatever she's working on to listen to what you have to say."

Karen Aubrey, who works in human resources in the Caledonia North Supervisory Union, echoed the letter saying Therrien is known for greeting visitors with a warm smile and a "Top of the Morning to You!"

"She always goes a step above what she needs to," said Aubrey. "She goes the extra mile with a smile. She handles herself with great professionalism and takes pride in her job."

The Apple Award is given annually to one person in each of the five regions served by the Association. Therrien, who has held her position at Lyndon Town School for eight years, said she was totally surprised at the program for the Association held earlier this fall, to learn it was she who was being honored. "I was totally caught off guard," she smiled. "It's an honor, it really is. I don't know how to put it into words."

"There are no two days alike here," said Therrien of her job , "It's a nice variety, and I like the people I work with."

Fifth-grader Caitlin Taylor, 11, was in the office with a note about her after school plans and chatted with Therrien on a recent Thursday afternoon. When she heard some teasing about what Therrien was getting an honor for, she said it should be for "being the nicest lady ever!" Therrien's smile said all there was to say about how much that comment meant.