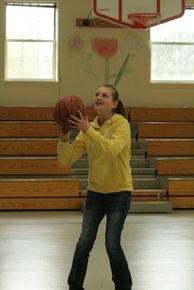 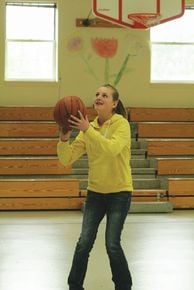 COVENTRY -- Kaylee Bowen is an "all around superstar," according to the principal of Coventry Village School Matthew Baughman. Bowen, a 14-year-old eighth grader, plays both basketball and softball to stay fit, as well as doing exercises like stretching and running regularly.

Plus, she said, "We have to take vegetables at school."

At home, Kaylee chases around a pug puppy named Bella for exercise.

Kaylee gets good grades, which is mandatory for participating in sports teams. But when she gets to Stanstead College next year for high school, Kaylee said she'll be required to play one sport every season.

Her sports coach at Coventry, Danielle Wright, starts the athletes off with stretching exercises and running and tests them for skills to determine where they need to work to improve.

When asked why the school chose her as the fittest kid at Coventry, Kaylee shyly said, "Maybe I worked a little harder."

Baughman said the student chosen each year works hard, does well, and is self-motivated.

"When they mentioned Kaylee's name, to me it sounded very appropriate," he said. "One of the great things about Kaylee is she does the right thing but she's very quiet about it." Kaylee is dependable, responsible, caring and a good friend to others, Baughman said.

Paraeducator April Bapp agreed, saying that Kaylee is hard worker. "She always makes sure her work is done, and it is usually done before the other students."

Kaylee gets along with other students, Bapp said. "She knows when it is work time and when it is time to relax a little bit and socialize." Bapp thinks Kaylee will be a big success in high school next year.

"She's quiet but she's extremely nice. She knows what she needs to do and does it," Bapp said.

The math whiz goes camping with her family in summers and skiing at Jay Peak and sledding on the school grounds in winter. Kaylee said her family usually tries to pick a camping spot that's close to an amusement park like the Great Escape or Fun Town and Splash Town.

When asked what advice she would give other students who want to stay in shape, Kaylee said, "Eat their vegetables and try to work hard at exercising."