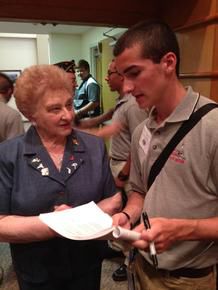 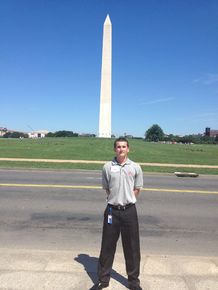 Robert Lemnah, the son of Beth and Gregory Lemnah of Lyndonville, was honored recently by being selected as Vermont's representative to Boys' Nation. In fact, the Northeast Kingdom dominated the leadership selections made this year at Green Mountain Boys' State, a government simulation program sponsored nationwide by the American Legion. The two alternates selected to attend Boys' Nation in the event Lemnah could not attend were: Noah Manning of Lyndon Institute and William Morse of St. Johnsbury Academy.

Among the highlight moments for Lemnah at Boys' Nation, which was held July 20-28 at Marymount University in Arlington, Va., was an hour spent with President Barack Obama. The president spoke to the young leaders about being role models for their classmates and the benefits of hard work.

"It was very cool that the most powerful man in the world took time out of his day to spend time with us," said Lemnah. The Boys' Nation delegates were told that just before President Obama met with them, he had signed a trade treaty with Israel.

Another highlight for Lemnah at Boys' Nation was the mock Senate sessions he participated in. The young leaders wrote bills, debated them, and worked toward getting their initiatives passed into law. At the end of the event, Lemnah was amazed at how such a diverse group of young men -- with widely ranging political beliefs -- could learn to compromise and get along.

"I think the most important thing Boys' Nation taught me is that even if I didn't like another person's opinions, I learned to respect them and hear them out," said Lemnah.

On the advice of a friend he met at Boys' Nation, Lemnah returned to Vermont and applied for an internship with the Northeast Kingdom Democratic Party office, and subsequently was hired on with that organization.

Another friend from Boys' Nation extended an invitation to Lemnah to attend the 2012 Democratic National Convention in Charlotte, N.C. He will be at the convention to hear President Obama's acceptance speech.

At Lyndon Institute, Lemnah is vice president of Student Council and a varsity soccer and track athlete. During the summer, he attended the USA Hockey Junior Development Program for four days in St. Paul, Minn. where he earned a credential as a youth hockey referee. During the winter months, Lemnah will referee a slate of games in the Metropolitan Junior Hockey League, which has teams in states spanning from Maine to Florida. Lemnah is among the youngest of the referees to work in Junior Hockey, out of which players often emerge onto NHL farm teams or NCAA hockey programs.