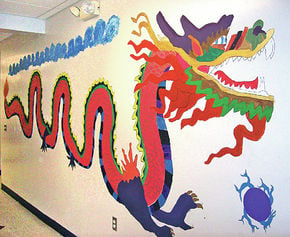 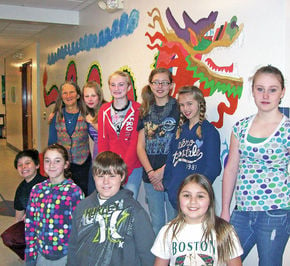 In celebration of the Chinese Year of the Dragon, and as a culmination of a study of China and its cultures, Miller's Run and Newark Street schools participated in a variety of in-school, afterschool and evening events.

Each year Newark School holds the Evanne Weirich Celebration in honor of the founder of the Newark Balkan Chorus. A country or culture is chosen for a month long study. During this year's study of China, students practiced calligraphy, Chinese landscape, ribbon dancing, carving name chops and drawing dragons. The first- and second-grade class made a 3-D map of China, illustrated a Chinese folk tale and made hats and lanterns. Linda Wray, a local artist, helped the Kindergarten class make ribbon dance ribbons. Robin Russo, a well known fiber artist, brought silk worm cocoons for a hands on workshop to show students how to spin silk and create silk "paper."

The culminating event at Newark School was held in the evening for parents and community members. The evening began with a performance of the Balkan Chorus, presently directed by alumnus Elly Barksdale. Next, amid displays by classrooms and the afterschool program, the whole school participated in a theatrical version of the Chinese folk tale, "The Jade Stone." The upper grades held speaking parts, the younger grades were led in the songs by music teacher Marcia Hagman, and the fifth- and sixth-grade class manipulated a 30-foot long dragon through the crowd. The evening ended with snacks, thanks to help from the after school cooking class.

Miller's Run School has a dragon for a mascot, so it was appropriate for the 30-foot dragon to greet students at the door on Chinese New Year. Miller's Run students also participated in learning about several Chinese art forms. The eighth- (and selected seventh) grade students presented a folk tale play, entitled "The Magic Paintbrush." Newark students and the rest of the student body attended an afternoon performance and parents came to see the evening show.

Thanks to Adrienne D'limpio at Lyndon Institute, three Chinese dorm students held workshops at both schools. Students learned Chinese numbers, played Chinese Bingo, sampled snacks, and received chopstick lessons. These were useful because thanks to the cooks at both schools, one day was dedicated to Asian food and everyone ate with chopsticks!

A lasting memento of the China unit has been created by the Sixth Grade Art Club at Miller's Run School. Sixth-grader Alaura Rich drew a dragon, which students magnified onto a 14-foot hallway wall. The students worked together to choose colors, and drew and painted during their Art Club time to complete the project. They learned a lot about working together as a group, and have a lasting piece of their artwork on the wall. What a perfect way to honor the Miller's Run mascot and the Year of the Dragon!

The China unit at both schools was initiated by art teacher Annie Gibavic's travel to China through the UVM Asian Studies Outreach Program. Burklyn Arts and the Vermont Children's Theater were also a great help with the theatrical productions.