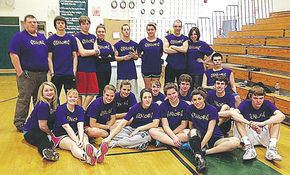 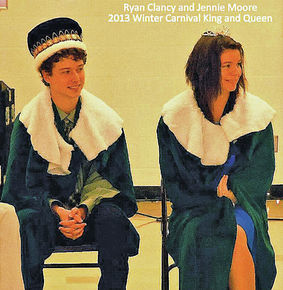 Winter Carnival week is what every Danville student looks forward to each year. In the seventh through 12th grades it's the entire week before February vacation. It can be both a stressful and extremely fun week and it's all about competition.

The competition starts when you hit seventh grade and goes until you are a senior. At the beginning of the week, the overall theme is announced as each class gathers in a meeting to decide their individual theme. Each high school class nominates a King and Queen from the senior class and the middle school nominates a Prince and Princess from their classes.

Monday through Wednesday of winter carnival week consists of after-school work sessions for the poster, sculpture and skit. This is where each class attempts to incorporate their theme into each piece. New this year was the dress up week. On Monday, the dress up theme was 80's, Tuesday was Nerd Day, Wednesday was Mix and Match, and Thursday was dress as your theme. Points were awarded for whoever dressed up and for placement in the catwalk during lunch.

This year's theme was Book Series. The senior class chose "Harry Potter"; the juniors chose the "Hunger Games"; the sophomores chose "Chronicles of Narnia"; the freshmen chose "Twilight"; the eighth-grade class chose "Magic Tree House"; and the seventh grade chose "Diary of a Wimpy Kid." On Thursday, the poster, skit and sculptures were judged.

Friday was the big day and everyone was so excited. Winter Carnival Day! Both the individual events and the team events filled the morning. This is the chance to rack up a ton of points for your class.

At the beginning of the month, each class gathered in a meeting to decide who would participate in team events like hot shot, volleyball, broom hockey and pinball; or the single events like shaving cream pile up, arm wrestling, just dance, and the list goes on. There are also individual events going on throughout the morning for those extra points, like peanut push, trashcan obstacle, Danville's Got Talent, caddy stack, etc. You don't even have to be the best (more points if you are) but the more people you get from you class to do it, the better.

The biggest event of the day is tug-o-war where the entire school gathered in the gym to watch classes pull their "rivals" across the gym. Each class has a weight limit and Mr. White was the judge. He sounds the horn letting the classes know when to go, and when one class pulls the center over the line, he would sound the horn again. If you are the class to win the round, when you hear that sound, you immediately drop that rope and jump with excitement. By the time the day is over, your ears are ringing from everyone screaming at the top of their lungs. This year the eighth grade won.

The next day at the Winter Carnival Dance (put on by the Yearbook Committee who is donating the money and food items collected at the door to the Open Door/Food Shelf here in Danville) the winners of individual events, winter carnival overall, and the royalty were crowned. Overall, the competition was between the all mighty seniors and the sophomores. The competition seemed extremely close when ribbons were being distributed by Mr. White, but the seniors were the ones to take it all.

The title of King went to Ryan Clancy and Queen went to Jennie Moore, while Prince went to Michael Langham and Princess went to Molly Copp. The 2013 Winter Carnival week was a success!