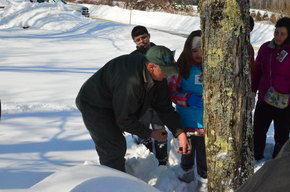 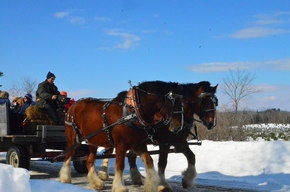 BETHLEHEM, N.H. -- As maple sugaring season across the region kicks into high gear, The Rocks Estate in Bethlehem is taking its New Hampshire maple experience to a new level.

This weekend marked the first of four weekends visitors signing up for the program at The Rocks can learn about maple sugaring and its history and participate in the tree identification and tapping process as well as syrup tastings.

The day kicks off with a video followed by an informational presentation led by volunteer docent Nancy Czarny.

Sap is created when the tree pulls sugars stored in its roots to feed the branches above as they bud in the spring, she said.

The goal in boiling is to get rid of the water and concentrate the sugar.

"It's not syrup until it's a certain density of the liquid," said Czarny.

Containing sugar are two types of New England maples, red maples and sugar maples, with the latter having the higher concentration of sugar.

As for damage to trees when taps are drilled, Czarny said maples are good at compartmentalizing and form a hard shell around a hole created by a tap so disease and bugs can't get beyond it.

While the origin of sugaring can't be verified, Czarny said Iroquois legend holds that an Indian chief threw a tomahawk into a tree and came back the next morning to find running sap that he then boiled, discovering syrup.

The Rocks Estate has had a maple weekend for more than 30 years, said Manley, and through the years has expanded it.

The maple program is scheduled on March 22-23, March 29-30 and April 5. Reservations are recommended, with walk-in visitors permitted as space allows.

The program runs from 10 a.m. to 4 p.m. and begins with the video that chronicles the history of sugaring and how to identify trees.

The Rocks experience is hands-on, said Manley, and visitors get to drill holes in trees, install taps and hang buckets.

Nearly 70 people signed up for March 15 and at least twice that many are signed up for this weekend, he said. Most visitors spend three to four hours.

The experience also features tractor rides to the Rocks' sugar house, beside which is an interactive maple museum with sugaring artifacts.

There is also a horse-drawn carriage ride through the estate with a guide imparting local history and information on maple sugaring.

"We've been getting calls from all over New Hampshire," he said.