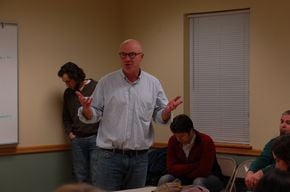 Ed Fox, chief operations officer of the Vermont Foodbank, talks about composting this week in a gathering of compost enthusiasts who gathered for a meeting presented by the Highfields Center for Composting. The meeting was held at the Northeast Kingdom Waste Management District in Lyndonville. 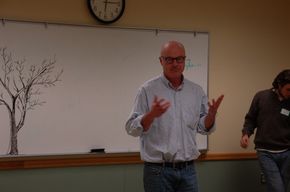 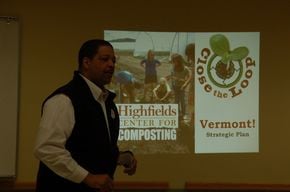 Joseph McClain, general manager of the food service program at Lyndon State College, operated by Sodexo, speaks about the composting program at the college. 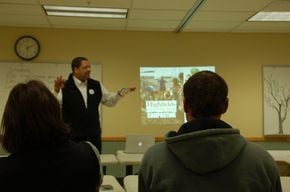 Ed Fox, chief operations officer of the Vermont Foodbank, talks about composting this week in a gathering of compost enthusiasts who gathered for a meeting presented by the Highfields Center for Composting. The meeting was held at the Northeast Kingdom Waste Management District in Lyndonville.

Joseph McClain, general manager of the food service program at Lyndon State College, operated by Sodexo, speaks about the composting program at the college.

LYNDONVILLE -- It's pretty hard for someone whose entire career has involved the word "waste" to suddenly be asked to drop that word from a presentation he was about to deliver, but that was the pressure Paul Tomasi, executive director of the Northeast Kingdom Waste Management District, faced this week as he spoke at a meeting of composting enthusiasts.

NEKWMD i is based in Lyndon and serves more than 40 area communities.

Instead of the w-word, Tomasi found himself asked by Michael Miller, an adjunct faculty member who teaches science at Lyndon State College, to instead use the term "food scraps."

Miller teased Tomasi that he had already caught him twice using the w-word and said detentions would be given out -- food scraps are not waste was the point of the semantics joke. The composting group wants to get the word out that food scraps should not be wasted, they should be collected and re-used.

The idea is to create a strong composting network and system in the NEK to save as many food scraps as possible from the trash stream for compost, local farms, and more. This is the intention of Highfields and they said they are intent on helping the NEK toward that goal.

After hearing from a few people and organizations who are successfully composting already, they broke into smaller groups to brainstorm ideas for composting in the NEK. At the end of the meeting they discussed three core areas: compost sites, hauling and food scrap collection.

In a news release, Noah Fishman, program manager for Close the Loop VT! at Highfields, said projects including a collection route that will pick up food from restaurants and schools is planned, along with a pilot program that will provide resources, materials and potential grant funding for community members to develop composting projects. The program also will make available education and workshops on home composting, school composting and farm-scale composting.

The partnerships being planned are possible, Fishman said, through partnerships with the Northeast Kingdom Waste Management District, USDA Rural Development and the Vermont Agency of Natural Resources.

James Bentley of St. Johnsbury Academy said his school embarked on a composting program in 2009, after a student capstone graduation project helped to launch the beginnings. "It's lowered our waste to the landfill significantly, and I just believe strongly that more institutions in the community should be doing it," he shared.

Ed Fox, chief operations officer for the Vermont Foodbank, and board member of the Highfields Center for Composting, said the food bank has a zero waste policy and recycles, reuses and composts everything. "We feel that composting is part of the food system," he said.

Joseph McClain, the general manager for the Sodexo Company at Lyndon State College, said the college has a successful composting program. "We believe in composting and treating the earth in a friendly way," he said.

Highfields staff offered a short film on the importance of composting, saying food scraps being pulled from the waste stream means less "methane going into the sky, and leachate polluting our waterways and threatening our watersheds ... if we were to compost all of our food scraps (in Vermont) that's equal to not burning 12 million gallons of gasoline," in a year's time.

Highfields noted that in June, Gov. Shumlin signed the Act Relating to Establishing Universal Recycling of Solid Waste, "whose goal is to move Vermont toward sending as little solid waste to landfills as possible while maximizing recycling and composting." The Act will require all commercial businesses divert their food scraps by 2017 and all residents by 2020.

Tomasi explained that state laws will continue pushing people to reduce waste, but wheels are spinning now to leap frog programs ahead of that date.

Fox, the head of the Vermont Food Bank, said during his presentation to the group, "We think there are more ways to rescue more food and keep it locally and divert product from the landfills."

According to the Highfields news release, "It is estimated that Vermont produces some 120-130,000 tons of food waste annually, much of which is landfilled, a practice that contributes dramatically to greenhouse gas emissions and toxic leachate. The farm-to-table-to-landfill model is one echoed throughout most of the United States, making landfilled food waste the largest source of methane greenhouse gas emissions in the country."

Find out more by visiting HighfieldsComposting.org.