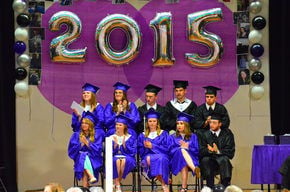 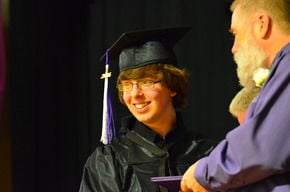 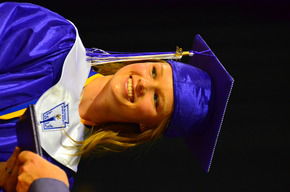 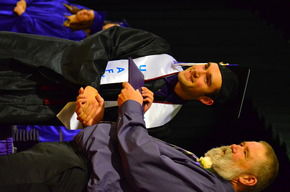 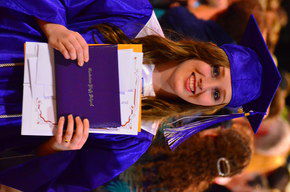 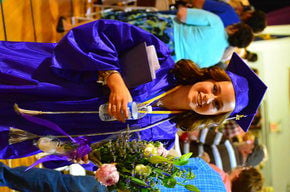 GROVETON, N.H. -- Twenty-eight Groveton High School graduates grabbed the spotlight during their commencement Friday, when they received more than $73,000 in scholarships and were encouraged to soar like eagles.

Honors speaker Jessica Fury, who moved to the North Country from Portsmouth for her sophomore year, also thanked them for their friendship.

"In Portsmouth, I was one of over 200 students in the class I grew up with," Fury said to the graduates and their families and friends packed into the school gymnasium.

"After three years, I can say that I know at least a little bit about all of you and I hope you can say the same about me," she said. "I want to thank you, graduates, because I did have some close friends in Portsmouth, but I never knew them as well or loved them as much as I love some of the people here with me on this stage."

"In Groveton, I have met some teachers who sincerely care about my successes and failures and always encourage me to reach the next level," she said. "I know that all of us will cherish the quality of education that you have given us through the years."

"It is not who you are, where you live, how you are raised or what you are capable of that defines you," she said. "It is what you do that does."

"Regardless of what you or I think of the education system at the federal level, things are spectacular here," he said. "It's a little oasis ... To my friends and teachers, thank you for making school more enjoyable than I ever thought it would be, and allowing me to act and speak as an individual."

Valedictorian Alyssa Blodgett referenced the 1994 film "Forrest Gump" and its famous phrase of life being like a box of chocolates in that you never know what you're going to get.

"Forrest used these words of wisdom from his mother to make the most out of a horrible deck of cards he was dealt from birth," said Blodgett. "I believe every one of use could learn a lesson in determination from Forrest."

Blodgett said, "Keeping tough, optimistic and true to yourself through all of life's stages will give you the most control of your own experiences and make more fond memories than upsetting ones. To the Class of 2015, life is like a box of chocolates. You never know what you are going to get. But if you stay strong and are prepared enough for all kinds of situations, you can endure the surprises your box decides to throw your way."