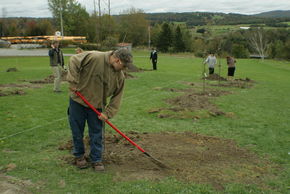 Ethan Hartley, a sophomore from Irasburg, smooths out the area around a newly planted apple tree on the grounds of Lake Region Union High School Wednesday. 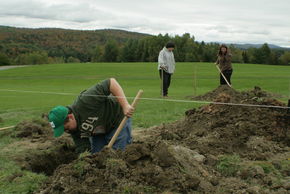 Carter Aldrich, a freshman from Glover, digs a hole for a fruit tree on the grounds of Lake Region Union High School Wednesday.

Ethan Hartley, a sophomore from Irasburg, smooths out the area around a newly planted apple tree on the grounds of Lake Region Union High School Wednesday.

Carter Aldrich, a freshman from Glover, digs a hole for a fruit tree on the grounds of Lake Region Union High School Wednesday.

This marks the third year the school has been honored with a silver medal in the annual rankings, moving up from seventh to third in the state this year. Only nine schools in Vermont received silver medals, and another five earned bronze, including Canaan Schools. No Vermont school earned a gold, which indicates the school is in the top 500 schools that met all of the criteria.

Nationally, Lake Region ranked 1,223, up from 1,334 two years ago, placing it in the top 5 percent of all public high schools in the U.S.

The U.S. News and World Report ranking is different from programs that recognize only the "high flyers," Principal Andre Messier said Wednesday.

Instead, the magazine ranks schools by how well they serve all students, including economically disadvantaged populations.

And that's where Lake Region shines. "For us, the reality is that's the majority of our population. That's who we are," Messier said.

There is virtually no "achievement gap" at the school, where there is only a 4 percent difference in proficiency in core subjects between those students whose families have enough money and those whose families do not.

"They look at the complete picture," Messier said.

The majority of the data comes from the results of the New England Common Assessment Program (NECAP) tests administered each year, but the program also looks at things like graduation rates, college preparedness, and how proficient students are compared to statewide numbers.

"Regardless of those major red flags that indicate kids will not be successful, kids can get by that," Messier said. "It's a matter of attitude."

Messier said he tells students, "We are all blessed with a brain."

The school must have supports in place, like summer math programs to get up to speed, Messier said, but kids who've struggled in the past are not doomed to that fate.

"As soon as they know you believe in them, you see them grow," Messier said. "You see them looking at post-secondary education and careers."

"We try to stop kids from falling through the cracks," Messier said. "Do we make mistakes? Absolutely."

"They may slip through one crack, but we catch them at the next," he said.

A new law coming into play that mandates personal learning plans for each student is not concerning to the Lake Region faculty at all, because that's exactly what they've been doing.

And an increase in expectations, while worrisome to some parents, has been well received by students. "They can handle it," Messier said. "Kids don't want easy classes. They want to be challenged."

With the Common Core, a new set of expectations coming next year, the ante will be upped once again, but Messier is excited about the change.

First, kids get their results immediately -- rather than months later -- since the Smarter Balanced Assessment Consortium (SBAC) tests are taken online. Plus, kids can take the test a second time after identifying and working on problem areas. Each year when students take the test, the test begins where the student left off the prior year, so charting individual students' growth will be much easier.

Messier said another change is that instead of being compared only with New England schools, the Common Core allows schools to see where they fall nationally.

The way Messier sees it, "Here's the standard. Now how do we get kids there?"

Lake Region students nearly always perform at or above the state average on standardized tests like the NECAP, and it has not gone unnoticed. Messier said other schools call and ask, "How are you doing it?"

"We don't teach to the test. We teach to what the expectations are," he said.

That's the real world, he said. If your job requires you to perform certain duties to a certain level and you fail to do so, you'll be out of a job, he said.

The school is working on a portfolio system in which students would compile their work over four years for evaluation at the end of their senior year. That culmination of four years of growth, to Messier, is a much larger data point than test scores.

Lake Region has only 379 students, "which makes it much easier for us to know each kid," Messier said.

If a school is too large, it is difficult to personalize learning and makes it more likely that students will fall through cracks, he said. But too small, and the students are disadvantaged by a lack of programs.

Lake Region filled its 10 school choice slots this year, and in fact, had a waiting list. From what he's heard, students who've transferred in, "really like the feel of it. The atmosphere. That's what is comes down to."

"That doesn't mean we don't have our bumps. It isn't all about being warm and fuzzy either," Messier said. "It's creating a culture where they know we care."