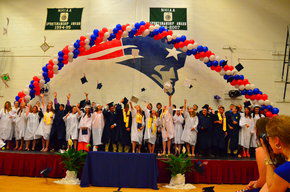 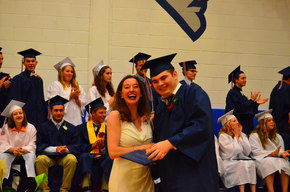 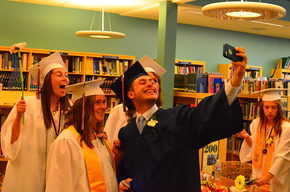 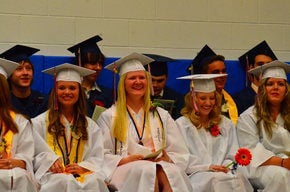 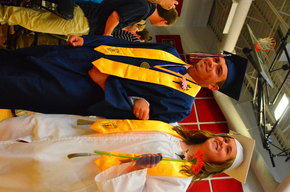 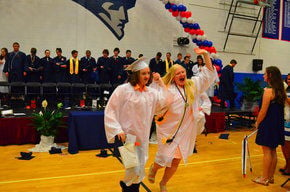 Haley Kelley, left, and Leanza Hunt, dance their way into their new lives.

Haley Kelley, left, and Leanza Hunt, dance their way into their new lives.

BETHLEHEM, N.H. -- The Profile School class that taught the world the meaning of giving took center stage Friday to receive their diplomas and embark on their new lives.

For donating $8,000 to their principal in her time of need, the entire Class of 2015 was bestowed the school's Mellekas Award, which recognizes those students who put the needs of another above their own.

At the state level, the graduates received a proclamation from Gov. Maggie Hassan for demonstrating a "powerful spirit of generosity and caring," "changing the world for the better" and representing New Hampshire's tradition of giving back.

In May, in an effort to help pay her medical expenses, the class voted unanimously to donate their entire senior trip money to Profile School Principal Courtney Vashaw, who was recently diagnosed with a rare form of cancer.

For both recognitions, the class received a standing ovation from the hundreds in attendance.

The Mellekas Award was presented by Bill Mellekas in memory of his parents.

This year, there were 42 graduates who embodied that award, and to the class, Mellekas said, "On behalf of my parents, congratulations. You made the right decision again."

The governor's proclamation was read by class advisors Kristy Duris and Ann Eaton.

Duris, with much emotion, pointed out the selflessness the graduates demonstrated toward their principal and said to them, "This gift demonstrates how big your heart is. It's gigantic ... As you leave Profile School, hold on to this generous heart."

Vashaw, also with much emotion that brought tears to the eyes of many, said when teachers walk into a classroom their wish is to create not only literate students and good thinkers but good people.

"On May 26, these students showed they have the ability to embody everything we wish for in them," she said.

To the graduates Vashaw said, "In the blink of an eye, you went from students to teachers."

Like teachers, they saw a need and came up with a solution, she said.

"Because of you, the world, even if just for a moment, is a safer, gentler place," said Vashaw.

She said the graduates taught her to be gracious and humble and called the Class of 2015 "proof that there is still good in the world."

To the graduates, Vashaw sang the words from "Children Will Listen," the finale in the Broadway musical "Into the Woods."

Addressing the class one last time, she said, "You are my wish and I could not have asked for a better realization of that wish."

This year's honored guest was Profile School social studies teacher Josh Lawton, who said, "Two weeks ago, you as a class showed us, and the world, that you are ready to face the challenges of the rest of your lives with grace. For that, I applaud you. We all applaud you."

Lawton said there are 7 billion people in the world, and when one realizes his or her insignificance in the grand scheme of things, freedom opens up.

"When we realize that we are not really important we free ourselves from fear," he said. "Without fear, you have amazing power and can unleash the potential inside of yourselves ... When we realize we are nothing, then and only then, can we do anything."

Valedictorian Morgan Austin pointed out the wisdom in the book "All I Really Need To Know I Learned In Kindergarten."

"The simple things we learned when we were young can be applied to our lives now," said Austin. "Keep your knowledge, keep your experiences and keep your friendships."

Salutatorian Leanza Hunt thanked Profile staff, the class's advisors and the graduating class and their parents.

Hunt also thanked Vashaw and said, "If we ever needed anything at all, you wouldn't hesitate to do anything you could to help ... You have made a huge difference in all of our lives that none of us can repay you for."