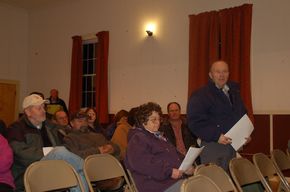 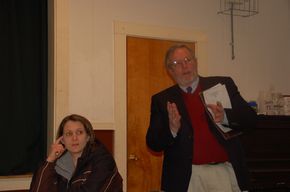 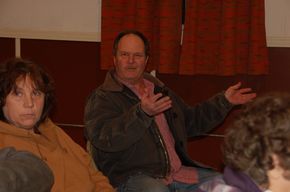 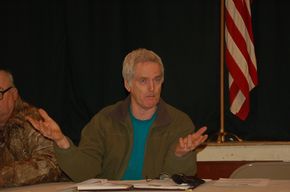 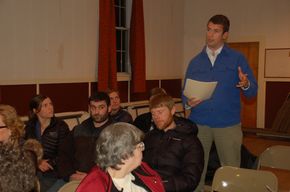 About 50 people turned out to hear town attorney Richard Saudek provide details about the annual payment from Massachusetts-based First Wind.

The meeting was called by the Sheffield Planning Commission to start discussion about how the town wants to see the money used -- some of that figure will be the tax bill which is ultimately assessed to First Wind.

The wind farm's turbines started up Oct. 19 and the town is poised to receive a locked-in minimum of $520,000 a year for the 20-year life of the project, longer if it operates longer, according to Saudek.

"A value of the wind project will be added to the Sheffield Grand List," he said. "The higher it is, the less will be paid by other Sheffield property owners. The value will be calculated on annual operating income. This year, the components of that number will have to be estimated because we won't have a full year's actual experience.

"In future years, we will use actual numbers," Saudek said.

The discussion centered in part about how much to use for the present day and what for, and how much to possibly invest for the town's future.

According to Saudek, the town already has taken in the first of the supplemental payments, in a check sent this month for $117,000. Another, in the same amount, is set to go into the town's coffers April 1.

A handful of First Wind representatives were at the meeting, both employees who came in from out of state to answer questions and a trio of employees who actually work at the wind farm site.

Much of the more heated parts of the debate among residents centered on a tug between those wanting much or all of the money to be applied to lowering taxes and those cautioning against using the money all up in present-day spending.

Sheffield Planning Commission member Norma Williams said she was nervous about that, and a whole generation becoming used to, potentially, almost no town budget taxes then suddenly having to cope with the taxes "going crazy" one day.

Saudek told residents that the 40-megawatt wind farm's payments to the town are guaranteed outside of an act of God such as a hurricane or lightning, "due to forces beyond anyone's control."

"In that case, the payments might be reduced but there is a floor of $400,000 in any event on those payments," he stated.

The amount of money in supplemental payments the town will get is based on a formula connected to the "amount of power they turn out," said Saudek.

"The citizens of that town vote to set up reserve funds or a fund or different funds and they vote on the purposes to which that money will be put," he said. "It can be simply a savings fund for a rainy day."

Or a capital fund can be created for more specific projects, such as building needs.

"This is obviously up to you, but I would imagine you may be asked to vote at town meeting this year on the possibility of setting up these reserve funds. Although they are administered and kind of held in trust by the select board, the uses of those funds are specified by the voters of the town. So the select board is obligated to use them only for the uses they are specified for," he said.

"The other thing that this money can go toward, it can go toward town expenses, thereby reducing the property tax rate," he said.

Planner Dennis Newland said, "I'm a pretty simple minded person and to me, it would only makes sense for me at town meeting to vote on the money we have, not the money we're going to be getting -- to me, that's the only money we should be voting on is that $117,000 -- we've got it in the bank, let's vote on what to do with it."

Alan Robertson said, "This is a once-in-a-life opportunity in this town's history to get the goose that lays golden eggs."

Sheffield Town Clerk Kathy Newland said the town had gone through "a seven-year process, and a hard process, and I think we're over that hump now, and I think people in this town really need to see some tax relief. I would strongly recommend that we put a good share of that money into the general and the highway fund and see our tax rate drop a little bit."

"One of the big selling points [for the wind farm] was tax relief, and the economy is really tough right now. Is this something we can vote on every year?" she asked. Saudek said it is.

"As the taxpayers, we have to pay and pay and pay," resident Kevin Bryant said. "I hope that somewhere there is going to be enough decency to think about the people who have no money."

First Wind's Josh Bagnato handed out a fact sheet and spoke about a $3,000 scholarship and a snowmobile ride-in at the wind farm set for noon March 3.

"We want to get to know folks a little bit better in the community," Bagnato said.

AP: Some stolen US military guns used in violent crimes

Pulling a pistol from his waistband, the young man spun his human shield toward police. Read more

Want a job? Employers say: Talk to the computer

A day after her interview for a part-time job at Target last year, Dana Anthony got an email informing her she didn't make the cut. Read more

Jury deciding if immigration detainees must get minimum wage

SEATTLE (AP) — A federal jury is deciding whether one of the nation's biggest private prison companies must pay minimum wage — instead of $1 a day — to immigration detainees who perform tasks like cooking and cleaning at its jail in Washington state. Read more

MUNICH (AP) — Several spectators were treated in the hospital for injuries caused by a protestor who parachuted into the stadium before France played Germany at the European Championship, UEFA said Tuesday. Read more

PHOENIX (AP) — A judge has approved a $15 million settlement against a doctor in a lawsuit by the parents of an incapacitated woman who was sexually assaulted and later gave birth at a Phoenix long-term care center, marking the last of several deals to resolve legal claims over the rape. Read more

WASHINGTON (AP) — The Navy never had to look too hard to fill its elite SEAL force. For years, eager recruits poured in to try out for naval special warfare teams — but they were overwhelmingly white. Read more

Media consumers may be reaching limit of streaming services

A British research company may have discovered a magic number for American media consumers — and it's seven. Read more

Shelby Houlihan, the American record holder in the 1,500 and 5,000 meters, was banned for four years after failing to prove that tainted pork caused her positive test for an anabolic steroid, sport's highest court said Tuesday. Read more

WASHINGTON (AP) — The Biden administration says it will enhance its analysis of threats from domestic terrorists, including the sharing of intelligence within law enforcement agencies, and will work with tech companies to eliminate terrorist content online as part of a nationwide strategy to… Read more

Record rise in US wholesale prices over the past year

WASHINGTON (AP) — Wholesale prices, driven by rising food costs, increased 0.8% in May and by a unprecedented amount over the past year as the U.S. economy emerges from pandemic lockdowns and pushes inflation higher. Read more

May retail sales fell 1.3% as Americans spend less on goods

NEW YORK (AP) — Retail sales fell in May, dragged down by a decline in auto sales and a shift by Americans to spend more on vacations and other services instead of goods. Read more