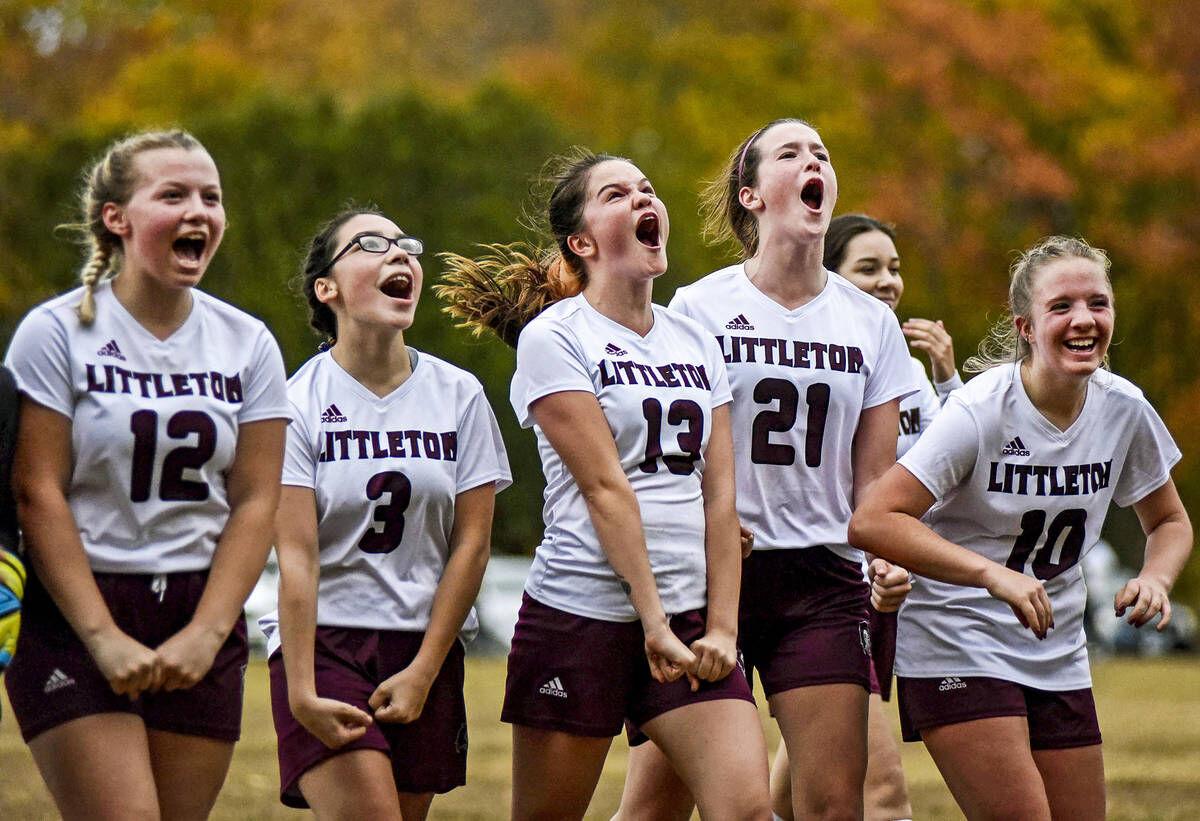 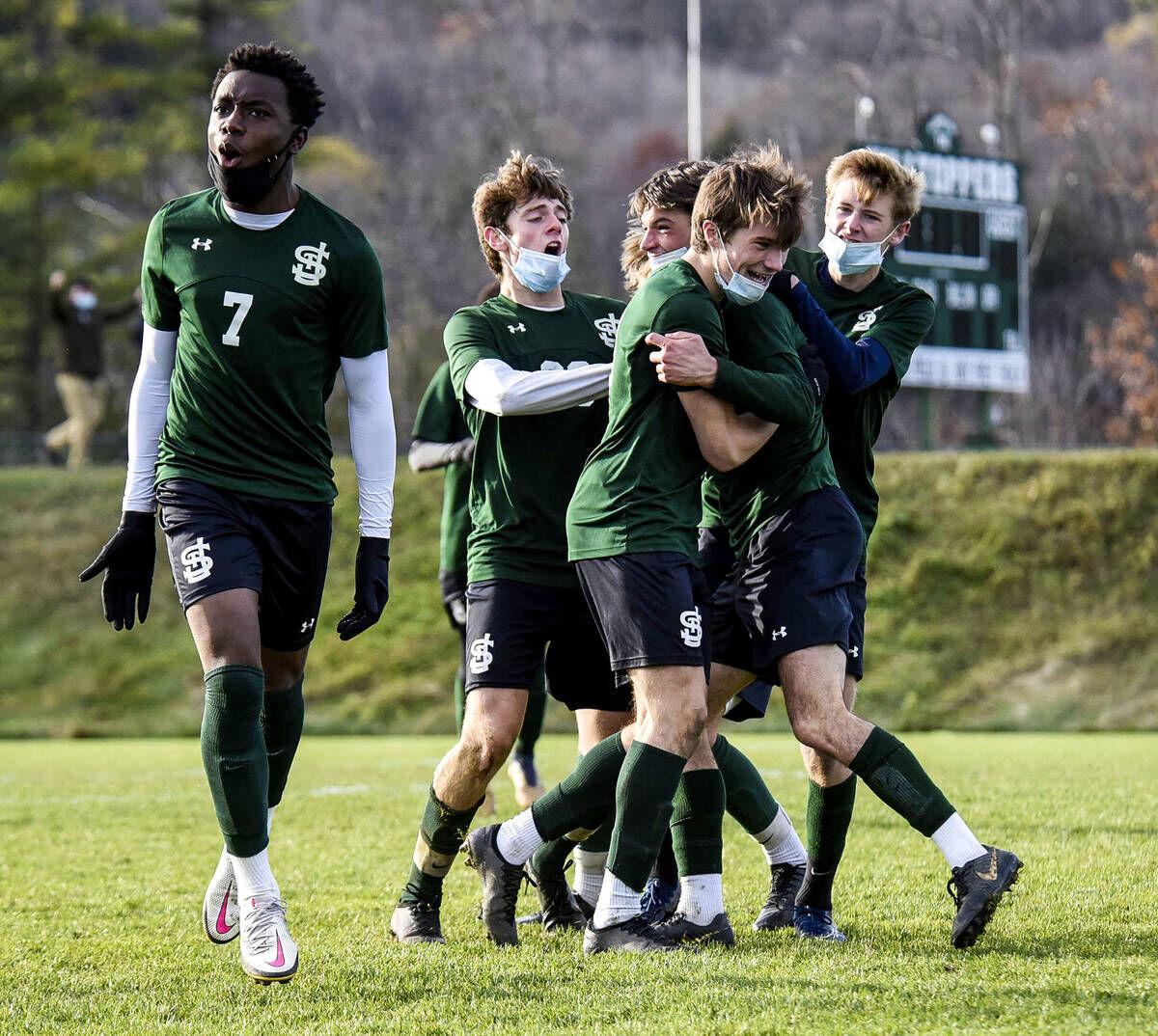 Top-seeded St. J takes down No. 8 South Burlington 3-2 in a Division I quarterfinal at Cary Field on Friday, Oct. 30, 2020. Robert Wood, Gardner Auchincloss and Denzel Ebohon all scored for St. J, the latter hitting the go-ahead tally with 18 minutes left to lift the Hilltoppers. The Academy will face the Burlington-Burr and Burton winner in Tuesday's semifinals. (Photo by Michael Beniash) 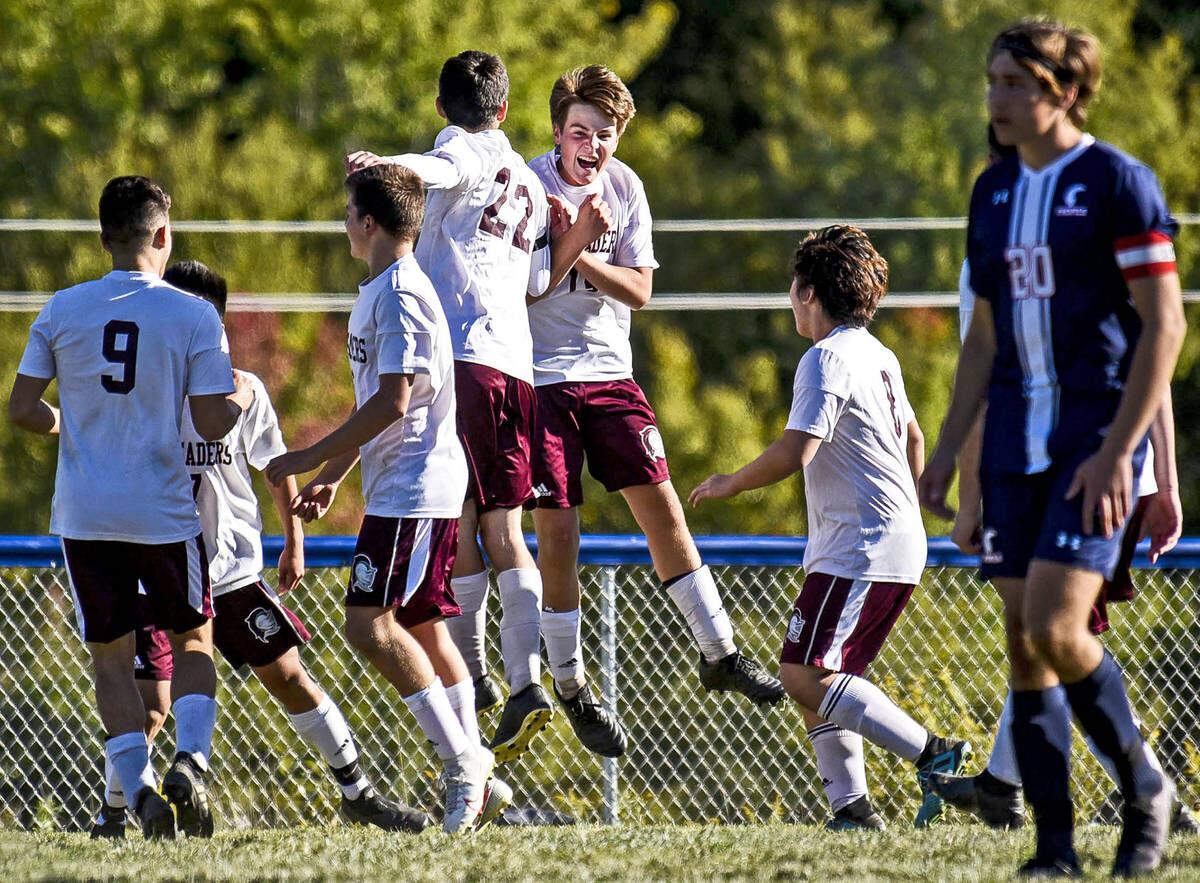 Littleton's Grady Millen celebrates with Landon Bromley (22) and other teammates after his go-ahead goal in the second half of the Crusaders' 2-1 win over Profile to open the 2020 soccer regular season on Friday, Sept. 18, 2020. (Photo by Michael Beniash) 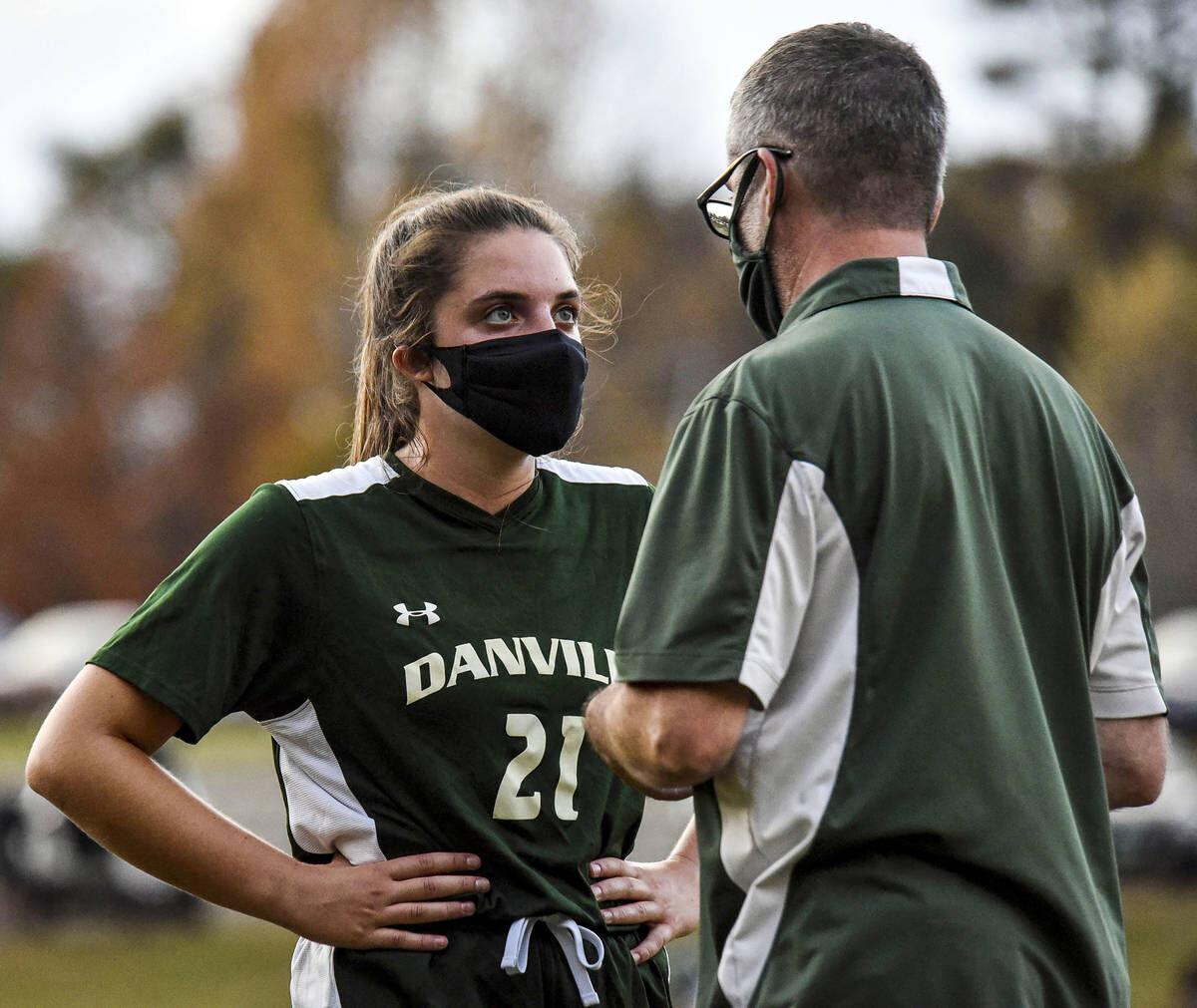 Top-seeded St. J takes down No. 8 South Burlington 3-2 in a Division I quarterfinal at Cary Field on Friday, Oct. 30, 2020. Robert Wood, Gardner Auchincloss and Denzel Ebohon all scored for St. J, the latter hitting the go-ahead tally with 18 minutes left to lift the Hilltoppers. The Academy will face the Burlington-Burr and Burton winner in Tuesday's semifinals. (Photo by Michael Beniash)

Littleton's Grady Millen celebrates with Landon Bromley (22) and other teammates after his go-ahead goal in the second half of the Crusaders' 2-1 win over Profile to open the 2020 soccer regular season on Friday, Sept. 18, 2020. (Photo by Michael Beniash)

A handful of area teams will take aim in high school soccer semifinals over the next couple of days. Tuesday’s snow cover tweaked the schedule a bit, but four boys teams go to battle on Wednesday and three girls squads play Thursday.

Wednesday, the upstart Division II Rangers visit No. 6 Montpelier under the lights at 5 p.m. In D-I, No. 1 St. J hosts No. 5 Burlington at 2 p.m. And in New Hampshire, Profile hosts Littleton at 2:30.

On Thursday, Hazen travels to Danville for a D-IV rubber match at 2 p.m., while undefeated Littleton takes a long road trip to Moultonborough in a N.H. D-IV final four tilt.

A quick glance at the local matchups:

UPDATE: St. Johnsbury Academy Headmaster Sharon Howell announced late Tuesday evening that all athletics were suspended following a second positive COVID-19 test within the school community. On Wednesday it was said the Burlington-St. J game will not be played, but will be rescheduled for Thursday.

It’s been a short, but wild season thus far for St. J. The Hilltoppers didn’t play their typical challenging Metro schedule because of travel restrictions, but went 5-0 in a condensed regular season, got the top seed in Division I, had a first-round bye, then outlasted No. 8 South Burlington 3-2 in the quarterfinals.

Now, despite plenty of roster turnover, they’re in their third semifinal in four seasons. And still being overlooked outside of the NEK.

“We’re really excited to play Burlington area teams,” said St. J senior captain Tommy Zschau. “I think our win over South Burlington has given us a much-needed confidence boost. All those teams have counted us out this season and we all really want to prove them wrong. I think that we definitely have the ability to beat Burlington if we force them to play our style and keep our composure throughout the game.”

Burlington and St. J did not meet this season. The Seahorses handled Mt. Anthony in the first round and Burr and Burton 3-0 in the QFs. In the regular season, Burlington tied South Burlington 1-1 and lost 4-3.

“Burlington is a tough team,” Hilltopper coach Stephen Levesque said. “They have a tough forward in Jake Manley and one of the best defenders in Sam Hogg. They are dangerous and we will need to play a full 80 minutes. We can’t have defensive lapses like with did against South Burlington. We have to stay mentally focused the entire game.”

Liam Laidlaw leads the Hilltoppers with six goals while Gardner Auchincloss has five, including a goal and an assist in the quarterfinal win.

“I think everyone on this team truly enjoys playing with each other and trusts that everyone will do their job,” Zschau said. “I think that trust has allowed us to play very well in close games. We also all really want to win.”

No. 3 Essex and No. 2 Champlain Valley meet in the other semifinal.

The Rangers finished the regular season at the bottom of the D-II standings. Now, they can’t be topped.

And the 15th-seeded Rangers hope to stay there.

Fresh off their second upset in four days last week, LRU takes aim at another Capital Division power in No. 6 Montpelier.

The two teams did not meet this year.

Lake Region knocked eight-time defending champion Stowe 1-0 last Tuesday, then pulled off 1-0 triumph at No. 7 U-32 on Friday. The Rangers are back in the semifinals for the first time since 2018 after winning back-to-back titles in 2017 and ‘18.

“We know that Montpelier is an incredibly organized and well-coached team who is hard to break down,” said LR coach Malcolm Cheney. “They have a great back four and goalkeeper and are really strong through the middle of the field. They are strong, physical and really dangerous on set pieces and corners. We know that we have a lot of work to do in training to prepare for another tough and low-scoring game.”

Due to field conditions at Montpelier High School, the game will now by played on the turf at Burlington High School.

“We have to play hard on defense,” said junior goaltender Connor Ullrich, who owns back-to-back shutouts. “We might not have as many scoring options as them, but we’re going to fight.”

Montpelier knocked off No. 3 Harwood in penalty kicks in the quarterfinals. No. 4 Middlebury and No. 1 Milton square off in Wednesday’s other semifinal.

If their first two games were any indication, the Crusaders and Patriots will be in a dogfight for a ticket to the Division IV finals.

Littleton, playing in its fifth straight final four, beat Profile twice in the regular season — 2-1 in the season opener at Profile and 1-0 at home on Oct. 8.

“It’s going to take our best game of the year tomorrow,” LHS coach Luke Driscoll said. “Profile is a very good team and it’s always tough to beat a good team three times, but these boys are up for the challenge and looking forward to playing our rivals in a North Country final four. Good things will happen if we execute our game plan and play a full 80-plus minutes of soccer.”

With no seeds and a randomly-generated bracket in the open D-IV state tournament, the Crusaders came out of Region II with a 5-1 first-round win over Pittsburg-Canaan and then advanced out of the quarterfinals after Colebrook forfeited because of a COVID-19 outbreak in town. The Mohawks had beaten Littleton 3-2 in the regular-season finale.

Parker Paradice leads the Crusaders in goals and assists while goalkeeper Josh Finkle has five shutouts in 11 games. Landon Bromley and fellow seniors Stephan Lucas and Isaac Piette lead the defense while Austin Marquis and Kyle Huyhn control the midfield.

“We have 12 seniors, so for them to have this opportunity to play and compete as seniors is something many doubted back in August,” Driscoll said. “They understand we are fortunate to still be playing soccer into November. These boys have been very resilient all year, going above and beyond what’s been asked of them. I am very proud of this group for the way they have handled this unprecedented season.”

Max Ritter, one of the top players in the area, leads the Patriots in scoring. Profile came out of Region III with a pair of 3-0 shutouts over Moultonborough and Lin-Wood.

Pittsfield and Sunapee will meet on the other side of the bracket.

It’s a rubber match between rivals for a berth in the finals. That’s the setup as the Wildcats travel to Danville for a Thursday showdown. The clubs split during the regular season, Hazen prevailing 1-0 and the Indians notching a 3-2 victory.

Because of five inches of snow on the field Tuesday, the game will be played Thursday.

“It should be another good and close match,” said Hazen coach Harry Besett. “I think it will come down to who can control the midfield and win more 50/50 balls in the middle of the pitch. Between the two games we’ve each scored three goals against each other so we know we’re both dangerous. Both teams will be coming in confident and I expect both teams to create chances.

“If we can stay composed and take advantage of the chances we create, we’ll have a shot at playing in Manchester on Saturday.”

Senior forward/midfielder Macy Molleur leads the Wildcat attack with 13 goals and five assists. She had five goals and a pair of assists in two playoffs win last week, while classmate Madison Bartlett owns five goals and two assists this season.

Hazen is in its first final four since 2011.

For Danville, it finally broke through against Long Trail with a 2-0 win in the quarterfinals for its first final four berth since 2007. The Mountain Lions had eliminated the Indians the last five postseasons.

Both Rylie Cadieux and Macy Voganschneider scored for the Tribe in the quarterfinal victory while Ava Marshia had a hat trick in the first-round win over Craftsbury. Marshia is Danville’s leading scorer.

“After beating Danville in our last regular-season game I was hoping we wouldn’t see them again until the championship game, but we’re meeting in the semis instead,” Besett said. “I’m hoping whoever wins Thursday will go on to be champions to keep the trophy in the NEK!

No. 1 Proctor and No. 5 Rivendell square off in the other semifinal.

On the road again, this time for its longest trip of the postseason. Undefeated in the regular season, Littleton was randomly drawn to the No. 5 seed in its four-team region and have played three playoff road games en route to a road semifinal.

“I have not heard one complaint from this team about the road,” said LHS coach Clinton Brown. “They just want to play. We get to each field, look at the turf, review the field’s size, take some corners and say this field is going to play like XYZ, we are home again, let’s play. They adjust very well to what is thrown at them, that’s the fun part.”

LHS earned a 3-1 play-in win at Pittsburg-Canaan, a 6-0 first-round triumph at Gorham and a 8-0 drubbing at Groveton in the quarterfinals. The Crusaders have outscored their opponents 72-5.

Now they will take on a Panthers team that knocked off Woodsville 1-0 in the quarterfinals. Littleton, playing in their second straight final four, was the only team to beat the Engineers in the regular season.

“Moultonborough has a strong defense and a good goalie,” Brown said. “They have a little different style of play so our frontline and midfield will have to be patient.”

“Breathe, relax, have fun,” Brown said. “This so far has been working. Other players are starting to understand the game plan and I think we are peaking at the right time.”

No. 4 Sunapee and No. 1 Portsmouth Christian collide in the other final four matchup.