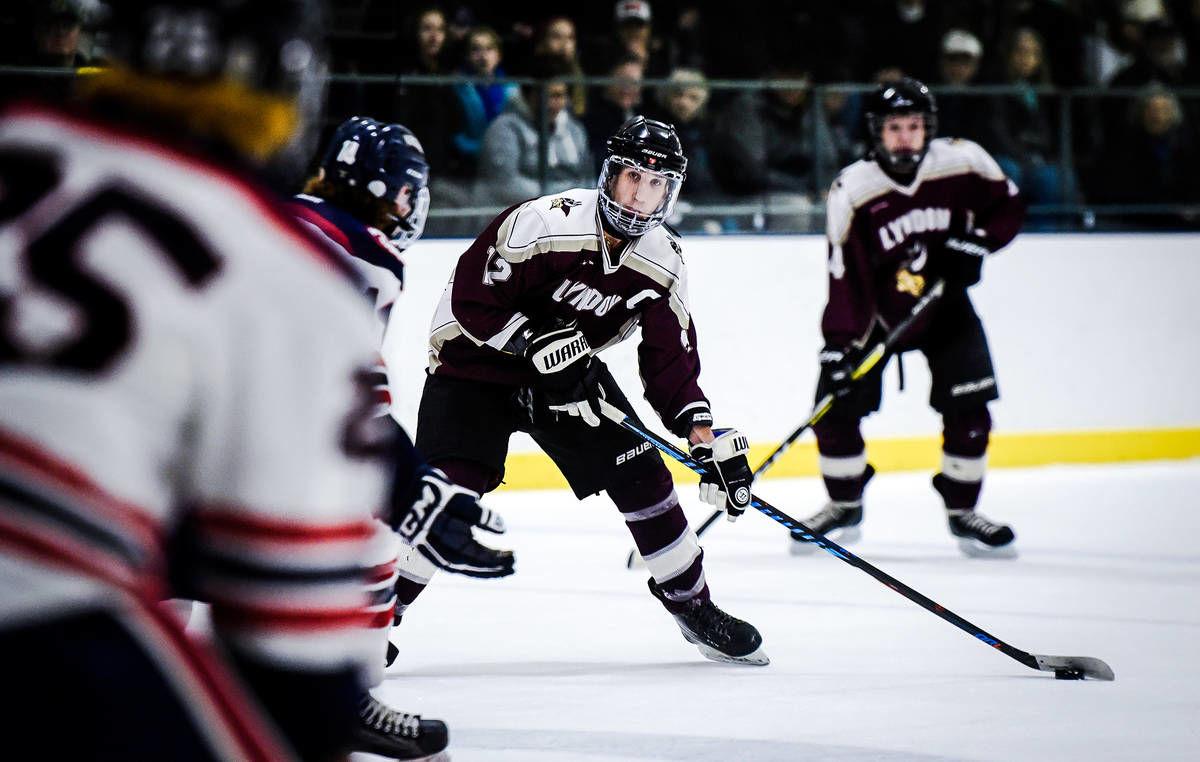 Lyndon center Martin Rudolf finished his senior season with 20 goals and 15 assists, was a Division II All-League first-team pick and reached 100 career points in three seasons. He is The Record’s Boys Hockey Player of the Year for a second straight season. (Photo by Paul Hayes) 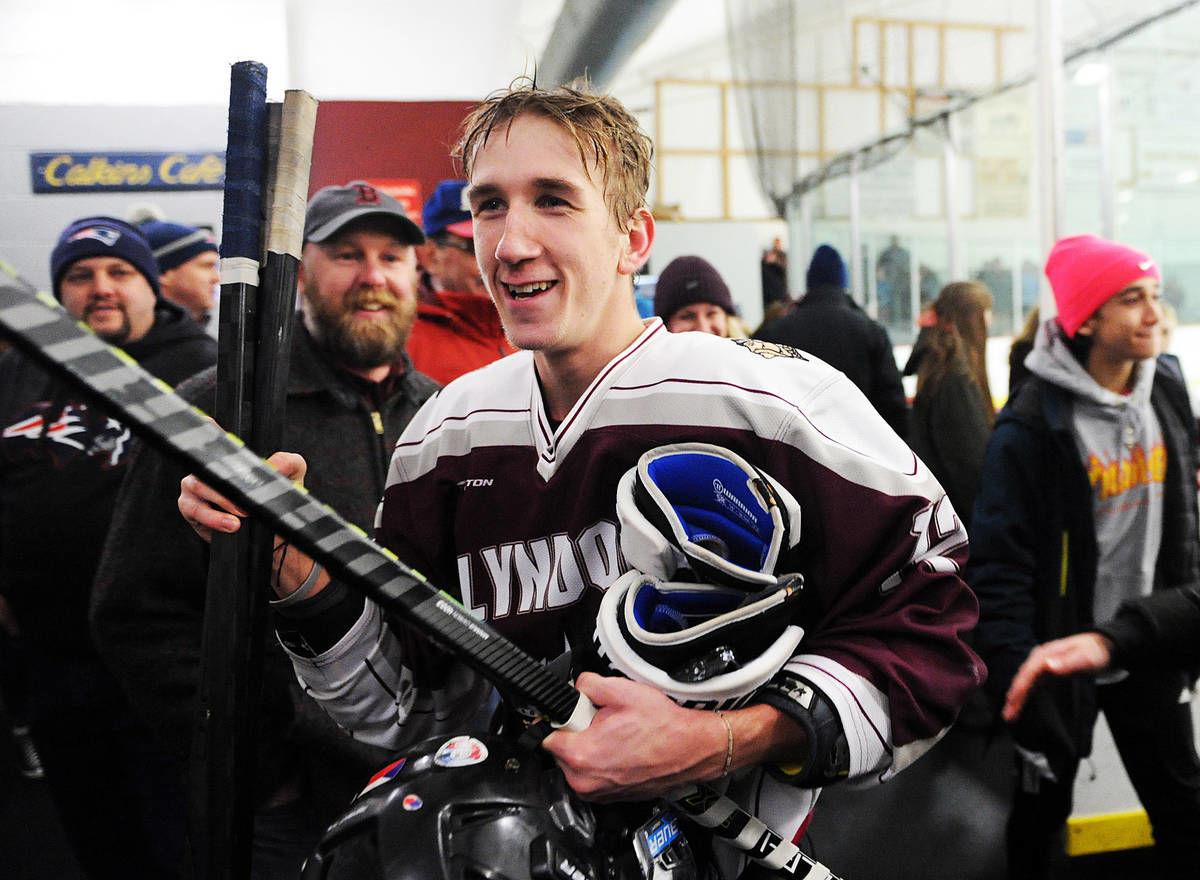 Martin Rudolf finished his career with 103 points on 57 goals and 46 assists. (Photo by Paul Hayes) 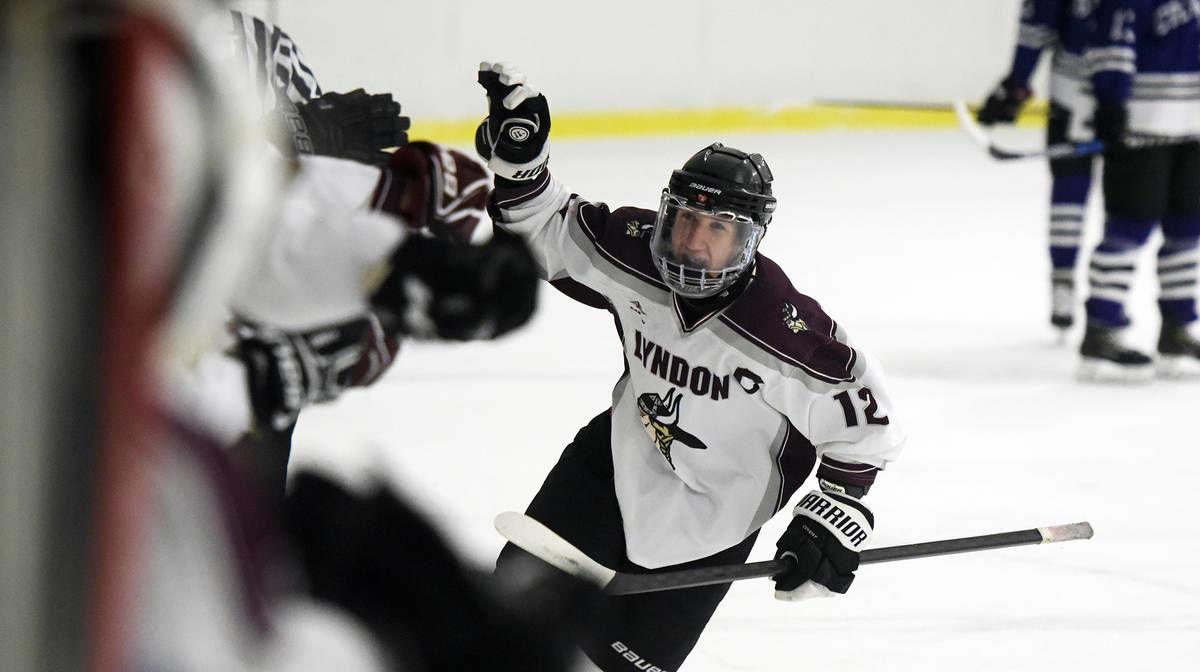 Martin Rudolf goes to the Vikings' bench after scoring a first-period goal as Lyndon Institute beat Brattleboro 3-2 in overtime in a Division II hockey showdown at Fenton Chester Arena in Lyndonville on Saturday, Jan. 25, 2020. (Photo by Paul Hayes) 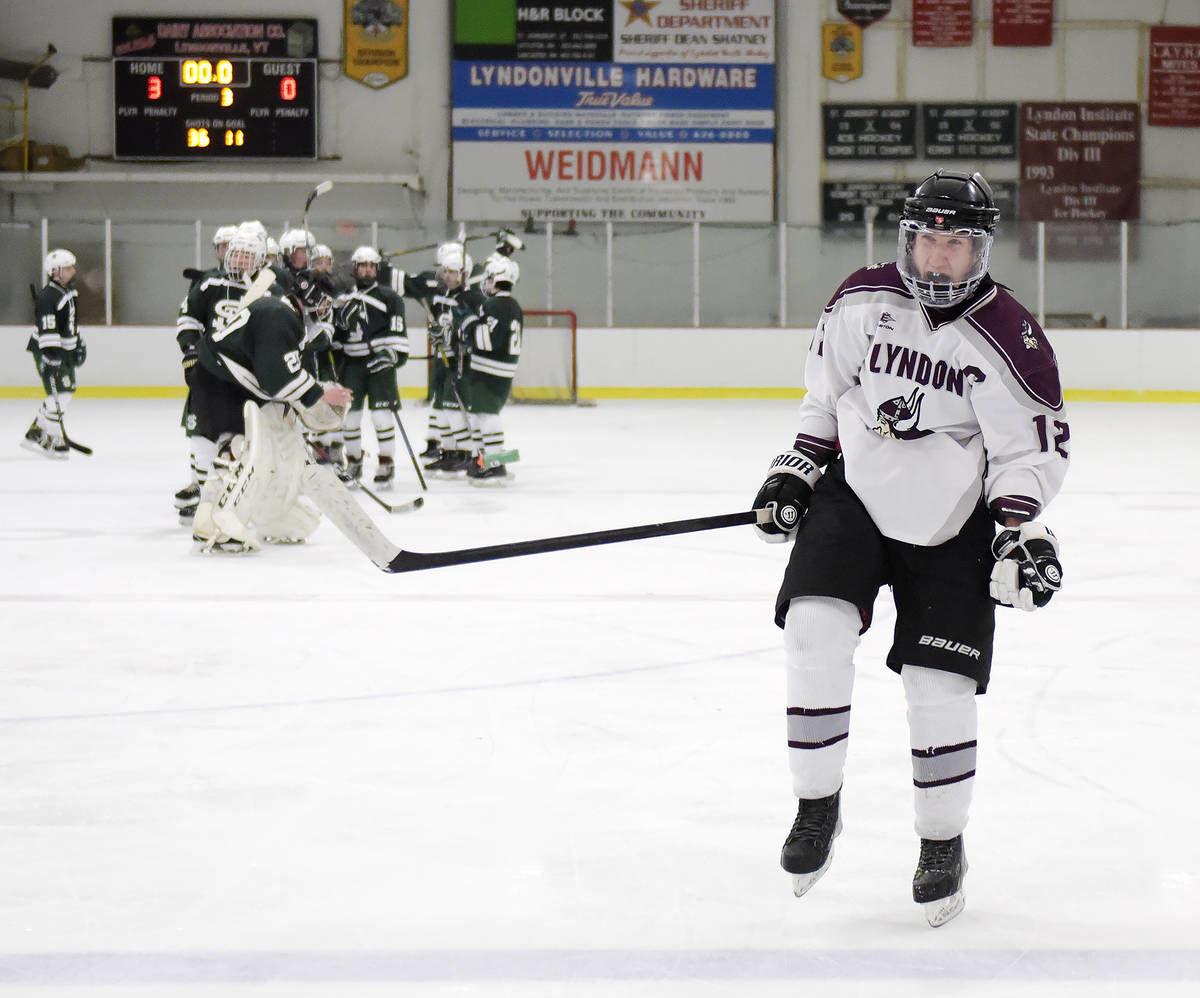 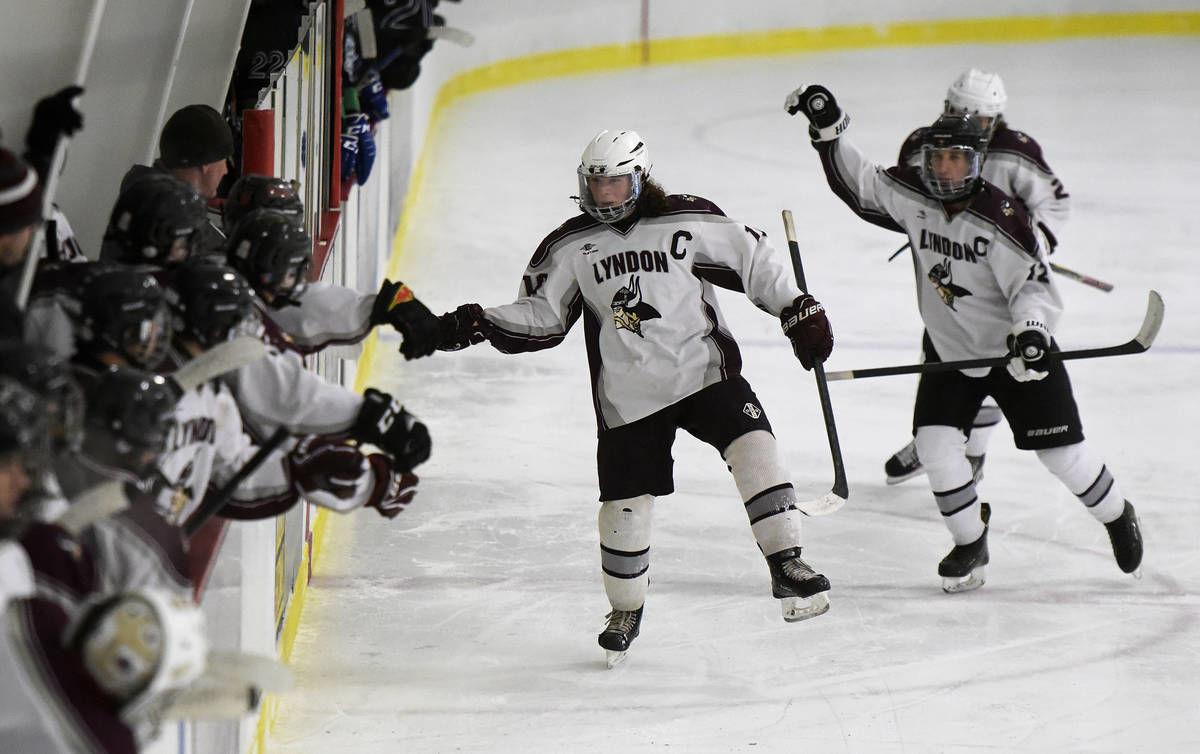 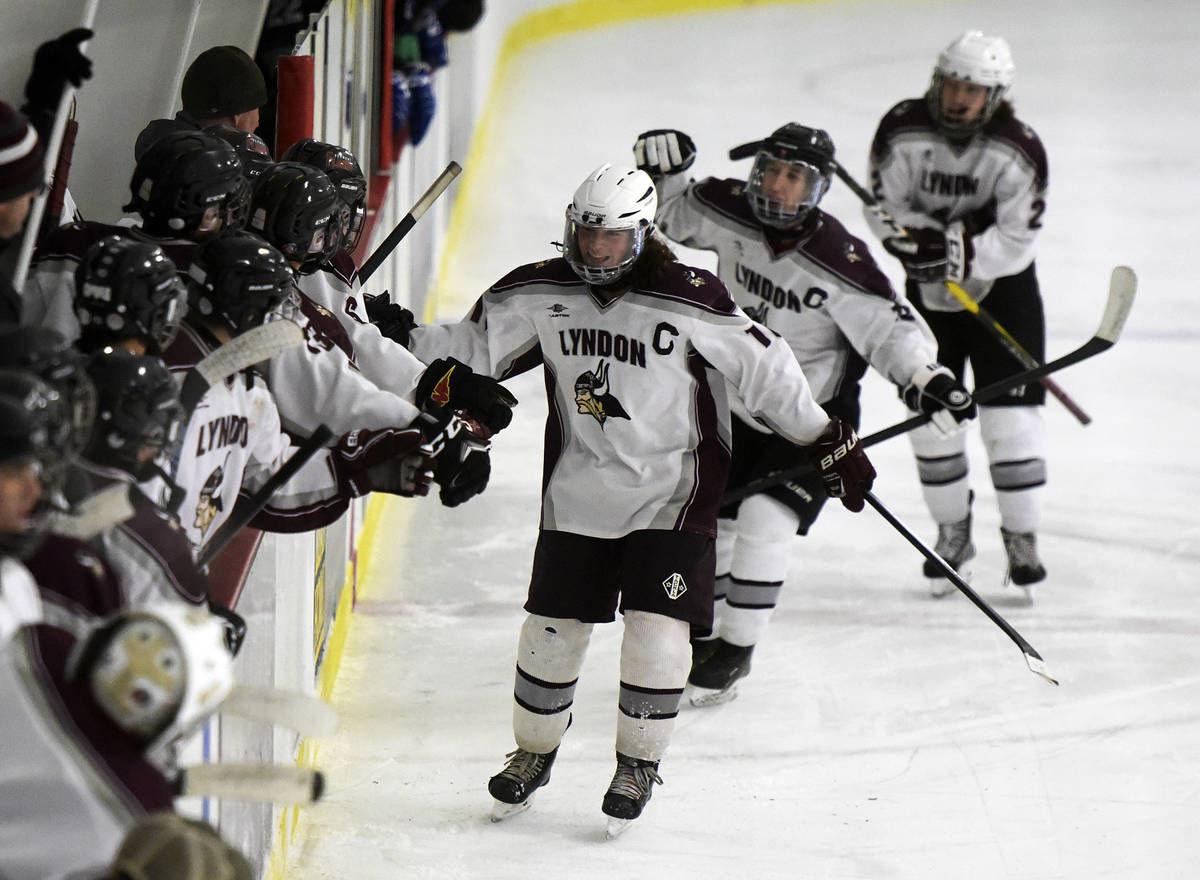 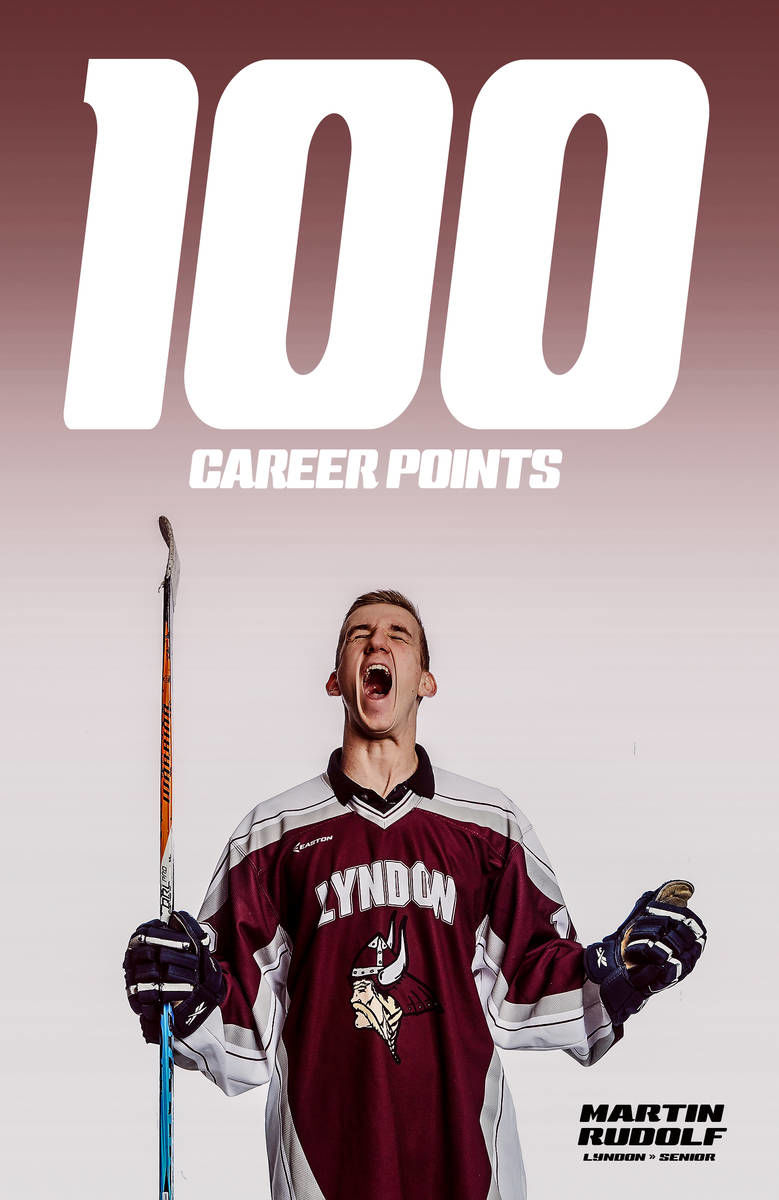 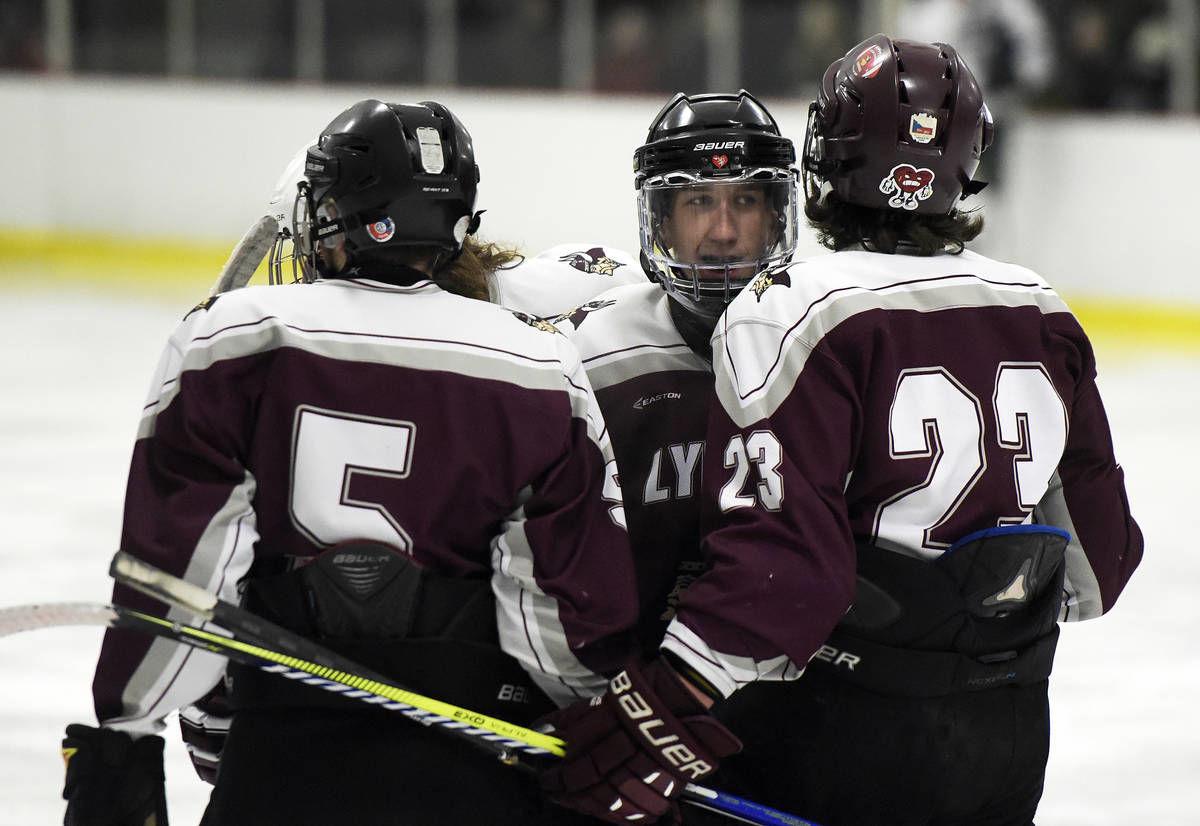 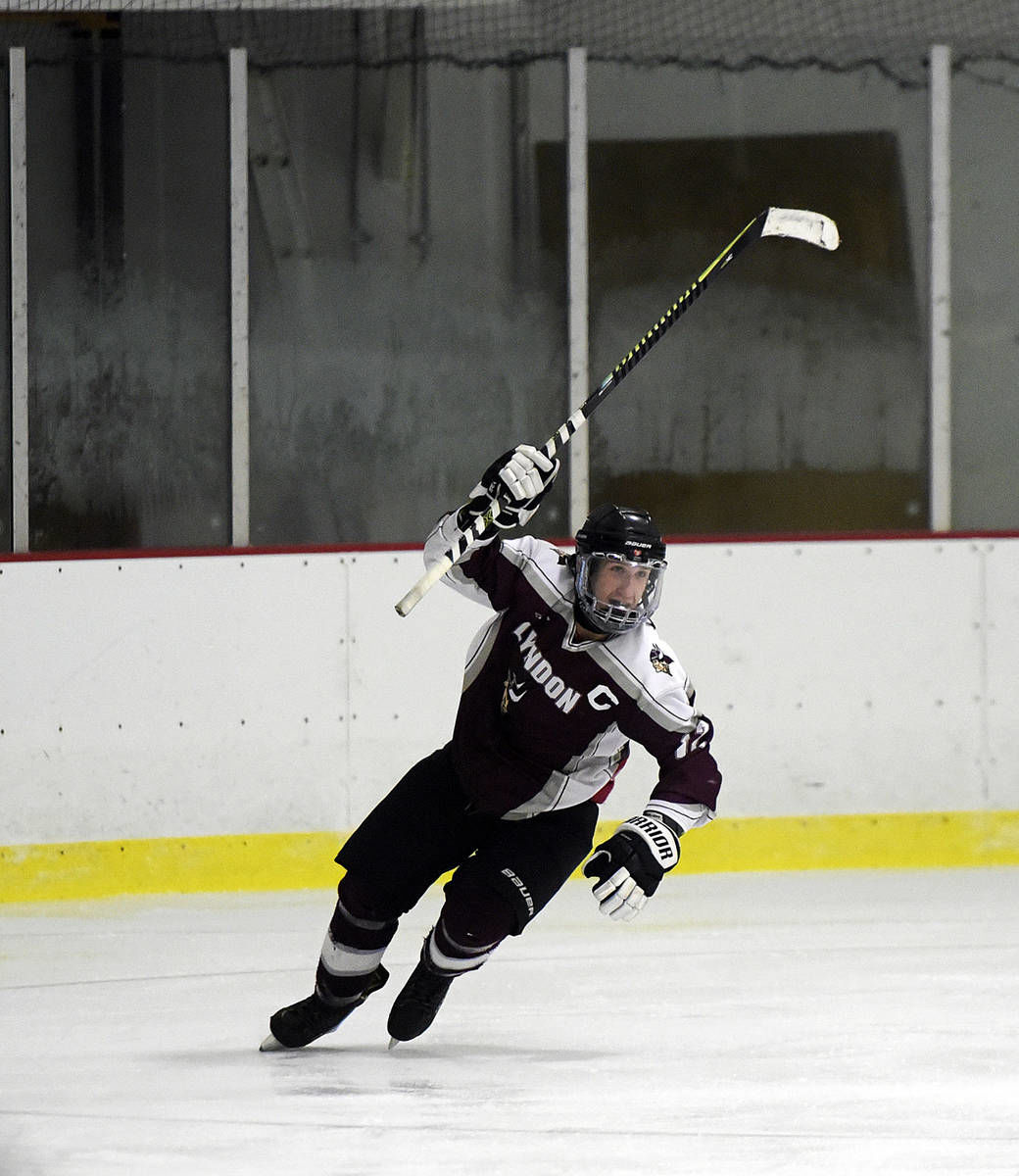 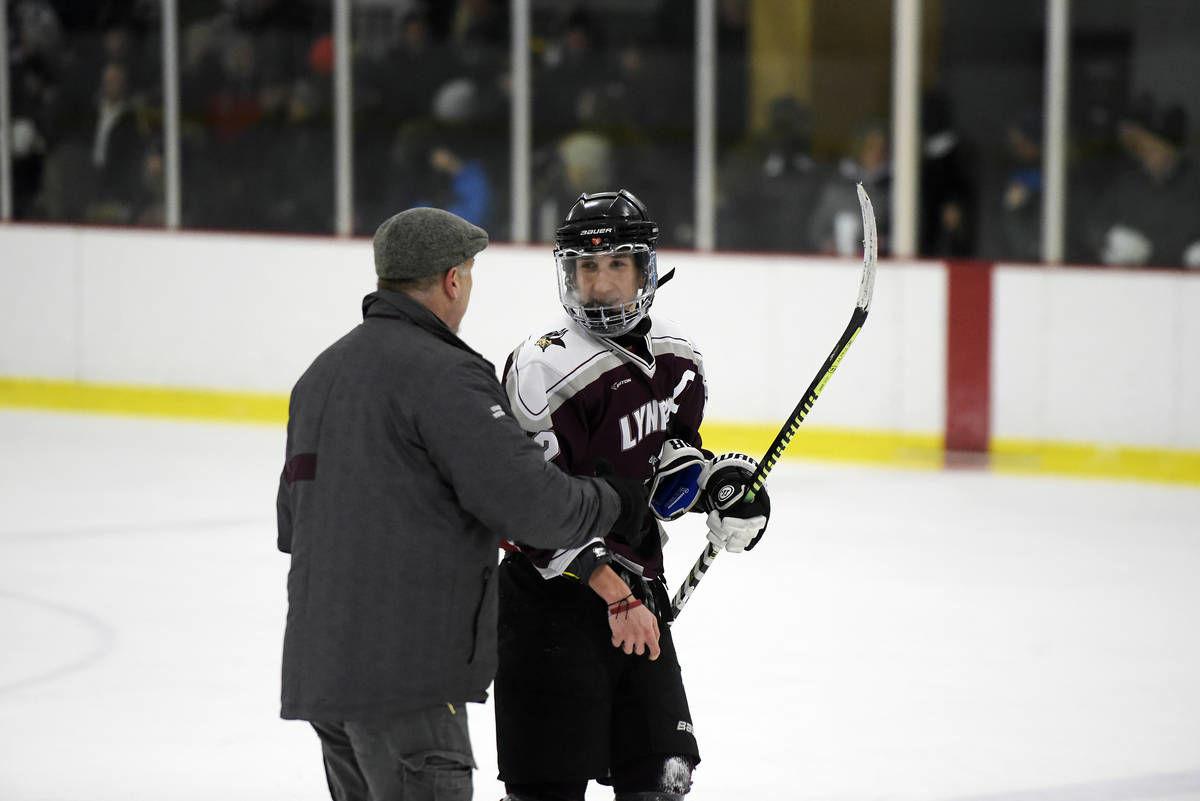 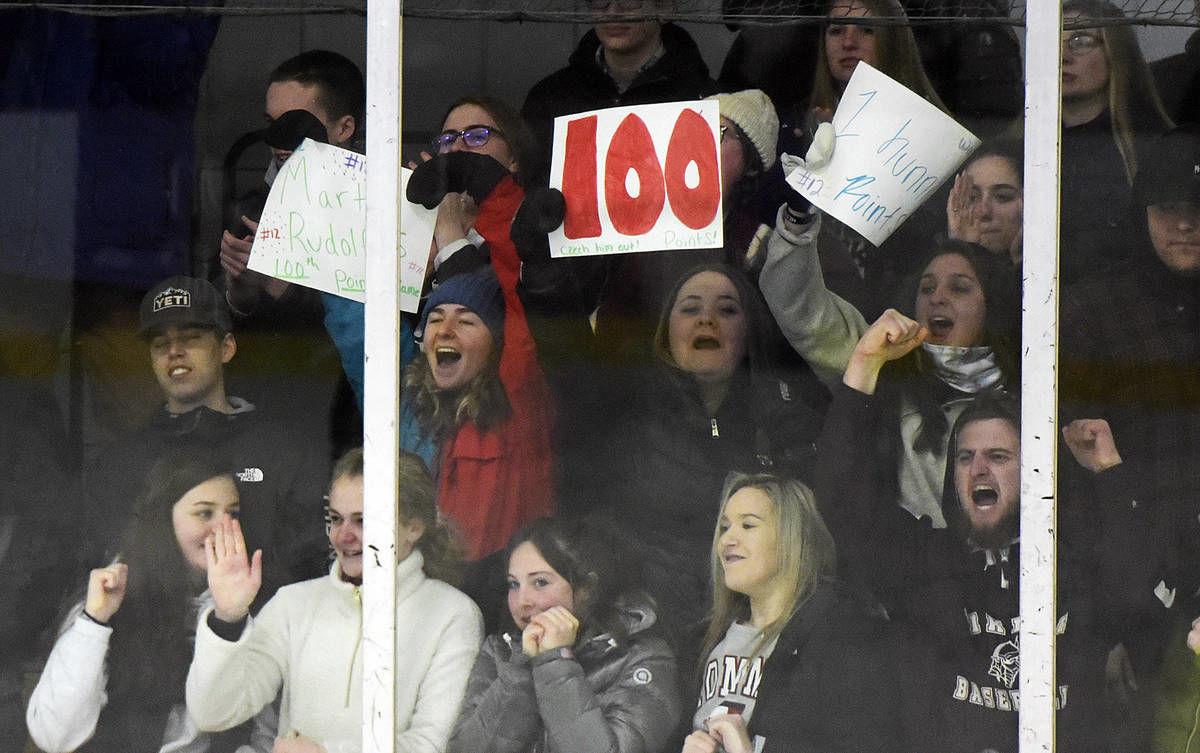 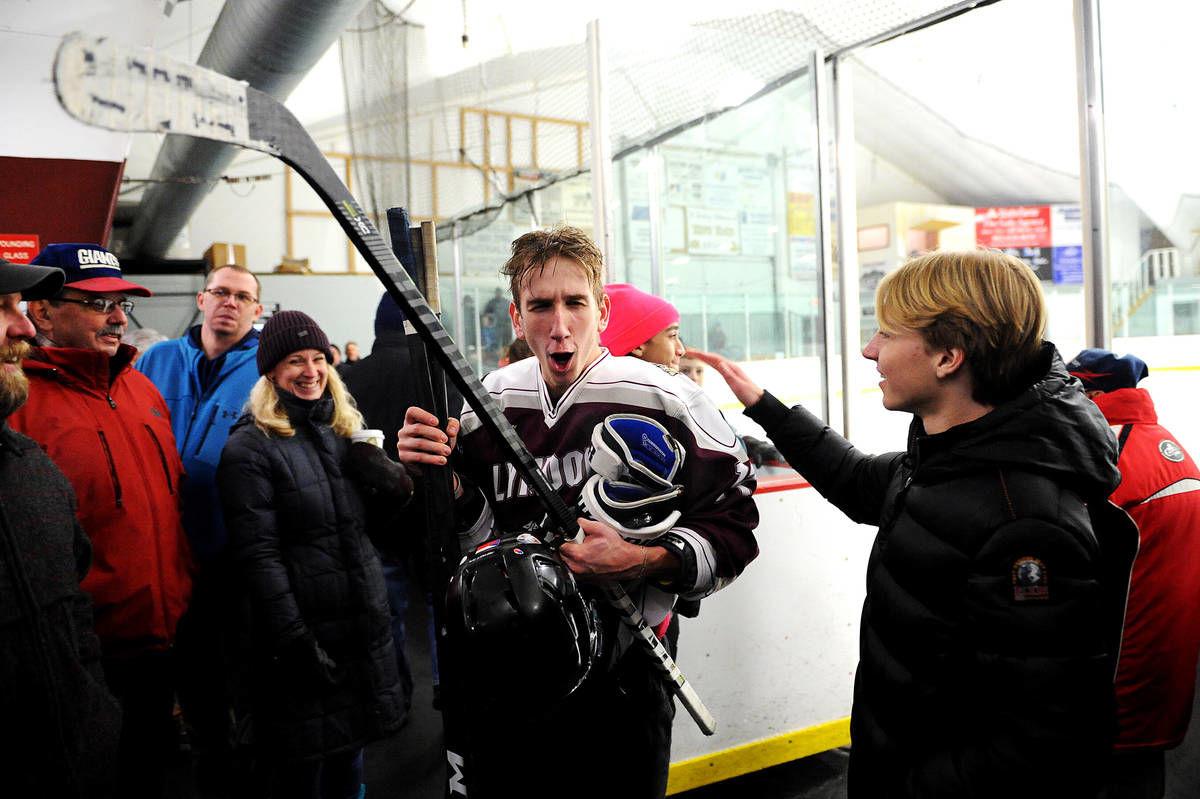 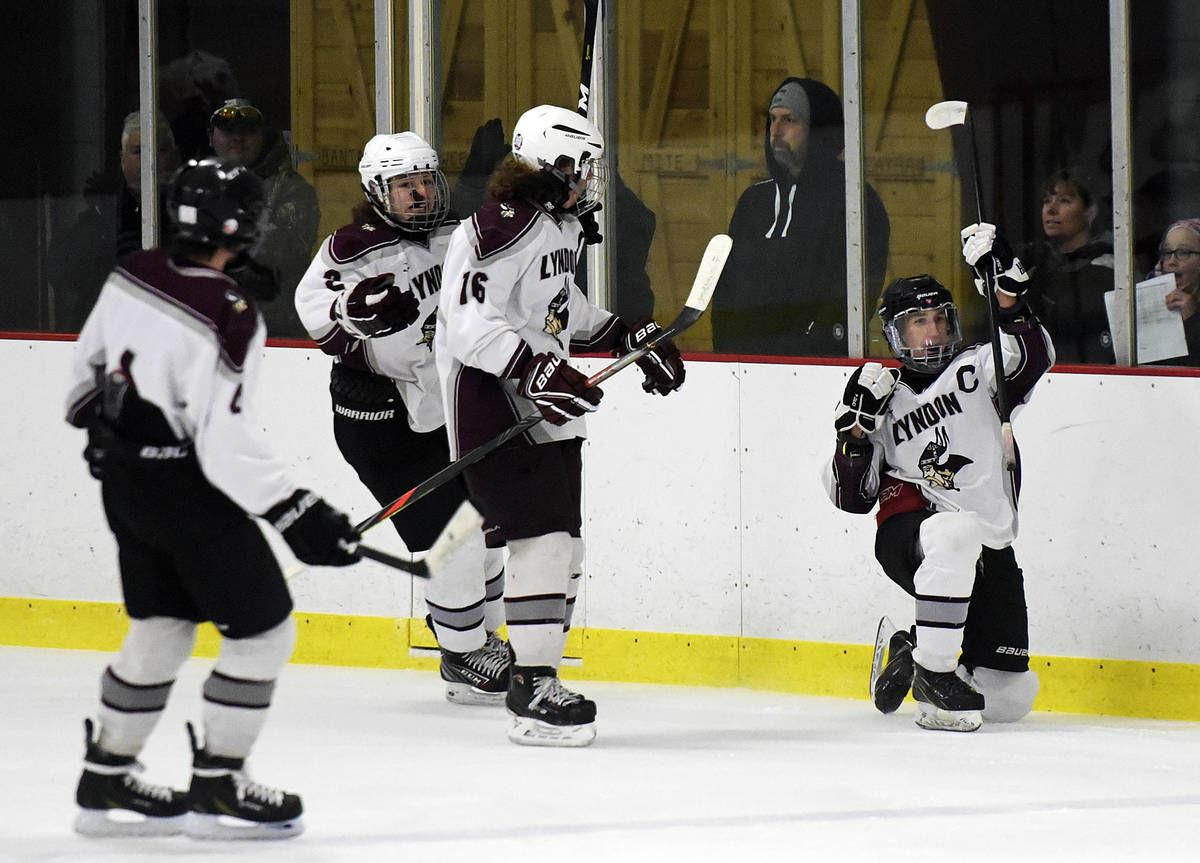 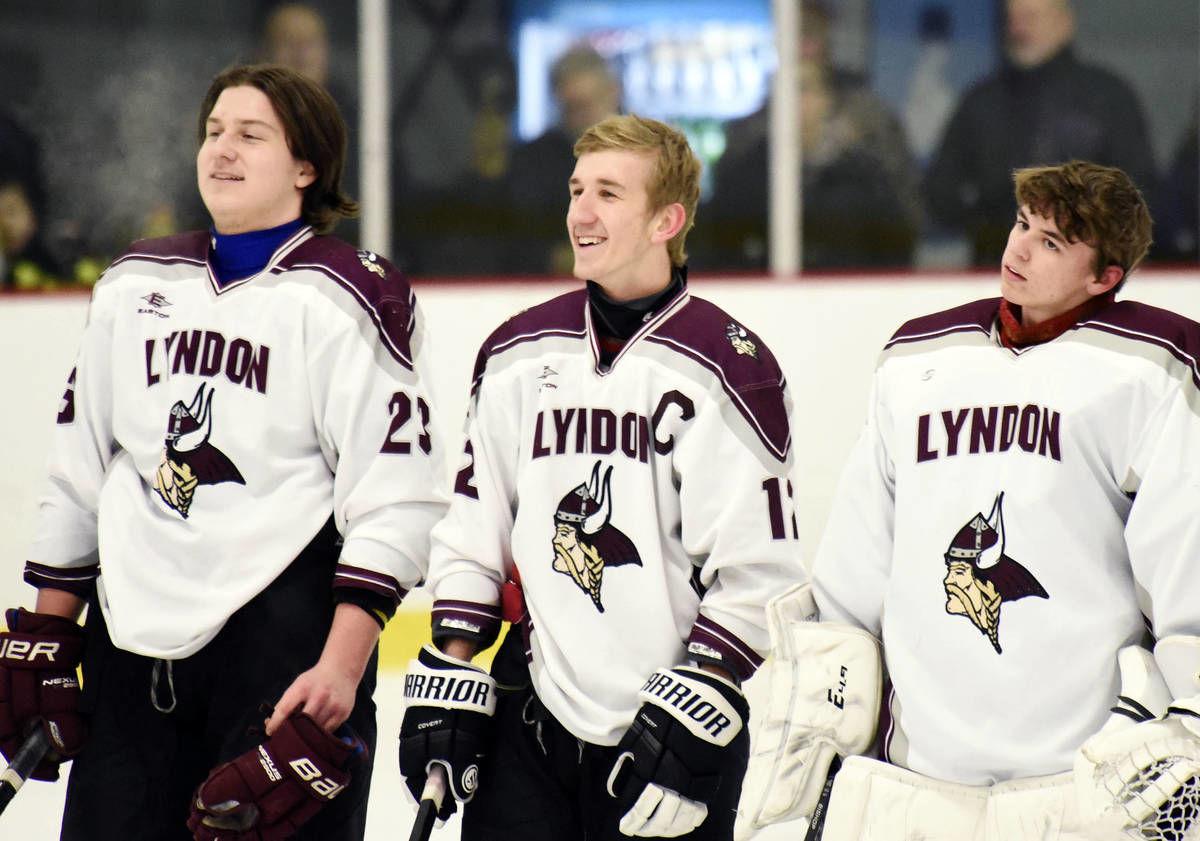 Lyndon center Martin Rudolf finished his senior season with 20 goals and 15 assists, was a Division II All-League first-team pick and reached 100 career points in three seasons. He is The Record’s Boys Hockey Player of the Year for a second straight season. (Photo by Paul Hayes)

Martin Rudolf finished his career with 103 points on 57 goals and 46 assists. (Photo by Paul Hayes)

Martin Rudolf goes to the Vikings' bench after scoring a first-period goal as Lyndon Institute beat Brattleboro 3-2 in overtime in a Division II hockey showdown at Fenton Chester Arena in Lyndonville on Saturday, Jan. 25, 2020. (Photo by Paul Hayes)

Martin Rudolf left Vermont for the Czech Republic a month ago.

He left his mark on Lyndon Institute hockey.

The 18-year-old center finished with 20 goals and 15 assists this winter, the last of his three stat-filled seasons in the Northeast Kingdom.

A native of Prague, Rudolf spearheaded a high-scoring Vikings team to a 14-7-1 record and a trip the Division II playoffs where their championship aspirations were cut short in a quarterfinal heartbreaker.

“It was a blessing to play with Martin,” said LI senior defenseman Duncan D’Olimpio. “He’s just a kid with so much raw talent. He’s the lightest kid, but he hits the hardest and has the hardest shot. He knows how to work. He’s just so much fun to watch.

“In practice when we go one-on-one, I am just completely amazed by the things he can do. His footwork on skates is like nothing I’ve ever seen.”

He was a great scorer, but matured into a dynamic playmaker.

“I love to score” Rudolf said. “But I like more giving a pass and seeing someone else score.”

Well, for the second straight winter, Rudolf scores our top prize: The Record’s 2019-20 Boys Hockey Player of the Year.

“Martin’s a great kid who has a really good outlook on things,” said third-year LI coach Chris Meunier. “He’s positive, uplifting and has a real passion for the game; a will to win.”

Rudolf keyed the most successful three-year stretch in Vikings’ history, helping the Vikes compile a 40-24-2 record with two final four appearances and a D-II runner-up finish in 2018. Lyndon this winter averaged four goals a game and tied the program record for regular-season wins (13, 1993).

“He has speed and agility,” Meunier said. “He’s a finesse player, but he was also physical. He wasn’t afraid to hit hard. He could rail a 200-pound guy as good as anybody. And he was tough, playing through injuries to help his team.

“He was very well respected by his teammates and coaching staff.”

The Vikings won eight straight games during the middle of the season, from Dec. 28 to Jan. 25, including handing state-champion Harwood its first loss of the season, 7-6 on Jan. 18. The Vikings ran off 11 wins in 12 games before going 0-2-1 in the final three regular-season games.

Rudolf had two goals and an assist in No. 5 Lyndon’s 8-1 first-round playoff win over No. 12 Northfield before the Vikings’ season ended abruptly in a quarterfinal thriller at No. 4 Hartford — a Hurricanes’ goal with 75 seconds left ending LI’s season in a 2-1 loss.

“It always has to end somewhere,” Rudolf said. “We tried our hardest, tried our best to win. It just wasn’t our year.”

On Feb. 26, in the final regular-season game of the season, Rudolf made history. Early in the second period, Rudolf cut across the crease and went backhand top shelf for his milestone 100th career point at LI.

The first Viking to reach triple-digits in recent memory, Rudolf joined the likes of former standouts Fred Pogmore (2000, all-time leading scorer who had 140-150 points in three seasons), Travis Berman, Billy Hayes and Brian Herrity, among others.

“When I scored my 100th point, Jacob Montgomery’s mom was there with a sign written in Czech that read Congratulations. That was really cool. Everyone was so excited for me to get it. That was a good memory.”

Rudolf’s time in Lyndonville was cut short because of the COVID-19 pandemic. He was forced to return home to Czech Republic a month ago, missing out on his final few months of high school.

“It was so sad when it all ended,” he said. “It was so emotional. I didn’t want to leave the boys.”

Now he’s back in Prague, staying at home, shooting pucks in his backyard.

“It getting a little boring at home,” he said. “But it is what it is.”

In the meantime, Rudolf will be waiting and preparing. He hopes to get a new Visa, return to the Unites States and continue his hockey career with the Springfield Pics, an American junior ice hockey organization playing out of Springfield, Massachusetts.

“I definitely want to stay in America,” he said. “If I didn’t have family in Czech, I wouldn’t want to stay here.”

Playing for Lyndon was a special experience.

“I wish we won the championship, but there isn’t a thing I would change,” Rudolf said. “I loved the season. I loved my time at LI.”

How would you grade your season as an individual: A-minus, I think we could’ve went all the way.

What are you looking to get better at in the offseason: I gotta gain some weight and some muscle. And work on my hands more too.

Who was the toughest competitor you faced this season: You never know what to expect from any team or anyone on that team.

Who inspires you in hockey and why: Alex Ovechkin, his hard slapshot and his speed, and Patrick Kane, he is just such a good player and I love his moves.

What’s your favorite move: Fake shot and go to backhand and/or back to forehand.

What are you doing to pass the time now that in-school instruction is canceled: My dad built me a shooting range in my backyard so I go there and stickhandle and shoot a lot.

What are you doing currently to stay prepared physically: I try to get my legs moving on a ladder and I should probably start working out too, haha.

Which Lyndon player wins a skills competition: It depends what kind of skill. Patrick Gaudreau would be for speed. Dzamal Benda for hardest shot. And I could say me or Duncan D’Olimpio for stickhandling.

What’s the best advice you can give to young athletes: Don’t ever let anyone tell you you can’t do something.

Where do you see yourself in five years: Well I hope in the NHL and if not hopefully somewhere else playing hockey.

The Record’s Boys Hockey Players of the Year

Tommy Zschau strung together a pair of blistering slalom runs at Smugglers’ Notch in early January.