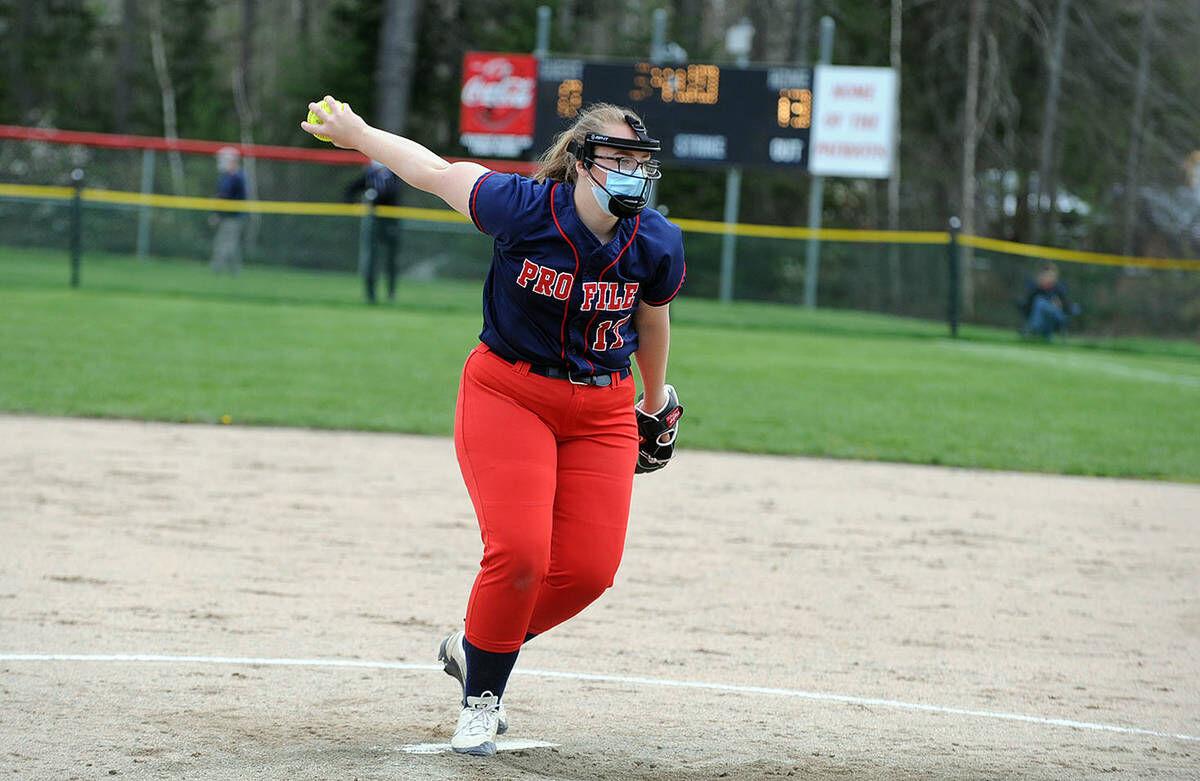 Alexis Sellers struck out six in five innings as Profile toppled Littleton 17-1 on Monday, May 11, 2021. (Photo by Arlene Allin) 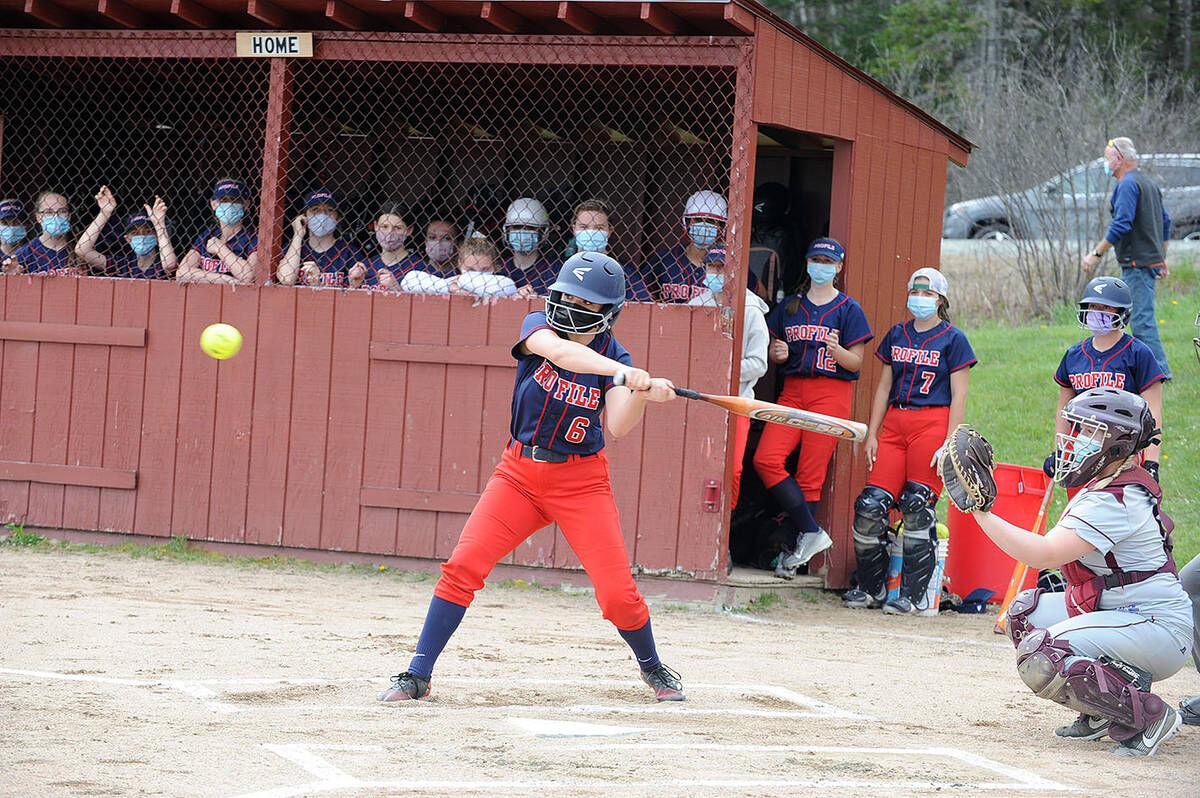 Zoe Liva smacked a couple hits and scored three runs in Profile's 17-1 victory over Littleton on Monday, May 10, 2021. (Photo by Arlene Allin)

Alexis Sellers struck out six in five innings as Profile toppled Littleton 17-1 on Monday, May 11, 2021. (Photo by Arlene Allin)

Zoe Liva smacked a couple hits and scored three runs in Profile's 17-1 victory over Littleton on Monday, May 10, 2021. (Photo by Arlene Allin)

BETHLEHEM — When the Profile softball team left the field after the semifinals two years ago, Alexis Sellers caught her coach Bob Burrill in the parking lot and asked him when the next practice was. His reply was “the season is over, we lost, we’re done.” Her answer was, “I wanna get better.”

Burrill says that Sellers has worked hard since the semis to improve.“Even when last season was canceled and through all the other sports seasons in between too, she’s worked. Now I have a pitcher.” And a catcher in Serena Devlin. “Sellers works well with Develin behind the plate,” said Burrill.

On Wednesday, Sellers threw four pitches to send the first Crusader packing and served notice she meant business. When the dust settled on the 17-1 win in five innings, Sellers had fanned six including the side in the second, allowed three hits and walked none. Sellers allowed small hits and her teammates on the infield handled seven putouts.

On a strikeout, Devlin picked a runner off to cancel a hit in the third inning. “That was a good little move,” said Burrill.

The Crusaders ended the shutout in the fifth when Taylor Marsh, with her second hit, sent in Jaime Lamarre to make the one Patriot miscue count.

Burrill added, “We’ve been cutting down on the errors that haunted us early. We’re very young and getting better as time goes by. Our bats were better today than they have been and the pitches were where they needed to be. We played good defense.”

The Patriots’ attack was potent. The Pats put the ball in play and ran as if their lives depended on it. Six runs in the first sparked by a leadoff hit by Zoe Liva as the Crusaders struggled on defense. Five more runs in the third as Maddy Carbonneau labored to find the zone. Kyah Knight had the lone hit.

LHS coach Serena Quillin wanted a clean game. “That’s what we’re after. Minimize our errors. One mistake and others follow then it’s tough to get out of it. With a very young team and a year off and games canceled, it’s been hard. Our bats were slow to get going, but we did score.”

Littleton (0-6) will be home with Profile on Friday. Profile (6-2) will be at Colebrook on Wednesday.

LAKE REGION 17, LAMOILLE 11: In Hyde Park, Anzley Crafts went 5-for-6 with a double, triple and four RBI, Taylor Menard was 3-for-6 with a home run and three RBI and Mariah Bacon had three hits and three RBI as the Rangers slugged their way to a second win.

Tyra Scelza, Maya Auger, Caylin Wesoja and Jessica Johnson each added an RBI for the Rangers, who batted around in the fifth.

WOODSVILLE 14, LISBON 2: In Woodsville, junior Jessica Riley ended the game with a two-run home run to right-center field to make Woodsaville 9-1 in D-IV going into its big rematch on Friday at D-III White Mountains (7-1). The Engineers handed the Spartans their only loss this season.

Friday’s game in Whitefield begins at 4 p.m. Next for Lisbon (5-3), a Wednesday game in Moultonborough.

LAKE REGION 22, LAMOILLE 8: In Hyde Park, Shane Stevens went 4-for-4 with a double, triple and intentional walk and Gabe Gardner had two doubles among his three hits and three RBI as the Rangers rallied to paste the Lancers in five.

On defense in the fourth, Stevens tracked down a deep fly ball, then turned and threw the runner out at first for a 7-6-3 double play.

Freshman Jonathan Gilcris pitched three innings of relief to get the win.

“I’m proud of how the guys reacted after being down 8-3,” LR coach Shawn Perron said. “They could’ve hung their heads, but they stayed positive and upbeat and came away with the W.”

Grady Millen tossed three scoreless innings with six strikeouts and no walks to get the win. Danny Huerter absorbed the loss. Jack Price and Danny Burnell had two hits each for the Pats.

PITTSBURG-CANAAN 7, GROVETON 3: In Groveton, the visiting Yellowjackets won it in extra innings to extend their win streak to five.

The Eagles’ Jimmy Blanco pitched 7⅓ innings and was a defensive standout on the mound. He also had a game-tying RBI double in the bottom of the seventh. Groveton’s Addison Leighton and Chris Corliss had triples.

“Finally got some runs across the plate today. We have been hitting decent but unable to get the big hit when we need it,” Engineers coach Brent Cox said. “Hopefully today we can build from it.

“Jack Boudreault had a great day. Moved him to leadoff and he performed well,” Cox added. “He also had a very strong outing on the mound. Very pleased with his composure lately and his drive to get better.” Boudreault fanned 11 and walked one in six IP, and Hogan finished up.

The Engineers (4-6) host White Mountains (7-2) on Friday. Next for the 4-5 Panthers, a Wednesday home game with Moultonborough.

MONTPELIER 7, NCU 0: In Montpelier, the Solons improved to 3-1. North Country takes a 1-2 record into their next match Thursday at home with BFA-St. Albans.

“Although Montpelier dominated the matches with more experienced players, the North Country girls stepped up and played their best, winning many points and challenging their opponents,” Falcons coach Liz Bosco said.

Overall the Hilltoppers had eight hits and made no errors on the day.

They look to regain their winning ways Tuesday at Colchester. They beat the Lakers 6-1 earlier this season.