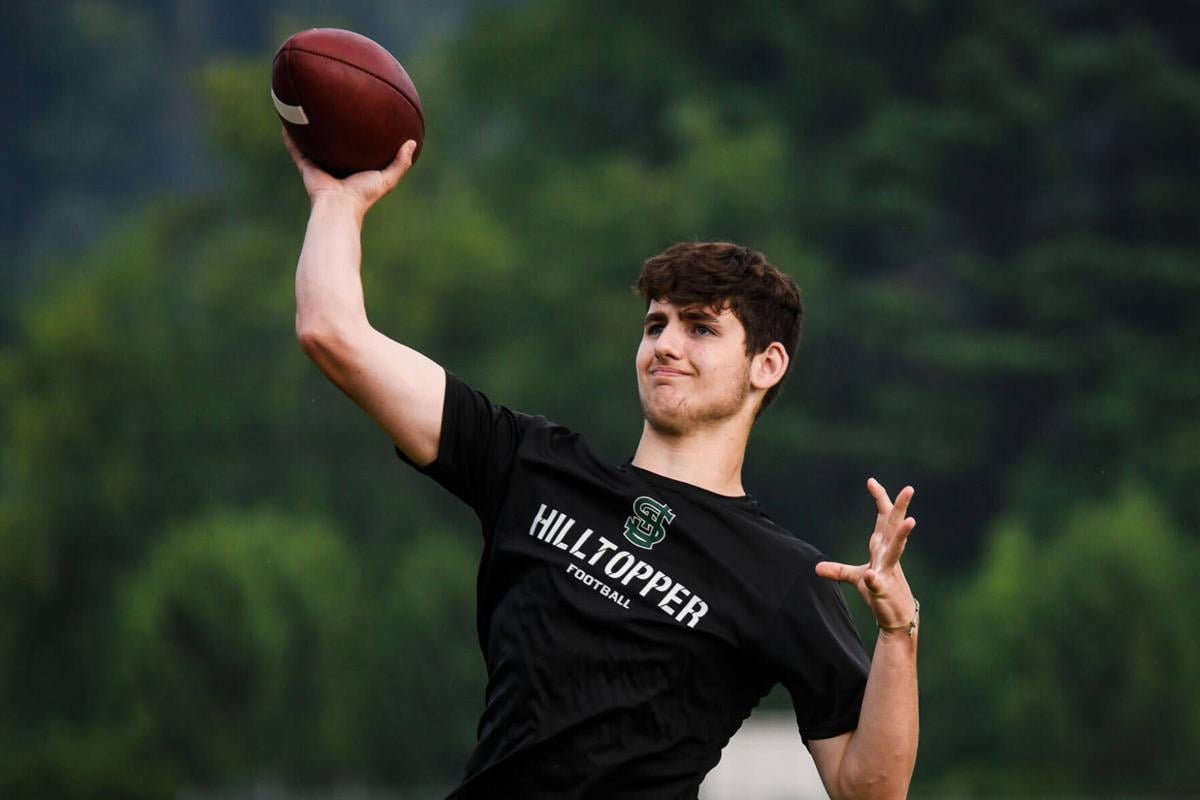 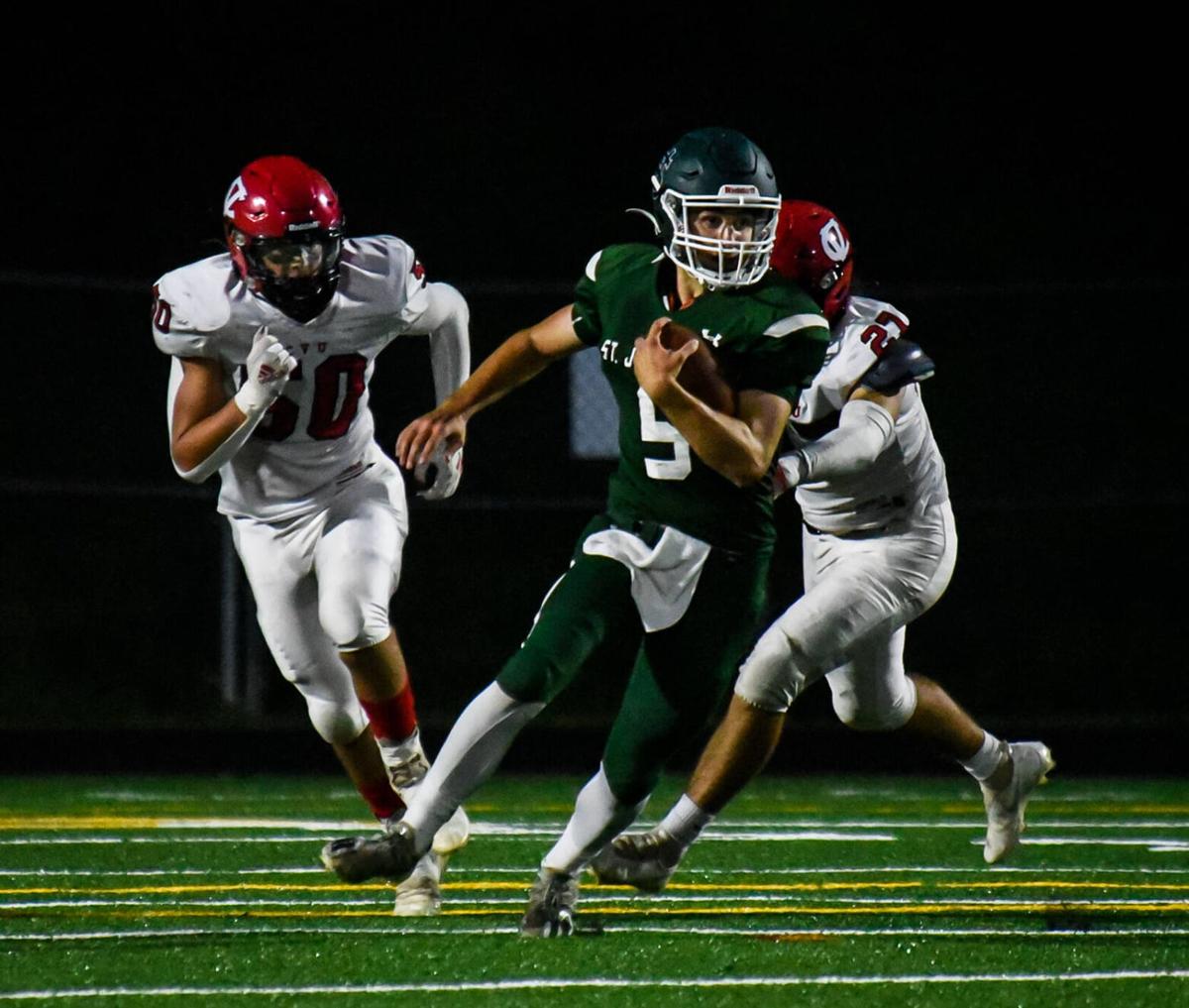 St. Johnsbury quarterback Quinn Murphy breaks free during the Hilltoppers' 35-23 win over Champlain Valley in the first game under the lights on artificial turf at the newly-renovated Fairbanks Field on Friday, Sept. 10, 2021. (Photo by Michael Beniash) 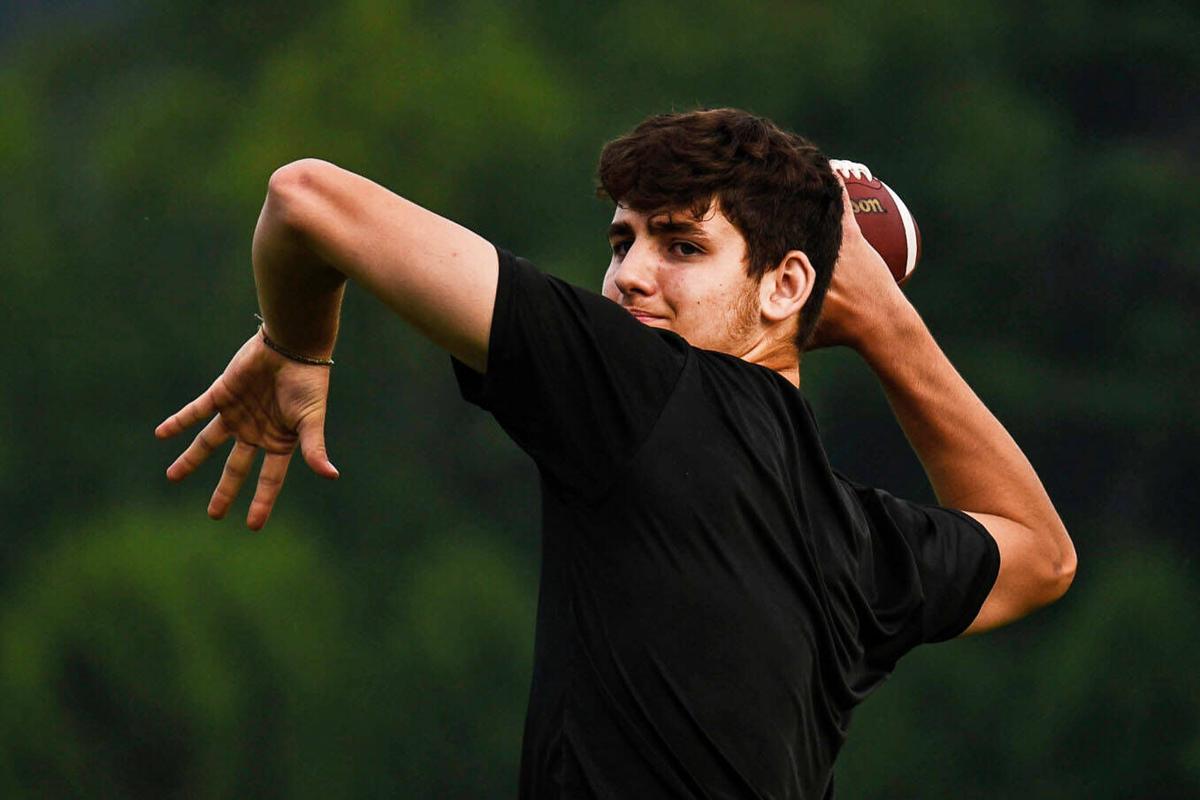 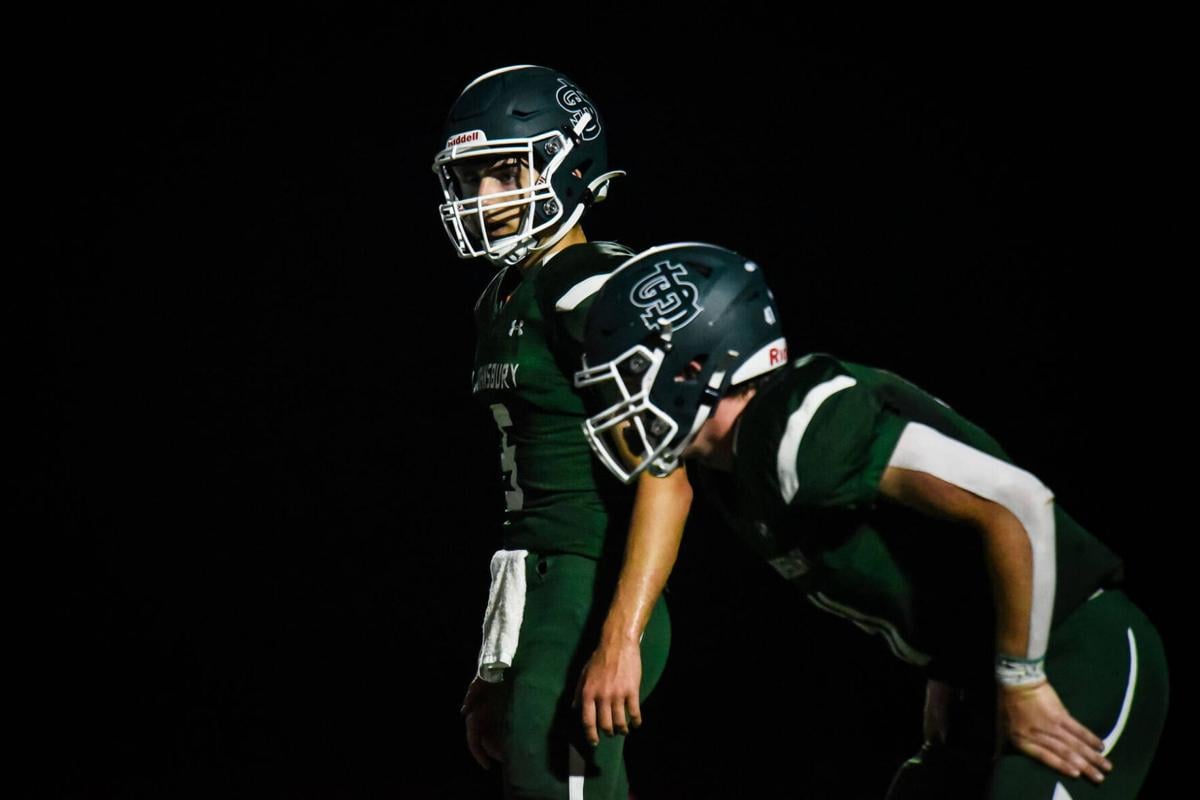 St. Johnsbury quarterback Quinn Murphy breaks free during the Hilltoppers' 35-23 win over Champlain Valley in the first game under the lights on artificial turf at the newly-renovated Fairbanks Field on Friday, Sept. 10, 2021. (Photo by Michael Beniash)

Quinn Murphy can beat defenders with his arm.

“To be honest, my sophomore year, I was not very athletic at all,” Murphy said.

The 16-year-old Hilltopper junior has come a long way as an athlete since last winter. And he’s still improving with each passing week.

A fifth-string JV quarterback as a freshman, Murphy has transformed into a dangerous dual-threat QB in his first season of varsity tackle football in 2021. He’s helped guide the Academy (3-2) to fourth place in the tightly-contested Division I football standings with two games left in the regular season.

“In our program, the QB position has to be athletic,” St. J coach Rich Alercio said. “Good enough to run, to make good decisions and to throw the ball accurately. That’s the combo we look for and Quinn has done a great job of it.”

The 6-foot, 185-pound Murphy has combined for 1,400 total yards and 15 touchdowns through five games. He has St. J in a position to earn a home playoff game.

Murphy’s rise is the product of hard work — he spent the offseason working out with Adrian Guyer at XIP Training Systems in Lyndonville.

The catalyst? A ski accident in January in which Murphy broke bones in his spine.

“A broken back, it was an eye-opener,” Murphy said. “It was kind of scary. But I had no choice but to work harder.”

Murphy was skiing with friends at Burke Mountain in January. He fell and hit a tree. He broke four Transverse Processes on his right side.

He was sidelined for six weeks, allowing the injury to heal naturally. His first physical activity, stretching, came in late February. He linked up with Guyer at XIP in early March and went to work.

“Missing three months of time really made me work harder than I would have,” Murphy said.

“Adrian told me flat out at the start that, ‘you’re pretty slow right now and you have pretty terrible running mechanics,’ said Murphy, who split time at QB during last season’s 7-on-7 touch high school football season. “I was never a running threat at all. He’s helped with my change of direction and making people miss. It’s taken a lot of time. He’s put a lot of time into it. I still have more work to do.

“Without Adrian, I wouldn’t be where I am right now.”

“The amount of work he’s put in the offseason has prepared him,” Alercio said. “Quinn has the speed, size and strength to be a run threat and throws a really good ball too.”

Murphy is coming off his best overall game of the season, leading the Hilltoppers to a 35-28 victory over Essex on Oct. 1. He passed for 217 yards and one touchdown rushed for 66 yards and three scores and picked off two passes on defense, including the game-sealing pick with under a minute to play.

“It was his breakout game as a runner,” Alercio said. “The play from 15 yards out, he made a very athletic move to get to the outside, tip-toed down the sideline, then scored standing up. That was different. It was something we hadn’t seen from him; the ability to be elusive.”

“He’s running our offense and that’s not an easy thing to do,” Alercio said. “His decision-making is good, he understands the offense and he’s been able to execute.”

Murphy is looking to follow in the footsteps of some ex-St. J quarterbacks who have had great success under Alercio, including Colton Hudson, Collin Urie, Jake Cady and Trey Alercio.

“We never projected him to be where he is now,” Alercio said. “Quinn’s exceeded our projections for the season. The kid works hard. It’s silly to say, but he wants to be a good quarterback and he puts the time and effort into it.

“Everyone wants success, but not bad enough to do all the work.”

Murphy is quick to credit his teammates for his success.

“I think our line is pretty underappreciated,” he said. “They are really the reason we’re doing anything right now. They are the reason I am in one piece.”

St. J opened the season with a humbling 41-9 defeat at third-ranked Hartford. Murphy didn’t play on the defensive side of the ball. And he struggled on offense.

He’s been the starting safety from Week 2 on.

“It was my fault,” Alercio admitted. “He can be hard on himself and putting him on defense has helped him not to reflect, good or bad, and forced him to get back into the game quickly. The mistake I made was trying to protect him in that opener. Since he’s been on defense, he’s been better than ever on offense.”

The Hilltoppers knocked off second-ranked Champlain Valley in Week 2 and handled Colchester to move to 2-1. After a 28-14 loss at No. 1 Rutland, St. J upped its record to 3-2 with a shootout win over Essex.

“We started off pretty rocky at Hartford,” Murphy said. “We didn’t play like we were ready, but we bounced back strong after our two losses.

“We don’t give up. Everybody works hard. It’s a total effort around here.”

After a bye last weekend, the Hilltoppers close the regular season with a road game Friday night at Burlington/South Burlington and conclude with the 115th rivalry game, hosting rival Lyndon on Oct. 23.

They are fighting for a top-four playoff seed in a crowded pack – seven of the top eight D-I teams have at least three victories.

From breaking bones in his back to putting the team on his back, Murphy and the Hilltoppers are hungry for more.

“I am taking it one game at a time and trying to do my best, trying to be myself,” he said. “I just want to win a state championship.”

Help us choose the Caledonian-Record's boys high school Athlete of the Week for the week of Oct. 7-11.

Girls Athlete Of The Week: Ballot For Oct. 7-11

Help us choose the Caledonian-Record's girls high school Athlete of the Week for the week of Oct. 7-11.