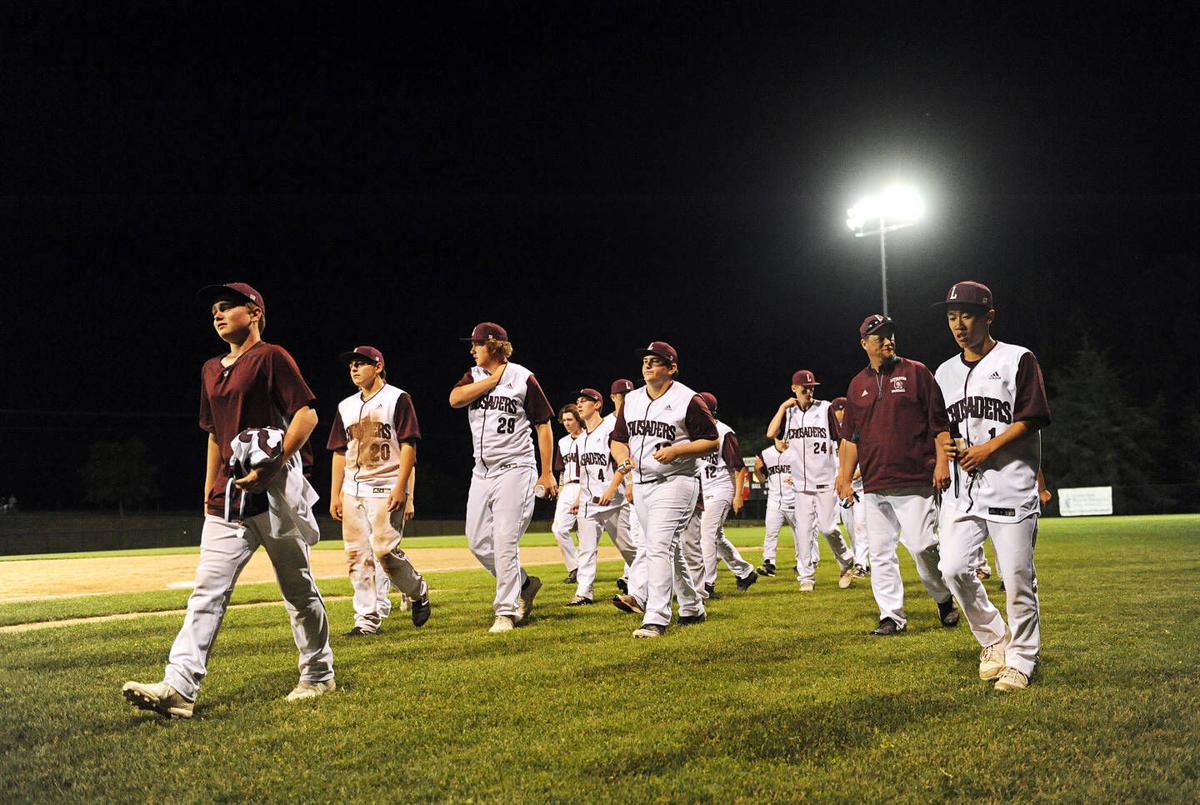 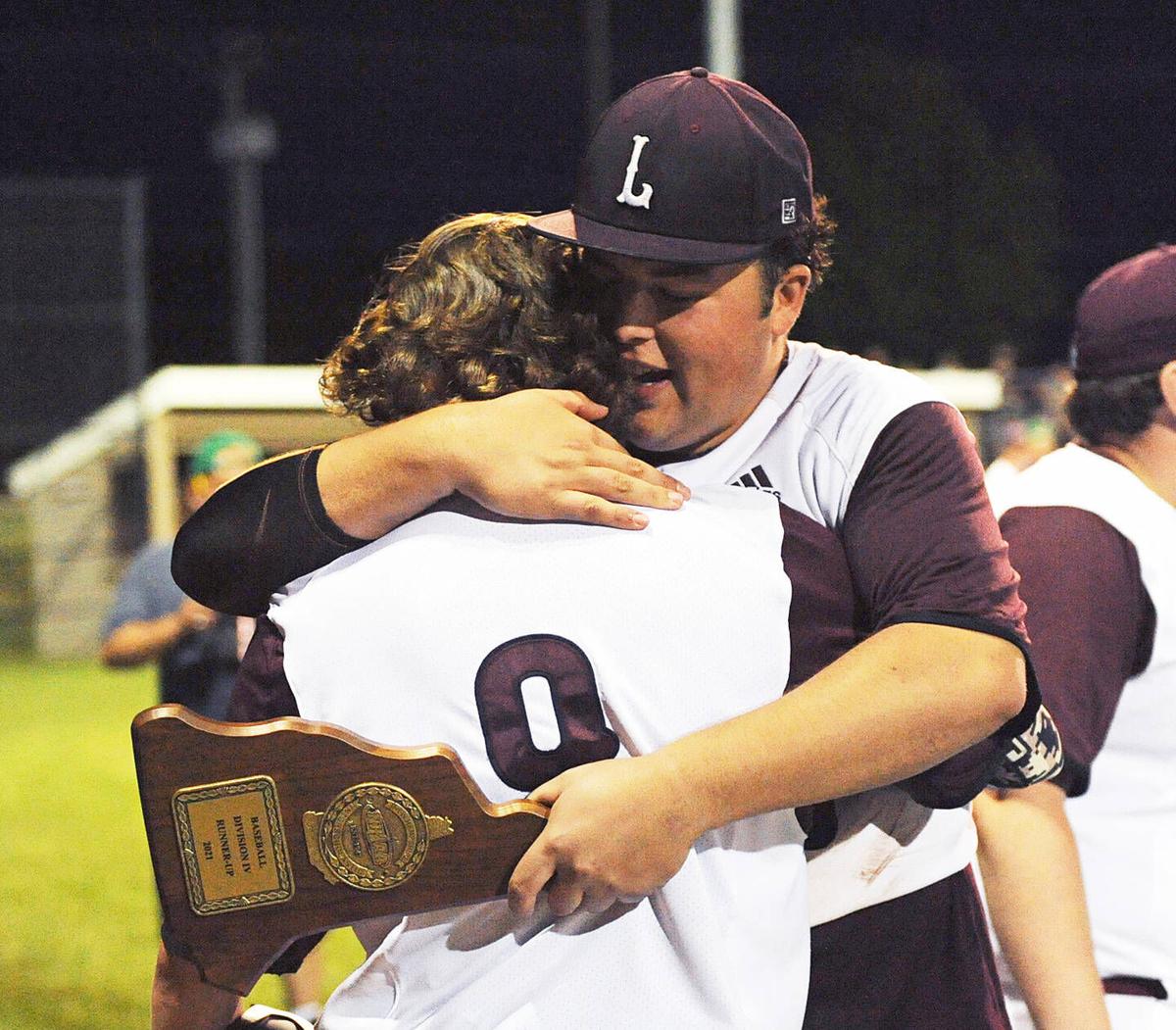 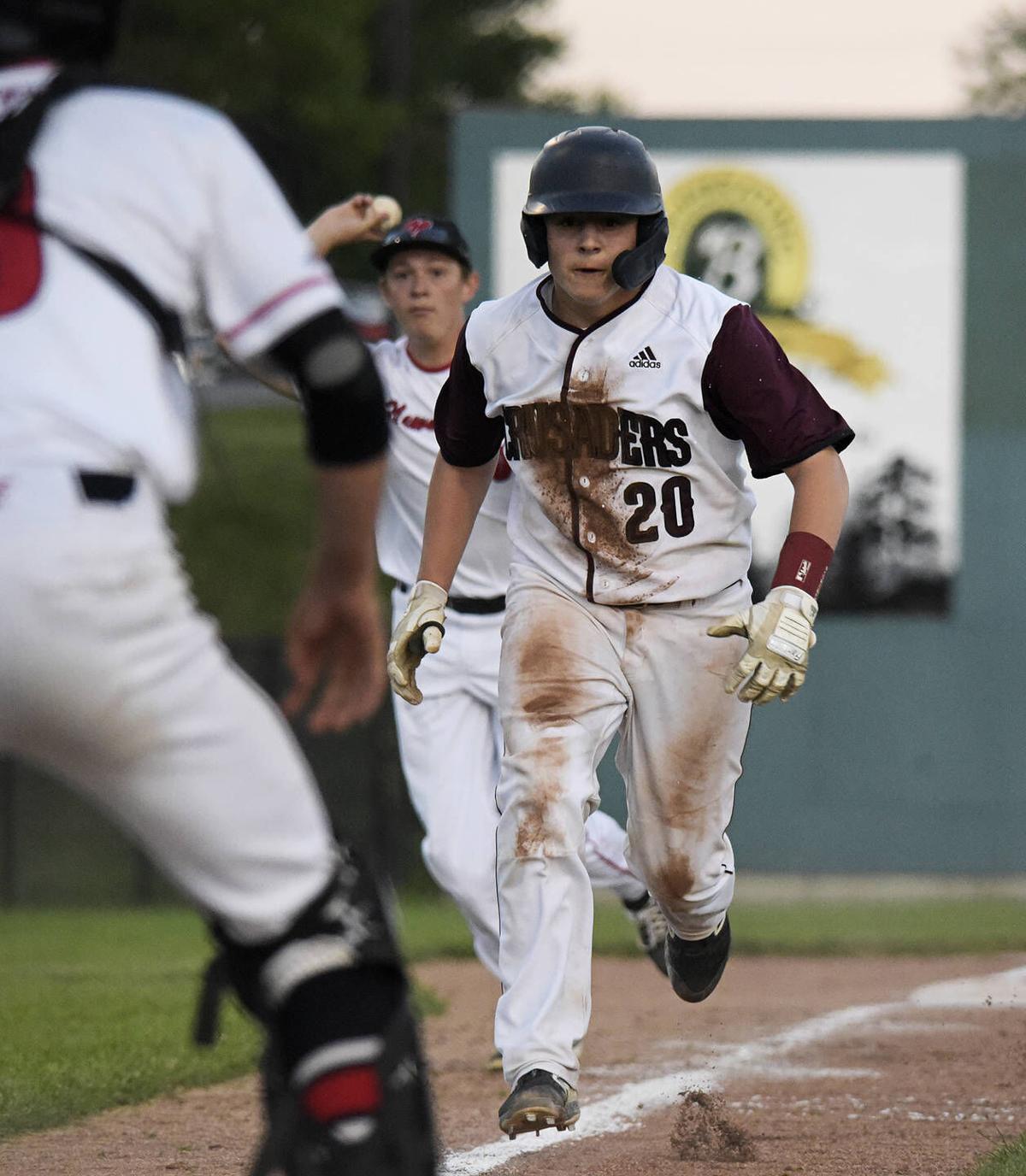 Littleton's Kyle Fuentes gets caught in a rundown during a 10-0 loss to Newmarket in the Division IV finals at Robbie Mills Field in Laconia on Saturday, June 12, 2021. (Photo by Paul Hayes) 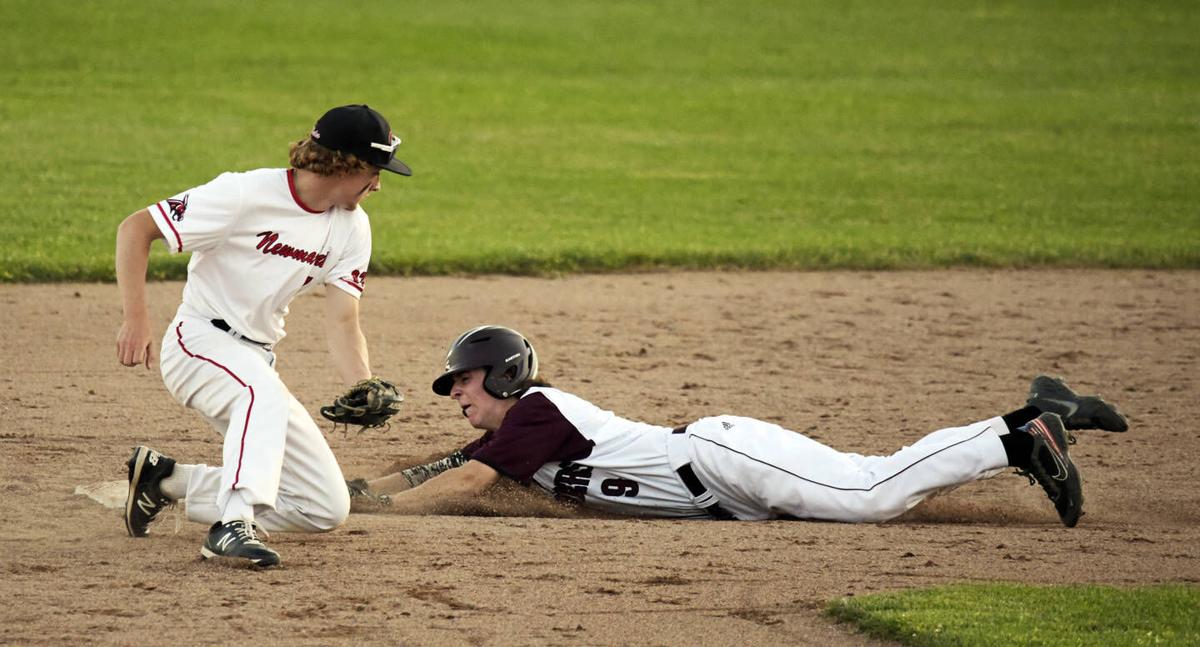 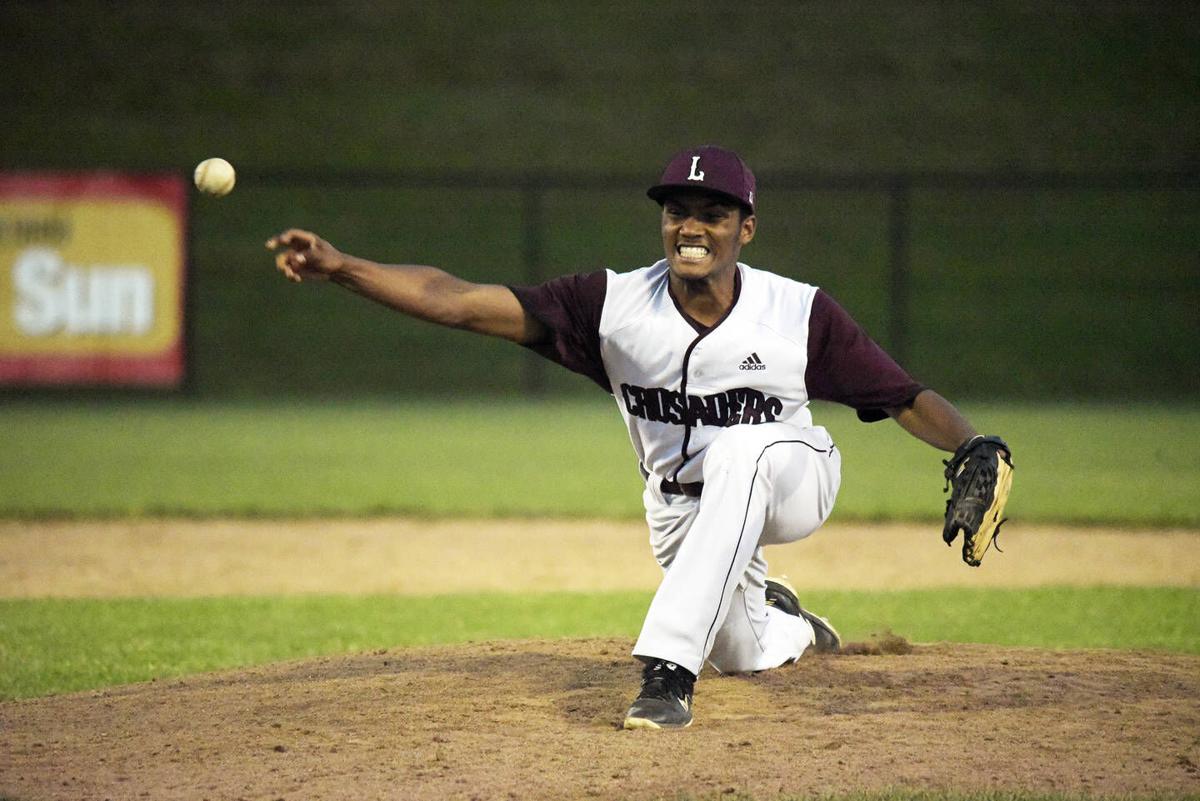 Littleton's Kyle Fuentes gets caught in a rundown during a 10-0 loss to Newmarket in the Division IV finals at Robbie Mills Field in Laconia on Saturday, June 12, 2021. (Photo by Paul Hayes)

Then the Mules turned into thoroughbreds.

Newmarket (14-3, 10-3 D-IV) erupted for seven runs in the top of the sixth as it beat Littleton 10-0 in the Division IV championship at Robbie Mills Field on Saturday night.

Despite the final score, it wasn’t easy.

Making its fourth finals appearance in eight years, Littleton (16-5, 15-2 D-IV) kept it a one-run game through five innings before Newmarket broke out to score double-digit for the seventh time this season.

“[Littleton are] well-coached, they’re competitive and scrappy, and they showed it through the whole game,” said Newmarket head coach Stan Jurkoic. “We had that one big inning, but it wasn’t indicative of the game.”

The Mules earned their eighth state title overall and second straight, after hoisting the trophy in 2019. [The 2020 season was canceled by COVID].

Senior all-state selection Hayden Goodreau threw a complete-game three-hitter (10 strikeouts, one walk) and finished with three hits, three runs and an RBI batting leadoff as Newmarket avenged a 3-1 loss to Littleton in the 2018 finals, their last meeting with the Crusaders.

Goodreau was well-rested after teammate Steve Coffey, the D-IV Co-Player of the Year, went the distance in a 6-3 semifinal win over Derryfield.

It was the Mules’ seventh shutout win of the season, and third of the playoffs.

Up 1-0, Newmarket extended its lead in the decisive sixth inning.

Nick Goodman blooped an RBI single over the outstretched glove of LHS second baseman Austin Marquis to make it 2-0. Next, Haydn Russell fired a ground ball double just inside the left-field foul line.

“It’s the old saying. They hit ‘em where we ain’t. You take for example that flare over [Marquis’] head. If he’s back two more steps he probably catches that and doubles the kid off second and we end the inning down 1-0. But it had just enough on it, it snuck over his head. They’re not lying when they say it’s a game of inches,” said LHS head coach AJ Bray.

Finkle, an all-state first-team pick, was pulled after 102 pitches. JP Perez (one K, one hit, three walks, three runs) entered the game and got the final two outs for Littleton but the damage was done. Newmarket led 8-0.

“A lot of times we’ve had those big innings go our way, and today we didn’t,” said coach Bray.

For Littleton, it was a disappointing end to an outstanding season.

In a normal year, the Crusaders would have been the fifth seed, with a first-round bye and home-field through at least the quarterfinals. However, under the open tournament format during COVID-19, they played a total of five road games, including Saturday’s championship.

Littleton traveled 430 miles and 9 hours round-trip over the past two weeks. In the process, they survived some tough tests. LHS scored two runs in the top of the seventh to edge Groveton 6-5 in a play-in game on May 31 and went to extra innings in a semifinal 8-3 win at Woodsville on Wednesday.

“There were times the last two weeks I didn’t know if we were going to be here,” said coach Bray. “It’s been a tough group all year. I told them they have nothing to be ashamed of, don’t let one bad inning define a season.”

Following last year’s COVID hiatus, simply having a season was a gift.

For some Crusaders, it was the first opportunity to play competitive baseball in two years, due to a lack of non-high school options in the North Country.

While older players were glad to be back, others were getting their first taste of LHS baseball.

Fillion batted .480 this season and was an all-state second-team pick, Fuentes had one of three LHS hits in the title game.

That youth gives the Crusaders a strong foundation moving forward.

“We rolled out a starting lineup today with four freshmen on it. And they all had great seasons,” said coach Bray. “Nobody likes to lose, it’s not fun, but those kids will learn from it. And I think we’re going to be better for it.”

NOTES: Littleton graduates eight seniors: Finkle, Marquis, Parker Paradice, Jaxon Edwards, Landon Bromley, Jason Hamilton, Stephen Lucas and Cole Hadlock. … The championship was Littleton’s second divisional loss of the season, the other being a 14-4 loss to top-ranked Lin-Wood on April 15, and their third shutout loss of the year. … Three of Littleton’s five losses this season came against D-III opponents White Mountains (twice) and Berlin. … The loss snapped Littleton’s eight game win streak. Newmarket won its 12th straight to end the season. … Littleton is now 4-7 all-time in 11 state finals appearances, with wins in 1961 and 1979 in Class M and 2016 and 2018 in D-IV.

“I don’t trust any of them. It doesn’t mean I won’t hear them out. But they lied too much already.”

“He’s trying to put together staff and cost, but we’ve said that cost will not be an issue here.”

“It seems critical to me that we maintain the rink. At the end of the day, this is a town facility owned by the town and we have a duty to maintain our town buildings."

“It’s our duty and responsibility to care for those patients and sometimes they can be dangerous."