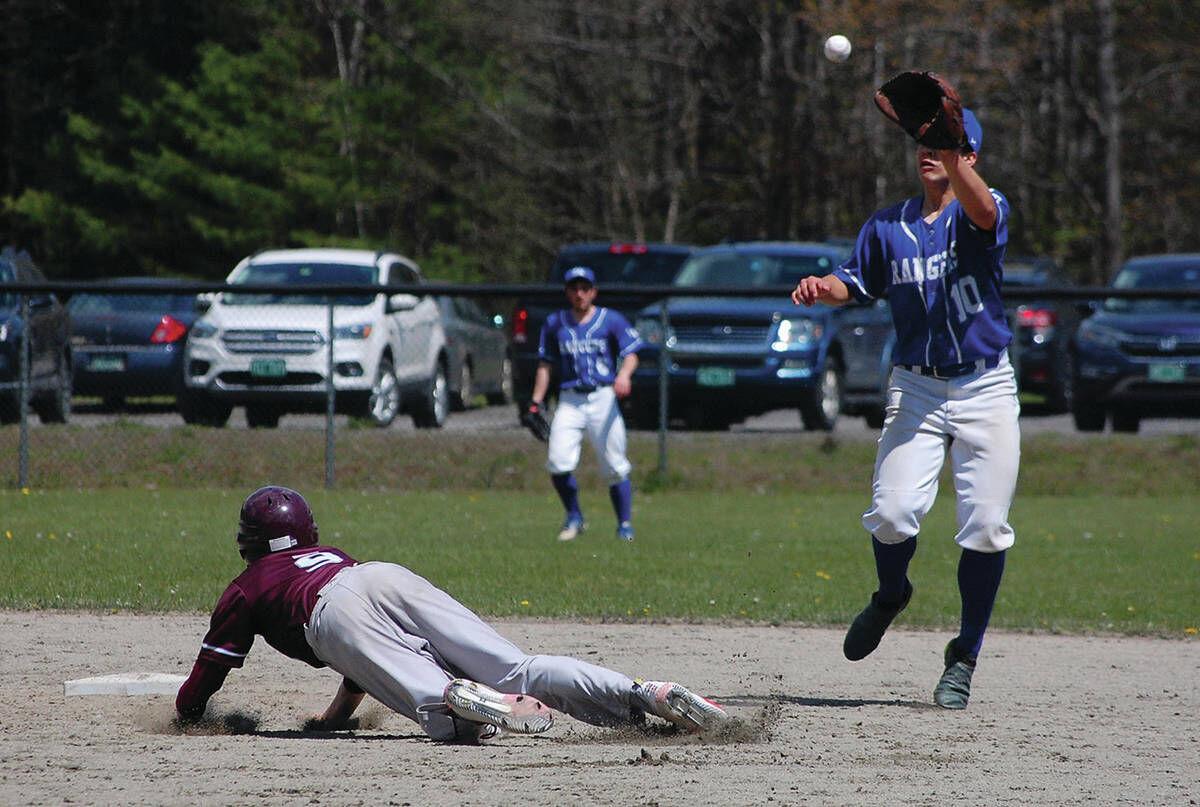 LI's Dylan Dwyer dives for second base with a stolen base as Lake Region shortstop takes the throw at Saturday's game. (Photo by Stephen Garfield) 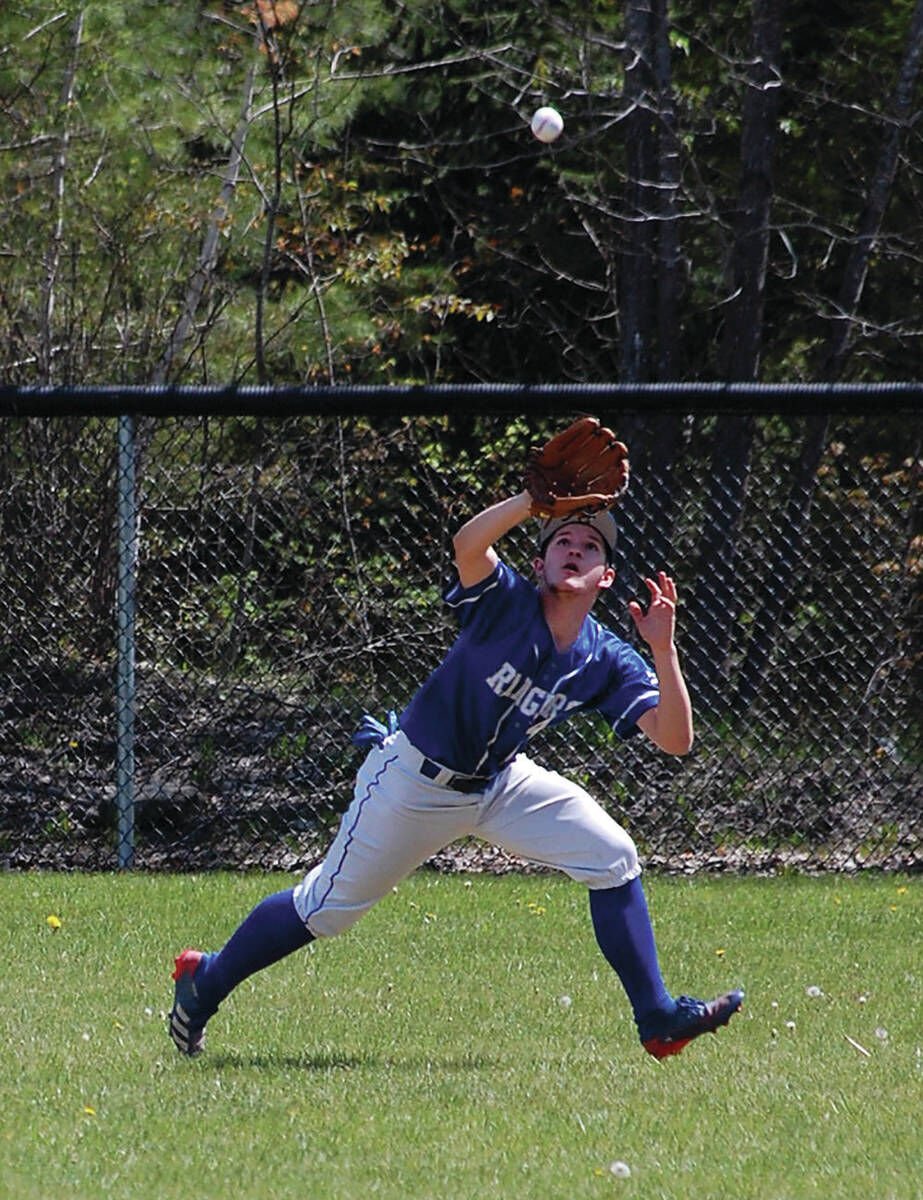 Rangers right fielder Robbie Bowman makes a catch in the first inning of Saturday's game at Lyndon Institute. Ir was one of two stellar catches he made in the inning. (Photo by Stephen Garfield)

LI's Dylan Dwyer dives for second base with a stolen base as Lake Region shortstop takes the throw at Saturday's game. (Photo by Stephen Garfield)

Rangers right fielder Robbie Bowman makes a catch in the first inning of Saturday's game at Lyndon Institute. Ir was one of two stellar catches he made in the inning. (Photo by Stephen Garfield)

LYNDON CENTER — Whit Steen and Will Mitchell combined on a three-hitter and the Lyndon Institute Vikings played errorless ball behind them in downing Lake Region 8-0 Saturday at McDonald Family Field.

It was the fifth win in a row for LI, which trails first-place Hartford (8-0) and runner-up Spaulding (9-1) in third place in D-II. Steen (five innings, nine Ks, two hits) was the pitcher of record, while Mitchell hurled two innings of one-hit relief with three strikeouts.

Up 1-0, a bases-loaded walk and a hit batsman made for a 3-0 score at the end of three innings. After two more in the fifth, LI wrapped it with its last three runs in the bottom of the sixth. The Vikings generated eight hits on the day, with Dylan Dwyer going 2-for-3 with an RBI. Dylan Miller added an RBI triple while Trevor Lussier belted an RBI double. Overall the Vikings had six hits.

The Vikings bring a 7-1 record into their next game Tuesday at home (4:30) with Randolph. The Rangers (4-5), who had won three straight, are also at home Tuesday for a 4:30 game with Harwood.

BFA-ST. ALBANS 11, SJA 5: In St. Albans, the host Bobwhites scored seven runs in the fourth inning to overcome a 5-2 deficit.

Will Fowler was 2-for-4 with two RBI for St Johnsbury, while Colby Garey-Wright was also 2-for-4 with a double for the Hilltoppers.

Christian Vallee, Isaac Gratton and Seneca Durocher each had two hits to lead BFA (6-5). Next for the Hilltoppers, a Tuesday 4:30 game at Mt. Mansfield

HAZEN 10, DANVILLE 0: In Danville, Lyle Rooney pitched a seven-inning no-hitter with 15 strikeouts and two walks to move the Wildcats to a 7-2 record.

It was 1-0 going into the sixth inning when Tyler Rivard doubled in Jadon Baker, and Rooney scored Tyler on an E6 to make it 3-0. Baker then belted a three-run homer in the top of the seven to ice it.

Jacob Baesemann allowed six hits with eight strikeouts in 6⅓ innings for Danville, which next visits Peoples on Tuesday at 4:30. Also Tuesday at 4:30, the Wildcats (7-2) host Williamstown.

LYNDON 3, LAKE REGION 0: In Lyndon Center, Viking freshman Jaydin Royer baffled the Rangers with a no-hitter with 10 strikeouts and three walks, leading Lyndon to an 8-1 record and first place in D-II.

Lake Region’s Mikayla Richardson scattered eight hits. “We put the bat on the some but for the most part could not get anything solid,” Rangers coach Rick Hudson said. “Our defense was great. I like how we are coming together. This was a tough team for us to hold to three runs.”

The Hilltoppers started fast, going up 2-0 after two batters on Adriana Lemieux’s home run. A bases-clearing hit in the bottom of the second gave BFA the lead, and a three-run home run by Cadence Moore gave them the cushion for victory, making them 7-1 on the season.

NORTH COUNTRY 33, MOUNT MANSFIELD 3: In Jericho, senior Hailey Pothier and a host of Falcons teammates belted the ball all over the ballpark as North Country stopped a three-game skid.

Pothier was 4-for-5 with a homer and six RBI senior Korey Champney was 3-for-3 with two doubles and five RBI. Riann Fortin (3-for-5), Cecilia Marquis and Libby Prue (two hits each) had doubles while winning pitcher Jenna Laramie scattered five hits.

The Bucks go into their next game in fourth place in D-IV with a 6-2 record, having scored double-digit runs in each of their wins.

ST. J 4, MOUNT MANSFIELD 3: In Jericho, the visiting Hilltoppers got past the MMU Cougars (4-4) despite the retirement of top seed Mate Koszo (illness) in his match with Eric Bhave. “It’s too bad because the MMU number one is probably his biggest competition this year for the individuals,” Hilltoppers coach Dan Bosco said. “Mate tried a few games but couldn’t continue.”

Both doubles teams won, giving St. J Academy a 5-4 record going into Monday’s match at CVU. The Toppers then host Burlington Tuesday at 3:30

PROFILE 5, LITTLETON 4: In Littleton, it couldn’t have been much closer between the neighboring schools as the Patriots finally prevailed, reversing a 6-3 loss earlier this season to the Crusaders and improving to a 5-1 record. The teams meet up again Tuesday in Littleton (2-1).

ST. J 6, MOUNT MANSFIELD 1: In St. Johnsbury, the Hilltoppers won for the third time in their last four matches. A titanic battle at No. 5 singles gave the Cougars (5-4) their only win. Now 5-3, St. J hosts CVU on Monday and visits Burlington Tuesday.