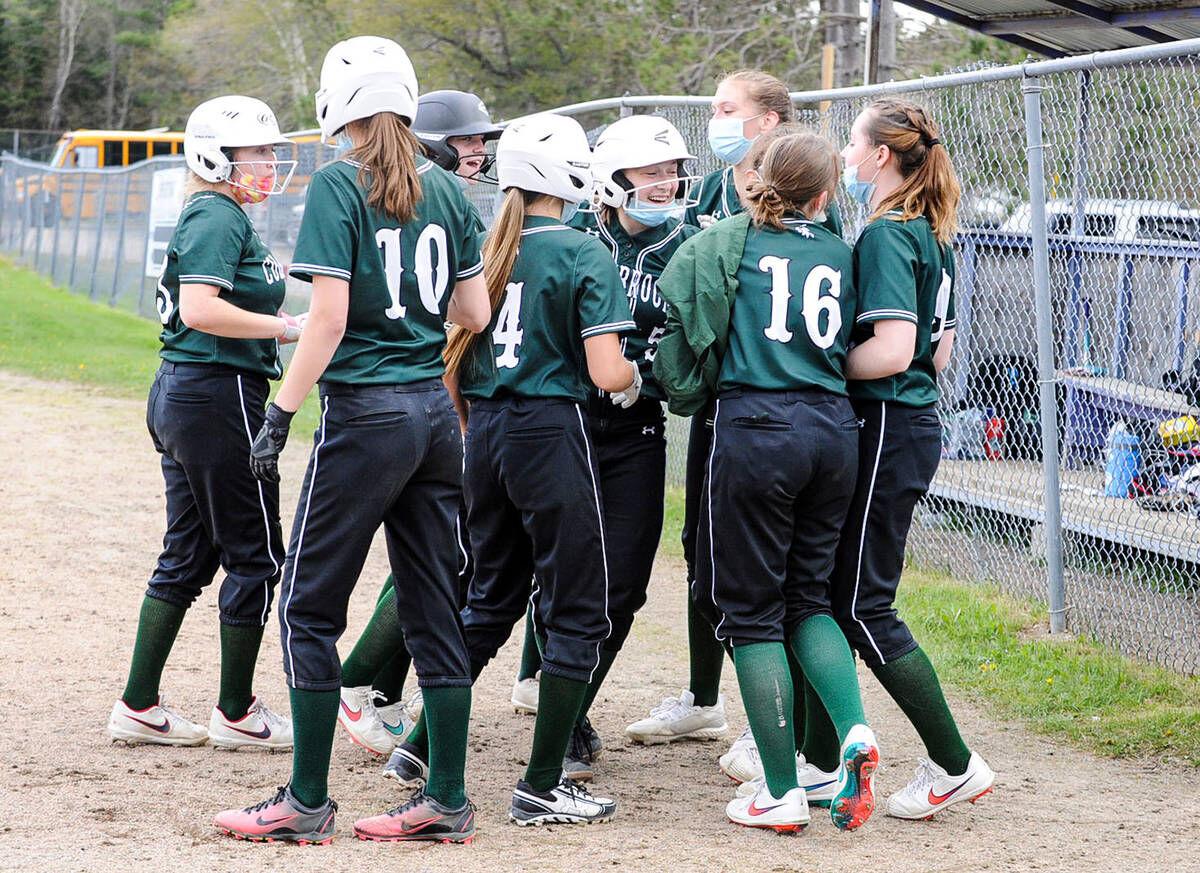 Sage Smith, center, is mobbed as she returns to the dugout after a grand slam that snapped a 6-all tie with Groveton in the top of the seventh on Friday, May 14, 2021. (Photo by Arlene Allin) 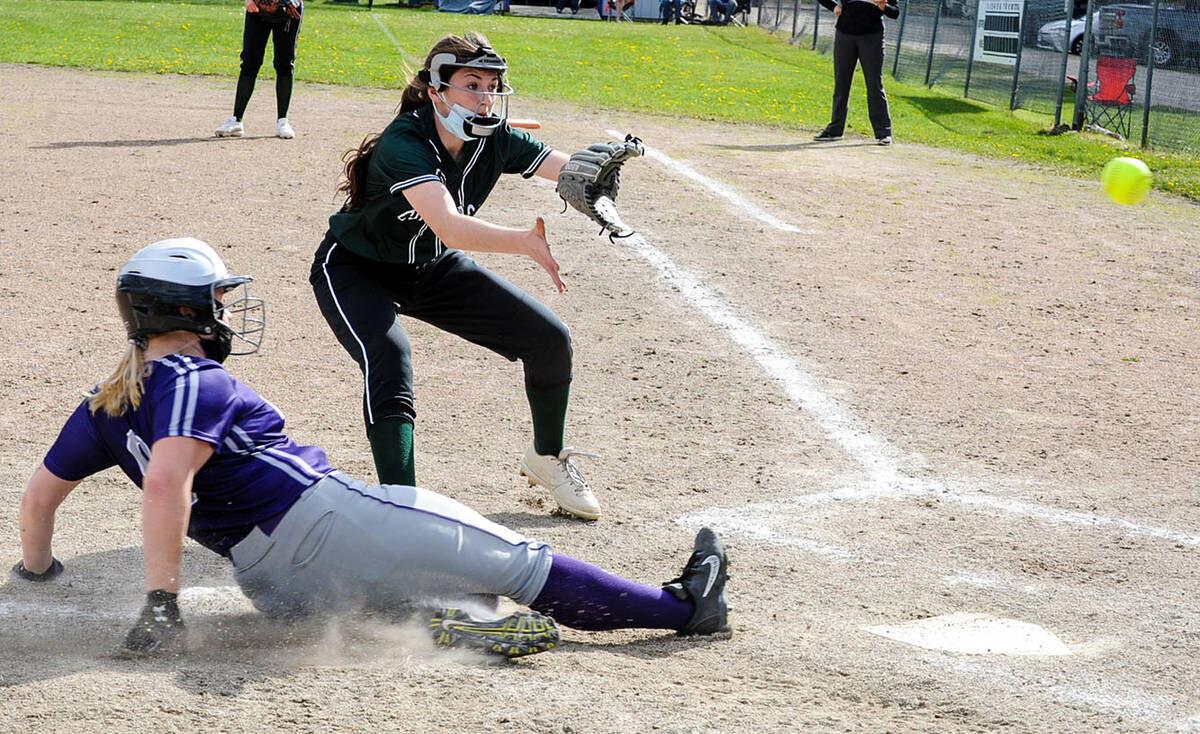 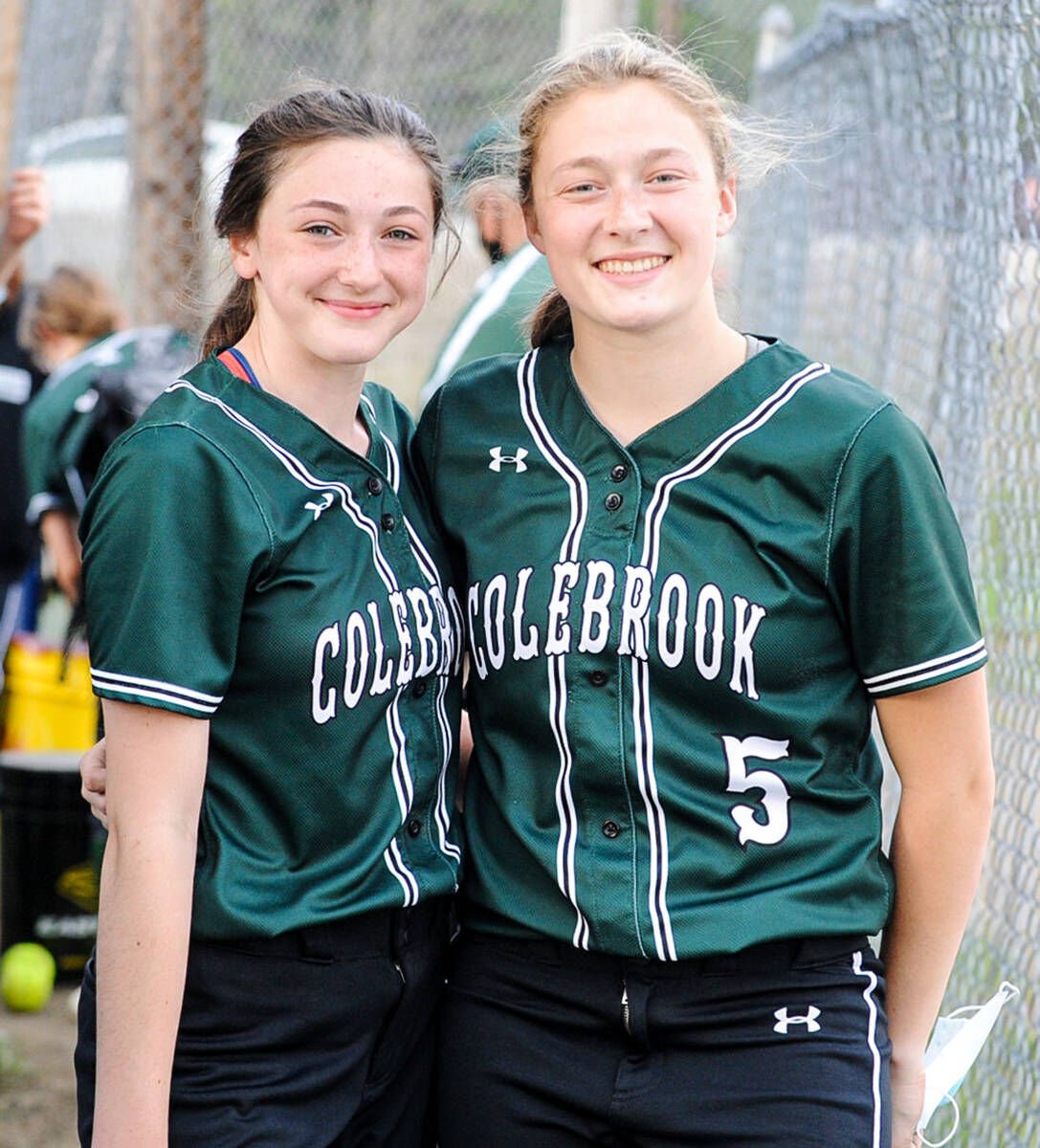 Colebrook pitcher Haley Rossitto and Sage Smith after their win over Groveton on Friday, May 14, 2021. (Photo by Arlene Allin)

Sage Smith, center, is mobbed as she returns to the dugout after a grand slam that snapped a 6-all tie with Groveton in the top of the seventh on Friday, May 14, 2021. (Photo by Arlene Allin)

Colebrook pitcher Haley Rossitto and Sage Smith after their win over Groveton on Friday, May 14, 2021. (Photo by Arlene Allin)

GROVETON — With the score tied at 6-all and the bases loaded in the top of the seventh, Sage Smith nailed one over the top of the right-center fence for the grand slam that brought victory for Colebrook, 11-6 over rival Groveton on Friday.

Smith, the Mohawks catcher, was 4-for-5 at the plate with a double and home run and six RBI. Sophomore Sierra Riff went 4-for-5 with a double in the leadoff spot and scored three times.

The late rally was set in motion by a single over second from No. 9 batter Sabrina Talmage to lead off the seventh. Riff followed with an infield hit and Emma McKeage walked to set the table for Smith.

The uprising went on. Sam Howe reached on a base hit and came home on a double by Haley Rossitto before the Eagles cut down a run at home for a first out. Kendall Hall had her second hit of the game before the Eagle on the mound, Kylie Lachance, recorded a seventh strikeout to end the Mohawks decisive around-the-order romp.

CA coach Mike Ouellet said, “Sage has been hitting the ball all season and her batting average is close to 800. Sierra as a sophomore, has really stepped up this season. Our defense is stronger when Haley pitches. We knew Groveton would be a tough game for us. The girls get better every game and I was proud they showed resilience today.”

The two were in see-saw seasons, Colebrook at 3-4 and Groveton at 3-5, and this game was the same back and forth. The Mohawks jumped out by two in the first on a double by Smith and a couple of miscues jammed the bases. The Eagles escaped.

The score was even at 2-2 after two innings. With an infield squibber to start, Reese Routhier worked her way around and scored on an errant pitch. Emmalee Deblois made a walk count on a Katie Woodworth single. Routhier manufactured her second run in the third to take a 3-2 lead for the Eagles.

The Mohawks came out of the top of the fourth with three runs and a 5-3 lead. Riff scored on a Smith hit and Emma McKeage scored on a bases-loaded walk to Rossitto. Hall drove in the third run.

The Eagles plated Amanda Newman in the fourth to close to one, 5-4 and after leaving the bases loaded in the previous three innings, did take the lead, 6-5, with two runs in the fifth. A double by Catherine Bushey made a Micki Grootenboer walk count to even the score, then Bushey used an error to score the go-ahead run. For Groveton, Deblois, Routhier and Woodworth owned two hits each.

The Mohawks pulled even at 6-all with a run in the fifth as Smith motored around. Rossitto earned a sixth strikeout to help hold the line in the last two innings. In between came the grand slam.

GHS coach John Rooney noted, “Kylie pitched decent. We just need to go get the ball on defense. We can’t leave 14 on base and expect to win. We were tied a six in the seventh and gave up five runs. We weren’t expecting that hit. I had everybody moved over and she tagged it to right-center. We only have 11 players, so we’re limited.”

Colebrook (4-4) will be in Gorham on Monday. Groveton (3-6) will be in Colebrook on Tuesday and Lisbon Wednesday.