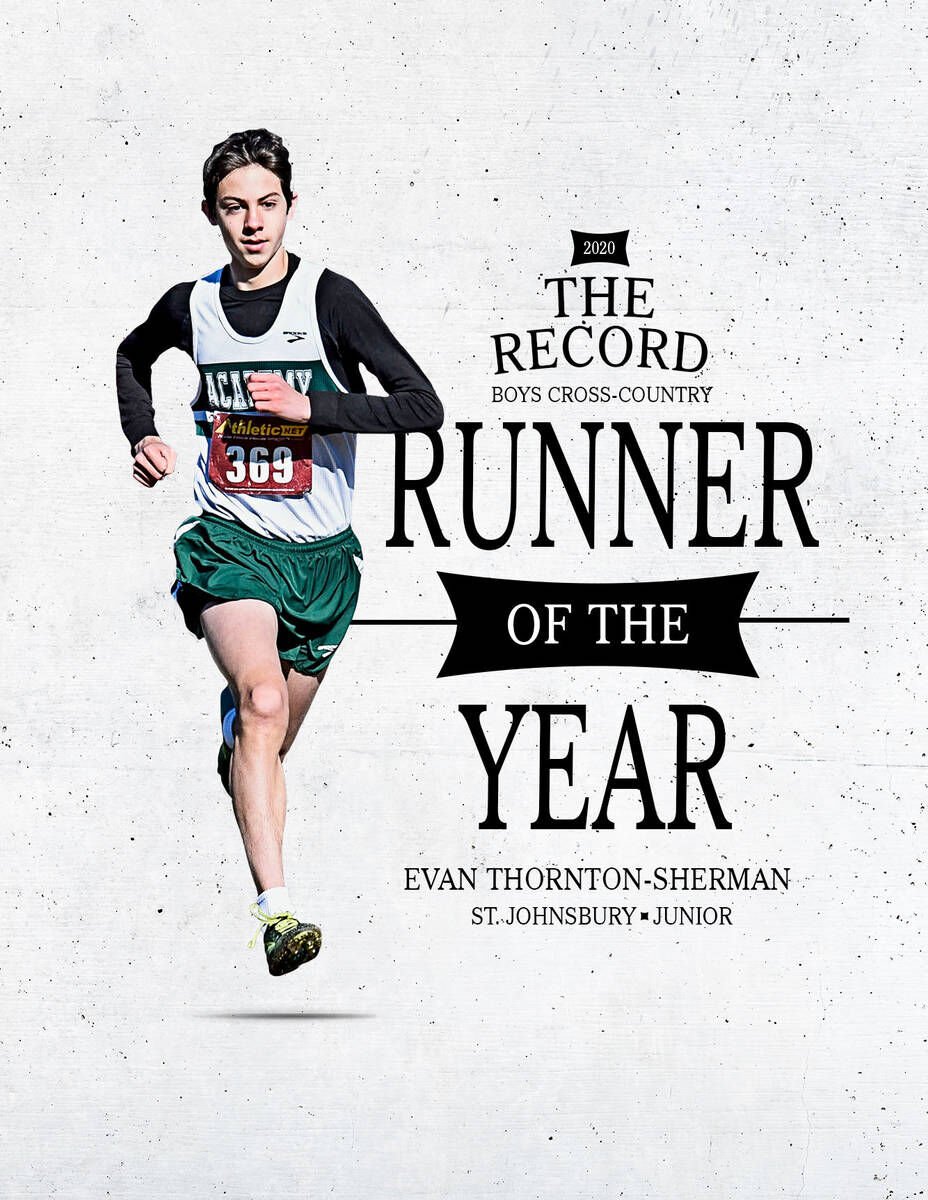 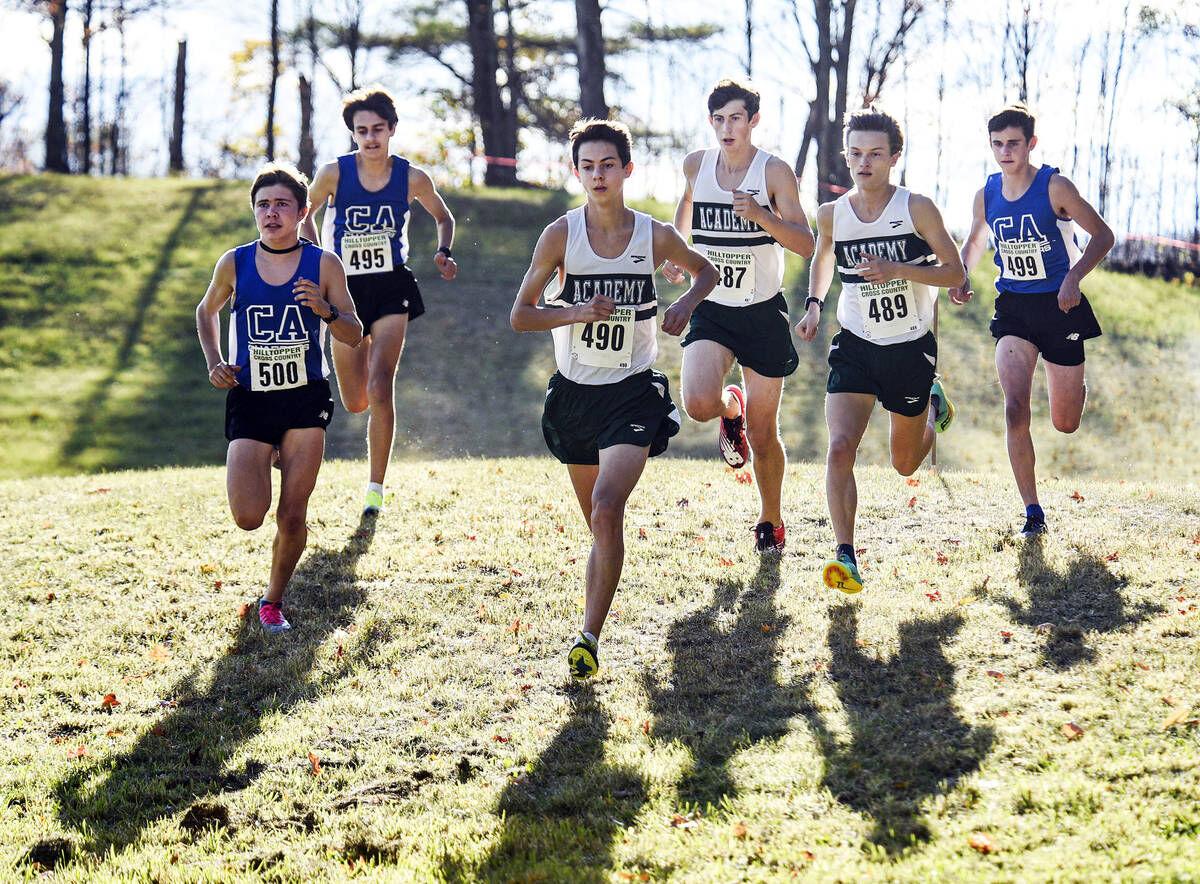 St. J Academy's Evan Thornton-Sherman (490), Braden Anthes, and Hale Boyden (489) take off from the start line with Cormac Leahy (500) and his Craftsbury teammates during the Hilltoppers' season-opening cross country race at Rankin Property on Thursday, Oct. 2020. It was the first race at the venue. Thornton-Sherman blazed the course in 16 minutes, 34 seconds. (Photo by Michael Beniash) 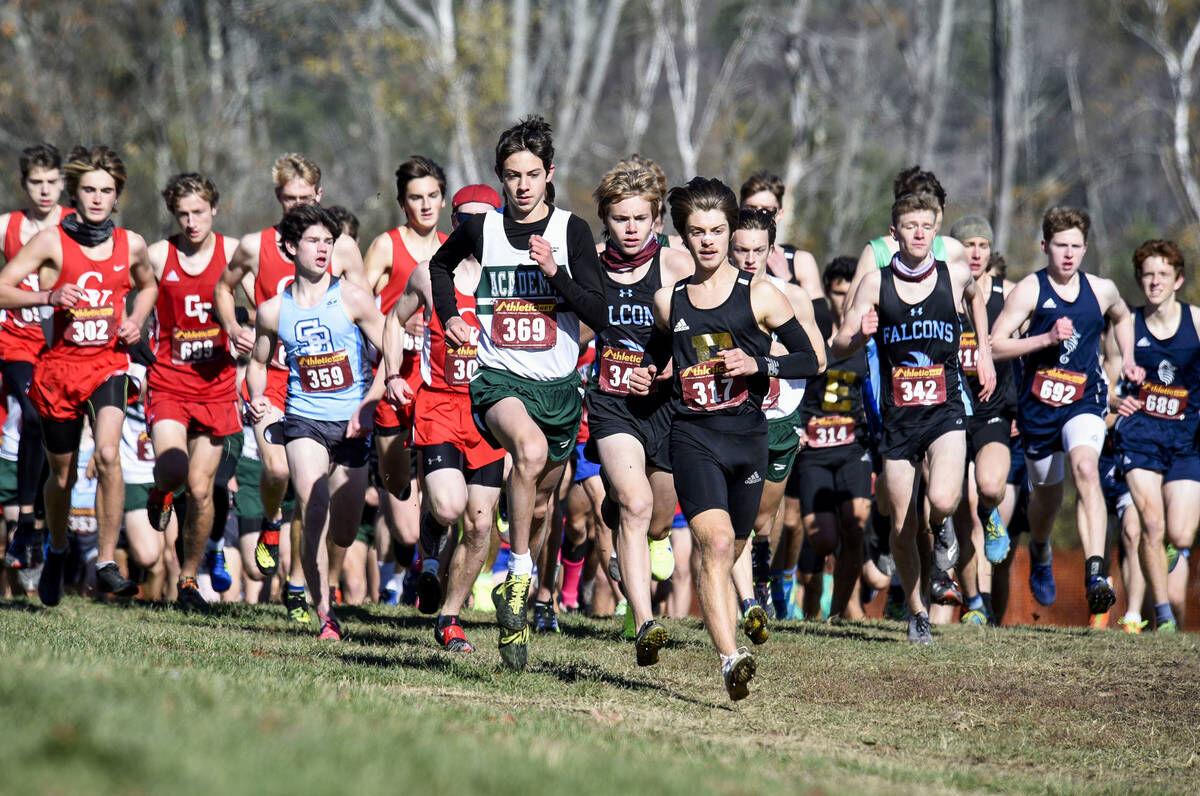 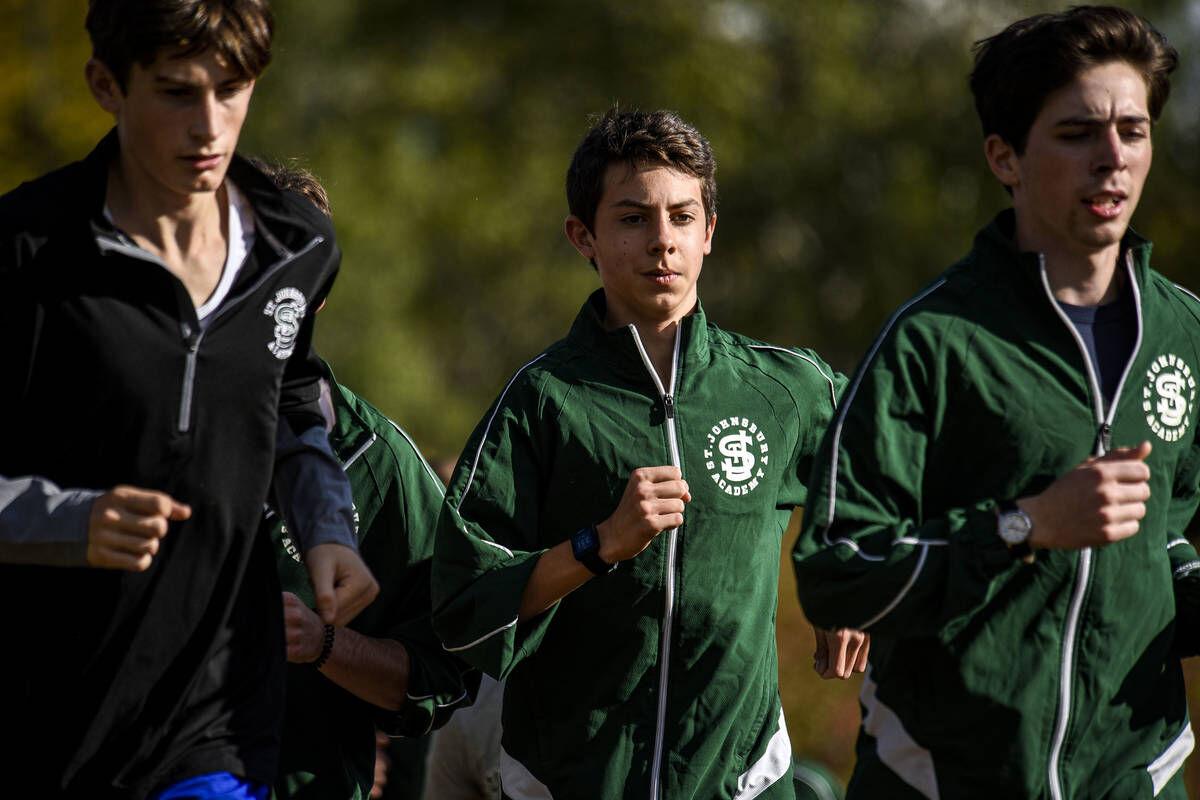 St. J Academy's Evan Thornton-Sherman (490), Braden Anthes, and Hale Boyden (489) take off from the start line with Cormac Leahy (500) and his Craftsbury teammates during the Hilltoppers' season-opening cross country race at Rankin Property on Thursday, Oct. 2020. It was the first race at the venue. Thornton-Sherman blazed the course in 16 minutes, 34 seconds. (Photo by Michael Beniash)

• Record Boys XC Runner of the Year for the third straight season.

• Won the Northern Vermont Athletic Conference league individual championship for the second straight season, leading the Hilltoppers to a long-awaited win over rival U-32 and the program’s first NVAC Mountain championship since 2011.

• Finished runner-up at the Division I state championship at Thetford Academy, pacing St. J to a second-place team finish.

• Turned in the state’s fastest times on every course he ran except at Thetford (second best).

“Evan made great strides as a team leader and he has an incredible work ethic and drive,” Chip Langmaid said. “He is still working on head-to-head racing tactics. He has always run fast, but we are still working on the confidence to control races when he can’t just run away from the competition. He may be the most complete talent I have coached on the boys side.”

This was the first year I was able to race at BFA’s course with my teammates and friends. Although COVID had a significant impact on our XC season, I was able to get to know other runners and coaches from across the state. The support I received from other teams and coaches such as U-32’s team, coach Tripp, BFAs team, coach Mashtare and CVU’s teams was very evident and appreciated.

The Meet of Champions. I hit the wall and finished a full minute slower than my previous time I had run a few weeks before on the same course. I just didn’t feel well that day and couldn’t achieve the mental mindset I needed.

Did You Attain Your Goals

No, I did not accomplish any of my goals this year, such as being state champion, but there is always next year.

I really enjoy incorporating other types of conditioning with Adrian Guyer at XIP in Lyndonville.

I was able to PR on a new course and we won NVAC league championships, beating U-32 for the first time in about a decade.

What Comes Next? Goals For Next Year

Unfortunately, it appears that we will not have an indoor track and field season, which means that I will be training for outdoor. I will also be running a couple of road races in order to keep myself in the racing mindset. My main goal for the next XC season is to win states, individually and as a team, and to break 15 minutes for a 5K on a XC course.

The Record’s Boys Cross Country Runners of the Year

Help us choose the Caledonian-Record's boys high school Athlete of the Week for the week of Jan. 18-24.

Help us choose the Caledonian-Record's girls high school Athlete of the Week for the week of Jan. 18-24.