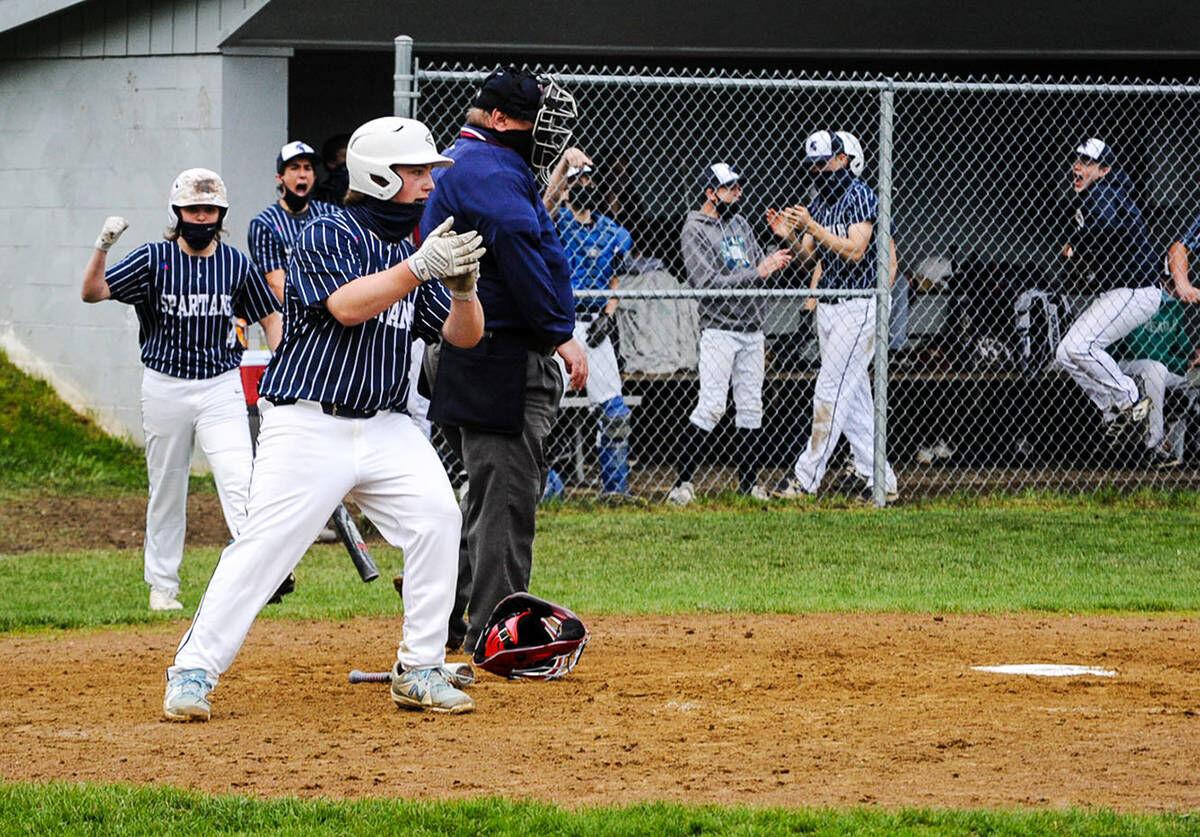 Karter Deming and his White Mountains teammates react after Deming scored the game's lone run in the Spartans' 1-0 victory over previously unbeaten Lin-Wood in Whitefield on Wednesday, May 12, 2021. (Photo by Arlene Allin) 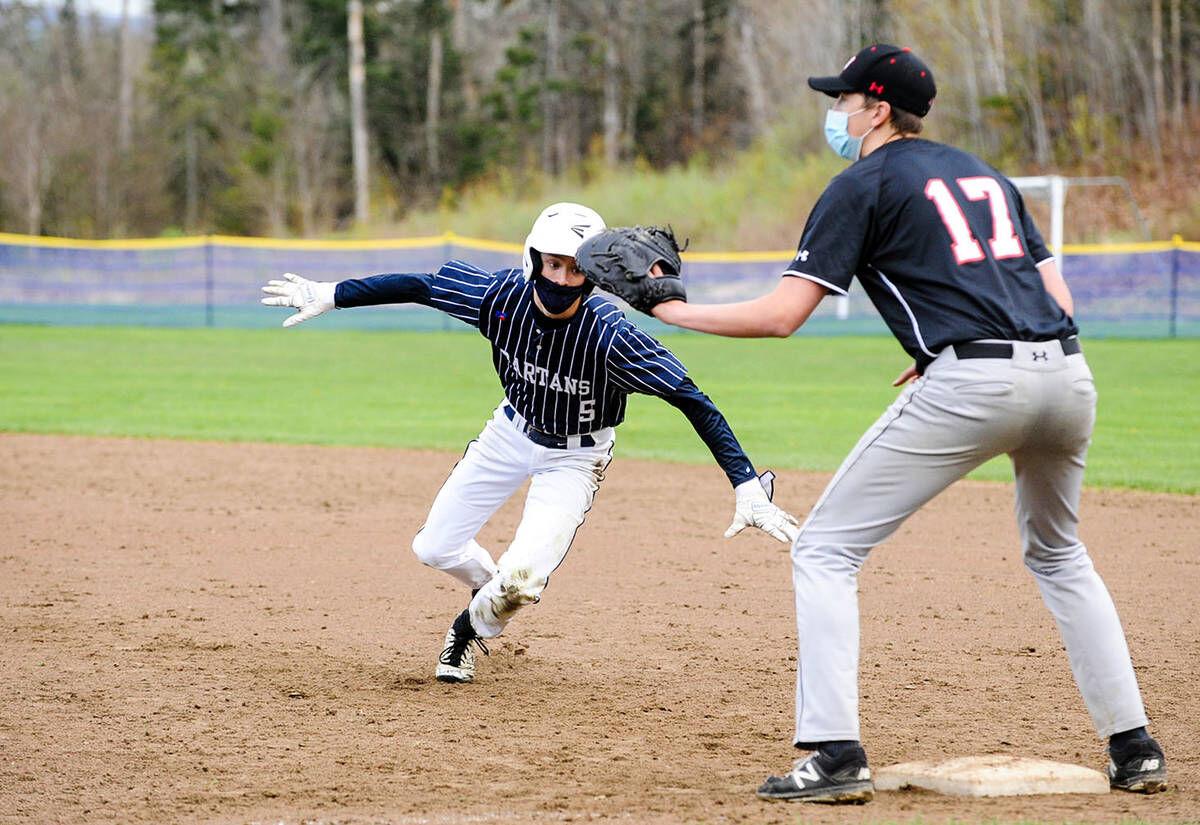 White Mountains' Brayden White dives back to first in the Spartans' 1-0 victory over previously unbeaten Lin-Wood in Whitefield on Wednesday, May 12, 2021. (Photo by Arlene Allin)

Karter Deming and his White Mountains teammates react after Deming scored the game's lone run in the Spartans' 1-0 victory over previously unbeaten Lin-Wood in Whitefield on Wednesday, May 12, 2021. (Photo by Arlene Allin)

White Mountains' Brayden White dives back to first in the Spartans' 1-0 victory over previously unbeaten Lin-Wood in Whitefield on Wednesday, May 12, 2021. (Photo by Arlene Allin)

WHITEFIELD — The pitching duo of Tyler Hicks and Karter Deming held Lin-Wood scoreless and hitless for a 1-0 win on Wednesday and combined with a timely hit, halted the Lumberjacks’ win streak at nine in a row. Deming had the line-drive double and scored the game-winner on a hard-hit ball by Braeden White in the sixth inning.

A pitching duel raged through five innings between Hicks and Jourdan Stevens. Hicks was impressive as he mowed down 14 of the 15 outs on strikes. Hicks did walk one in the first inning, but that lone Lumberjack to reach third base was picked off by WM catcher Brody LaBounty.

When the junior right-hander powered through 10 strikeouts in a row through the second, third and fourth plus one, he walked two in a row in the fifth. Coach Ben Hicks strode to the mound and settled his son. Tyler bore down, found the zone and the next two went down on strikeouts. Hicks’ fastball had flames and all four of his pitches were utilized effectively. The defense played flawlessly to back his effort.

Stevens was impressive too as 13 Spartans went down on strikes. Stevens had some jams to escape. In the third when Robert Breault reached on an infield bobble and LaBounty walked with two out, Stevens dug deep. Again in the third, a leadoff walk to Hicks and a dropped fly deep to center by Deming raised hopes that lost traction as Stevens fanned three in a row. Again in the fourth on free passes to LaBounty with a couple stolen bases over to third and Logan Ames went for naught.

Hicks retired for the final two innings and Deming immediately handled a bunt putout, then struck out four of the next five he faced. Keegan Nelson chased down a long ball in left that aided the cause.

“Pitchers win games,” said Hicks before the game and without a doubt the Spartans have pitchers. Two of the five used certainly flexed their muscle on this day.

Hicks credited both sides with strong pitching. “The whole game came down to the two hard-hit balls that came together.”

The third time that a Spartan made it to third base was the charm. Deming led off the sixth with that double to the fence in left-center then raced to third as the pickoff attempt went askew. White was at bat and nailed a liner that escaped the shortstop as Deming raced home. With two out and two on, Stevens retired and Jacob Morris handled the final two outs. Deming sealed the deal for the Regional.

Hicks added, “This was a great baseball game. We’re young with only two returning varsity starters and we start three or four freshmen every game.”

The Spartans will carry an 8-2 record to Woodsville on Friday.

COLEBROOK 5, PROFILE 3: In Bethlehem, Carson Rancourt went 2-for-3 with two runs scored as the Mohawks won their first game of the season. Teammate Kaiden Dowse had a double and Malik Boire went four innings for the win.

Tied 1-1 in the top of the fourth, Colebrook strung together two hits, a steal, and two bunts to push across three runs giving the Mohawks a lead they would not relinquish.

Jackson Glavac and Joey Huerter each went 2-for-3 for Profile, which seeks its own first win Friday at Littleton. Also Friday, Colebrook hosts Groveton.

NORTH COUNTRY 6, HARWOOD 0: In Newport, the Falcons swept to a 3-1 record going into their Friday match at Middlebury, also 3-1.