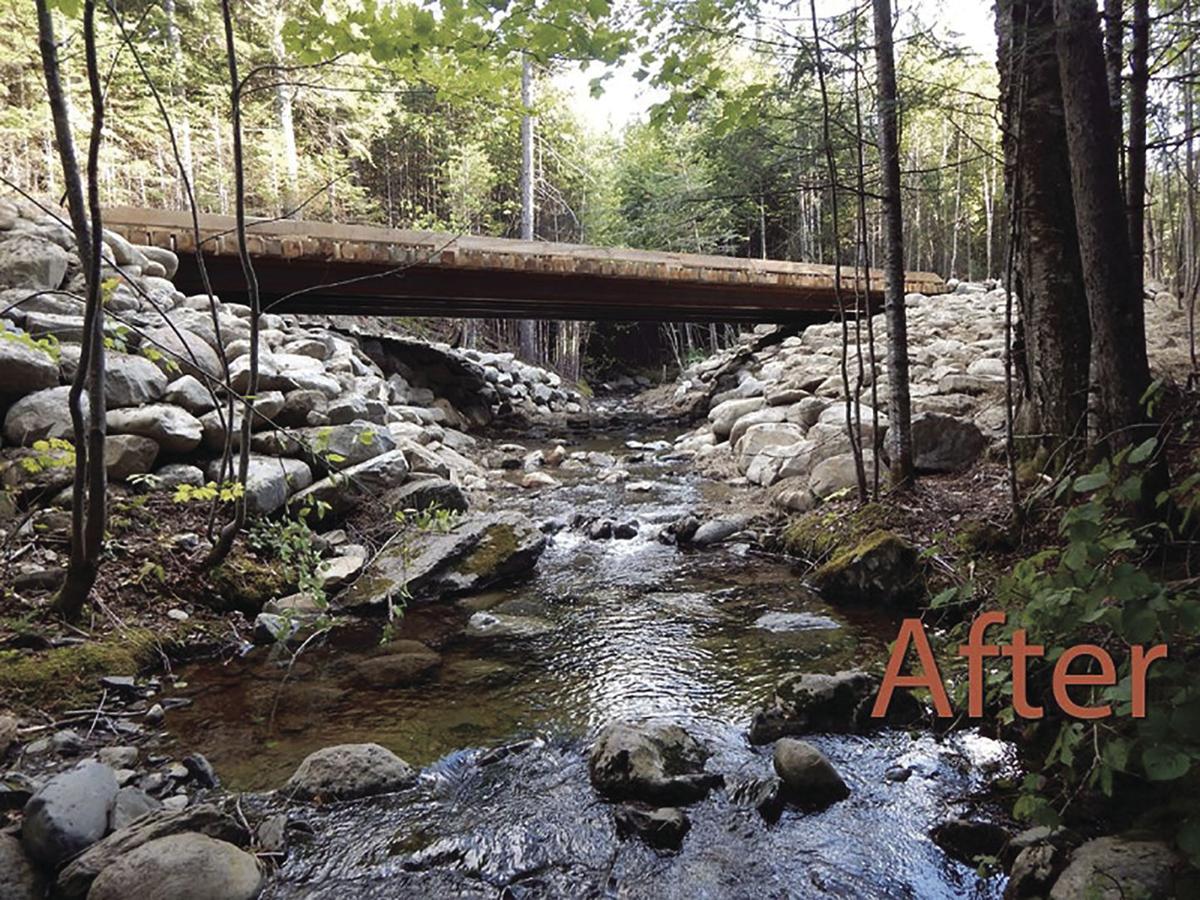 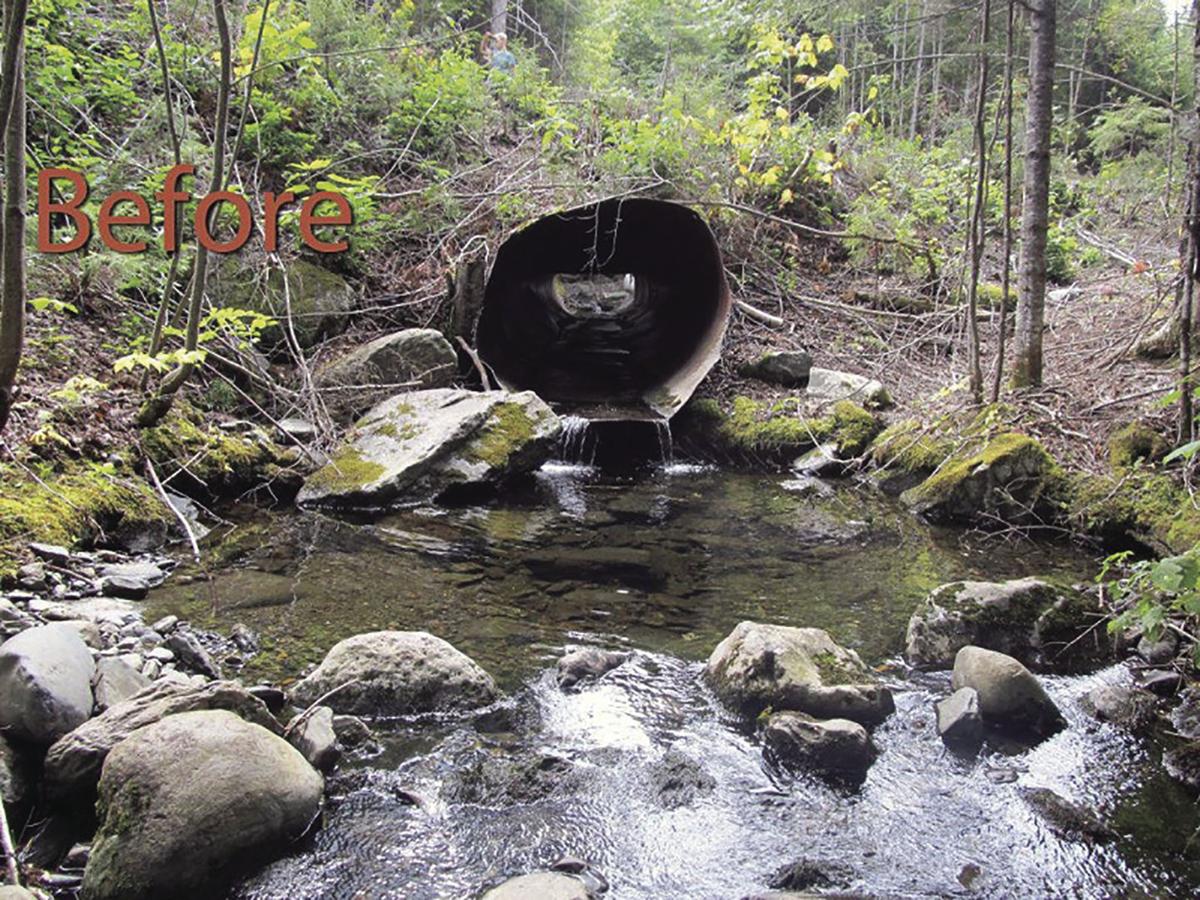 Wild brook trout evoke strong feelings among anglers and those who love unspoiled woods and waters. The places one can find wild brook trout are few and far between but thanks to the Appalachian Mountain Club’s Maine Woods Initiative they can be found in significant numbers in one of my favorite places, the Moosehead region of Maine.

Linda and I were in Maine the last few days of September with a group of fellow journalists. We were staying at the Appalachian Mountain Club’s Medawisla Lodge and Cabins located 26 miles northeast of Greenville and 8.5 miles from the Roach River and Kokadjo. We chose Medawisla because it offered end of season trout fishing and because we wanted to learn more about what the AMC has been doing to improve trout habitat.

We left Bradford in the morning and drove the 239 miles to Greenville arriving hungry and thirsty. The Stress Free Moose Pub solved both problems and soon we were on our way along the south shore of Moosehead to Kokadjo. From there it is all dirt road southeast to Medawisla Lodge & Cabins located on Second Roach Pond.

Medawisla is one of three lodges that are part of the Appalachian Mountain Club’s Maine Woods Initiative. The other two are Gorman Chairback and Little Lyford Ponds. I have stayed at both and found each had much to offer.

The AMC developed a strategy for land conservation in the 100-Mile Wilderness region that combines outdoor recreation, resource protection, sustainable forestry, and community partnerships. So far, the AMC has purchased and permanently conserved 75,000 acres of forest land, created over 130 miles of recreational trails, opened the sporting camps to the public, established an FSC-certified sustainable forestry operation, and developed a partnership with local Piscataquis County schools.

AMC recognizes that the wood products industry is one of the foundations of the local economy and will remain so for a long time. I applaud the AMC for integrating timber harvesting with wilderness-based recreation for the benefit of us all, locals and visitors alike.

Like many places in rural northern New England, the Greenville/Moosehead region has seen declining employment in the forest products sector leading to higher than average unemployment and poverty rates. The AMC “believes that a stable base of conserved lands will provide a key ingredient for the development and growth of the region’s nature-based tourism economy.”

We spent several hours one day with AMC’s Maine Woods Initiative Land Manager Steve Tatko who took us on a trout habitat enhancement tour after a brief powerpoint presentation at the lodge. Steve is a native of the area and a forester whose family owns forest land. He is invested in doing what is right for the land and the fish and wildlife for the long term. Unlike stock owned timber companies, the AMC is not out to turn a quick profit and has made its harvest plans accordingly. They have also set aside 27,000 acres as an ecological reserve.

Steve showed us several examples of the 46 miles of stream habitat restored so far. The $1.3 million invested in fish passage has resulted in 44 fish passage projects of which 27 were done with the NRCS and 17 funded by the AMC. Culverts that prevent fish passage are being removed and 29 bridges built in their place. In addition to the NRCS other partners include the USFWS, TU, Patagonia, Orvis and the Trout and Salmon Foundation. The result is wild trout benefit.

All of us on the tour are anglers whose affection for wild trout is strong. Thus as we visited site after site and saw photos of what was there before and saw what is there now we became more and more appreciative of the AMC and its Maine Woods Initiative.

Medawisla was completely rebuilt over a two year period and opened July 1 of 2017. It is off the grid but thanks to extensive solar panels and a generator, offers all the comforts of in town lodging minus the distraction of traffic and noise.

We chose our hilltop cabin because we had stayed in it the year before, soon after Medawisla opened, and loved it. It has electricity, running water and a flush toilet. There is no tv or radio and I hope there never is.

Medawisla is the Abenaki word for loon and that is the most common sound one hears evenings at the lodge.

Medawisla is an ideal place to canoe, kayak, hike or simply relax and read all of which our group did.

The food is plentiful, delicious and served family style in large quantities. Each meal, we met new people and enjoyed talking with them and sharing experiences, just as would have been the case had we been at one of Maine’s renowned sporting camps back in the 50s.

I would love to visit this winter for lodge-to-lodge skiing. One is met at a parking lot where baggage is handed over to AMC staff with snowmobiles and sleds. Guests don skis for the trek to one of the lodges where the baggage awaits. Following a night at one lodge the baggage is transported to another and to await the skiers.

For information about the lodges and the many options, go to: www.outdoors.org/mainelodges or call 207-358-5187. Linda and I may see you there.

The radio-collaring will be carried out primarily within Essex County by a professional contractor, Native Range, Inc. Fish and Wildlife reports that the capture could begin as early as January 10 depending on weather conditions. Capture efforts require flying just above tree height and are expected to take between 5 and 10 days.

Wildlife experts with Native Range will be using nets to capture moose from the helicopter and handling it without the use of tranquilizers. The processing of a captured moose is completed in minutes and is done using well-established wildlife handling techniques that minimize stress and harm to the animal. Ninety-six moose have already been captured using these methods thus far in the study.

Department staff having been tracking collared moose for the past two years using the GPS points gathered by the collars and have been visiting moose directly in the field to record observations. Vermont is the fourth northeastern state to partake in such a study. State fish and wildlife agencies in New Hampshire, Maine, and New York are currently using the same methods to examine their moose herds. The study will be completed at the end of 2019.

“Many local residents may have noticed these helicopters capturing moose in January of 2017 and 2018, but we felt all Essex County residents and landowners should once again be made aware of this activity,” said Cedric Alexander, Vermont Fish and Wildlife’s lead moose biologist. “Moose in the Northeast are facing a variety of threats ranging from a warming climate to increasing winter tick loads, and we appreciate the public’s support as we study how these factors are impacting Vermont’s moose population.”

Members of the public or landowners who have questions or concerns about the helicopter activities can call the St. Johnsbury district office at 802-751-0100. For more information, go to www.vtfishandwildlife.com.

Mark Breen reports in the Fairbanks Museum and Planetarium’s Skywatch Almanac that on January 13, 2018: “Severe winter weather started with a surge of warmth, reaching a record 61°F in Burlington, creating damaging ice-jam flooding in northwest VT, followed by 6 to 12 inches of snow west of the Green Mountains on the 14th. “

New Years Day saw some dedicated individuals hike to the summit of Mt. Moosilauke, something Don Kollisch and I have done for many years. This year we failed to make the annual climb as both had been under the weather. It was a tough decision we delayed making right up until New Year’s Eve when the weather reports were for high winds, freezing rain and sleet.

We couldn’t let the new year start without some outside exercise so we opted to make the much shorter hike up to the Gile Mountain fire tower in Norwich.

Looking to the northeast, Moosilauke was socked in and we could not even be sure where it was. To the south and east the sun mostly shone through the clouds so the views were quite good.

As the winds were blowing briskly, we didn’t linger as long as we would have liked, but long enough to scan the surrounding area with binoculars and toast the new year with a bit of champagne.

Several of our friends and other regulars did summit Moosilauke and I will have more to say about that next week.

My new book, Four Seasons in Vermont, can be purchased at local stores or ordered online at www.bondcliffbooks.com, on Amazon at www.amazon.com or for a signed copy by sending a check for $17.95 to cover the cost of the book, postage and handling to: Gary W Moore, Box 454, Bradford, VT 05033.

Syndicated columnist Gary W. Moore may be reached by e-mail at gwmoore1946@myfairpoint.net or at Box 454, Bradford, VT 05033.

Help us choose the Caledonian-Record's boys high school Athlete of the Week for the week of Jan. 18-24.

Help us choose the Caledonian-Record's girls high school Athlete of the Week for the week of Jan. 18-24.